Australia need to be more consistent if they are to challenge the best rugby teams in the world, according to returning centre Samu Kerevi.

Australia are in Japan for the third Bledisloe Cup clash against New Zealand on Saturday with the All Blacks having already wrapped up the annual series 2-0 after wins in Sydney and Auckland.

The Wallabies will, however, look to build momentum for next year’s World Cup with a victory in Tokyo. 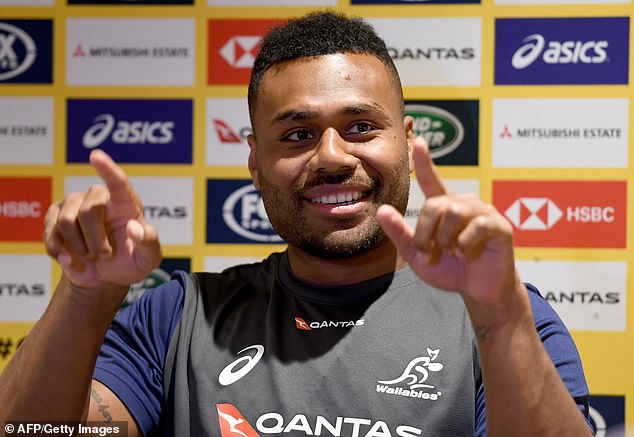 Australia need to be more consistent, according to returning centre Samu Kerevi

Kerevi, 25, is making a return to the Australian squad, having missed the last six games with a bicep injury sustained in June. The Wallabies have lost four times in his absence.

‘It has been really hard to watch from the sidelines,’ Kerevi said in Tokyo on Tuesday. ‘Consistency with results is the biggest thing for us and this consistency is something we want to improve over this five-week tour.’

Australia’s rankings has dropped to number seven in the world and they know they must improve in the coming weeks, with matches against Wales, Italy and England to come after the Bledisloe clash.

Kerevi wanted his side to lay down a marker in Japan, who host the 2019 Rugby World Cup in less than a year.

‘This weekend will be a big game, here in Japan with the World Cup not too far away so hopefully it is a rehearsal,’ the Queensland Reds centre said.

‘For us it is about being consistent in training and doing the little things so when we do come up against the best in the world then we have prepared and ticked all the boxes.’

World's first monkey-pig hybrids are born in Chinese lab
Kevin Hart recovering from surgery after suffering 'major' back injury in late night horror crash
MPs attack bosses of disabled car scheme for hushing up a £2.2million bonus for their CEO
Gemma Collins lashes out at fellow traveller on economy flight
Iran dismisses prospect of war with US as warning made to commercial airliners in the Persian Gulf
Mother, 41, has 'lost her smile' after a brain tumour caused the nerves in her face to 'shut down'
Meghan Markle's mother Doria Ragland flicks through her mail on Christmas day in Los Angeles
Veteran broadcaster Ken Bruce reveals he's only had one sick day in nearly 40 years at the BBC