Bath put out their B team for the toughest game of the season and, for Saracens, the victory was a beauty parade.

Only Francois Louw, Semesa Rokoduguni and Charlie Ewels are certain starters in Bath’s strongest XV and the West Country side were fortunate not to lose by more. They had thrown in the towel before they left Somerset, and who can blame them? 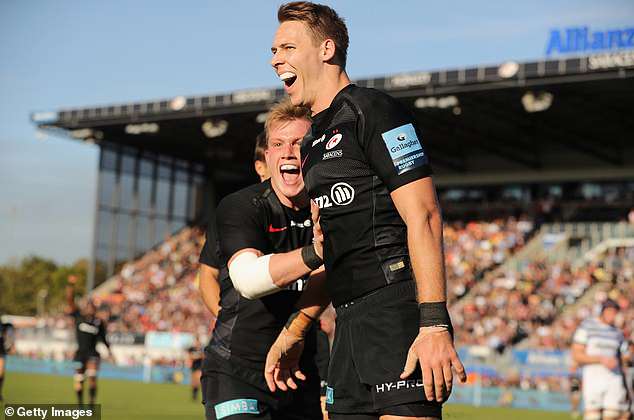 Joe Marler has retired from the international arena at the age of 28 and Wasps, too, rested star players on Friday night.

As the authorities blunder their way towards managing player workloads, weakened teams are in danger of becoming commonplace. Blackadder admitted his side were only targeting a losing bonus point, but they didn’t even get that. His reserves were ripped apart by Alex Goode and sunk by a Liam Williams hat-trick.

‘I stand by the decision,’ said the defiant Bath coach. ‘We’re doing the best thing for our team and our players. I’d rather bring these youngsters out to play against the best — otherwise we’ll just end up playing our best team every single week and we’ll end up breaking guys. That’s not the way forward.’ 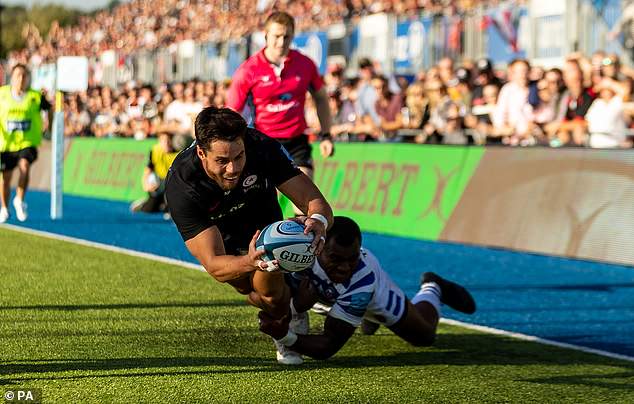 Saracens, however, have the depth to manage. Goode made line-break after line-break, in what Mark McCall described as one of his best performances of the decade. McCall said: ‘That was as good a performance as he’s put in for us. He was incredible. He still wants to play for England — that’s the one thing you need to know.’

The hosts got the four-try bonus point inside 38 minutes. Williams, Goode, Jamie George and Nick Tompkins all scored but they should have had six tries by half time.

Instead, Bath trailed 26-20 thanks to opportunistic efforts from Chris Cook and Tom Homer — and the boot of Rhys Priestland. Williams quickly secured his hat-trick and Homer’s interception was the only response to further scores by Sean Maitland and Chris Tolofua.

By full-time, Saracens had made it 25 points from 25 in the Premiership — and it was no surprise to anyone.

Prison battle between rival gangs leaves at least 52 dead in Brazil jail
Meghan Markle is mom-shamed over how she holds baby Archie
British 'hero' hacker pleads guilty to US hacking charges
Romanians protest in fury after police took 19 HOURS to respond to abducted schoolgirl's plea
Ohio child tests positive for methamphetamine as recovered-addict parents blame trick-or-treating
Ivanka Trump arrives at Westminster Abbey modeling a white fascinator
New book claims little-known safety rule may have doomed the Titanic and the 1,500 on board
13-platform Japanese home showing off EVERYTHING in the house at once sits in unassuming steel box