The Saudi 18-year-old girl who fled her family fearing they would kill her after she rejected Islam has arrived in Toronto.

Rahaf Mohammed al-Qunun garnered support around the world this week as people learned how she had barricaded herself in a Bangkok airport hotel room to resist being sent home to her family.

Her family deny any abuse, but Ms al-Qunun refused to meet her father and brother who arrived in Thailand to try and fetch the teen.

Instead, she took a Korean Air flight from Bangkok to Seoul on Friday and then a connecting flight to Toronto. 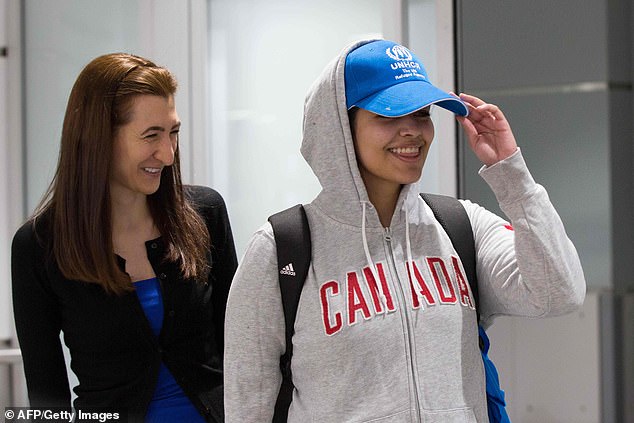 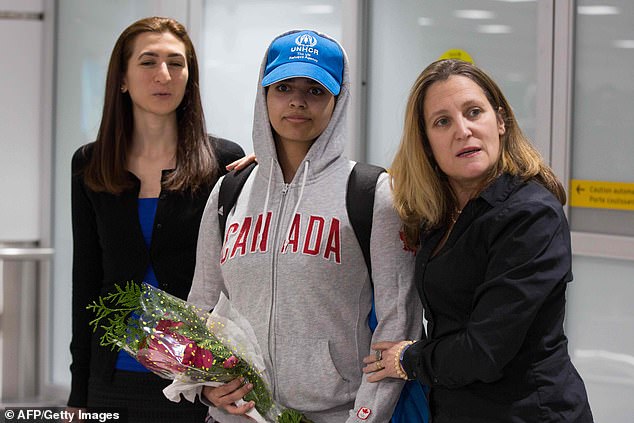 She was pictured wearing a UN Human Rights cap and ‘CANADA’ hoodie as she was met by officials. Canadian Minister for Foreign Affairs Chrystia Freeland is pictured right 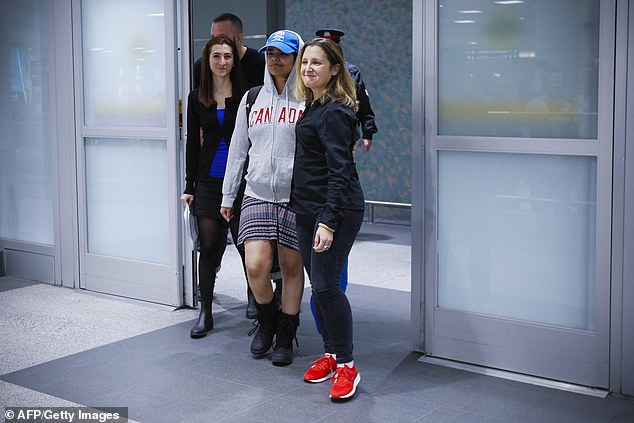 Foreign Minister Chrystia Freeland greeted al-Qunun, after she landed in Toronto, wearing a blue ball cap and a gray hoodie emblazoned in red with the word ‘CANADA.’

Ms Freeland told reporters with her arm around the teen: ‘This is Rahaf Mohammed al-Qunun a very brave new Canadian.’ 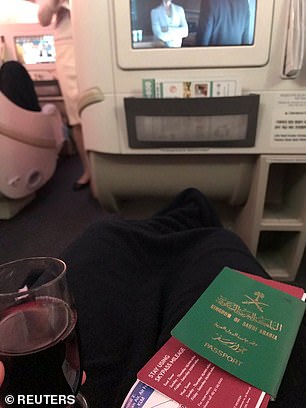 Her case was expedited after it garnered an unprecedented amount of media attention.

She highlighted her homeland’s strict social rules, including a requirement that women have the permission of a male chaperone to travel, which rights groups say can trap women and girls as prisoners of abusive families.

‘Canada has been unequivocal that we’ll stand up for human rights and women’s rights around the world,’ Prime Minister Justin Trudeau said.

‘When the United Nations made a request of us that we grant Ms al-Qunun’s asylum, we accepted.’

Canada’s ambassador saw her off at the airport, Thai Police Major General Surachate Hakparn said, adding that she looked happy and healthy. ‘She chose Canada. It’s her personal decision,’ he said.

Ms al-Qunun is the daughter of a Saudi governor and has nine siblings. She used a loophole in the state’s tough laws to travel to Kuwait unaccompanied.

From there, she purchased a ticket to Bangkok and was hoping to seek asylum in Canada, the United States, Australia, the UK or ‘any nation would protect her from being harmed or killed by her family’.

Instead, her passport was seized by a Saudi diplomat and she was forced to lock herself in an apartment room.

She says she spent months planning her escape before implementing her dangerous plan on January 5. 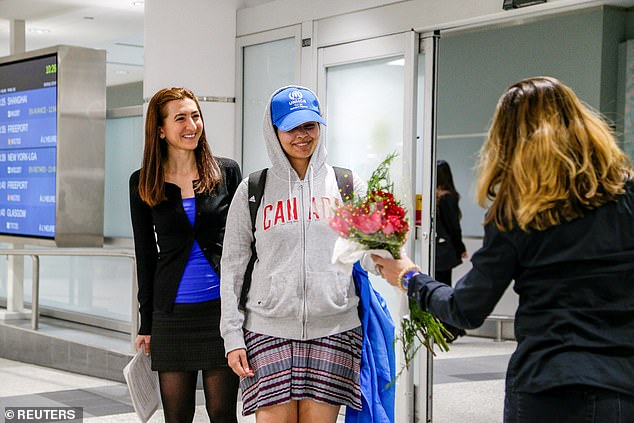 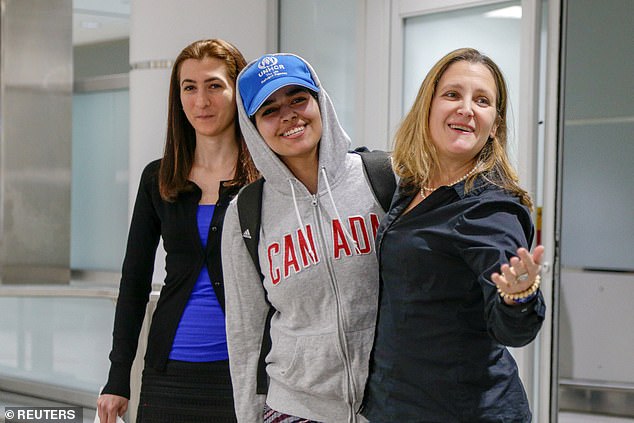 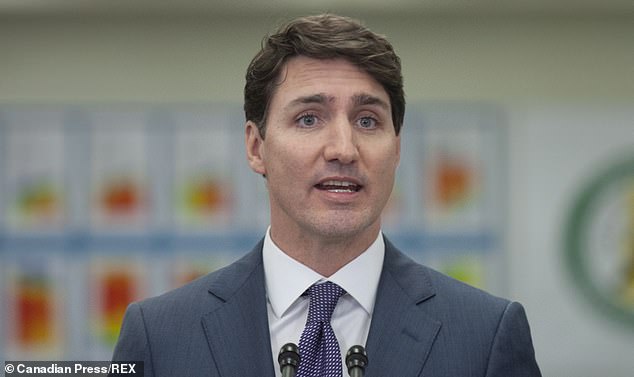 ‘Canada has been unequivocal that we’ll stand up for human rights and women’s rights around the world,’ Prime Minister Justin Trudeau (pictured) said 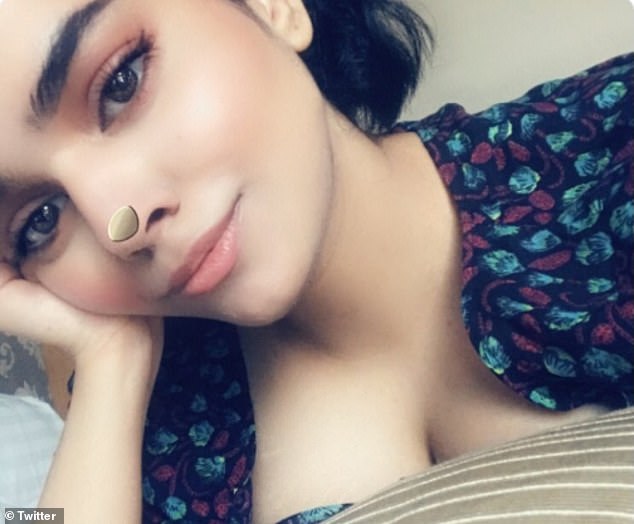 Ms al-Qunun (pictured) previously reacted to news Australia was considering granting her asylum, saying, ‘Is it true??? Australia wants me to go there??? I’m so happy’

Her dire situation was compared to that of Dina Ali Lasloom, a 24-year-old woman who sought asylum under similar circumstances at Manila airport in April of 2017.

She pleaded for help but was ultimately forced back on a plane home – kicking and screaming – and has never been heard from since.

After pleading with just 24 followers, her plight was picked up by numerous figures around the world who shared her story to their followers. 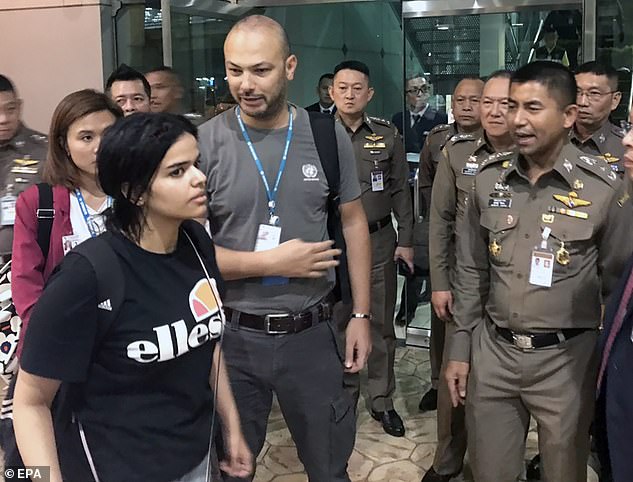 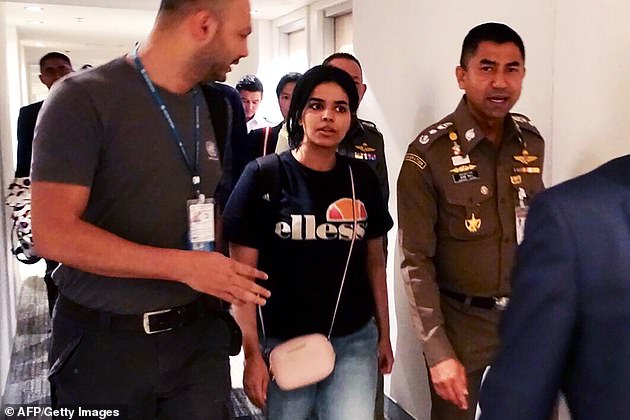 Ms al-Qunun pictured with Thai authorities after she escaped her family, who deny her allegations

She made headlines earlier this week after she began tweeting from the transit area of Bangkok airport, saying her life would be in danger if she returned to Kuwait.

Thai authorities eventually allowed her to enter the country on Monday evening and the UN refugee agency referred Ms al-Qunun to Australia for consideration for refugee resettlement.

The U.N. High Commissioner for Refugees granted her refugee status on Wednesday.

Despite having harnessed the power of Twitter to stave off deportation on Friday, she abruptly suspended her account, with friends saying she had received death threats. 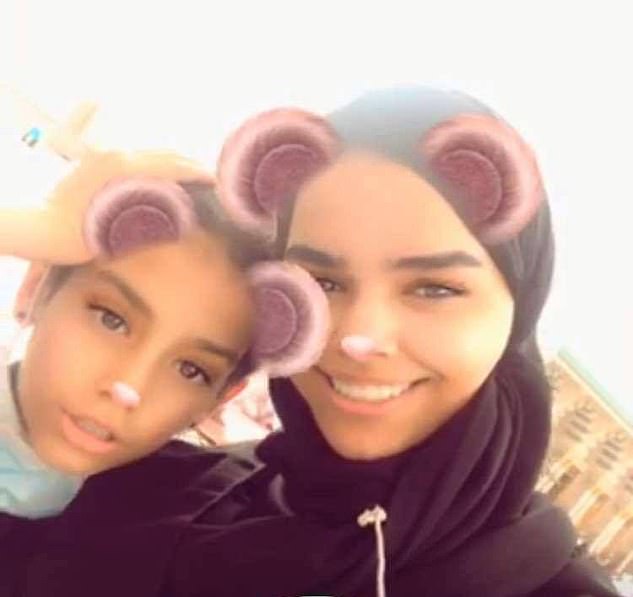 The 18-year-old was detained in Thailand following her arrival in the country. She is pictured having barricaded herself in an airport hotel room in a bid to avoid deportation

She also opened up about living with her family in Saudi Arabia, describing it as difficult as she had no freedom.

‘It was so bad. I mean, of course there are good days but they hurt me a lot.

‘I have no choice to choose what I want,’ she said.

The 18-year-old even rallied against online trolls who were spreading rumours on social media that she was lying about her situation.

‘I want life. I want to be independent. How can they say this just because I do something they don’t like?

‘I want to become a strong woman, I want freedom of expression, of religion and politics. I want to live a normal life.’

Ms al-Qunun also claimed her family would kill her if she were sent home to Saudi Arabia, where she has renounced Islam and ‘rebelled’ against her father.