Clashes between rival groups in Glasgow today were not related to a Black Lives Matter protest, say police in an astonishing claim, despite hundreds of protesters gathering and forcing a BLM demonstration to be called off.

The groups were seen throwing missiles at each other near the city’s George Square, over the heads of police officers in riot gear.

BLM supporters had intended to gather in the square to campaign for the removal of a statue of former Prime Minister Sir Robert Peel.

However, they were unable to gain access to it after clashing with hundreds of counter-demonstrators, organised by the far-right Loyalist Defence League, who rushed to the scene to ‘defend’ the monument.

Organisers of the ‘Peel must fall’ campaign, run by the Glasgow Youth Art Collective, said they were forced to abandon the protest after claiming that they couldn’t access the square and activists were being ‘targeted’ by police.

Other clips showed a far-right mob clashing with police, with one officer seemingly surrounded and pulled to the ground.

Despite the comments, and the hundreds of statue defenders, Police Scotland remarkably claimed that the clashes were not linked to a BLM gathering. 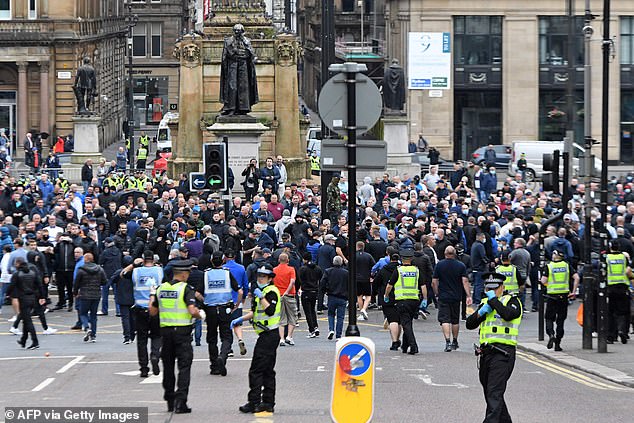 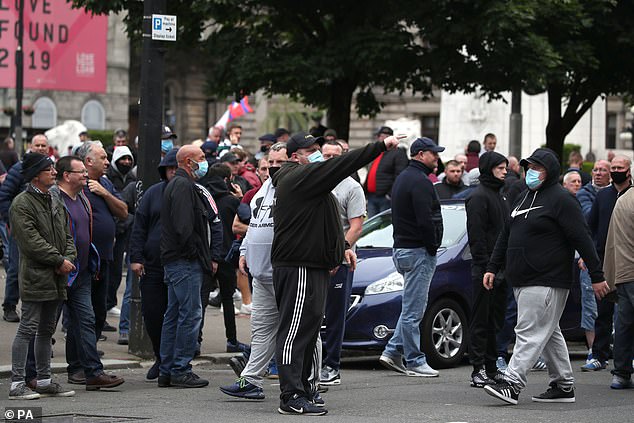 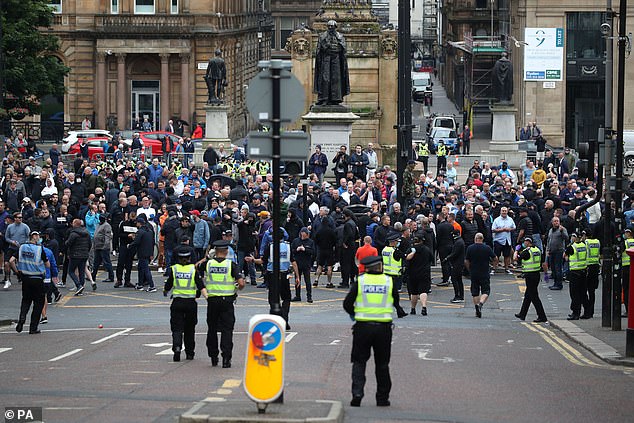 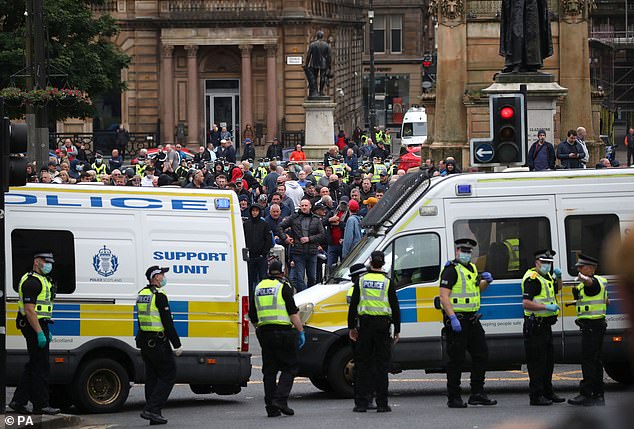 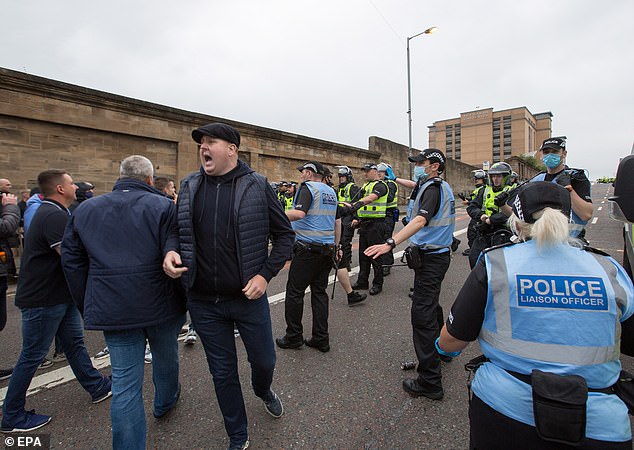 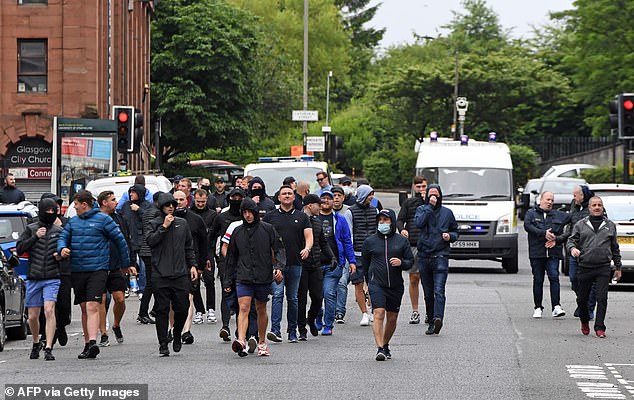 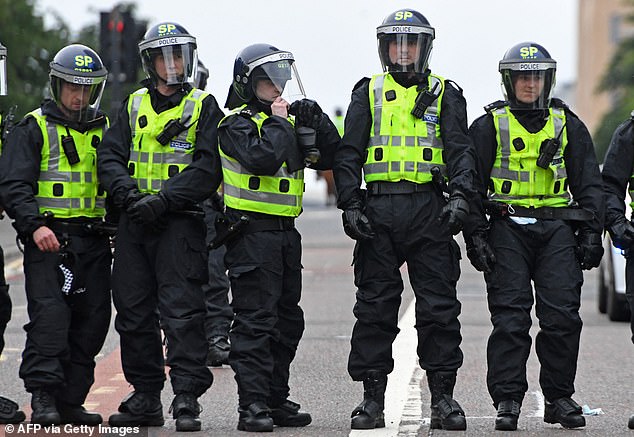 A line of riot police stand across a main road in central Glasgow. The BLM protest was called off amid the large loyalist presence

‘At this time the incident does not appear to be connected to a Black Lives Matter protest.’

Who was Sir Robert Peel?

Sir Robert Peel (1788 – 1850), served twice as Prime Minister of the United Kingdom and is regarded as the father of modern British policing having founded the Metropolitan Police Service.

He is also a founder of the The Conservative Party.

Black Lives Matter activists have targeted statues of the former Prime Minister due to his father’s involvement with the slave trade. A petition to remove Peel’s statue in central Manchester was started by Sami Pinarbasi, who said Sir Robert is a ‘icon of hate and racism’.

His father Sir Robert Peel, 1st Baronet, (1750 – 1830), was a British politician, industrialist and textile manufacturer. He amassed wealth through industry and became one of ten known British millionaires in 1799. However to ‘protect the cotton industry’ in Manchester Peel petitioned against the Foreign Slave Trade Abolition Bill.

The original protest was cancelled by Glasgow Youth Art Collective after it claimed it could not access George Square and ‘police targeting activists’.

A group of those looking to see the statue removed were being escorted down North Hanover Street in the city when they overtook the police escort and began running towards George Square.

Hundreds of counter-protesters began running towards the group before police were able to get in between the two.

Missiles could be seen flying between the two groups as police – with their batons drawn – formed a line across the street.

Those looking to see the statue removed were forced back up North Hanover Street by police.

A police helicopter was deployed and could be seen flying over the city centre.

Though Glasgow’s Black Lives Matter protest was cancelled, the one in Leeds went ahead.

In Leeds city centre, around 1,000 men, women and children gathered in Millennium Square for a protest organised jointly by Black Lives Matter and Black Voices Matter.

Many held placards and cheered and applauded as the protest officially began at 2.30pm. Another couple of hundred protesters stood around the city’s war memorial, approximately 0.2 miles away on The Headrow.

Police vans lined the surrounding streets and officers stood in pairs around each protest.

Dionne Edwards, from Black Voices Matter, said: ‘Our rally is a peaceful protest. We do not condone damage to public or private property. We simply want to raise a call for our voices of pain to be heard – and to be heard loudly.

‘We will no longer be silenced from fear.’ 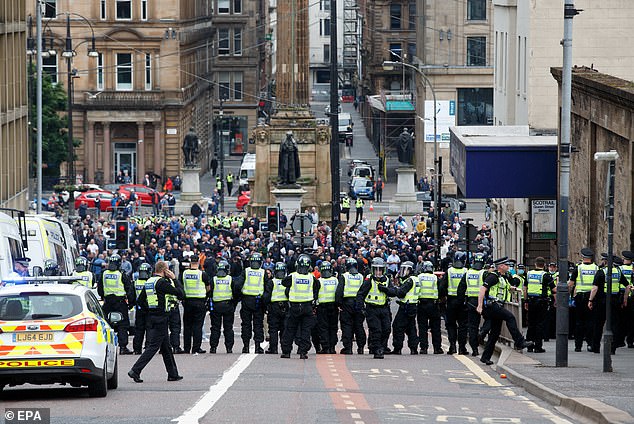 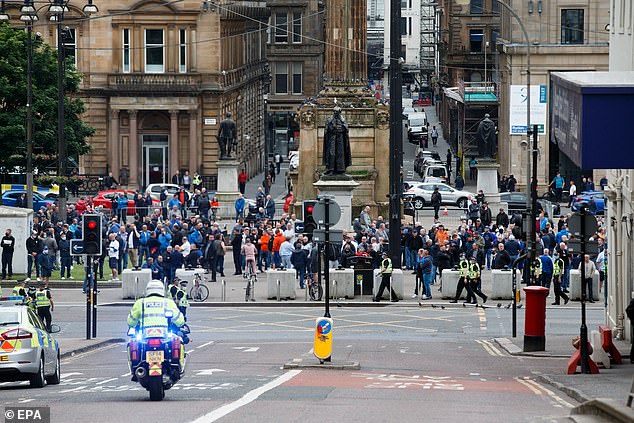 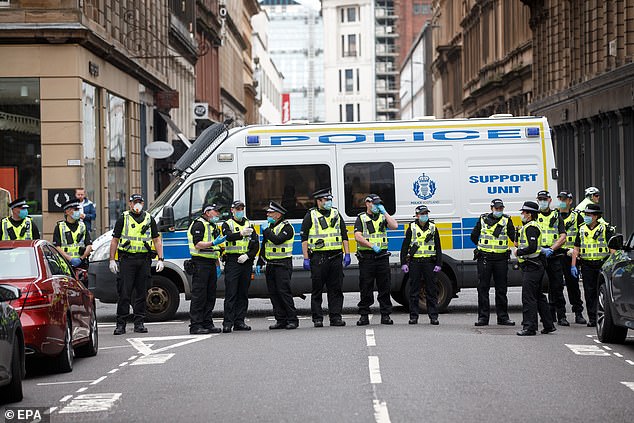 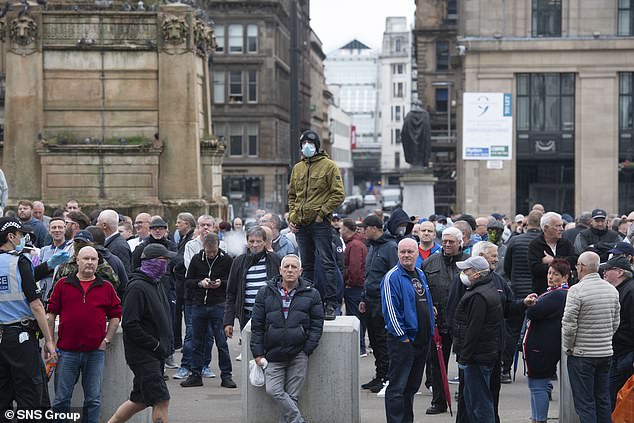 Crowds gather at the Robert Peel Statue in George Square, ahead of a Black Lives Matter protest calling for its removal 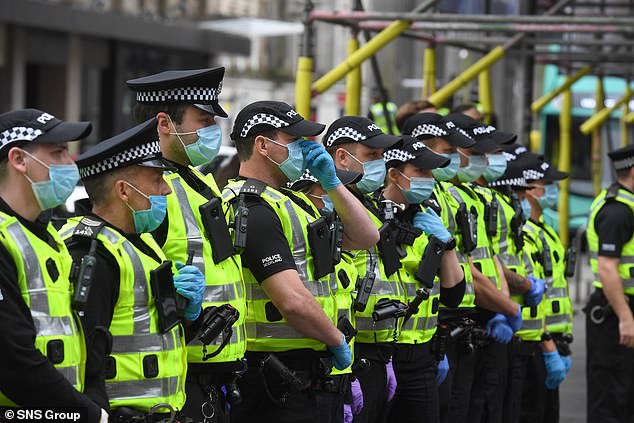 Police try to control crowds that have gathered at the Robert Peel Statue in George Square, Glasgow

Yesterday, clashes between far-right yobs, Black Lives Matter supporters and riot police erupted in Trafalgar Square and at Waterloo station, with the far-right demonstrators claiming to be protecting Churchill’s monument.

Police chiefs imposed a 5pm curfew on all demonstrations in a bid to quell the unrest seen throughout the day as the anti-racist rally and a far right counter-protest descended into hooliganism driven by a hard core of violent activists.

Boris Johnson spoke out against what he described as the ‘racist thuggery’ seen during demonstrations yesterday after facing criticism for his response to the unrest this week.

The Prime Minister, who urged protesters to avoid the demonstrations all together – wrote on Twitter: ‘Racist thuggery has no place on our streets. Anyone attacking the police will be met with full force of the law.

‘These marches and protests have been subverted by violence and breach current guidelines. Racism has no part in the UK and we must work together to make that a reality.’

Met Police confirmed that more than 100 people were arrested during yesterday’s protest for offences including breach of the peace, violent disorder, assault on officers, possession of an offensive weapon, possession of class A drugs, and drunk and disorder.

At least 21 die in fresh violent rallies in Iraq
Feline on fleek! Cat has an army of Instagram followers thanks to his hilarious white eyebrows
Emma Stone admits she felt 'gloomy' turning 30 as she covers British Vogue
Boris Johnson and girlfriend Carrie Symonds are staying in £20,000 a week villa in Mustique
Dancing On Ice: Perri Kiely earns the highest score of the series as Kevin Kilbane is eliminated
Boris Johnson on course to win a 48 seat majority as Tories launch manifesto
Britain's earliest ever BUNNY lived in 1AD and was found buried at a Roman palace in Sussex
Coronation Street fans praise Maureen Lipman's 'hilarious' battleaxe Evelyn Plummer