Seven people have been injured in a ‘slashing attack during a fight at a London restaurant.

Paramedics have said seven people have been treated for injuries after the incident at The Broadway, in Southall today.

Police were called at around 11am this morning and found a man in his 20s with slash injuries. 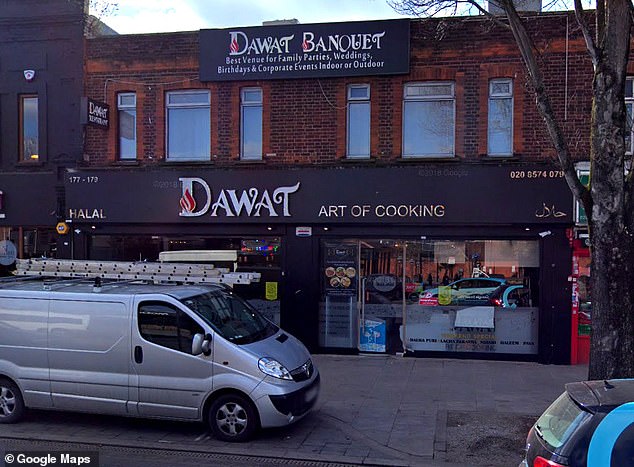 A police cordon has currently closed off the area around Dawat restaurant (pictured), Steakout and an area near Mirch Massala. It is not clear in which restaurant the incident occurred

The incident is believed to have involved two groups of people.

A spokesman for the police said: ‘Officers are in Southall Broadway following calls at around 11.10am to an assault in a restaurant.

‘At this early stage, we believe two groups were involved. One male (aged in his 20s) has been taken to hospital suffering a slash injury.

Michael Gove 'backed May after hearing UK would run out of drinking water within DAYS of No Deal'
So much for family 'rule' cited by Prince Andrew that one parent was always at home
Lance Corporal who accidentally shot best friend dead had been seen 'posing with gun like a rapper'
Islamophobia has plummeted in Liverpool since Egyptian footballer Mo Salah signed, researchers say
Police hunt for 'delivery driver' sex attacker after six assaults on women
Trump: Caravan has 'criminals and unknown Middle Easterners mixed in'
This Morning viewers mock singleton Theresa Mahon's wedding plans
Mother transforms son's bedroom into a fire station themed haven