Counter-terror police have today shut down Manchester’s Arndale shopping centre after four people were stabbed by a man who was sprinting around ‘lunging at people with a knife’.

Shoppers ran for cover and barricaded themselves into stores after a man reportedly shouted racist abuse at staff and swung a knife at random victims near a Starbucks cafe at the city centre mall.

Police with tasers held a suspect in the street outside and armed officers quickly flooded the area. A man in his 40s is now being questioned by anti-terror officers on suspicion of serious assault.

One shopper described the ‘nightmare’ of seeing the knifeman plunging his blade into the back of one victim as he walked past Starbucks. Photos of the crime scene showed the tables were overturned and some where covered in blood.

A witness said: ‘I heard a woman scream. I span around and saw this guy who had a knife in his hand. It looked like he had stabbed her back. There was blood pouring from her and she just fell to the floor.

‘As soon as I saw the knife I just ran as fast as I could and was warning others what happened. Everyone was looking down from the first floor and there was real panic, people screaming.

‘The police were there in minutes and then we were evacuated. It was like a nightmare. Like something out of a horror film. It was awful. I can’t get that image out of my head.’

Three women, one aged 19, another in her 40s and another whose age is unknown, and a man in his 50s, are among the injured. One of those injured was said to have serious injuries. Two are in a stable condition in hospital. Another was treated at the scene.

Police are investigating whether this was a ‘lone wolf’ terror attack, the Manchester Evening News reported. The nature of the incident has led to counter-terror detectives taking charge and the investigation is said to centre on what the man said during the attack. 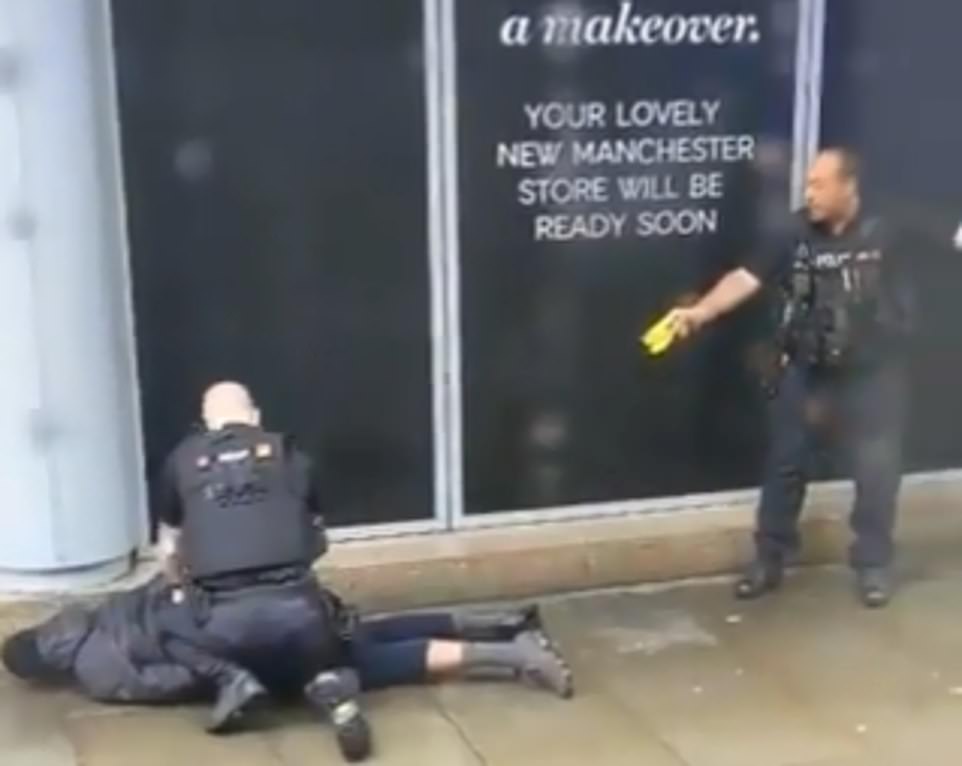 Footage recorded by a bus passenger shows one police officer handcuffing a suspect on the pavement outside, after another policeman stunned him with a Taser. 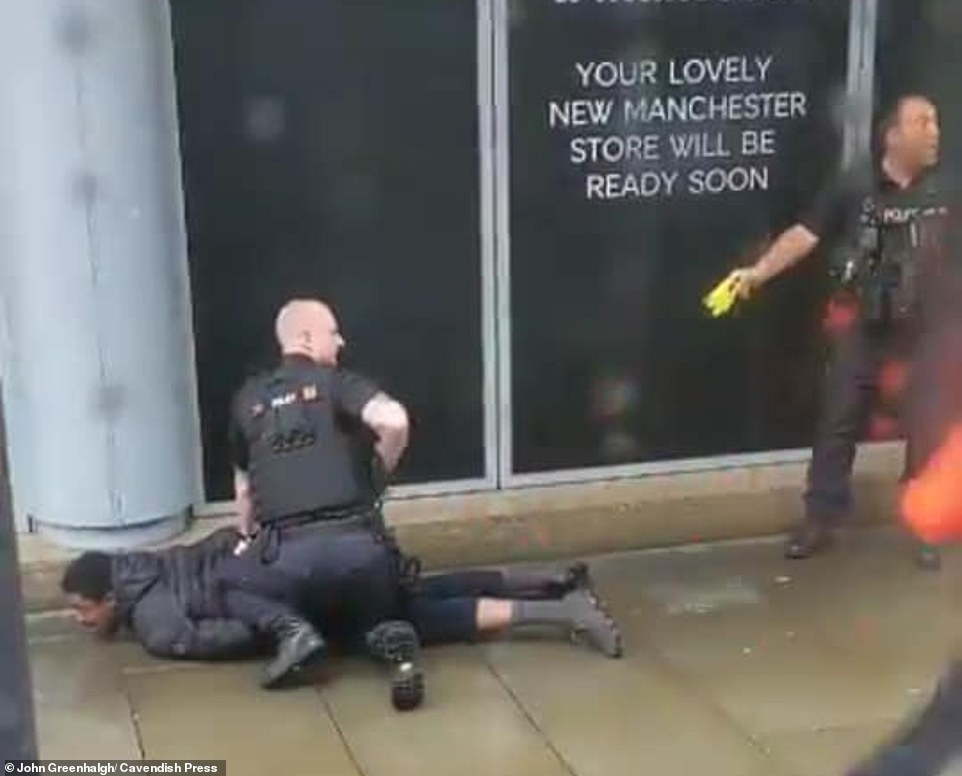 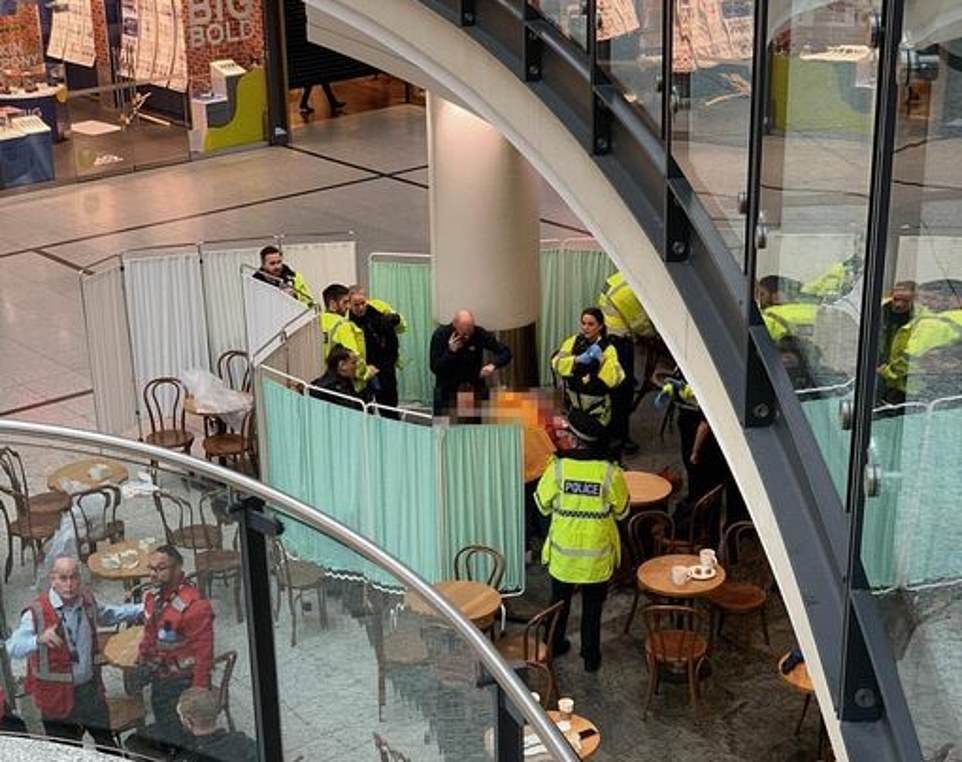 A photo from inside the centre shows police and paramedics outside a Starbucks cafe. A shop worker said the knifeman was ‘lunging at people’ as he ran past shops 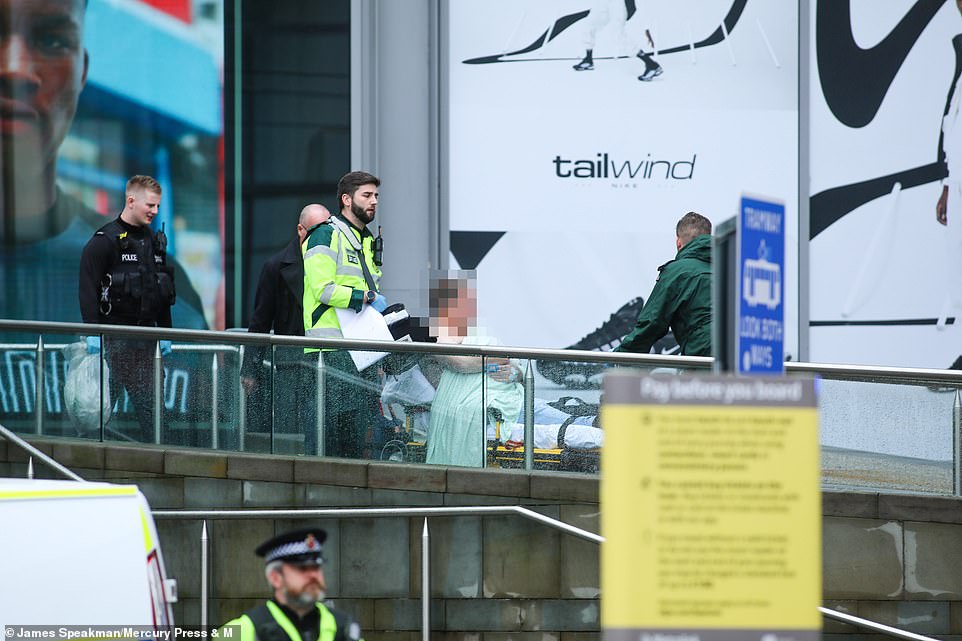 Pictures from the scene show three conscious victims – two women and a man – being wheeled out of the shopping centre, sitting up on stretchers. The condition of the other two victims is unclear.

A photo from inside the centre shows paramedics and police dealing with a victim at a table outside a Starbucks coffee shop inside the mall.

Shopper Freddie Houlder, 22, was in the centre when he heard ‘a load of screams just outside’ the store he was in. He said a woman then came into the shop and told others ‘a guy just ran past the shop and tried to stab me’.

Mr Houlder added: ‘Luckily she had quite a thick jacket – she thought originally it was a fake knife because of how easily it grazed off but police came in and said it was a real knife and she burst into tears. She was so lucky she was wearing a thick jacket… he was running around going for as many people as possible.’

He added: ‘I definitely don’t think it was gang violence because this guy was going around trying to stab random people, I believe,’ he added.

Another store worker caught in the chaos said: ‘A man was running around with a knife lunging at multiple people, one of which came into my store visibly shaken with a small graze. Soon after, security staff told all retail staff to close their doors and move the public to the back of the stores.’

Shopper Janet Loudon, 21, said: ‘I came out of work and saw a black man shouting racial slurs like ‘n****r’ and being very hostile towards an Arndale worker, who was also black.

‘I carried on walking but saw police run inside the Arndale and heard someone shout ‘knife’ and another shout ‘bomb’ – I was frantically looking for my friend.

‘That was when I heard that people had been stabbed and everyone was panicking and frantic. We saw a victim slouched between an ATM which was a horrific sight and she was taken away to be helped.’

She added: ‘It wasn’t clear what the man was saying but he was swearing and telling the public “I’m going to f*** you up” repeatedly and he got more and more agitated. He was pointing at the police and Arndale workers and saying things like “just because I’m a n****”.’ 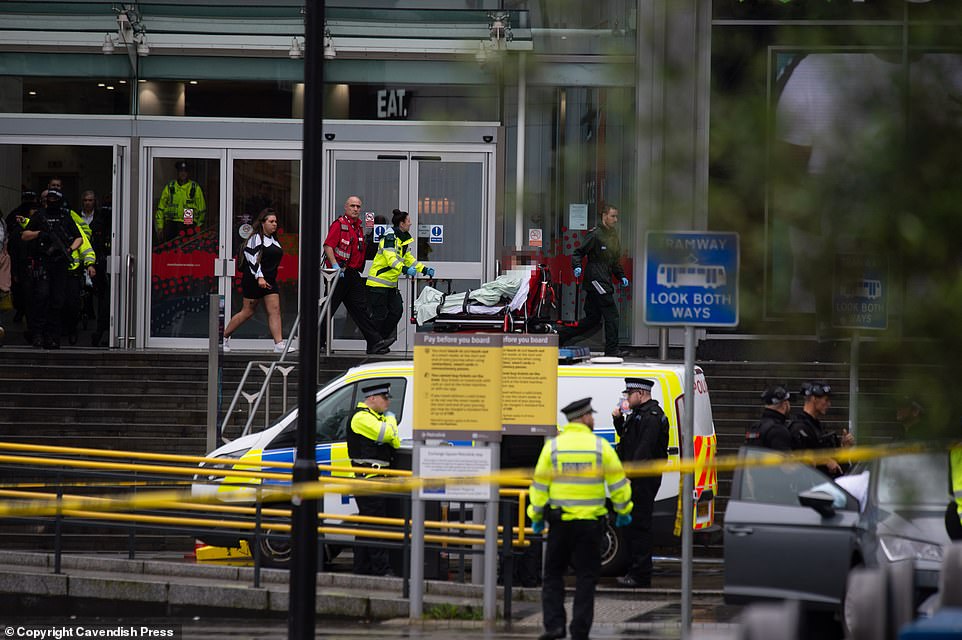 A young woman appeared to be among the victims after she was stretched away, conscious, by a team of paramedics 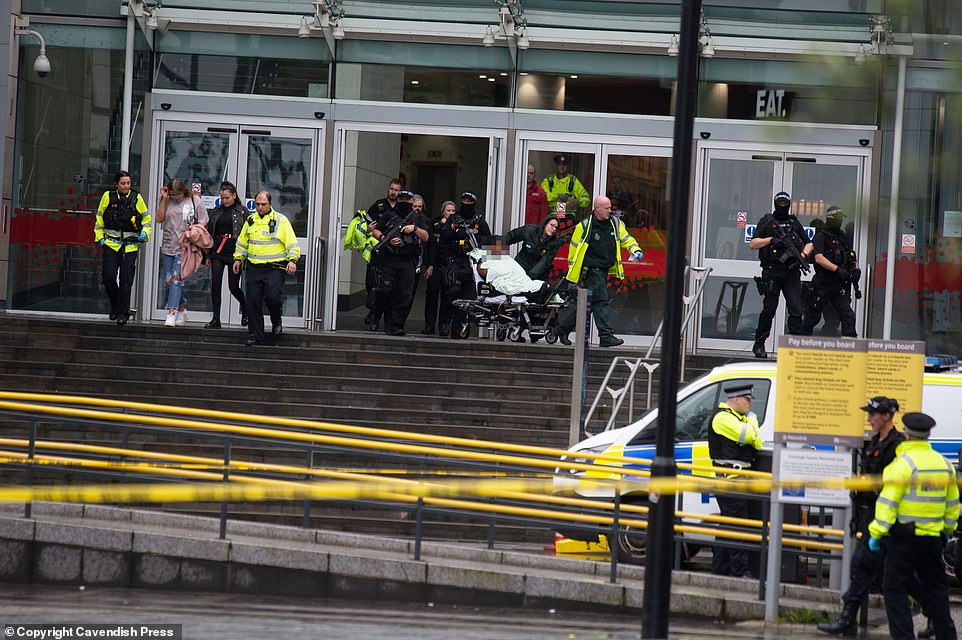 Another local tweeted: ‘Some fella has just walked in Starbucks in the Arndale and stabbed a load of people apparently. Scary stuff.’

The Arndale Centre is just a few hundred yards from the Manchester Arena and Victoria railway station – both of which have been the scene of recent terror attacks.

Twenty-two people were killed in May 2017 when Salman Abedi detonated a suicide bomb in the Manchester Arena following an Ariane Grande concert – the youngest victim was just eight years old.

Last New Year’s Eve, three people including a police officer were seriously injured after a 25-year-old man launched a knife attack on passers-by.

The suspect was heard to shout ‘Allah’ and ‘Long live the Caliphate’ during the incident – he was arrested on suspicion of attempted murder and his since been detained under the Mental Health Act.

In 1996, the Arndale Centre was damaged in a major bomb attack by the IRA in which a 1,500-kilograms device loaded on a lorry was detonated on Corporation Street.

More than 200 people were injured in the explosion, although there were no fatalities.

Greater Manchester Police have set a wide cordon around the centre as they investigate and armed officers have been drafted in to patrol. 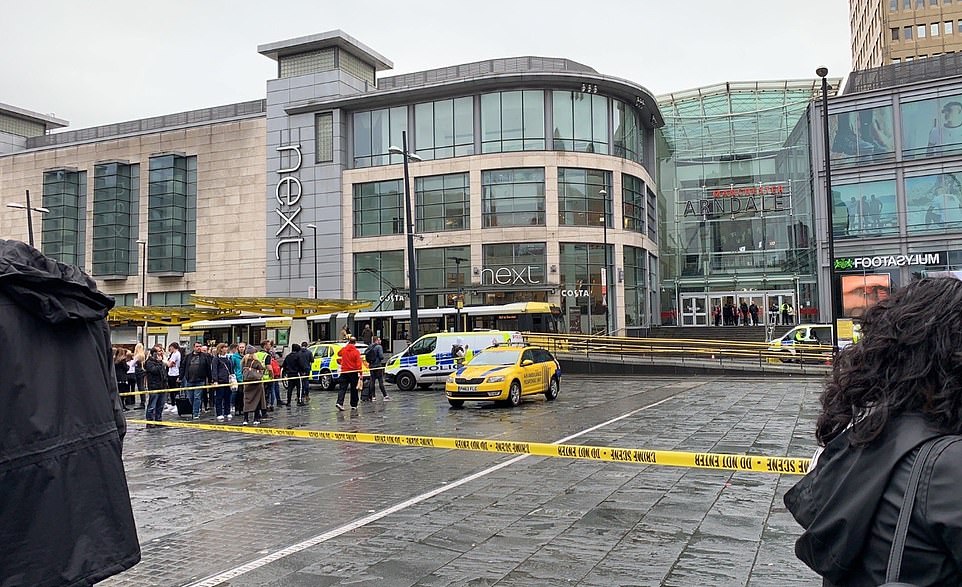 A wide cordon has been put around the centre as emergency services deal with those injured. Armed police are on patrol 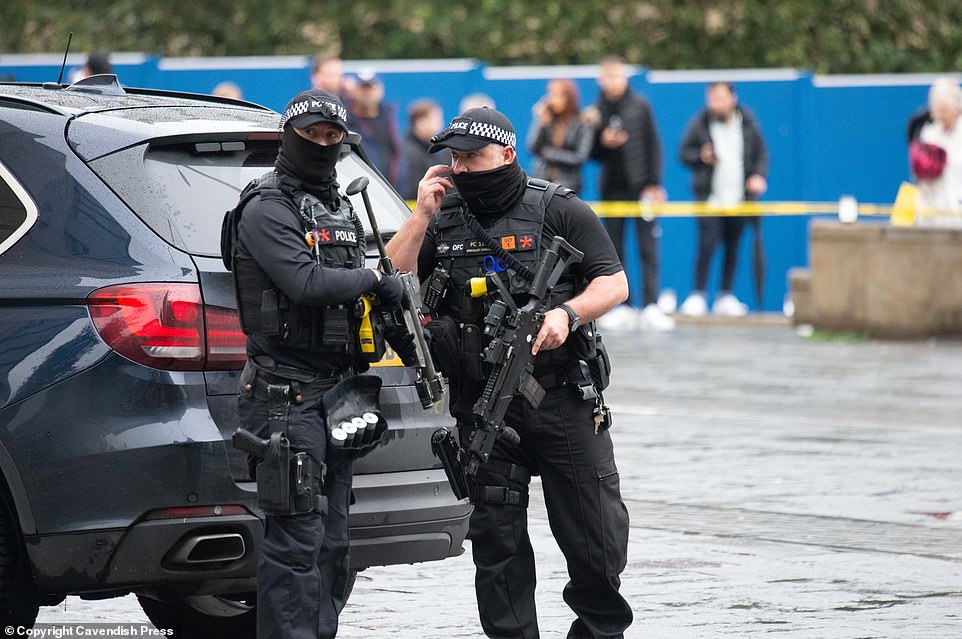 Scores of police as well as ambulance crews have been sent to the shopping centre. Armed police are patrolling outside 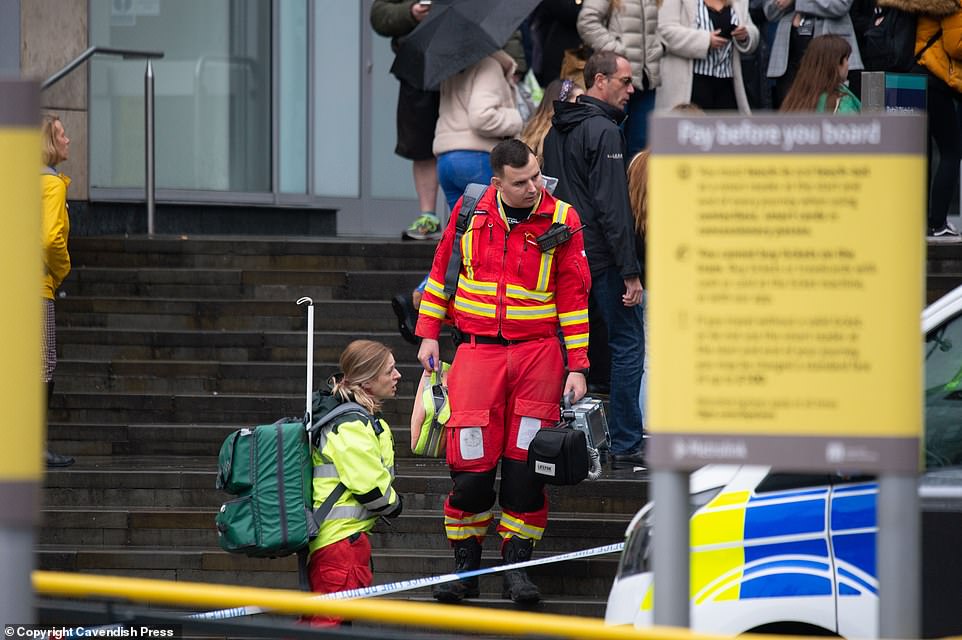 A large team of paramedics have arrived at the centre following reports of multiple stabbings. Four people are injured 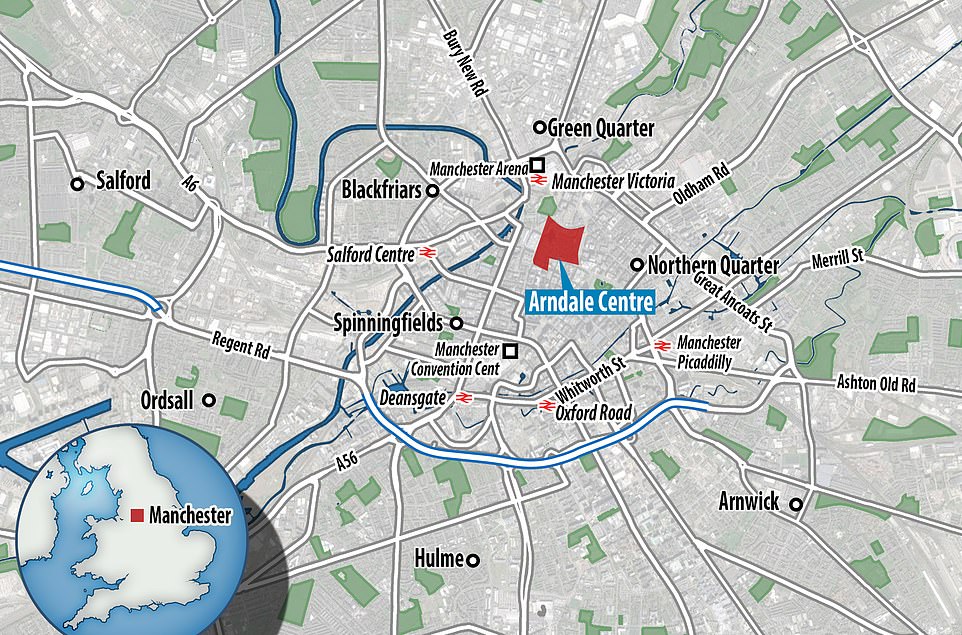 The Arndale Centre is a large shopping mall which contains more than 90 shops, restaurants and cafes in Manchester centre

A police spokesman said: ‘Specialist officers are continuing to respond to an incident at the Arndale shopping centre in Manchester city centre. We can confirm that five people have been stabbed and taken to hospital.

‘In these early stages we are keeping an open mind about the motivation of this terrible incident and the circumstances as we know them.

‘Given the location of the incident and its nature, officers from Counter Terrorism Police North West are leading the investigation as we determine the circumstances.

‘A man in his 40s – who was arrested at the scene on suspicion of serious assault – remains in custody for questioning.’

Prime Minister Boris Johnson tweeted: ‘Shocked by the incident in Manchester and my thoughts are with the injured and all those affected. Thank you to our excellent emergency services who responded and who are now investigating what happened.’

In a later update, police confirmed the victims included three woman, one 19, one in her 40s and another whose age was not given, and a man in his 50s.

The police spokesman added: ‘We were called to reports of a multiple stabbing at the Arndale shopping centre at 11.15am earlier today.

‘At this stage we believe that four people were injured during the incident – not five as previously reported. We will update as the situation becomes clear.

‘A man in his 50s has also been taken to hospital with stab wounds. A fourth victim – a woman in her 40s – who was not stabbed – has been assessed and did not need to go to hospital following assessment by paramedics.

‘A man in his 40s – who was arrested at the scene on suspicion of serious assault – remains in custody for questioning.’ 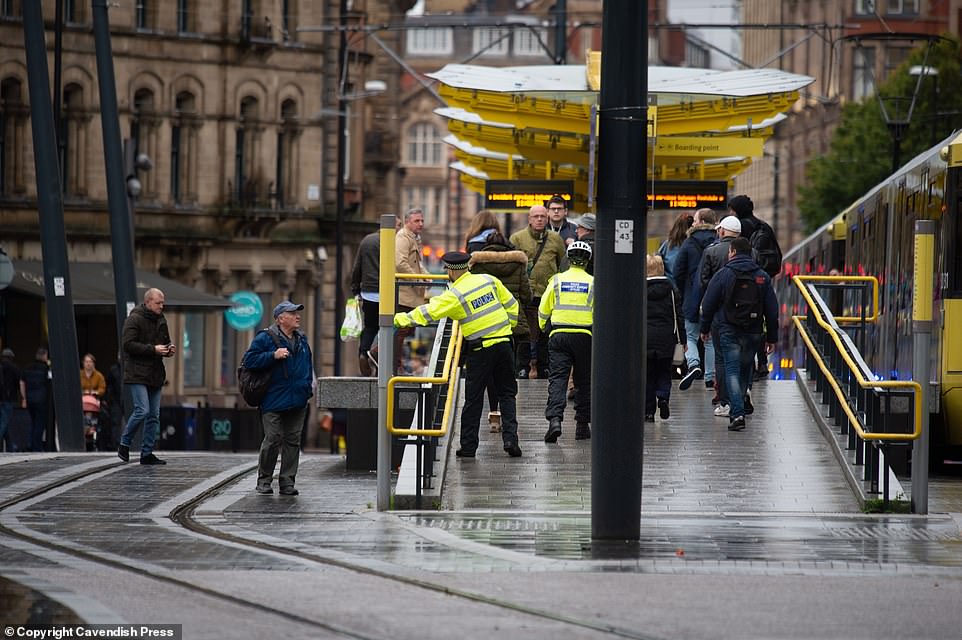 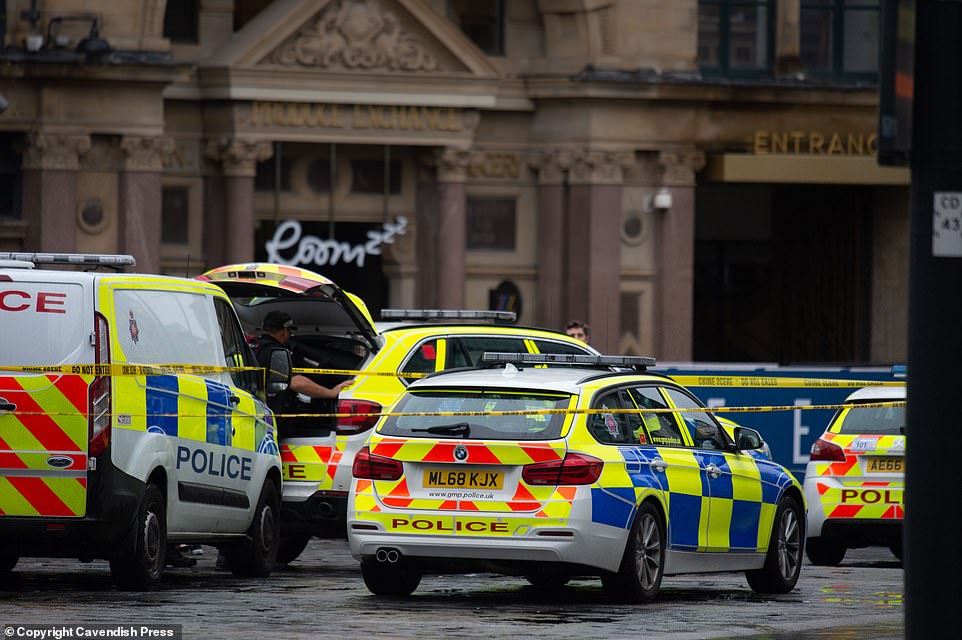 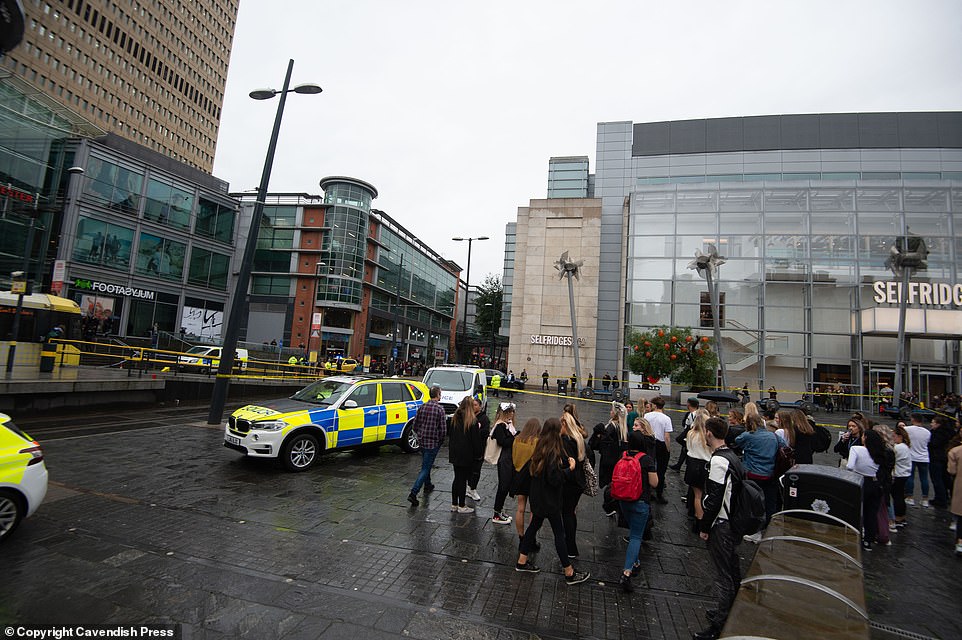 One witness was leaving the nearby Football Museum when people were evacuated.

He said: ‘There were loads of police and ambulance. Everyone was coming out quite calmly, it seemed quite organised. The trams have stopped outside and no one is being allowed in.’

The shopping centre has been evacuated as emergency services help the wounded and deal with the arrested man.

‘We are unable to comment any further as the incident is currently being handled by Greater Manchester Police, who we will continue to support with their investigation.

Bev Hughes, Greater Manchester’s deputy mayor for policing, crime and fire, said: ‘I want to praise Greater Manchester’s emergency services for their swift and professional action. Our thoughts are with the five people injured. The scene has been secured and all emergency services are engaged in ensuring public safety – the investigation is ongoing.’

Emergency services are holding a joint ‘Gold’ meeting this afternoon.

Study of puzzling fossils confirms they came from an...
NASA proposes 2025 mission to Neptune's moon Triton which may host an ocean beneath its icy crust
Asos owner planned to give Scottish estates to his children before Sri Lanka attack
PETER HITCHENS: Furlough billions? Just a giant payday loan in YOUR name
Coronavirus: WHO chief berates world for not heeding warnings
PETER HITCHENS: It's time to view the police just like other failed industries
Scandal-hit NHS trust at centre of baby deaths review receives another warning
SIR CLIVE WOODWARD: Farrell is the man Jones can trust to play as England's No 10