A slight, watchful figure, she perched on a sofa in the camp commandant’s office studying me. Having had no visitors for many months, she was very wary.

‘What are you?’ she asked finally.

I didn’t need to ask her the same question. By then her face was instantly recognisable; the so-called poster girl for Islamic State – British teenage bride Shamima Begum.

That day in the hut on a sun-baked hillside in northern Syria last September, she was under obvious psychological strain.

‘The only crime I committed was to come to Syria,’ she told me. ‘I would like to be at home. There is more safety in a British prison, more education and access to family. Here… is still a warzone. 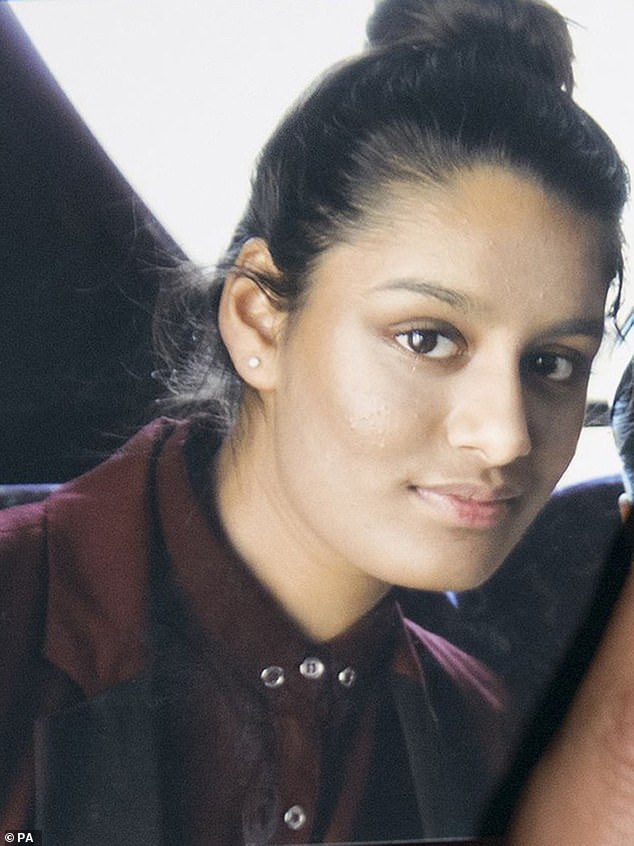 Richard Pendlebury’s view remains that Shamima Begum, pictured, should be allowed back to face justice here

‘I want to be taken back and put on trial in my own country.’

Since she had emerged from the collapsing Caliphate six months earlier, heavily pregnant, she had lost her newborn son Jerah – her third child to die in Syria.

She had also been moved from the volatile Al-Hawl camp, which held tens of thousands of diehard IS families, to a smaller internment centre for her own safety and rehabilitation. Her former Islamist comrades had not approved of her speaking to Western journalists.

But what she had said to the media in early 2019 had also caused great anger and dismay back in the UK.

She did not regret joining the Caliphate and had wanted its victory, she said defiantly. Most startling was her admission: ‘When I saw my first severed head it didn’t faze me at all.’

So when she observed that ‘I’m not the same silly little 15-year-old schoolgirl who ran away from Bethnal Green four years ago,’ many agreed. She was now a dangerous terrorist.

This view was encouraged by local anti-IS activists who claimed that she had been an armed member of the organisation’s brutal morality police.

It was also alleged she had been an active recruiter and sewn IS suicide bombers into their explosive vests. Her British citizenship was revoked by the then home secretary Sajid Javid. 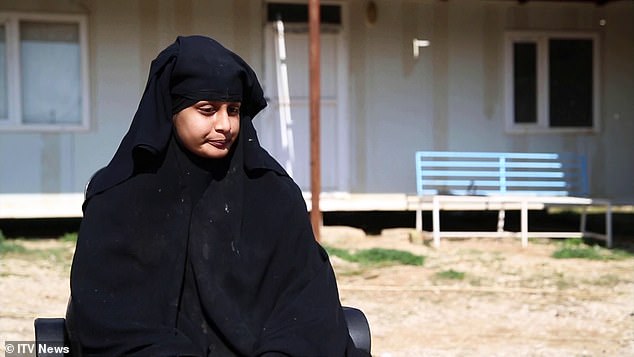 Begum, who yesterday won her High Court case to return to the UK, pictured during an interview with ITV News last year

Having remained out of sight since making these incendiary statements, the young woman I met last autumn – she turned 20 the month before – wanted to put the record straight.

‘I said those things then to protect myself and my unborn son. That is all. I did not receive threats [from IS women] at first because I made it seem as if I was with them, that I still supported IS and was against the West and still radical.’

‘I hate [IS] so much,’ she began. ‘I hate these [IS] women… and what they believe in and that they think they can terrorise anyone who does not share their views.’

She said the reports of her participation in IS activities was ‘such bull****. For the first eight months [in the Caliphate] I was waiting at home for my husband who was in prison suspected of spying. After that I was constantly producing babies. I did not even speak Arabic.

‘They are trying to make me out to be a villain when they know that I am clean.’

Many may think ‘she would say that’ – anything to escape from that dangerous limbo. Some observers have suggested that IS women have been coached in what to tell the authorities and media, so they can return to the West and resume their activities.

If that was the case with Shamima then she had been coached well. She was convincingly disenchanted by her experiences.

What she had seen and continued to endure had taken its toll, she said. ‘My physical health is OK… Mentally though, I am in a really bad way. I need therapy to deal with my grief. It is so hard.’

As she spoke she clasped and wrung her hands continuously.

Shamima Begum’s sorry tale began in February 2015 when, aged 15, she and Amira Abase and Kadiza Sultana, two friends from the Bethnal Green Academy school, flew to Turkey and crossed into Islamic State-held territory in Syria.

Having been groomed and recruited online, they were following in the footsteps of another schoolmate, Sharmeena Begum (no relation) who had gone the year before. 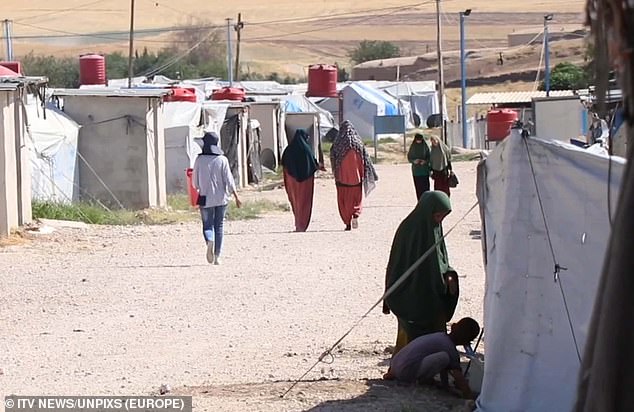 The Jihadi bride was pictured wearing jeans, a shirt and a blue hat as she walked through a Syrian refugee camp

Within ten days of her arrival, Shamima had been married off to a 22-year-old Dutch man and Muslim convert turned IS fighter called Yago Riedijk.

I found Shamima in Camp Roj – ‘Sunshine’ – home to 700 families, the majority of whom were innocent Syrian civilians displaced by the war. The IS contingent included six other British IS women and 14 children, all of Pakistani heritage.

The first thing I noticed was the physical change: no longer the stern teenager dressed in flowing Islamist black, Shamima wore a plum coloured hijab, had a diamante nose stud (she’d used a needle, she told me, and fresh garlic as an antiseptic) – and wore baby blue nylon trainers. There was even a hint of lip gloss.

She shared her tent with a Canadian IS bride who was 30 years her senior and treated her ‘like a child’. They lived mostly on rice, supplemented with vegetables.

She watched TV for much of the day and listened to Western pop music, though other IS women objected.

The sanitation was better than the previous camp and she received regular hygiene boxes from a German charity. She had access to a phone but had not spoken to her estranged family since going to Syria. Her husband was in custody elsewhere and her teenage travelling companions had been killed in the war.

She said she yearned to return to Western education and eagerly accepted the two books – a Russian novel and a classic travel story – I had in my rucksack.

She struck me as an intelligent young woman who had turned in on herself. Of course it was impossible to measure the authenticity of her contrition, but it is hard to ignore the fact that she was still a child when encouraged by others to leave her home, and once in Syria she suffered what under British law was sustained sexual abuse before being engulfed by a vicious war and seeing her children die.

My view remains that she should be allowed back to face justice here. Yesterday the Court of Appeal agreed but Shamima’s journey is far from over.

Britain's biggest speed camera snares 1,200 motorists in its first month
Thousands of protesters take to the streets of Glasgow to demand Scottish independence
The Greatest Dancer: Cheryl's 'shocked' face leaves viewers in hysterics
Boris Johnson prepares to launch bid within hours to force snap election
Georgia executes inmate for 1996 shotgun slaying
Drinking pals end up with very sore heads when they try climbing up onto a garage roof
Footballer Emiliano Sala's missing plane is FOUND
Theresa May is told she must go as ministers plot to install Michael Gove in No 10 to save Brexit