The parents of a child who died of sepsis have slammed the decision to let the doctor who was treating him back to work despite her manslaughter conviction.

Dr Hadiza Bawa-Garba will be allowed to return to work despite a catalogue of errors relating to her treatment of Jack Adcock, after he came into her care at an assessment unit at Leicester Royal Infirmary in 2011.

She was convicted of the six-year-old’s manslaughter in 2015, but yesterday the Medical Practitioners Tribunal Service ruled she would be able to practise again.

Today Jack’s mother, Nicky, hit out at doctors who had petitioned for her to be able to return to work.

‘She killed our son,’ she told Good Morning Britain, after saying: ‘I don’t think she should be given a second chance.’ 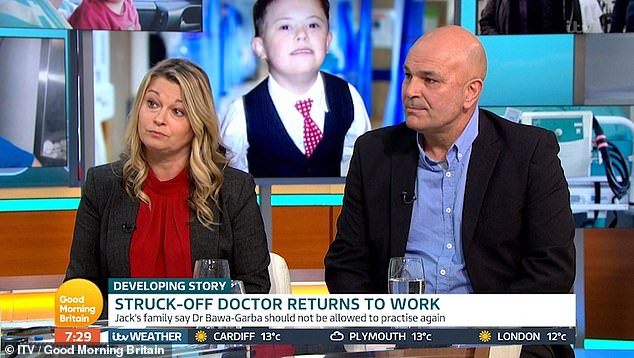 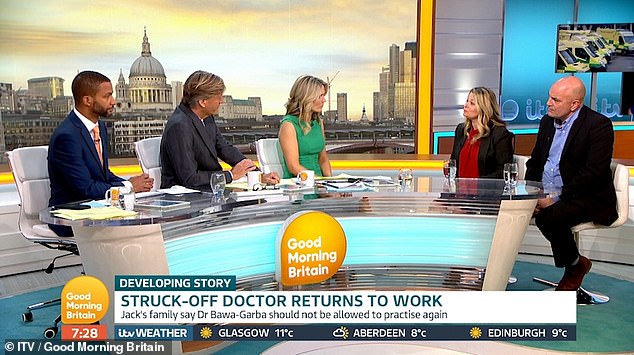 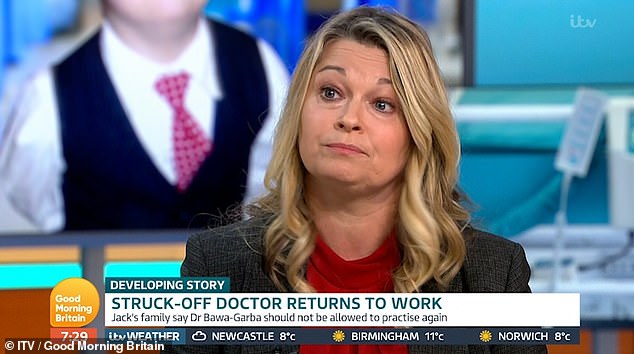 Mrs Adcock (pictured on today’s GMB) opened up about her pain at losing her ‘character’ of a son, who would be 15 this summer

The doctor’s failings included not looking at X-rays promptly and failing to see that he was suffering from Sepsis and to administer the appropriate antibiotics.

She was convicted of manslaughter by gross negligence for her actions at Nottingham Crown Court. She was given a two-year suspended sentence.

Mrs Adcock expressed fears for people who might find themselves under Dr Bawa-Garba’s care.

‘I hope wherever she goes if anyone does employ her that they realise, remember her face and refuse to be treated by her and don’t let any children near her,’ she said.

Jack’s father, Victor, appeared alongside his wife as she suggested that the people who had campaigned for Dr Bawa-Garba to be able to return to work were self-interested.

‘They weren’t interested until she was struck off,’ she said. ‘They were interested for themselves because they thought “oh my goodness this could be me”.’ 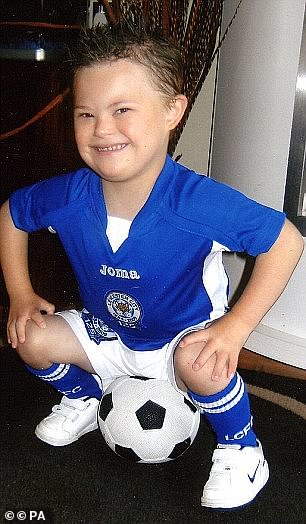 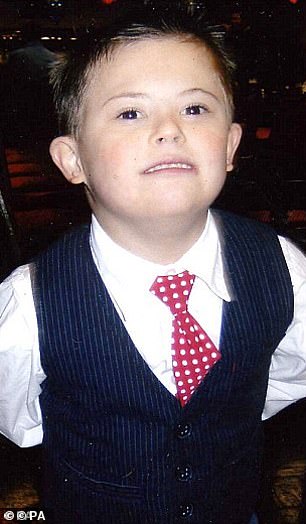 She said that anybody capable of making the same amount or type of errors shouldn’t be practising.

Talking about her son, who would be 15 this summer, Mrs Adcock described him as a ‘character’.

‘Everyone that met him adored him he love dancing he had a season ticket and went to football, he was such a little character,’ she said. ‘She’s been given a second chance we’ve not our son’s not here he’d be 15 in July.’ 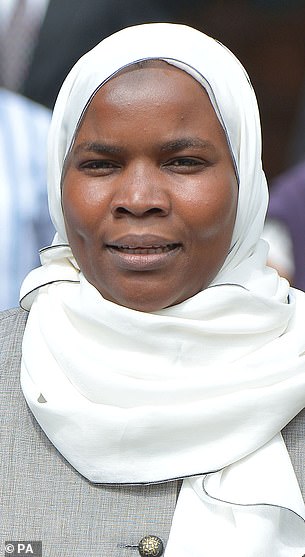 It comes after yesterday she said Dr Bawa-Garba ‘didn’t care’ about them and ‘should never be allowed in a hospital again’ following a tribunal that ruled she could return to work.

Following the hearing in Manchester, the teaching assistant said: ‘She made over 21 mistakes with my son that day. Her human errors, nothing to do with the system.

‘If I got in a car, and I know it’s different, and I hit a child and I killed that child then I would lose my licence and I would go to prison.

‘I would probably never want to get in that car again but all she has done is to try and fight us.’

Mrs Adcock said that all Dr Bawa-Garba had to do was to ask for help and phone intensive care who would have taken care of her son.

She said she was ‘gobsmacked’ when Dr Bawa-Garba was originally handed a 12-month suspension but then welcomed the GMC’s successful appeal to the High Court to strike her off.

In June 2017 Dr Bawa-Gaba was suspended from working by the Medical Practitioners Tribunal Service (MPTS) for 12 months.

The following year she was struck off the register, but this was overturned after medics rallied round her and raised £200,000 for her legal battle.

Many claimed Dr Bawa-Garba, who was 35-years-old at the time, was being used as a scapegoat when it was the system in place that was responsible for the incident.

Her current suspension is due to run until July this year but she plans to remain off work with her newly born child until February.

British-Australian tourist is missing after falling overboard on 'drunken' Thai speedboat trip
Turkey releases CCTV of Christchurch terror suspect at Istanbul airport
Speedboat killer Jack Shepherd 'wanted to marry victim Charlotte Brown and start a family with her'
The internet is obsessed with 'Yoda cat' - and some want to travel across the country to adopt her
Patrick Reed sticks boot into USA captain Jim Furyk
Pictured: ‘Paedophile with foster daughter he used as BAIT to rape children at German caravan park'
Teenager is accused of stabbing his British father to death in Brazil
Former deputy Prime Minister Lord Heseltine says the 'battle' is on for the Conservative party