Debris from a shipwreck has been found on a popular beach more than 120 years after it sank.

Parts of the ship including an anchor appeared out of the sand at Barafundle Bay in west Wales.

Experts believe the remains could be from the doomed Sea King, which sank on a perilous voyage from Cardiff to Brazil in 1896, claiming the lives of eight men.

The wreck appears around every ten years when sea and weather conditions cut away the sand at the beach to reveal ship’s timbers, a windlass and an anchor. 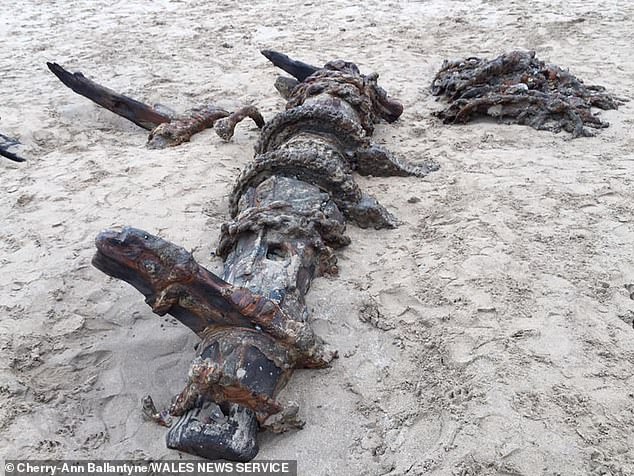 The shipwreck appearing out of the sand at Barafundle Bay, west Wales 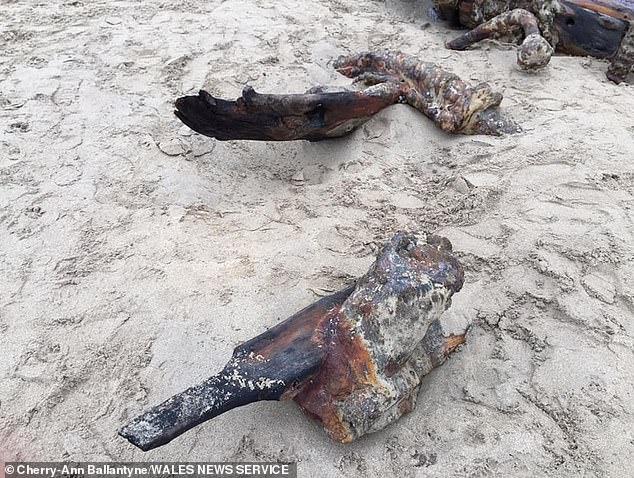 Beachcombers chanced upon the debris in west Wales, and believe it could be from the Sea King

Sea King was hit by gale force winds as she transported some 1,900 tonnes of coal to Brazil from Cardiff.

Maritime historian Ted Goddard suggested the remains could be from three ships, but believes the Sea King is the most likely.

Mr Goddard said wreckage from the Sea King appears with regularity every decade.

He said: ‘The Barafundle wreck appears every ten years or so when the sea and weather conditions cut away the sand at the beach to reveal ship’s timbers, a windlass and an anchor.

‘It’s believed to be a ship which ran on to rocks at Stackpole Head and drifted ashore on to Barafundle beach, between the 1880s and early 1900s.’ 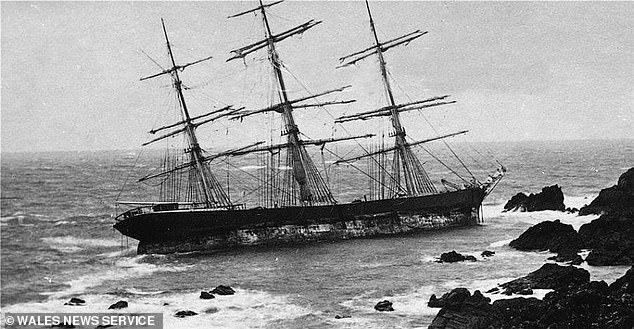 Mr Goddard added the remains could potentially be from the Dublin-registered wooden schooner Enterprise which was lost on a voyage from Swansea to New Ross on December 21, 1907.

He also said it could be the small wooden Wexford schooner Wasp, lost on a voyage from Newport to Wexford on December 12, 1887.

Speaking after the Sea King disaster, surviving Norwegian captain Gattorn Olsen said: ‘All went well until it commenced to blow a gale.

‘About three o’clock in the morning two seas came over us, and washed three hands overboard, and dismasted us.

‘All the sails were carried away, and the ship began to let in water.

‘The pump being smashed and the steering gear lost, we had to run before the wind, and when we sounded the well and discovered that we had 8ft or 9ft of water in the vessel, we could see that all we could do was to run her ashore, and so save our lives.’