Police have released shocking footage of a man punching a female officer several times in the face after he pushed her colleague into a hedge.

The two officers were assaulted by a man after they responded to a concern for safety in North Hykeham near Lincoln, in Lincolnshire on December 10.

The violence was captured on a body warn camera.

After one officer is pushed into a bush and a colleague then tries to restrain the man.

The man then punches a female officer in the face before they both fall to the floor where a scuffle ensues and the man appears to yank the officer’s hair.

Chief Constable Bill Skelly of Lincolnshire Police said assaults on officers will not be tolerated.

He said: ‘We have a duty to look after and protect the public but we are all too often prevented from doing so due to violent individuals who choose to attack those who are there to help them.’

He added that assaults are not part of an officer’s job and stressed emergency service workers are human beings doing a difficult job. 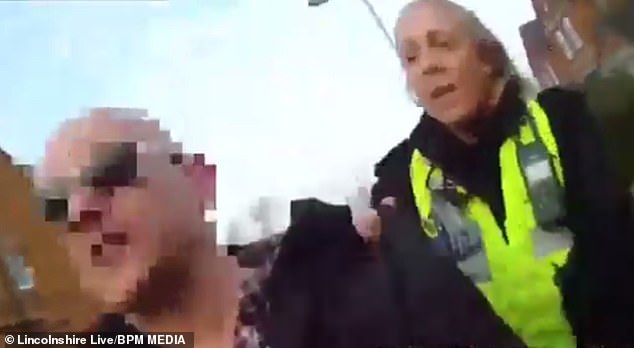 He said: ‘Most importantly it should be remembered that they are fathers, mothers, sons and daughters. When they are attacked they become victims just like any other, but victims who have been attacked while trying to help others.’

The Assaults on Emergency Workers Act was introduced in 2018 in response to the increased number of assaults on emergency workers. 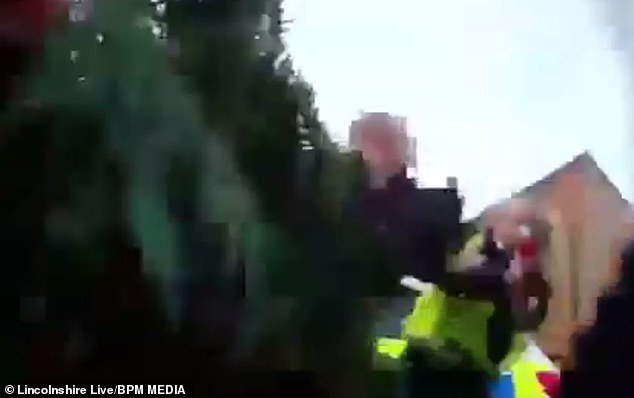 Under the new legislation, emergency workers include police and police staff, ambulance workers and NHS staff as well as Fire and Rescue staff, Prison Officers and those working in other custodial duties and whether these workers are paid or unpaid.

Where assaults cause more serious injury the legislation considers the offence ‘aggravated’ if it is committed against an emergency worker and gives the Courts the option to impose even harsher sentences.

The news comes after a spate of attacks on officers up and down the country.

In mobile phone footage posted on Twitter two men can be seen punching and kicking the male and female officer as scores of people pass without intervening.

A Met Police spokesman told MailOnline a 20-year-old man was arrested and charged with causing ABH and assaulting an emergency services worker.

He was also charged with driving without a licence or insurance after being stopped by police. He will appear at Wimbledon Magistrates Court today.

Two other men involved, one of which is seen in the video footage, are still at large.

Our Holiday Hero reveals the hacks to maximise airline loyalty schemes
Mike Pompeo arrives in Qatar to witness signing of historic deal with Taliban
China says violent protests in Hong Kong are 'the work of the US'
Freddie Starr's body has been repatriated to Britain
Final location of Darwin´s ship HMS Beagle given protected status
Ryan shines with arm and legs, Falcons beat Panthers 31-24
Sheffield brothers 'murdered by their mother and uncle' died within 12 minutes of each other
Billionaire diamond trader, 65, dies during penis enlargement surgery