A shocking video has emerged of cars driving on pavements and ramming each other in a 50mph chase.

One of the driver’s smacks into the back of the car he is chasing while another can be heard saying ‘start running you p**y, look at the p***y, look at him’.

He accuses the other driver of ‘putting a price on his head’ and asks ‘are you f****** mad?’  in the clip which was shared to a closed Facebook group today.

The car starts chasing the VW down the residential street, which is thought to be in London, and the driver shouts ‘jump out gang, jump out gang’.

The chase intensifies as both vehicles career down the street at around 50mph.

The driver then shouts: ‘Let’s ram him now, boom!’

A thud is heard as the car makes its speedy approach to the car’s tail end. 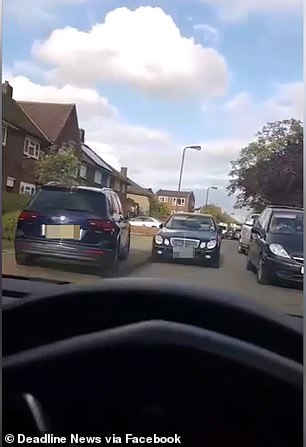 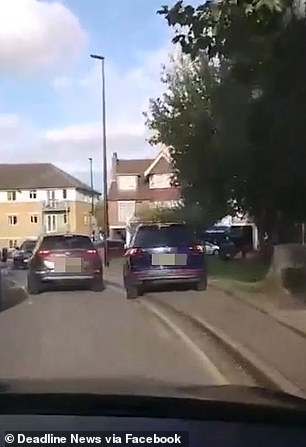 A VW (pictured left and right, on the pavement) was forced to drive along the curb after being chased by another car at 50mph.  In the horrifying clip, the driver of the chasing car, says: ‘Boom, ram the p***y that’s what we’re on. Put money on my head, are f****** mad! You put money on my head big man, are you f***** mad!’

The group then accelerates their car once more and rams the back of the VW aggressively.

Moments later, the VW takes drastic measures as the road has become blocked by parked cars and others have right of way.

It drives on to the pavement to snake around the roadblock as the chasing car accelerates. 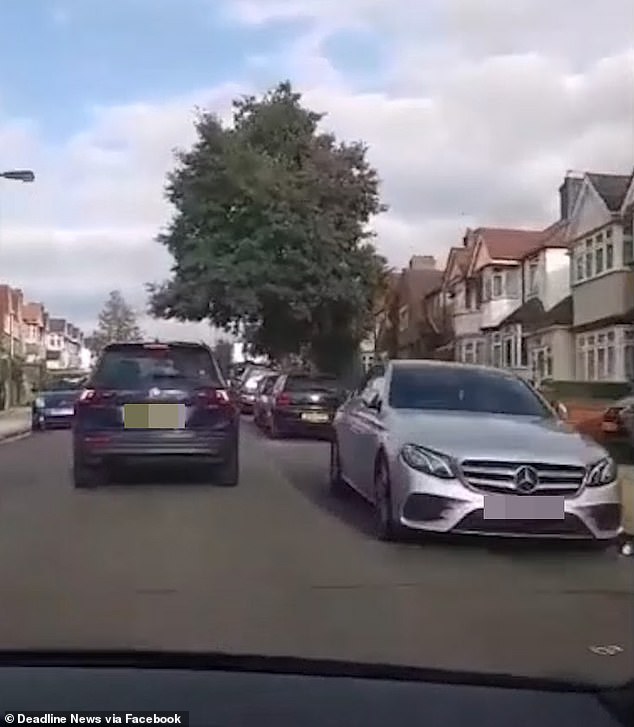 The driver of the viscous car accuses the other car of ‘putting a price on his head’ and asks ‘are you f****** mad?’ in the clip which was shared to a closed Facebook group today

The driver continues his rant: ‘You want to put P’s on my head. Ok tough boy.’

The VW reaches the end of the road and once pulls up on to the pavement and drives around the queued cars to get away quickly.

Do you know anyone involved?

If so, please email phoebe.eckersley@mailonline.co.uk

The video has left many in the comments speculating the reasons behind this erratic behaviour. One commenter said: ‘On f****** drugs mate.

‘Guessing the other car had someone who put a hit on this camera guys head?’

A second commenter wrote: ‘Something about the VW driver putting peas on the cameraman’s head.”

A third wrote: ‘I heard ‘put money on my head’ Stupid idiot gangsters, stabbed up or shot is normally how it ends.’

School shooting lockdown: One person is killed
British teenager, 17, 'is raped after being pushed into her cruise ship cabin', it is alleged
British spies close in on British 'White Widow' terrorist Samantha Lewthwaite who may be in Yemen
EU set to ban veggie ‘burgers’ and force shops to call them ‘veggie discs’
Pregnant bride dies from stroke minutes before reaching the altar in Brazil
Excited Melbourne Cup punters sprint through Flemington Racecourse entrance
Saudi prince to give first speech since Khashoggi's...
Meghan Markle's BFF Jessica Mulroney spotted in NYC