A dog owner was captured on camera walking his pet while driving his car.

Dash-cam footage shows the animal, thought to be a whippet, being dragged along by its lead through the window of a silver Nissan X-Trail.

The incident took place on John Milne Avenue on the Kingsway Business Park in Rochdale, Manchester.

A passing motorist says he recorded the incident on his dash-cam as he drove to work at about 9.30am on Thursday morning.

The driver, who asked not to be named, said: ‘I’m a professional driver so I’ve seen some things, but was just absolutely disgraceful.

‘The most terrifying thing is this is an industrial estate; it’s not some quiet country lane.

‘There’s a huge warehouse just up the road and loads of HGVs going up and down. 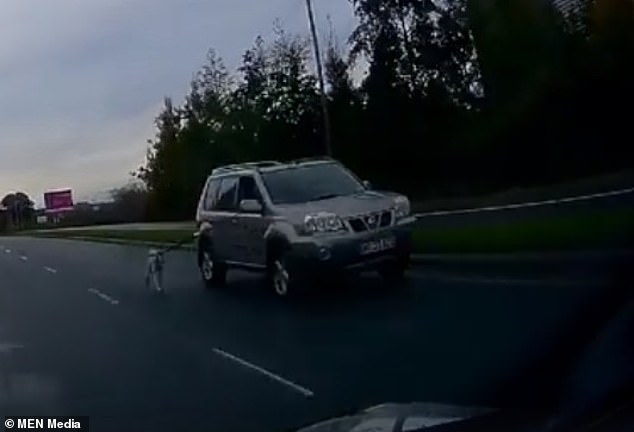 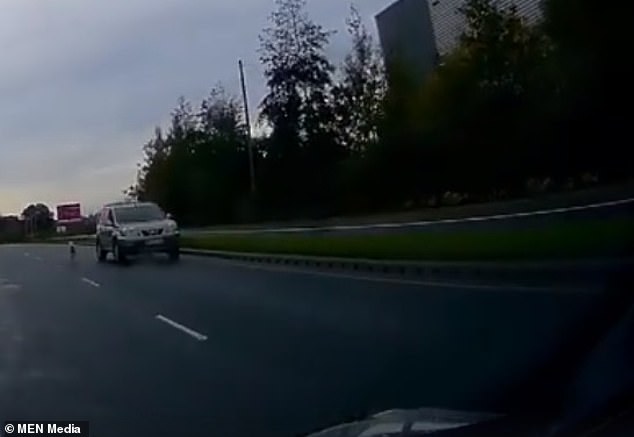 The clip has been viewed more than 1,000 times since being uploaded to Facebook

‘Whippets are renowned for needing lots of exercise, but this is just ridiculous.’

The footage has been viewed more than 1,000 times since being shared on Facebook on Friday morning.

In 2010 a County Durham man lost his licence after getting caught walking his dog while driving.

The 23-year-old wound down the window of his Nissan Navara to exercise his lurcher when police caught him.

Officers spotted him driving at 5mph along a country lane.

He later pleaded guilty to not being in proper control of a vehicle, was fined £66 with £58 costs and had three penalty points added to his licence.

Because he already had nine points, this meant he was banned from driving for six months.