A Gulf War veteran was killed in a one-punch attack by a security guard in Thailand, an inquest heard.

Former Army major Mike Jones-Mathias, 55, was on a work trip and had finished dinner with colleagues when he dropped into a bar in Pattaya on his way back to his hotel on May 17, 2018.

But he dialled emergency number 911 in the early hours of the morning – just five minutes before CCTV captured him being punched to the floor.

A shocking video played at the inquest shows the former officer flailing towards two Thai men before one leaps towards him landing the fatal blow on the side of his neck, knocking him to the ground. He died later in hospital in Wales.

Security guard Phumphat Tanosingh was charged with grievous bodily harm for the punch and faced a trial in Thailand.

But he was found not guilty after claiming self-defence – claiming Mike had attempted to leave the Mandarin Agogo bar without paying his bill.

Wife Veronica, 50, said: ‘For the record, I know my husband would never have left a bar without paying a bill.

‘What could have happened in that establishment that could make that punch lawful?’ 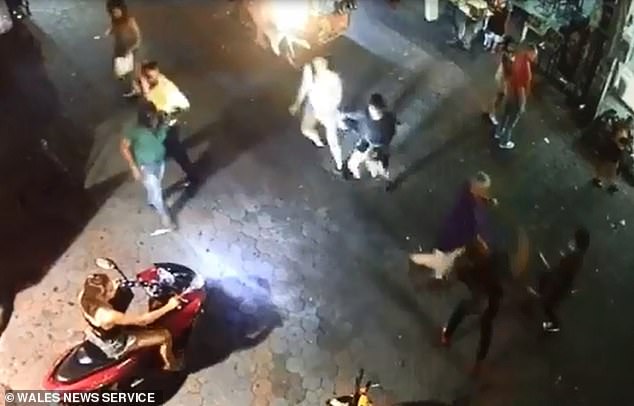 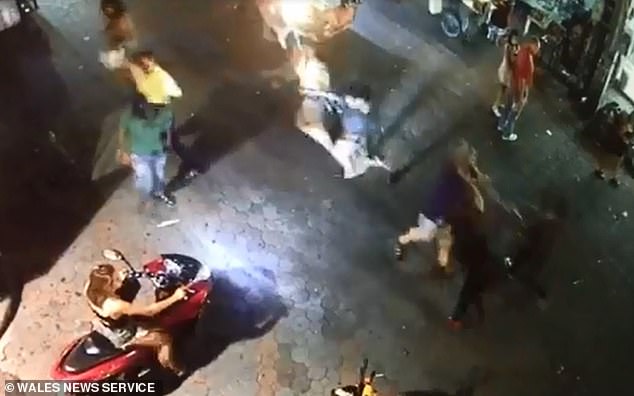 One man leaps towards Mr Jones-Mathias, hitting him around the head or neck with a punch 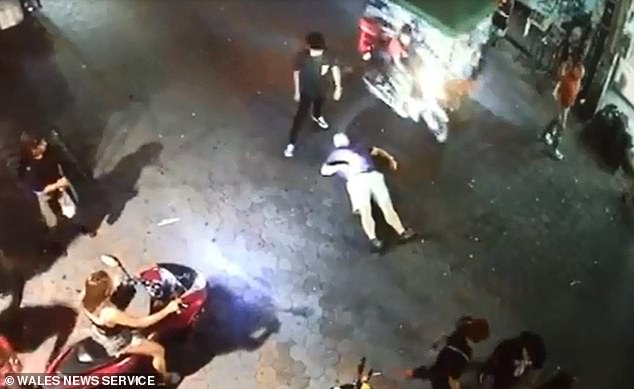 The man, understood to be bouncer Phumphat Tanosingh was charged with grievous bodily harm but acquitted pleading self defence, stands over the fallen retired Major then walks away

She questioned why her husband would have called for emergency assistance while in the bar.

CCTV footage played in the inquest showed Mike walking backward in the main street outside.

He throws a punch to the air as he is approached by two Thai men – and is then hit to the floor with one horror punch. 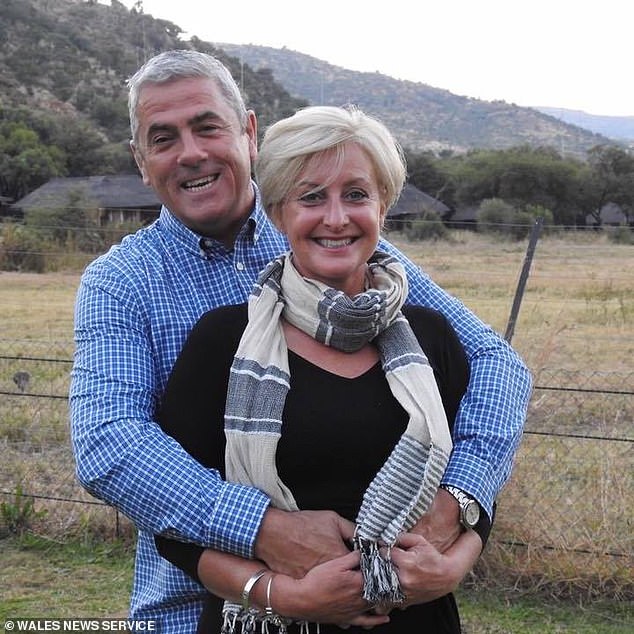 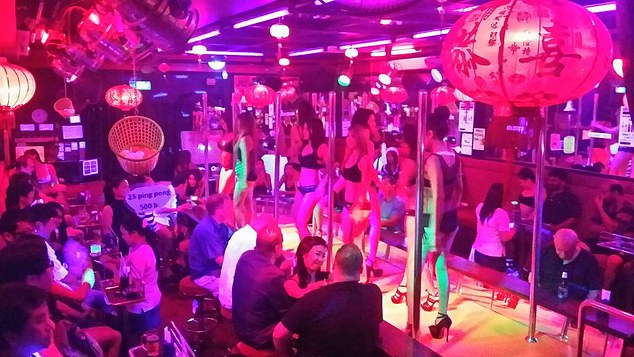 The Mandarin Agogo in Pattaya, Thailand. Mr Jones-Mathias had dropped in on his own after dinner with colleagues 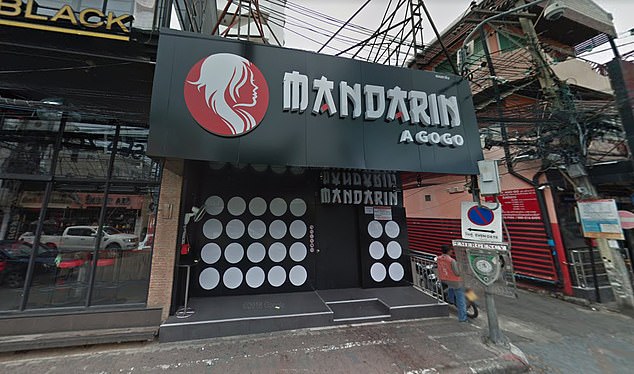 The punch was delivered on the street outside the bar, pictured, five minutes after he had dialled 911

The inquest in Pontypridd, South Wales, heard Mike was at the start of a three-month work trip as a senior operations project manager.

He had gone for an evening meal with his senior management team but later decided to stop at a bar alone on May 17 last year.

Veronica said: ‘At no point in the court transcript does it mention the video shown. Why was the video not shown in evidence?

‘The judgment was handed down without them knowing that Mike was dead. Had they known I wonder whether or not the conclusion would have been different.’

She added her husband put up a ‘monumental fight’ while recovering from his brain injury.

The inquest heard Mike underwent surgery in Thailand for damage to his right frontal lobe and was finally flown to Cardiff six weeks later. But he died on March 24 this year after his health deteriorated. 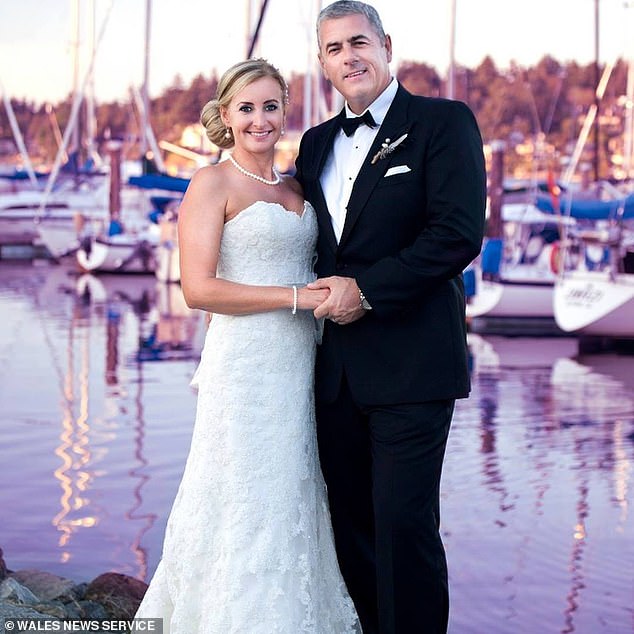 His wife Veronica, 50, pictured above with Mike, said: ‘What could have happened in that establishment that could make that punch lawful?’

Professor Phillip Smith, of University Hospital of Wales, gave a cause of death as pneumocystis jirovecii pneumonia and traumatic brain injury.

Mike, of Cowbridge, Vale of Glamorgan, graduated as an officer in the Army in 1984 and served in the first Gulf War.

He later worked as an operations manager for heavy lift and installation engineering projects in the Middle East.

The inquest heard Mike and wife Veronica had opened a cafe in Cardiff when they returned to the UK in 2015.

He said: ‘Yes, it was on the evidence deliberate but was it unlawful?

‘I haven’t heard any evidence from the assailant. If he was here in the UK then he would be called as a witness and he could be questioned.

‘He has not had the opportunity to come before me and make representations to me.

‘I have to bear in mind that there was a trial of some sorts in Thailand and as a consequence, he was acquitted.

‘I am not satisfied beyond reasonable doubt that it would be safe for me to reach unlawful killing.’

Recording a narrative conclusion, he said: ‘The deceased died as a consequence of complications arising from head injuries sustained following a punch to the head.’