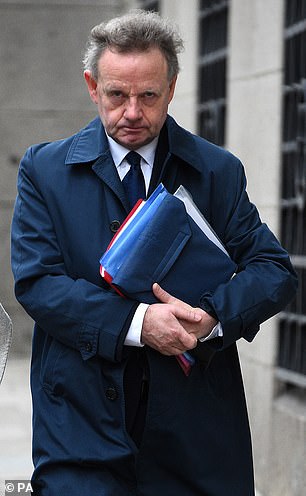 A pilot whose plane crashed during the Shoreham Airshow has spoken for the first time about the disaster which claimed the lives of 11 people.

Andrew Hill told jurors he has no memory of the ‘dreadful tragedy’ as he gave evidence at his trial at the Old Bailey on Thursday.

The 1950s Hawker Hunter fighter jet plunged to the ground and exploded in a fireball on the A27 in West Sussex after Hill attempted a loop on August 22.

The 54-year-old, of Sandon, Buntingford, Hertfordshire, denies 11 counts of manslaughter by gross negligence.

He told the court he remembers discussing plans for his display with organisers a week before, but has no memory of events between August 19 and the moment he woke from an induced coma in hospital the following month.

He said: ‘I can only recall what preparation I did up until the 19th.’

Asked by Karim Khalil QC, defending, if he had any memory of taking off on the day of the crash, or any part of the display, he replied: ‘None at all.’

Hill said: ‘Probably most of the last three years have been spent trying on earth to resolve what happened.’

Asked if this had been easy, he replied: ‘No, because it caused a dreadful tragedy to a lot of people. I was the pilot, I was in charge of the aircraft.’

Hill claims he had ‘cognitive impairment’ at the time of the crash and told medics who came to his rescue that he ‘blacked out’ in the air, the court previously heard. 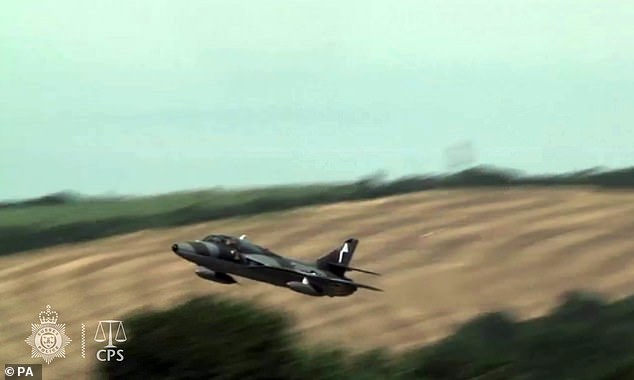 Hill, who had flown the same aircraft at the 2014 show, was saved from the fireball that engulfed the dual carriageway after the cockpit was torn from the aircraft. He claims cognitive impairment left him unable to properly and fully control the aircraft 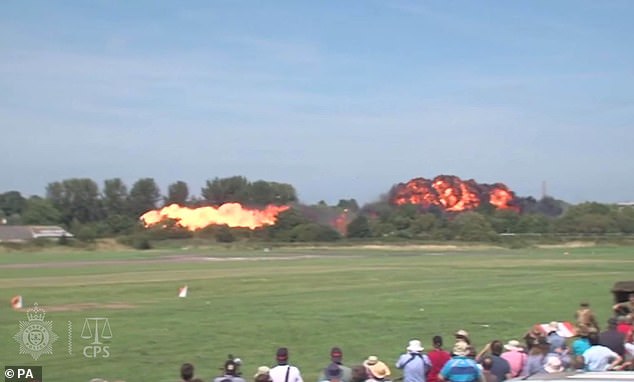 He was thrown clear from the burning plane and survived despite several serious injuries.

Standing in the witness box, he told the court he now only had ‘one negligible injury’ and had received ‘a lot of family care’.

Jurors have been told Hill passed medical checks before the crash.

Tests and scans afterwards did not show any sign of a medical condition – including cognitive impairment – which may have affected his health leading up to the crash, the court heard.

Mr Khalil told the court Hill had been advised not to watch the last moments of footage of the flight – which show the crash – because of ‘concerns of what it may trigger’ for him.

Hill said: ‘I don’t know what I did. I know what the aircraft did.’

He temporarily left the witness box to walk into the centre of the court, demonstrating his plan for the display using a model of the aircraft and moving around the room in front of the jury. 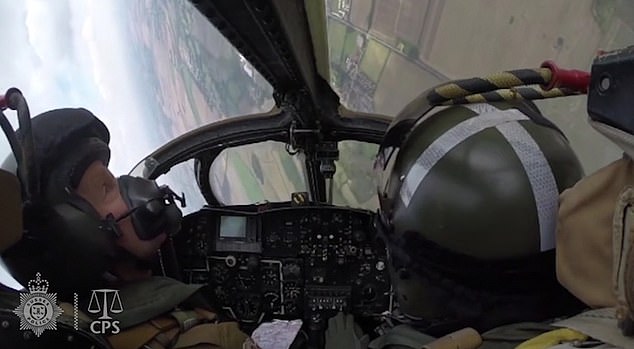 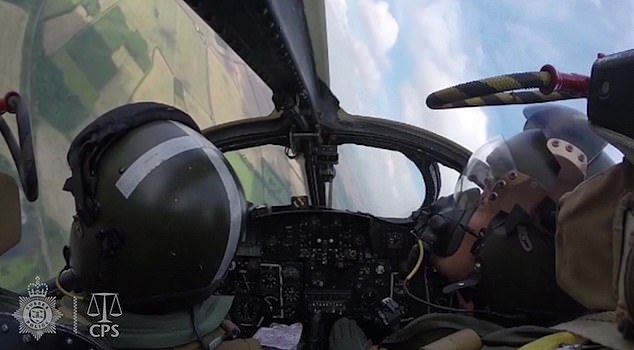 Asked if it would have been possible for ‘someone of clear mind’ to adjust the flight path during the display, he agreed, adding: ‘More than one opportunity.’

He said that from what he had seen, the flight path of the aircraft made ‘no sense’ and he ‘could not understand it’.

Footage of the Shoreham air show disaster from inside Andy Hill’s Hunter Hawker Jet cockpit was later played to the hushed courtroom.

As the film played to the moments leading up to the crash Hill looked down at the floor and closed his eyes. The video was stopped at a point where the front window of the jet is pointed towards the ground.

Hill said: ‘I have never seen that image.’

Karim Khalil QC, defending, asked him: ‘Do you know what you were doing?

He replied: ‘Everyone from very early days said that we don’t know what you were doing.

‘I have only started watching this video from April. It is exactly the opposite of what I would do, for the reasons the why the tragedy evolved.’

Footage of the Shoreham air show disaster from inside Andy Hill’s Hunter Hawker Jet cockpit was later played to the hushed courtroom.

Mr Hill said:  ‘I have only started watching this video from April. It is exactly the opposite of what I would do, for the reasons the why the tragedy evolved.’

The footage was rewinded to a moment before the Hawker Hunter rolled out.

Hill’s head moves around in the cockpit.

He said: ‘This head movement I don’t understand. It is very rapid, it is looking down towards something at a time when the aircraft is at a low level.

‘I had been watching out the window at the display side. I had no reason to look down.’

During the flight Hill reduces the jet’s revolutions per minute (RPM) making it fly slower and stopping it from reaching its necessary apex height at the top of its arc.

Jurors have heard it was a key contributing factor to the crash as it prevented the jet from reaching the necessary height to do a manoeuvre.

The jet then hurtled to the ground.

Hill said: ‘It was completely the wrong thing to do.’

Mr Khalil asked: ‘Can you think of any sensible explanation why you would reduce RPM?’

He did not eject but his ejector seat became separated from the cockpit, and he from it, in the crash.

Mr Khalil then asked Hill what he said to others in the immediate aftermath.

The QC said: ‘You were asked do you remember what happened, and you said no.

But Hill said he had would not have flown if he felt ill before the crash.

Jurors heard Hill told one emergency worker in the immediate aftermath of the crash that he had blacked out during the flight.

But he said he now has no memory of these conversations.

Federal Court rejects $35m Westpac fine
Officers wounded in Pittsburgh synagogue shooting receive standing ovation at Penguins game
Harry Maguire and fiancée Fern Hawkins announce arrival of daughter
Racing heir Sam Sangster's new yoga instructor wife, 30, shows her toned physique at wedding
Tory donor who owns '10 floors of whores' 'dated woman 38 years younger than him who lived there'
PIERS MORGAN: My chilling encounter with one of America's most notorious murderers
Hunt for missing people caught up in Hurricane Michael is now a 'search for the dead'
Prince Harry tells of 'great sadness that it has come to this' as he breaks his silence over Megxit