A Second World War booklet providing instructions for German troops on how to occupy Norway and subjugate its people has been rediscovered in an archive.

Archivists at the National Library of Israel in Jerusalem found the guide, entitled Simple Steps for Occupying a Peaceful Democratic Country, which was captured during a British raid in 1941.

Composed of a series of documents written by Nazi officials, it sets out how the press should be repressed, while another document says that all political parties must be dissolved and banned, The Times reported. 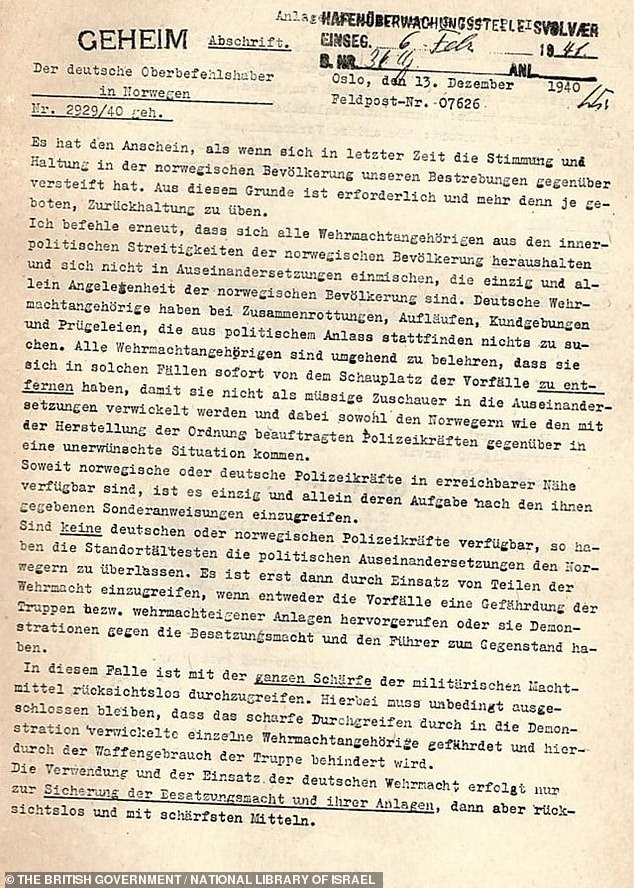 A Second World War booklet providing instructions for German troops on how to occupy Norway and subjugate its people, which was captured during a British raid on Nazi-occupied Norway, has been rediscovered in an archive. Above: one of the documents from the guide

Shai Ben-Ari of the National Library wrote in Israeli newspaper Haaretz that the guide constitutes a ‘brief, practical manual on how to take over a democratic country and suppress its population’.

In March 1941, nearly a year after Allied soldiers’ evacuation from Dunkirk, British commandos launched a raid in Norway to destroy factories producing fish oil and to destroy or capture German ships.

Germany had been occupying Norway following their invasion of the country in April 1940.

Papers making up the guide on the occupation were captured during part of the raid, named Operation Claymore, which also obtained parts for a German Enigma machine from a German trawler which helped the Allies crack German naval codes.

The papers were brought back to Britain and translated before being collated into a booklet and a copy has now been unearthed in Israel, Haaretz said.

Surprisingly, the guide urges invaders to exercise ‘restraint and caution’ in dealing with Norwegian dissidents or locals who insult their occupiers. 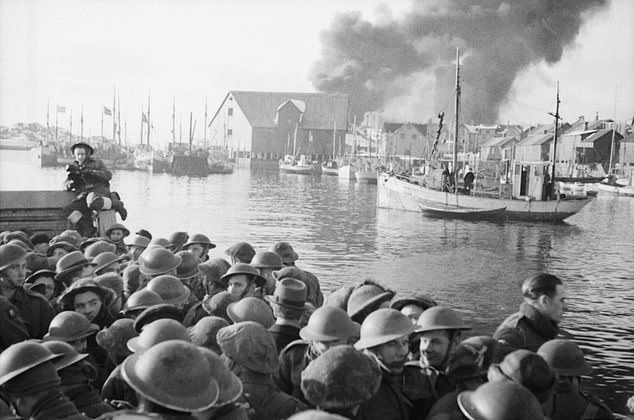 Papers making up the guide on Germany’s occupation were captured during a March 1941 raid by British commandos on Norway’s Lofoten islands (pictured). They were brought back to Britain and translated before being collated into a booklet

It said the ‘severest measures’ should be reserved for those who threatened soldiers.

Some of the notes were written by the commander of German forces in Norway, General Nikolaus von Falkenhorst, Mr Ben-Ari said.

‘It has become necessary, and it is more than ever urged, that restraint and caution be exercised,’ the General wrote.

However, those who insult or strike a German national should be reported or arrested, although religious clerics preaching subversive sermons should only be reported rather than arrested.

A different document in the cache says that all political parties must be dissolved and banned, except for the far-right party, Nasjonal Samling, founded by Vidkun Quisling.

His name is now synonymous with someone who collaborates with an enemy or occupying force. 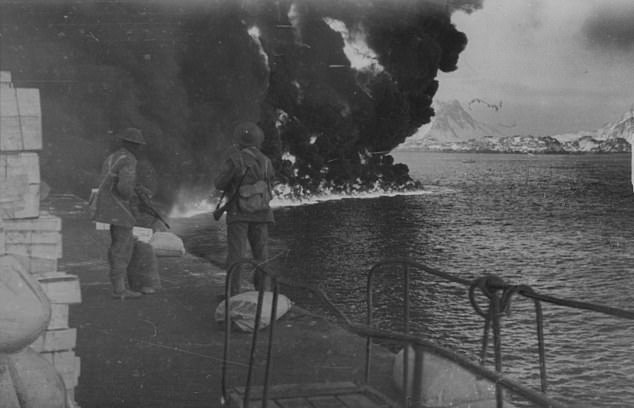 The papers set out how the press should be repressed, while another document says that all political parties must be dissolved and banned. Above: Burning oil during the British raid on the Lofoten Islands

Another stricture lays out how the press should be repressed, with German comminiques needing to be run on the front page of newspapers and printed with larger headlines.

Economic news must be entirely positive, as should newspaper reporters to their Nazi occupiers.

‘There can be no mistake, the instructions were written in the spirit of National Socialism,’ Ben-Ari added.