Labour activists opposed to the hard-Left’s takeover of the party under Jeremy Corbyn are plotting to mimic his rise to power by flooding the membership with their supporters ahead of the contest to succeed him.

They are copying ‘Corbynista’ tactics by trying to get tens of thousands of people to return to the party fold and vote for a moderate candidate to bring Labour back to its senses.

The move came as leading moderate contender Sir Keir Starmer confirmed he is standing in the contest, after taking a lead in polls ahead of socalled ‘Corbyn continuity’ candidate Rebecca Long Bailey. 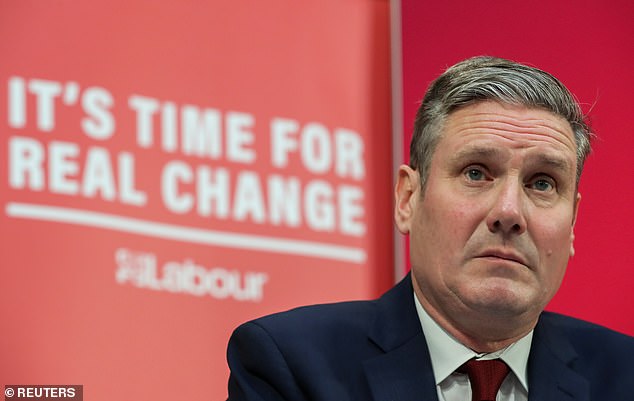 ‘Corbynista tactics’: Labour activists are looking to flood the party with moderates just as Sir Keir Starmer threw his hat into the ring 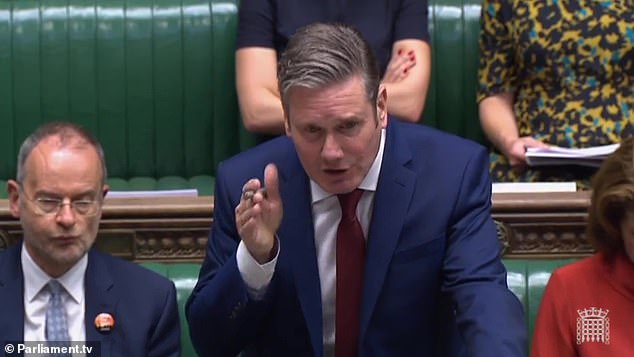 In the lead: Starmer is ahead of Rebecca Long Bailey in the leadership election in a bid to take over from Jeremy Corbyn

Another ‘non-Corbynista’,Jess Phillips, who launched her campaign on Friday, was in third position.

The drive to reverse the hard-Left’s control of the party is being led by a combination of Jewish members outraged by Mr Corbyn’s failure to deal with antisemitism and a new ‘Reclaiming Labour’ movement aiming to rebuild a ‘credible’ party.

An email seen by The Mail on Sunday shows that Finchley and Golders Green Labour Party has contacted former party members to ask them if they ‘would consider rejoining ahead of the prospective leadership contest’.

The message – described by one recipient as ‘a siren call to mainstream Jews who left in disgust’ – says: ‘Rejoining members will be able to play a significant role in how the selection proceeds and it’s important to us that your voice is included if possible. 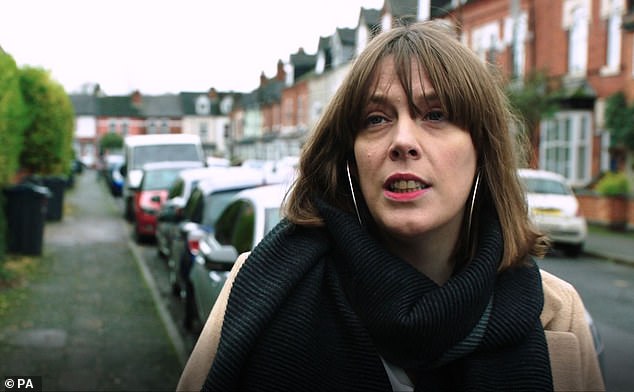 Third place: Jess Phillips is also in the Labour leadership contest and vows to bring a different stance to the role

‘If for whatever reason you feel you are unable to rejoin the party itself but would still like to have a vote in the final election, you can still be eligible by being a member of a recognised socialist society such as The Fabians or The Jewish Labour Movement or an affiliated trade union like Community or the GMB.’

The same techniques were used by hard-Left backers of the pro-Corbyn Momentum group to secure his shock leadership victory in 2015.

But separately, party moderates including the Blairite ‘Progress’ group and the Labour First organisation have launched a Reclaiming Labour campaign to encourage people to join the party ‘and have a role choosing the next Leader’.

In an unashamedly anti-Corbyn tone last week, the campaign noted that the December 12 Election result amounted to the ‘public’s rejection of Corbynism’ and the party’s ‘worst defeat since 1935’.

Party sources say even without the new campaigns, rejoining activists who quit in disgust at Mr Corbyn have already pushed the Labour membership back up to 540,000.

But last night, moderates voiced fears that the hard-Left which is still in control of Labour’s ruling National Executive Committee (NEC) will tomorrow launch a bid to ‘rig’ the leadership contest by insisting on extensive vetting of new members to weed out ‘non-socialists’.

The NEC meets tomorrow to set the rules for the election and decide a cut-off point for new members and registered supporters who want to join to cast a vote.

One leading moderate said last night: ‘The NEC is heavily Corbynista and we’re worried they’ll do whatever they can to put a spanner in the works to stop someone sensible replacing their beloved Jeremy.’

But there are also signs of bitter splits on the Left, with reports that, despite being the Corbynista favourite, Ms Long Bailey is planning to sack key Corbyn aides Karie Murphy and Seumas Milne if she wins.

Sources claim that ex-Corbyn chief of staff Ms Murphy has retaliated by throwing her weight behind party chairman Ian Lavery as a surprise candidate for the leadership.

However, party advisers facing the axe in the wake of Labour’s disastrous Election result are said to be ‘incandescent’ that Ms Murphy herself, one of the alleged ‘architects of the defeat’, has yet to lose her £90,000-a-year job.

To the staff’s fury, there are also suggestions Mr Corbyn will seek to reward her by nominating her for a peerage, something she strongly denies.