Sir Lindsay Hoyle raised himself into that big, puffed-up green chair, his features radiating a certain humility. Half-smiling, half-panicking, his was the face of an honest farmer whose prized Gloucestershire Old Spot had just been judged best in show at the local fair.

He was, as they say in his native Lancashire, ‘right choofed’.

While his predecessor John Bercow incessantly referred to himself in his inaugural speech, Hoyle spoke only of others. In those end-of-pier, avuncular tones, he congratulated his fellow candidates, declaring every one of them would have made an excellent Speaker. 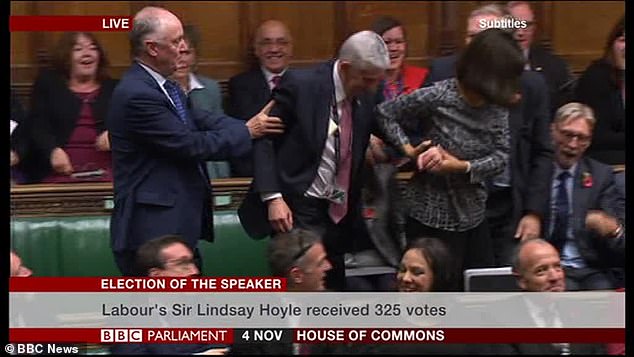 Sir Lindsay Hoyle has been elected Speaker of the House of Commons, today, after receiving 325 votes

There were tributes to his family, perched in the gallery above. Mention, too, of his late daughter Natalie. Lips briefly wobbled.

Cheery, sensitive, modest. In selecting Sir Lindsay as their new headmaster, MPs have opted for the antithesis of the previous incumbent. At last they seem to have got something right.

What a long day of faffing about it had been. Electing a new Speaker is a drawn-out affair. It’s possible some popes have been decided upon quicker.

The Prime Minister, who was required to open the process, looked as though he had better things to be doing. Which he probably did. Jeremy Corbyn didn’t even bother to show until after the second ballot. 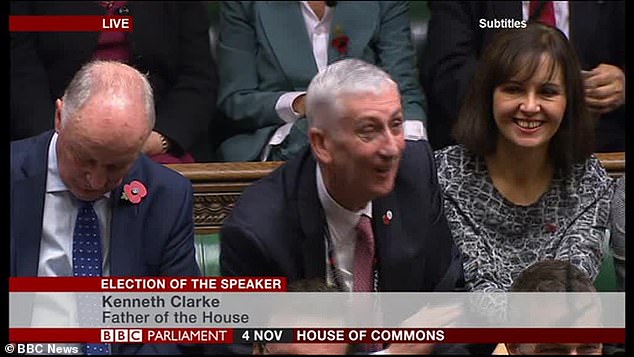 There was at least some respite when Ken Clarke, who as Father of the House presided over events, announced that speeches would be limited to five minutes each.

By far the best pitch came from Chris Bryant (Lab, Rhondda) who finished runner-up. Funny and eloquent, he pledged to restrict PMQs back to half an hour and to ban the increasing trend for clapping in the chamber, which prompted Simon Hoare (Con, North Dorset) and Alistair Burt (Con, North East Bedfordshire) to burst into exaggerated applause. 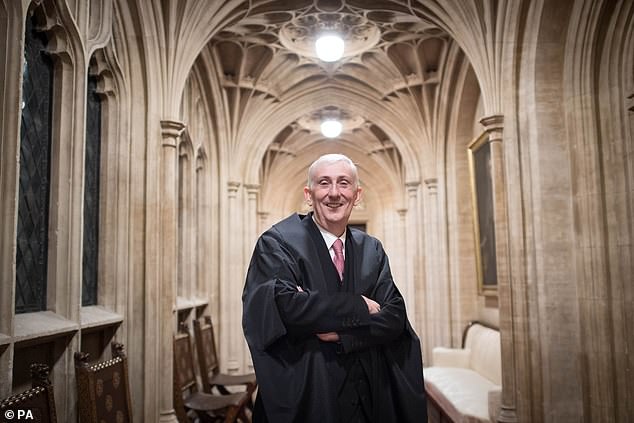 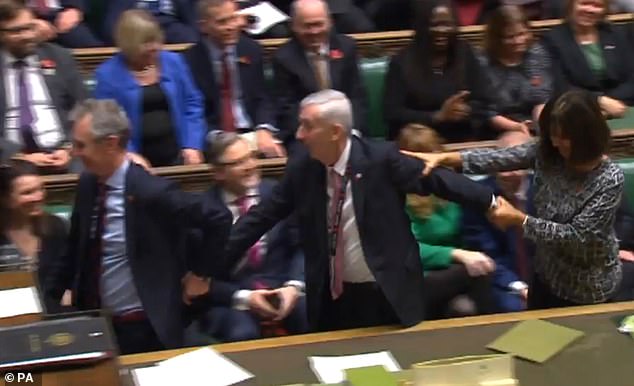 He got an even bigger cheer when he pledged to sort out Parliament’s clunky wifi coverage, in the Commons

He got an even bigger cheer when he pledged to sort out Parliament’s clunky wifi coverage. Dame Rosie Winterton (Lab, Doncaster Central) promised to ‘douse the flames, not pour petrol on them’, a mild dig at her old boss Bercow. She went on too long but nabbed the best laugh of the day when she had the quick wit – as a mobile phone went off – to bark: ‘Order!’

Meg Hillier (Lab, Hackney South and Shoreditch) never got lift-off. She wanted to stuff the human resources department with more busybodies to help stamp out bullying. Not one of Parliament’s sparkier creatures, Hillier. Half way through her speech, Boris let out a gaping yawn.

Harriet Harman (Lab, Camberwell and Peckham) said it was time for the Commons’ second female Speaker. Hattie’s pledge to introduce a fourth deputy speaker gleaned from one of the minority parties didn’t get the reaction she hoped. Disapproving murmurs reverberated around the chamber. 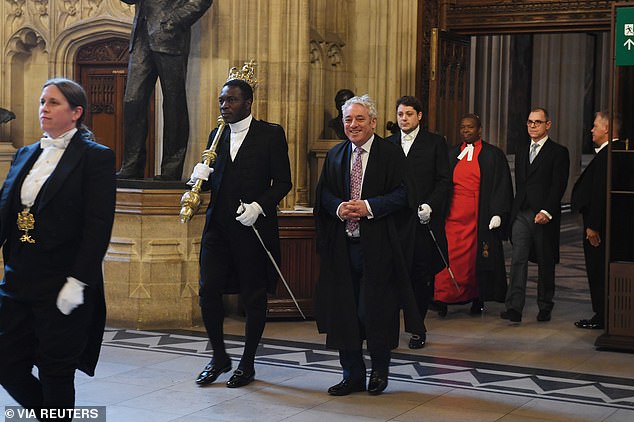 John Bercow is pictured nn his final day in Parliament Mr Bercow looked relieved but emotional, as he stepped down after 10 years on the job. He will also resign as MP for Buckingham – a seat he has held for 22 years

The most disappointing turn came from Dame Eleanor Laing (Con, Epping Forest) who spoke poorly and said little of any great note. There was syrupy reference to her Scottish upbringing – ‘Who would ever have thought of little Eleanor from across the road would one day run for Speaker?’ she asked a trifle self-indulgently. Sir Lindsay did alright, highlighting his lengthy track record as Deputy Speaker and everything he had done for ‘this ’ouse’, without sounding too boastful. He paid tribute to his hero, Baroness Boothroyd, sat up in the Commons gallery.

Betty smiled down appreciatively through a pair of giant Jackie O dark glasses which made her look like a Mafia don’s widow. As Hoyle’s speech started to drag, his best friend Sir David Crausby (Bolton North East) gave him a gentle tug on the coat tails to indicate it was time to pull stumps.

As MPs made their way to the voting lobbies, Helen Grant (Con, Maidstone and the Weald) gave Harriet Harman a sisterly fist-pump. Hoyle sat nervously, getting reassurance from Caroline Flint (Lab, Don Valley).

A relaxed Prime Minister hung around the dispatch box, matily chatting with his backbenchers in a way that Theresa May probably wouldn’t have. Members grew increasingly frustrated at the cumbersome process. 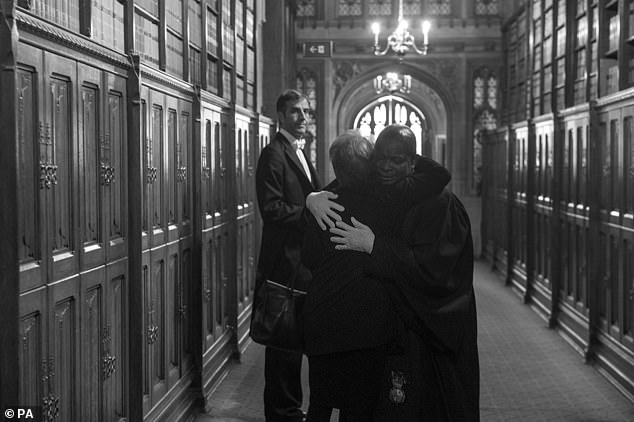 Mr Bercow will be missed by his colleagues, including Speaker’s Chaplain the Reverend Rose Hudson-Wilkin (pictured embracing above) who is pictured embracing him in the final moments before he leaves the Common

Between votes, various items such as footballs and order papers were handed around to be signed, handy knick-knacks, one presumes, for constituency fundraisers. At one point, John Spellar (Lab, Warley) stood and huffily demanded to know, not unreasonably, why ballot papers needed to be reprinted every time someone was eliminated.

Hillier and Sir Edward Leigh were first to go. Winterton, who should really have quit then, fought on for another round. Harman then withdrew. We ended up with a straight shoot-off between Hoyle and Bryant.

The result came just before 8.30pm. When it was announced, Sir Lindsay blew out his cheeks. Lisa Nandy (Lab, Wigan) patted his arm warmly. Nigel Evans and Caroline Flint shared the honours in dragging him to the chair. Outside, the bongs of Big Ben sounded again as the old bell was tested ahead of its appearance at Remembrance Sunday. Parliament is finally ringing the changes.

Girl, three, dies of cancer four days after being sent home from hospital with constipation
Home squeak home! Wildlife photographer creates a playground for family of mice in Sheffield
The Lancashire pig farmer who could knock out Tyson Fury
Ex-England player Brian Moore tells Boris Johnson to 'f*** off' after he wishes team 'best of luck'
Police admit they have no idea whether speedboat killer has fled the country
Mother’s tears for 14-year-old murdered 'in cold blood'
America's newest crew capsule rockets toward space station
Teenage girl 'faints in shock' after Mickey Mouse gives her a 'long, long, long kiss' at Disneyland