The beauty industry has today issued a rallying plea urging Boris Johnson to reopen the sector as it continues to lose millions of pounds and countless job losses.

Skin care guru Caroline Hirons has penned an impassioned letter to the Prime Minister asking for the government to open beauty clinics on August 15.

The letter, delivered to Downing Street last night, calls on the government to give the green light for salons to reopen as staff have been left for five months without an income.

Labour MP Carolyn Harris told MailOnline that the sector had been ‘forgotten’ amid the pandemic with workers ‘left adrift and financially in ruin’.

The beauty sector contributes around £30 billion annually to the UK economy alone with 370,000 people – or one in every 60 jobs – employed by the industry. 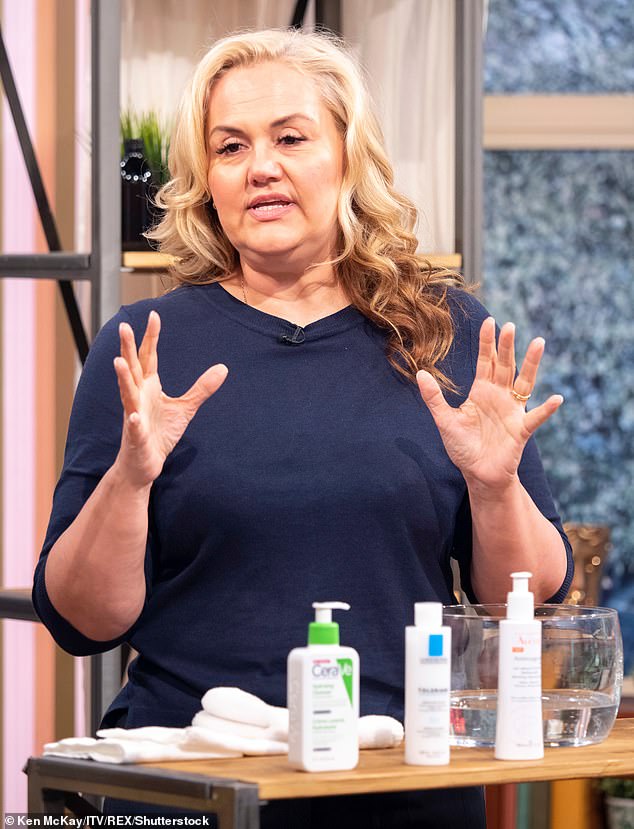 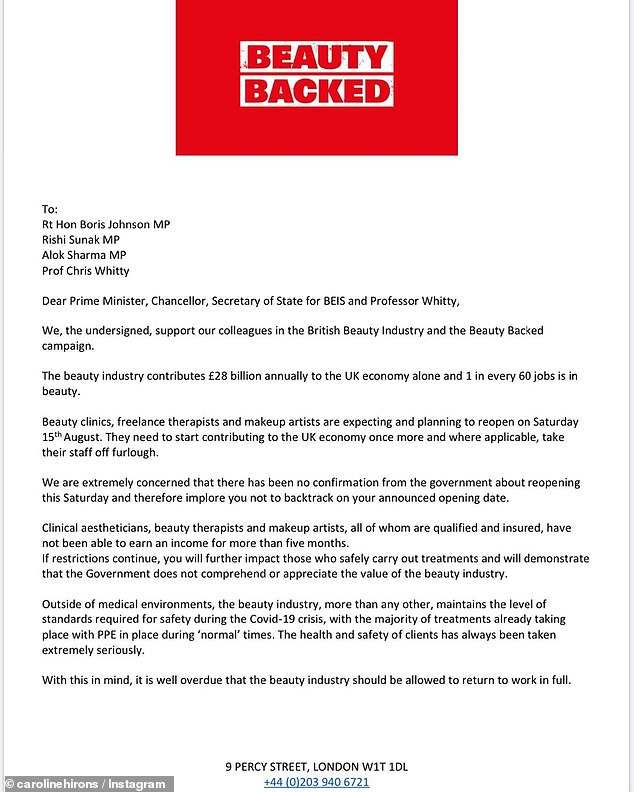 The letter, delivered to Downing Street last night, calls on the government to give the green light for salons to reopen as staff have been left for five months without an income

Bestselling author Caroline Hirons, 50, has gained a huge following on her blog and social media with her straightforward, easy-to-follow tutorials.

Miss Hirons, who has 440,000 followers on Instagram, runs a brand and retail consulting business and is a qualified facialist after working her way up from the shop floor.

She was the driving force behind the letter which states: ‘Beauty clinics, freelance therapists and makeup artists are expecting and planning to reopen on Saturday 15th August. They need to start contributing to the UK economy once more and where applicable, take their staff off furlough.

‘Clinical aestheticians, beauty therapists and makeup artists, all of whom are qualified and insured, have not been able to earn an income for more than five months.

‘If restrictions continue, you will further impact those who safely carry out treatments and will demonstrate that the Government does not comprehend or appreciate the value of the beauty industry.’

MP Carolyn Harris told MailOnline: ‘The economic damage done to this industry is beyond belief. It’s the forgotten sector.

‘There has been no thought given to how these professionals would survive through and pandemic, and after. They’ve had nothing in comparisons to other industries.

‘The victims of this are going to be working class women who’ve gone to college and done a qualification to allow them to be self-sufficient so they could continue to work while earning a nice living.

‘In the UK, there are 370,000 people employed by this industry – mostly women – who have been put in a very precarious position because they couldn’t claim any of the support the government was offering.

‘They’ve been left adrift and financially in ruin.’

Ms Harris said even ‘big, established companies’ has suffered as they remain unable to pass on supplies.

She added: ‘The knock-on effect is incredible. I don’t think anybody can underestimate not only the feel good factor, but the mental health side of things.

‘Everyone needs me-time, reflection and a little bit of TLC and we can get that from a simple treatment.

‘The sector has always been one of the most hygienic and would have been the best place to go back to work. I am desperately worried about the industry, workers and fearful about the loss of jobs.

‘Even in a recession, people will go to buy beauty treatments. That’s the one industry that never felt the impact from the previous recession because people want to feel good about themselves and how they look.

‘This is such an important industry that’s always been overlooked and dismissed as just pink and fluffy.

‘There’s still an opportunity for the government to get this right. We’ve written to the Chancellor and asked him to give it serious thought.’