Zoe Ball’s Radio 2 Breakfast Show debut appears to have gone down well with many listeners – but some admitted they would be following Chris Evans to Virgin Radio.

The DJ, 48, is the first female host of the flagship programme in its 51-year history and her first show started with Aretha Franklin’s feminist anthem Respect saying: ‘It had to be a dame’.

Ms Ball has become the BBC’s highest paid woman after being handed a £1.2million a year salary and arrived at Wogan House in London clutching a bag emblazoned with the words ‘hold it together’.

Taking to the air she admitted to some nerves and declared: ‘Welcome to the first ever Zoe Ball Breakfast Show, I’ve been so excited about saying that.’

Radio 2’s breakfast show is listened to by around 9million people every week and many praised Zoe’s music-heavy debut saying they preferred her to ‘Mr Shouty’ – critics’ nickname for Chris Evans.

Ian Rudd said: ‘Don’t have to be up for another hour or so but set the alarm because I did not want to miss this event. Loving it’ and another Twitter user added: ‘I’m already hooked – go Zoe Ball.’

Others were less sure including Linda Davies Carr, who tweeted: ‘So I’ve given Zoe Ball 30 minutes and I miss Chris Evans…..Can’t wait for Monday 21st to hear him back on the radio’ and one critic said simply: Radio 2 what have you done….bye #zoeball’. 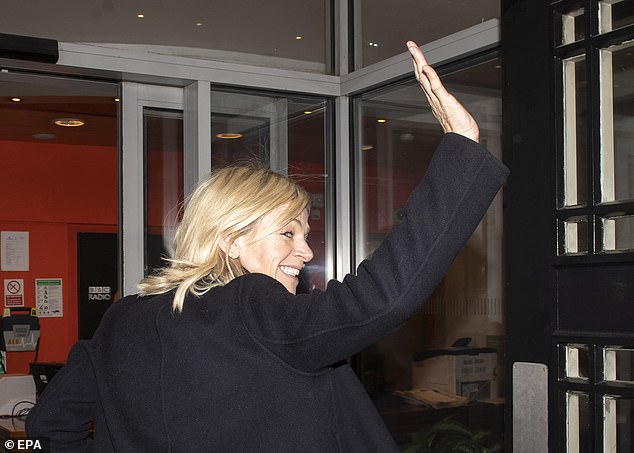 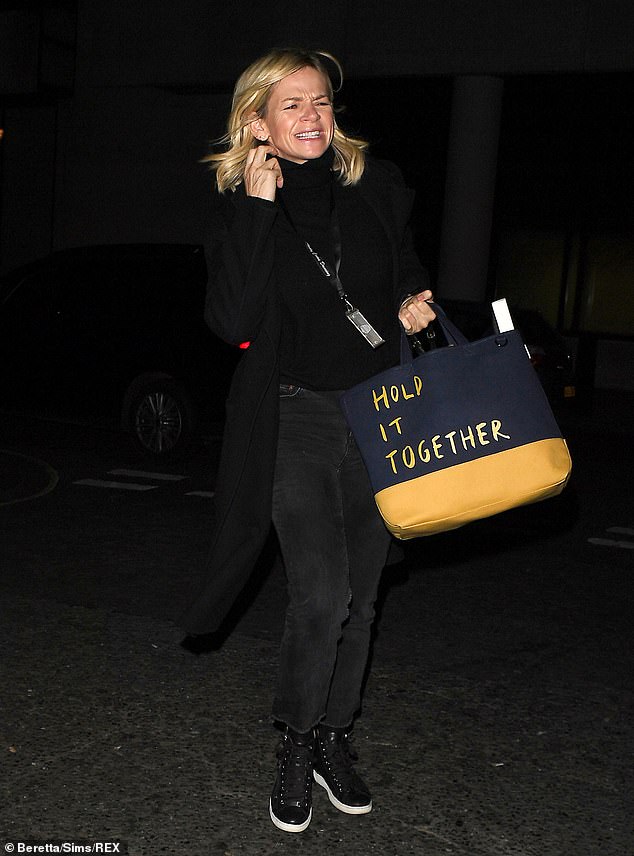 She arrived clutching a bag emblazoned with the words ‘hold it together’ as she took over from Chris Evans, who has moved back to Virgin Radio.

Kicking off the show this morning she said: ‘Hello. My name is Zoe. How’s your belly off for spots? Good morning Radio 2 superstar listeners, here we go.

‘And, relax. After all the build-up, and the chat and the preamble, the big day is finally here. We are so super-excited. I’m ready.’ 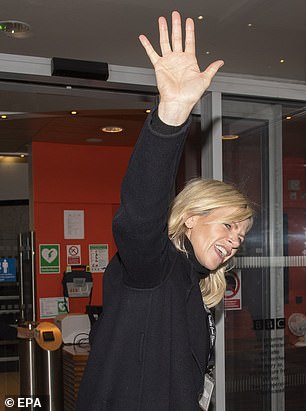 On Twitter fans said they were ‘already hooked’ while some said they woke up early for the show.

@petemac241 wrote: ‘Zoe Ball we don’t want to wake up to Cher please. Radio 2 listeners are not deaf’.

She welcomed listeners to the ‘Zoe Ball Breakfast Show’ and added: ‘I’ve been so excited about saying that.’

She told listeners that her guests on the show will include John Cleese and Nadiya Hussain.

Before the show, speaking on BBC One’s The One Show, she told viewers her famous guest line-up for the show included Saoirse Ronan and Hugh Jackman.

Zoe previously touched on the ‘giant footsteps’ she will be filling as she takes on the baton from Chris to host the show.

‘I’m absolutely thrilled to be following in the giant footsteps of Chris Evans as the host of the Radio 2 Breakfast Show,’ she said. 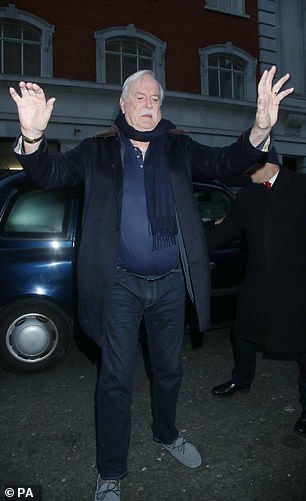 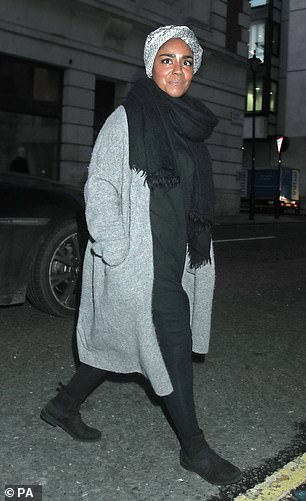 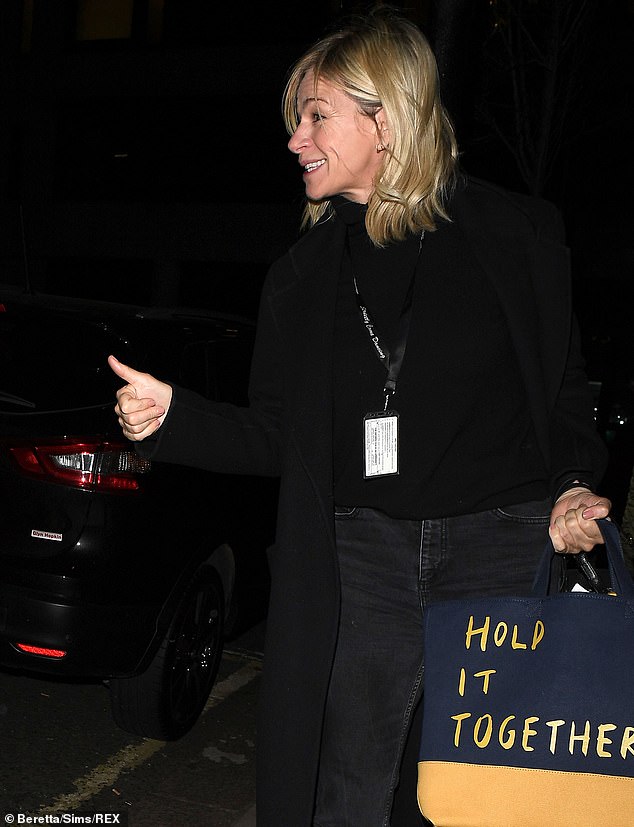 She enthused: ‘To be the first woman to present this very special show is both an honour and privilege.

‘Believe me, I’m not underestimating the enormity of the task ahead, to follow not one but two of my broadcasting idols, into such a well-loved show is somewhat daunting but I hope, in the same way that Chris made this show his own after taking over from the wonderful Sir Terry Wogan, that with a top team alongside me, I can bring the fabulous Radio 2 audience a show they want to wake up to.’

Zoe Ball reportedly fell out with DJ friend Sara Cox who previously stood in for Chris Evans after she landed the role.

Sara, 44, was said to be expecting the gig after having previously stood in for Chris over the years – and was left ‘completely gutted’ after the announcement that Zoe had bagged the honour, according to the publication.

However, a source told MailOnline this was purely ‘speculation’. 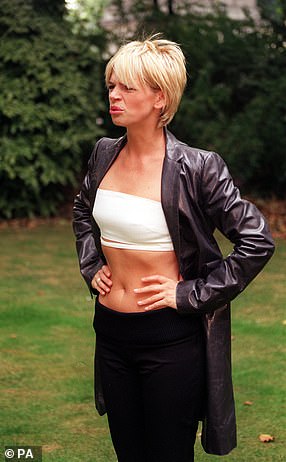 Broadcaster Zoe Ball is to take over fronting the BBC Radio 2 breakfast show from Chris Evans – 20 years after she took over the Radio 1 gig.

The daughter of former children’s TV presenter Johnny Ball first appearance came as a child when she sat in the audience on Saturday Superstore when her father was a guest on the 1980s show.

Her TV presenting roles include Channel 4 morning show The Big Breakfast and BBC Saturday morning children’s programme Live And Kicking, which she co-hosted with Jamie Theakston between 1996 and 1999.

After Live And Kicking, Ball and Theakston teamed up once more for a chat show on Channel 4 called The Priory, which was commissioned by outgoing Radio 2 breakfast show host Evans’ then company Ginger Productions.

Ball was then first solo female Radio 1 breakfast show host as Evans’ replacement, she is the first woman to present the equivalent on Radio 2.

She was a regular presenter of Top Of The Pops between 1996 and 1998 and she co-hosted the Brit Awards in 2002 with comedian Frank Skinner.

Away from work she has also hit the headlines.

The broadcaster has two children from her 18-year marriage to DJ Norman Cook, aka Fatboy Slim, 17-year-old son Woody and daughter Nelly, eight.

The couple announced their separation in 2016 and a year later tragedy struck when her new boyfriend took her own life.

During a special programme called Zoe Ball’s Hardest Road Home, which aired in March this year, she spoke about the loss of her former partner, cameraman Billy Yates, who was found dead at his home in 2017 at the age of 40.

As part of the documentary Ball cycled more than 350 miles over five days, from her birthplace of Blackpool to her home town of Brighton.

She raised more than £1 million for Sport Relief as well as awareness for mental health causes.

In June this year she shared her pride at marking two years of sobriety. She shared an image on Instagram saying: ‘I have been sober from alcohol for 2 years.’

She wrote: ‘Special moment. 2 years no booze – through two of the toughest years of my life, I’m not sure I’d have survived intact had it had not been for my sobriety & recovery’.