THE Spice Girls made a triumphant return in front of 75,000 fans last night for their first gig in seven years.

Ginger, Baby, Sporty and Scary reunited at Dublin’s Croke Park for a gig almost four years in the making — with absent Posh wishing them luck on Instagram.

And in an emotional video montage halfway through the show, each of the foursome had recorded a gushing tribute to Victoria’s input, adding: “She will always be a Spice Girl.”

In a set list packed with hits, the group opened the show by emerging from beneath the stage with Spice Up Your Life — one of their nine UK number ones.

The show featured six “acts” and a total of 24 costumes between the bandmates — including a demure update of Ginger Spice Geri Horner’s Union flag dress after she refused to wear the revealing original.

Pictures from the final dress rehearsal also show Mel C (Sporty) in a navy halterneck top, Emma Bunton (Baby) in a figure-hugging dress with a fluffy pink jacket, and Mel B (Scary) in thigh-high gold boots.

The gig was the girls’ first in seven years[/caption]

Pyrotechnics and dancers accompanied hits including Wannabe, Two Become One and Mama.

“Emma, you’ll always be my little sister, (much to your annoyance) who I want to protect.

“Melanie B you’re amazing up on that stage, Victoria you’ll be missed, but here in spirit and Melanie C, what strength and focus you give us all, thank you. I love you all.”

The Spice Girls went to number one with their debut single Wannabe in 1996 and went on to become the biggest-selling girl group of all time, selling 85million records.

Geri left the band in 1998 and in 2000 the group said they were taking an indefinite hiatus to concentrate on solo careers — but never officially split.

Their last official performance together was at the closing ceremony of the London Olympics in 2012.

Stacey Solomon introduces her newborn to her sons in touching pics

They have been in talks about getting back together on and off since August 2015.

But The Sun confirmed last year that one of the most anticipated pop reunions of all time was finally on — albeit without Posh.

They are performing 13 sold-out stadium shows ending with three nights at Wembley in London next month. 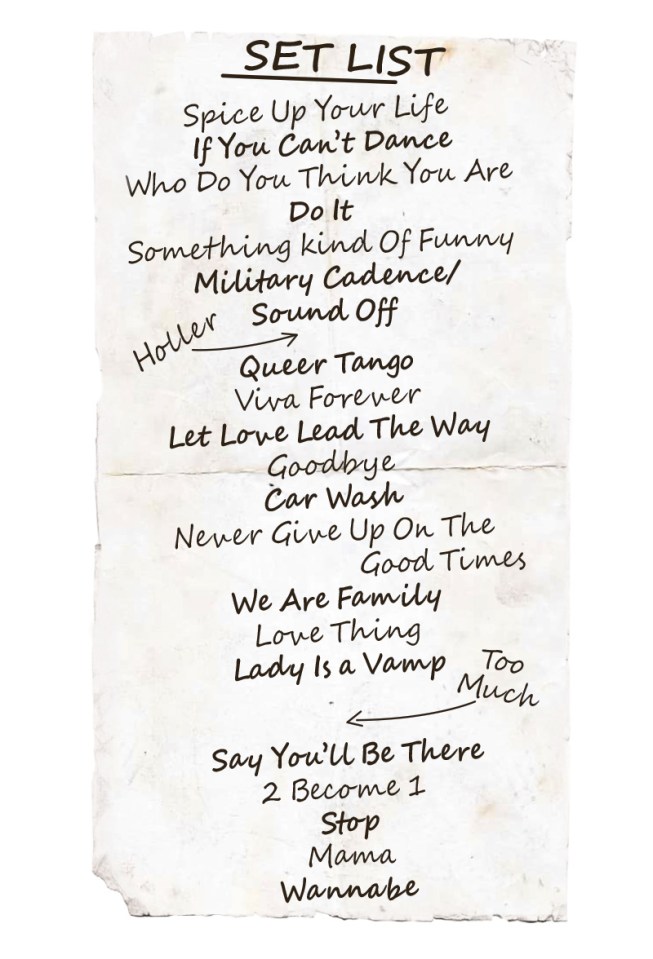