The St. Louis couple who brandished their guns at Black Lives Matter protesters outside their home in June are suing a photographer who took their photograph, claiming they have suffered ‘humiliation, mental anguish, and severe emotional distress’.

Mark and Patricia McCloskey are facing felony charges for waving guns at protesters who marched near their home, and allege in a lawsuit that a news photographer trespassed to capture an image of the confrontation.

The McCloskeys, lawyers in their 60s, filed the lawsuit Friday in St. Louis Circuit Court against United Press International photographer Bill Greenblatt and the wire service.

At issue was a protest on June 28, when a few hundred marchers veered onto the private street near the the McCloskeys’ $1.15 million home in St. Louis’ posh Central West End area.

Mark McCloskey, 63, and Patricia McCloskey, 61, who were charged with brandishing guns at protesters outside their mansion earlier this year, are suing the photographer who took the pictures. Several hundred demonstrators on June 28 veered onto the private street where the McCloskey’s Renaissance palazzo-style mansion sits 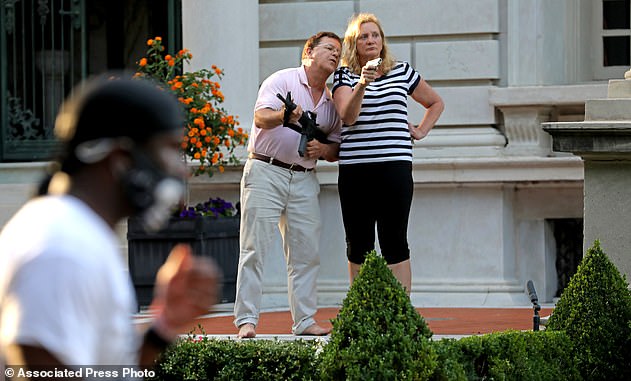 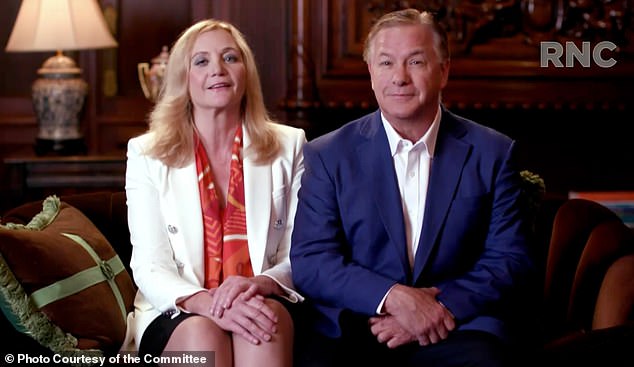 The McCloskeys have become celebrities in conservative circles. The couple claim the photos of them have contributed to their ‘significant national recognition and infamy’ 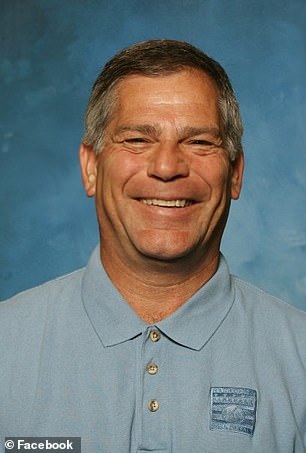 The pair are suing United Press International photographer Bill Greenblatt and the wire service he worked for accusing him of trespassing on their $1.15m property

Mark McCloskey emerged with an AR-15 rifle and his wife displayed a semiautomatic handgun.

Newspaper photographers are allowed to capture images from public rights of way.

The McCloskeys live on a private street and have argued that protesters were trespassing. No one was hurt, and the McCloskeys have pleaded not guilty to unlawful use of a weapon and evidence tampering.

The couple said Greenblatt’s photo has contributed to their ‘significant national recognition and infamy.’ In addition to Greenblatt and the news service, the McCloskeys are suing Redbubble Inc., a San Francisco-based online marketplace for print-on-demand products.

The McCloskeys allege that Greenblatt, UPI, and Redbubble are all profiting from ‘t-shirts, masks, and other items, and licensing use of photographs bearing Plaintiffs´ likenesses, without obtaining Plaintiffs´ consent.’ 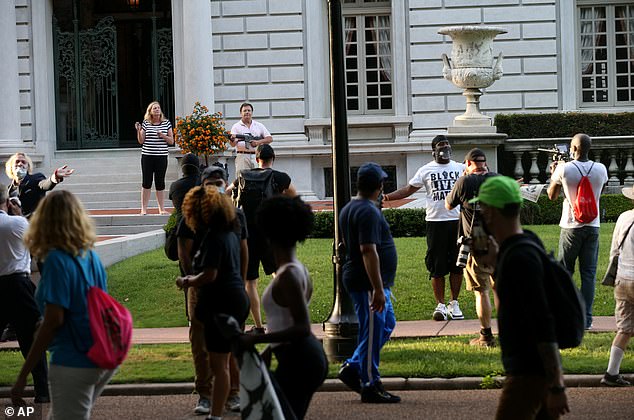 Mark and Patricia McCloskey are seen confronting some of the 300 protesters who marched to St. Louis Mayor Lyda Krewson’s house on June 28.

Often their image on merchandise sold by Redbubble is accompanied with ‘mocking and pejorative taglines or captions,’ causing them ‘humiliation, mental anguish, and severe emotional distress,’ the suit alleges.

Meanwhile, UPI said recently it was considering whether to send a ‘cease and desist’ order to the couple because of their use of the UPI photo as part of a personal greeting card.

Greenblatt referred all questions to the UPI director of photography in Washington, D.C., who could not be reached for comment.

Redbubble didn’t immediately respond to an email from The Associated Press.

No attorney is listed for any of the defendants in online court records. 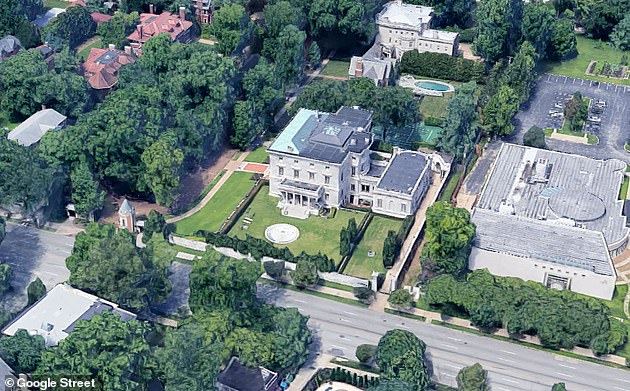 The $1.15 million home of the McCluskey’s is seen above

Protesters gathered outside the home of Mark and Patricia McCloskey during a protest against racial inequality in St Louis, Missouri 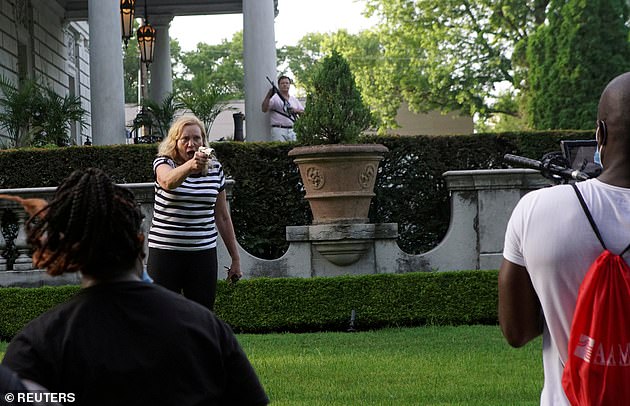 Patricia McCloskey and her husband Mark McCloskey drew their firearms on protestors in St. Louis on June 28 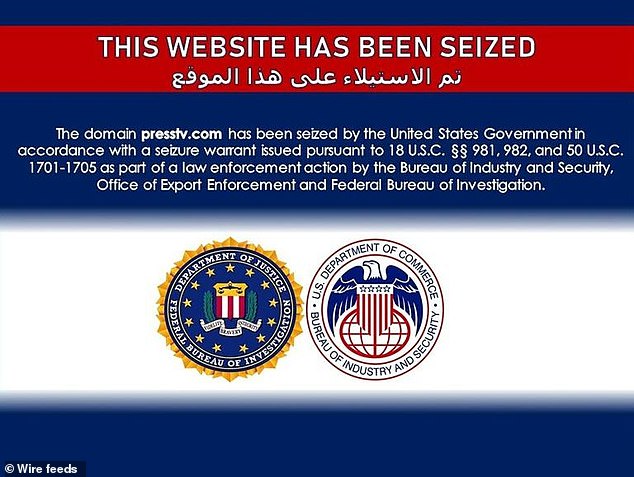 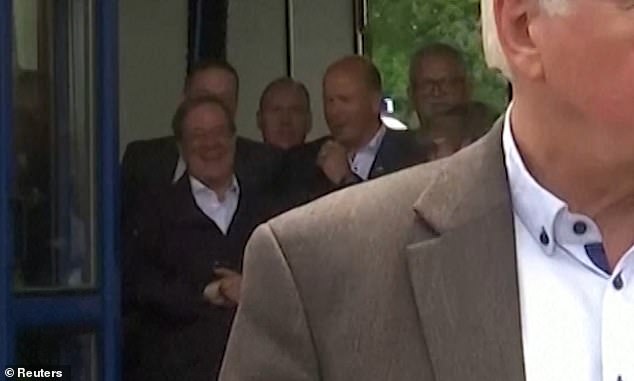 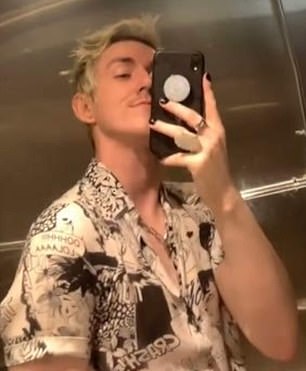 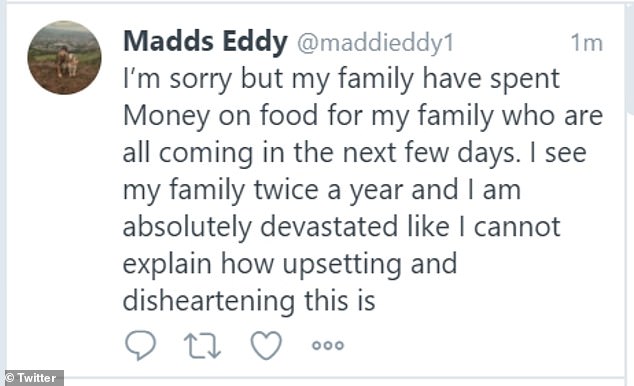 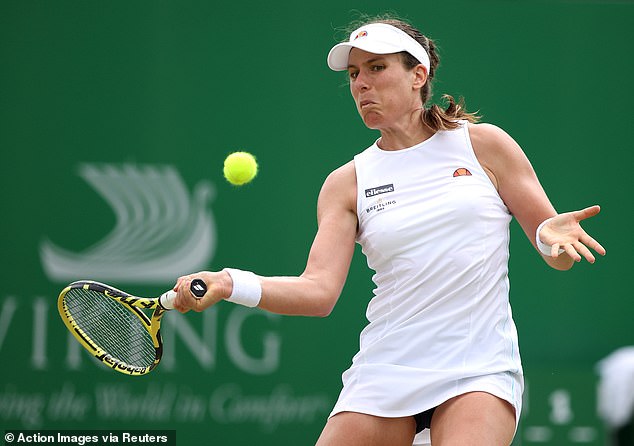 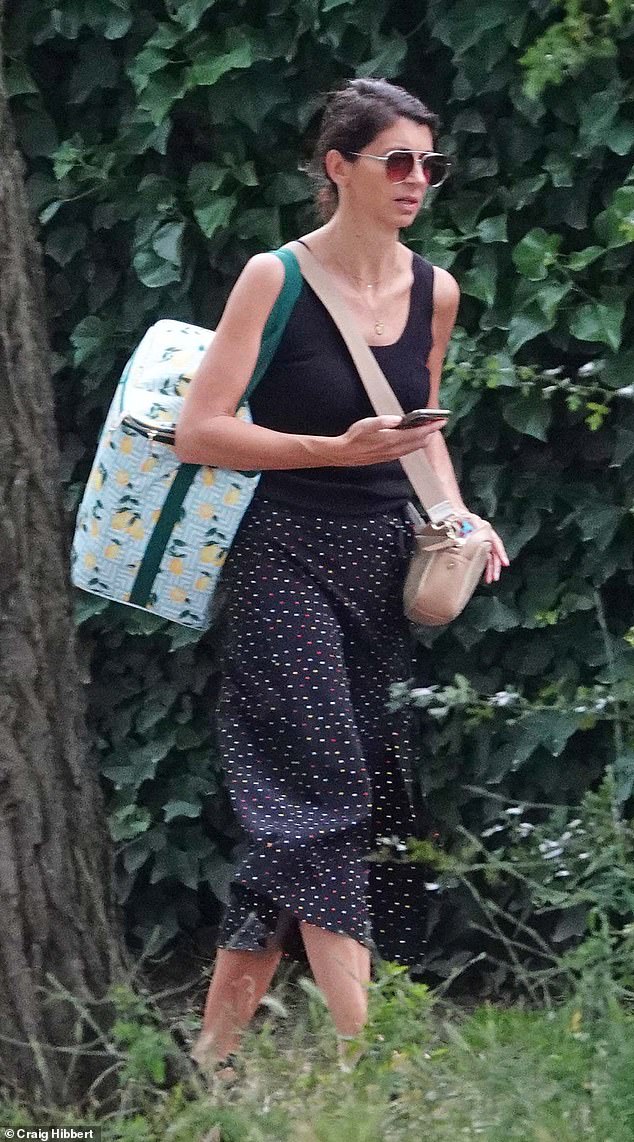 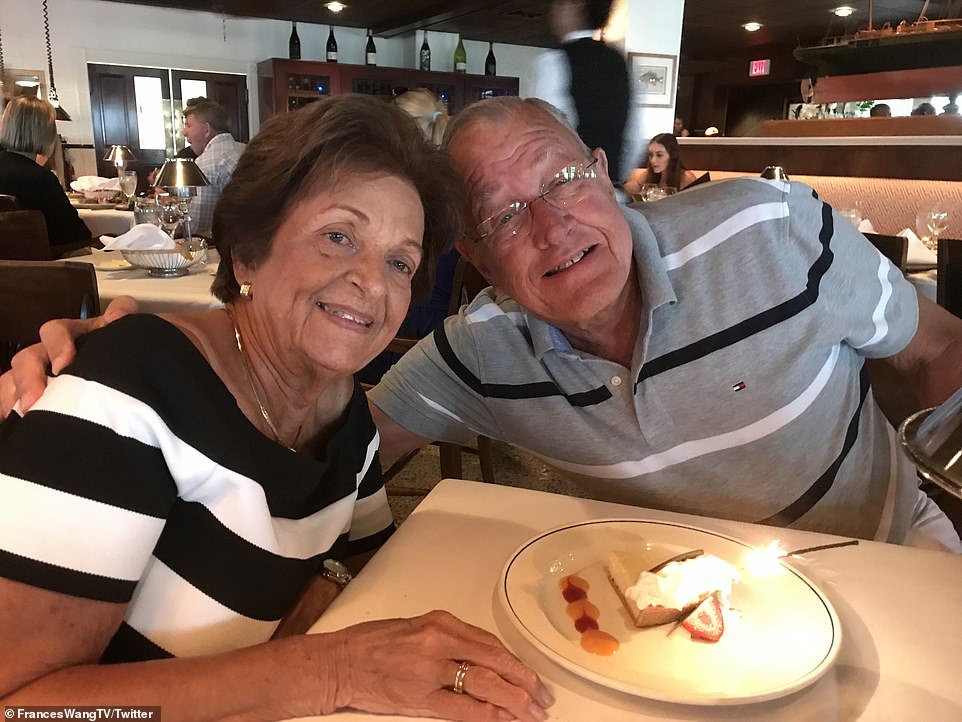 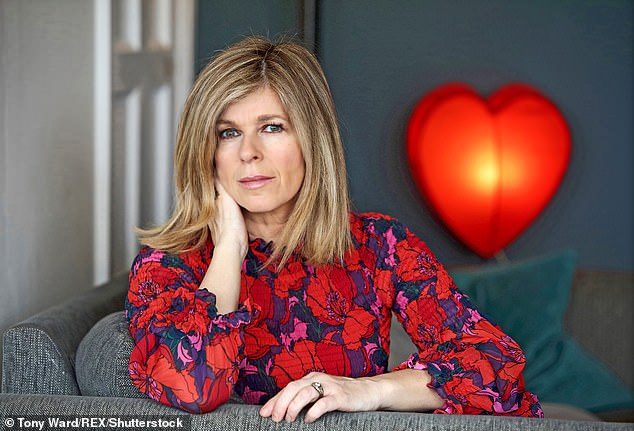