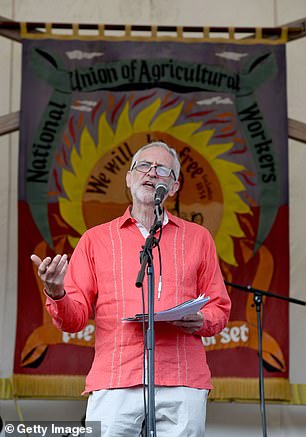 Grassroot support for Mr Corbyn, picture yesterday in Tolpuddle, has dropped by 24 points since March

Two fifths of Labour members now want Jeremy Corbyn to stand down before the next election, a poll has found.

Confidence in Mr Corbyn’s leadership has plummeted by 24 points since March last year.

The YouGov survey for the Times found that 43 per cent of Labour members say he is doing a bad job.

Amid growing dissatisfaction with Mr Corbyn’s handling of Brexit and the continuing anti-Semitism crisis, one in four want him to step down immediately.

More than half are dissatisfied with the way in which the Labour leader, and 70 per cent say that antisemitism is a ‘genuine’ problem.

Sir Keir Starmer, the shadow Brexit secretary, has the most support to succeed him, with 68 per cent of members saying that he would make a ‘good’ or ‘very good’ leader.

Mr Corbyn won more than 60 per cent of the members’ vote when standing against Owen Smith.

However, the online poll of 1,100 Labour Party members has found a growing dissatisfaction with Mr Corbyn’s performance among those who used to support him.

In March last year 74 per cent of Labour members said that Mr Corbyn should lead the party into the next general election, a figure that has now fallen to 56 per cent. 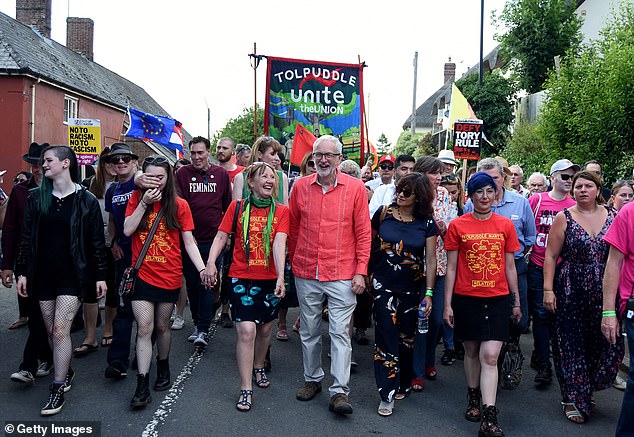 A quarter of Labour voters say Jeremy Corbyn should stand down as the party’s leader immediately. Mr Corbyn was pictured matching with activists in Tolpuddle yesterday. 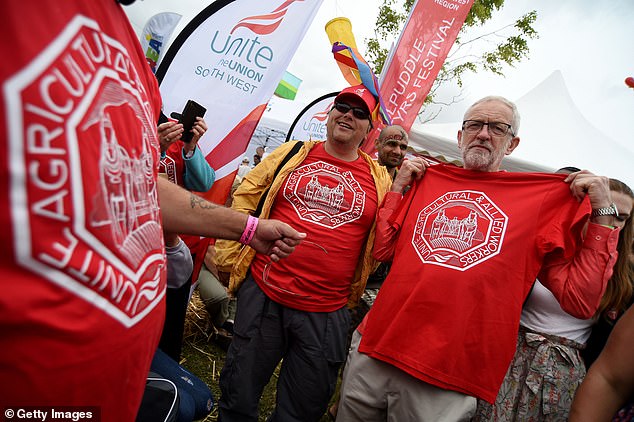 Another 12 per cent think that he should stay on for the time being but step down before an election is called; 27 per cent want him to go now.

The number of Labour members who think Mr Corbyn is doing ‘very badly’ as leader has risen from 8 per cent to 18 per cent; a further quarter say that he is doing ‘fairly badly’.

The poll also reveals that it is Mr Corbyn’s leadership rather than his wider policy agenda that is the cause for concern. More than 80 per cent still think that he has got the ‘right priorities for the country’.

The next few days are expected to be critical for the Labour leader, who is facing a revolt over his failure to agree to an independent complaints process to investigate claims of antisemitism.

Mr Corbyn is due to address the shadow cabinet today followed by a meeting with Labour MPs tonight. Tomorrow he will appear before Labour’s ruling national executive amid demands for a change in approach.

One shadow cabinet backer of Mr Corbyn told The Times that he ‘had to move’, warning that the anti-Semitism controversy was now alarming even his natural supporters.

‘This can’t go on,’ he said. ‘I think even people like Seamus [Milne, his head of communications] now accept that.’

Coronavirus claims 651 lives in 24 hours in Italy bringing devastating death toll to 5,476
British pensioner, 68, is feared dead after his motor boat goes up in flames off Lanzarote
First Briton to contract coronavirus claims he shook off infection with hot toddy of whisky
Google CEO begs regulators not to split company up
Medical student who stabbed her Tinder date with a breadknife QUITS Oxford early
BC-SOC--Italian Standings
Harvey Weinstein wins minor victory as prosecutors dismiss one charge in sex assault case
Billy Connolly, 76, says his 'life is slipping away' as he speaks about Parkinson's disease