Syphilis cases have soared by 70 per cent in Europe since 2010, data shows.

A report reveals the sexually transmitted infection (STI) reached an all-time high in 2017, with 33,189 confirmed cases in 28 countries across the continent.

Although an issue throughout Europe, cases of the STI more than doubled between 2010 and 2017 in five countries, including Britain.

Once considered a ‘Victorian disease’, some countries even saw more new cases of syphilis than HIV, the report found.

Researchers from Sweden blame unprotected sex, ‘riskier behaviours among gay men’ and a ‘reduced fear of HIV’ for the surge in syphilis, which can be deadly if untreated.

The report also said people having ‘chemsex’ – sex while high on drugs – was a risk factor for the spread of the illness, and experts have in the past blamed dating apps for leading to more people having casual sex. 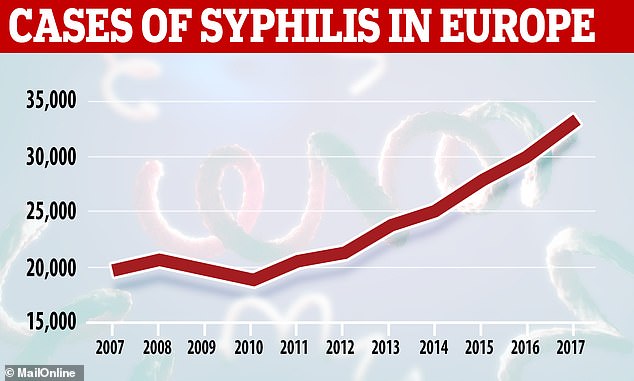 The report was put together by the European Centre for Disease Prevention and Control (ECDC) in Stockholm and led by Dr Andrew Amato-Gauci, head of the HIV, STI and hepatitis programme.

‘The increases in syphilis infections that we see across Europe are a result of several factors,’ Dr Amato-Gauci said.

‘Such as people having sex without condoms and multiple sexual partners, combined with a reduced fear of acquiring HIV,’ Reuters reported.

The ECDC analysed data for 2017 from The European Surveillance System, which records the rate of infectious diseases throughout the continent.

This was compared against a previous report of theirs that looked at syphilis rates as far back as 2010.

Europe even had more reported cases of the Victorian STI than HIV for the first time since the early 2000s.

The problem varied between countries, with the UK, Belgium, France, Germany, Malta and the Netherlands seeing cases more than double from 2010-to-2017.

Syphilis is a bacterial infection that is usually caught by having sex with an infected person.

Infected pregnant women can pass the STI to their unborn babies, which can lead to miscarriages or stillbirths.

Syphilis can also be spread by sharing needles with an infected person.

Symptoms are not always obvious and may eventually disappear.

If untreated, syphilis can spread to the brain or elsewhere in the body and cause disabilities or death.

Treatment is usually an antibiotic injection into the buttocks or a course of tablets.

People can reduce their risk by using condoms during sex, a dental dam (plastic square) in oral sex and avoiding sharing sex toys.

Iceland even ended up with the highest syphilis rate in Europe, with 15.4 people having the STI per 100,000 members of the population.

But in Estonia and Romania, cases more than halved.

Estonia was among the countries with the lowest syphilis rates at three per 100,000 people.

Apps such as Tinder, Grindr and Bumble make it relatively easy for people to meet new sexual partners, meet them quickly and move onto someone else.

This could increase the risk of catching STIs by allowing a quick turnover of partners and make people less likely to contact past partners if they’re diagnosed.

Dr Olwen Williams, president of the British Association of Sexual Health and HIV, told the BBC in October: ‘The frequency of app hook-ups and dating apps used as a sort of medium to access sexual activity seems to have increased significantly.

‘What we can say about sexual mixing and sexual networking is that things have changed considerably. We’re seeing a genuine rise in STIs.’

Two-thirds (67 per cent) of the cases that occurred between 2007 and 2017, where the sexual preferences of the infected were known, were in gay men.

This also varied country-to-country, with more than 80 per cent of cases in France, Germany, Ireland, the Netherlands, Sweden and Britain occurring in homosexual males.

However, gay men made up less than 20 per cent of diagnoses in Latvia, Lithuania and Romania.

Overall in Europe, 23 per cent of cases affected straight men and 15 per cent were in women.

Sexuality aside, men aged between 25 and 34 were the most likely to be infected.

The researchers worry complacency over HIV, particularly among gay men, may be fueling syphilis cases.

‘The introduction of pre-exposure prophylaxis for HIV (PrEP) is likely to also affect future trends in a negative way due to both risk compensation,’ they wrote.

PrEP is a fixed-dose combination of two anti-retroviral drugs, tenofovir and FTC, in one pill.

These medications work together to interfere with an enzyme that HIV uses to infect new cells, which slows down the virus’ attack or prevents it altogether.

The drug is designed for people that have not yet been exposed to the virus to protect themselves against it.

Speaking of Europe’s syphilis problem, Amato-Gauci said: ‘To reverse this trend, we need to encourage people to use condoms consistently with new and casual partners.’

ARE VICTORIA-ERA DISEASES ON THE RISE?

Poor lifestyles are causing a surge of diseases linked to the Victorian era in the UK, experts warned in March 2017.

A fall in living standards and growing financial inequality are thought to be behind a rise in cases of rickets, gout, syphilis and scarlet fever.

Rickets, made famous by Tiny Tim in Charles Dickens’ A Christmas Carol, has increased by 39 per cent between 2009 and 2010.

The disease, which can be caused by a vitamin D deficiency, leaves sufferers with brittle bones and skeletal deformities.

Despite being common in 19th century Britain, it was all but wiped out due to ongoing improvements in nutrition.

It is thought that a fear of contracting skin cancer could be making parents overly cautious about sun exposure, putting youngsters at risk of the condition.

As well as sun exposure, vitamin D can obtained by eating foods such as oily fish, egg yolks and liver.

In January 2017, a think-tank warned rising inflation means poor families are unable to afford nutritious foods to prevent the onslaught of the disease.

The form of arthritis, caused by a build-up of uric acid, a waste product of the body, famously afflicted Henry VIII and was rife in the Victorian era.

An ‘obesity epidemic’ and ageing population is behind the rise in gout in recent times, according to the UK Gout Society.

The rising numbers of people having unprotected sex has been blamed for an increase in syphilis.

Once a death sentence, the vast majority of those infected today are curable via penicillin injections.

Figures for the sexually transmitted infection have nearly doubled in the past eight years, from 2,646 to 5,217, according to Public Health England.

Scarlet fever, which causes a rash, jumped by 198 per cent in a year (stock)

The highly contagious disease causes a sore throat, fever and rash, which can occasionally lead to pneumonia if not treated promptly.

Although fatal in the Victorian era, the disease is restricted to no more than unpleasant symptoms if treated early.