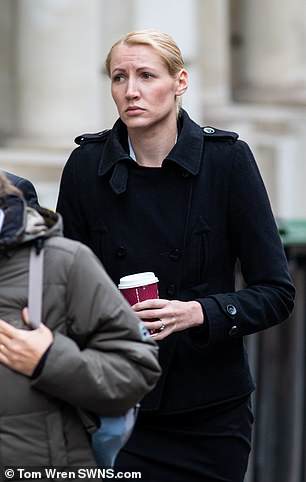 A science teacher who allegedly had sex with a pupil on a plane texted him saying ‘Happy Valentine’s Day’, a court heard.

Ellie Wilson, 29, denies having intercourse with the boy, 16, in the cubicle on the return flight from a school trip to Africa.

But prosecutors claim she lied to ‘cover her tracks’ and tried to blame others to hide the truth of her sexual relationship with the boy.

Wilson allegedly became pregnant from the encounter but she claims her ex-partner was the father.

Being cross-examined on the fifth day of the trial today, told the court she tried to ‘distance’ herself from the boy, but had they exchanged texts.

The teacher said: ‘He texted me saying ‘Happy Valentine’s Day’, [with] no kisses. I texted back saying the same.’

Virginia Cornwall, prosecuting, said Wilson ‘became aroused’ on the night flight and ‘realised an opportunity to continue contact with the boy’.

She said the teacher’s ‘sense of reality had been distorted’ by her feelings for the teenager and that she became attracted to him before the holiday. 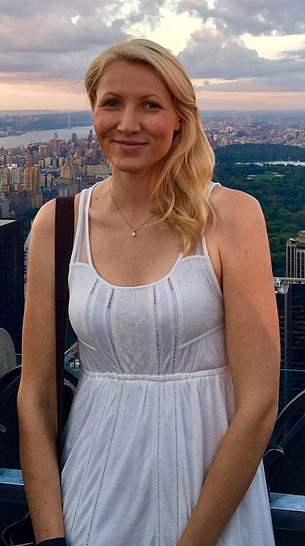 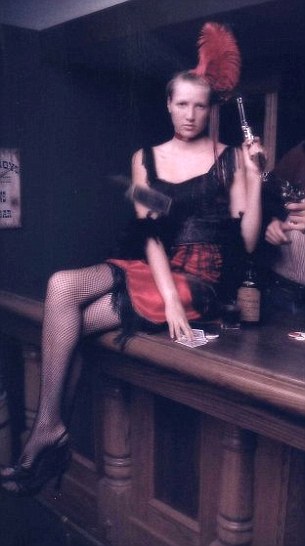 Wilson is accused of having unprotected intercourse with the teenager on the British Airways flight home from a school trip to Swaziland, southern Africa

She said Wilson lied about wearing jeans on the flight because it made the story of their alleged aeroplane sex more unlikely.

Ms Cornwall said: ‘You decided the only way forward was to lie through your teeth. You used him for your own sexual gratification didn’t you?

‘You thought you were in a relationship with the boy. You became dependent on him. You had an attraction to him before Africa, didn’t you?

‘In Africa, you became one of the students and moved down to their level because you liked that level of contact – because you wanted to feel included and liked.

Ms Cornwall said Wilson and the boy’s day out to Tintern Abbey after the trip was ‘effectively a date’.

Wilson admitted their days out together were against school policy and that she didn’t tell anybody about them because she was ‘ashamed’ and afraid of losing her job.

Anna Midgley, defending, asked Wilson why she told the boy she was pregnant.

Wilson said: ‘I got really upset, I was scared. It was inappropriate to tell him.

‘My guard was down and I was upset. I wanted someone else to understand how I was feeling.’

She told the jury: ‘I first became aware that I might be getting pregnant when [her then boyfriend] Andy commented he thought my boobs were getting bigger at the start of September.

‘He said ‘You better not be pregnant – sort that out’.

‘When we first moved to Bristol, a friend had just had a baby and I asked what would happen if we had a baby.

‘Andy scathingly said I ‘would find myself having tripped down to the bottom of the stairs’ and said he’d use a ‘coat hanger to remove it’.’

Wilson, of Dursley, Gloucestershire, denies four charges of sexual activity with a child by a person in a position of trust between August and September 2015.

PETER HITCHENS: Think flogging drug dealers is barbaric?
Mayweather fights with T.I. and 50 Cent over supporting Gucci after blackface controversy
JACK DOYLE: Did Theresa May have a choice but to reach out to Corbyn?
Incredible underwater video shows a huge group of octopuses feasting on the remains of giant whale
Bride slams her bridesmaid online for wanting a long dress because it's 'wedding appropriate'
Family of graduate feared to be among the 39 Essex lorry victims slam the 'cruel and evil' smugglers
Paedophile was shot dead in Italy 'by hitman hired by father of a 15-year-old victim'
Pregnant women using makeup 'more likely to have fat children'