A teacher dubbed ‘The Maths Whisperer’ has led a class of 30 pupils to an A* grade at GCSE six months early.

Francis Elive, 55, has been hailed a hero by his pupils after the entire class achieved top grades.

The teenagers at Fitzalan High School in Leckwith, Cardiff, even sat their maths exam six months early to secure their A* grades as soon as possible. 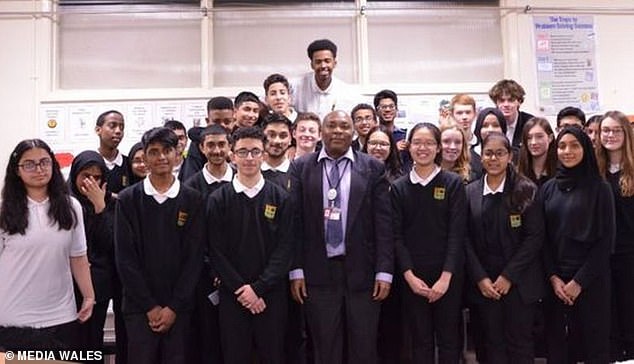 Francis Elive (pictured centre), 55, led his class of 30 pupils to an A* grade at GCSE six months early. The teacher has since been dubbed ‘The Maths Whisperer’

Dedicated Mr Elive – who teaches at the 1,400-pupil high school – has now been praised for his ‘passionate’ approach to his subject.

Assistant Headteacher Jo Kemp says the Year 11 class all opened their results together.

She said: ‘We did a countdown so they all opened their results at the same time. There was a gasp as they saw their results and then all realised they had the same.’

The whole class had been taught by Mr Elive since they started in Year 7 at the school.

They have now dubbed him ‘The Maths Whisperer’ – because some pupils almost got full marks in the exam.

Ms Kemp said: ‘He’s passionate about his subject and he is quite a reserved man but he was just on pins like an expectant dad – how you would want a teacher of your children to be feeling. 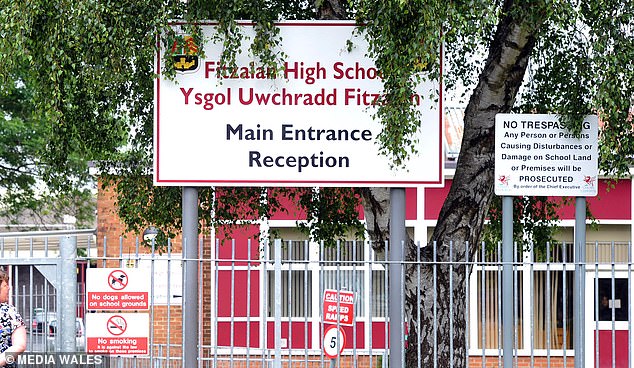 Fitzalan High School in Leckwith, Cardiff (above), describes itself as a ‘highly inclusive and caring community’ and received a ‘double excellent’ at their inspection

‘We call him The Maths Whisperer, he instils the belief that they have practised the hardest maths that they have to ever to face so why be scared of an exam?

‘It’s the belief that they absolutely can do it, and the children think it’s magic.’

Mr Elive added: ‘There’s no secret method. All my pupils have worked very hard and I’m really proud of them.’

The school, which received a ‘double excellent’ at their inspection, describes itself as ‘a highly inclusive and caring community.’

‘Francis is a legend of a teacher. This is a great achievement for our local school. This is an indicator of the direction we are heading. Onwards and upwards.’

The Fitzalan Maths department said: ‘We couldn’t be prouder of this class and Mr Elive. They’ve demonstrated that preparation, hard work and dedication pay off.’