A teaching assistant has told how she woke up from a coma to discover her daughter had been born.

Lisa Davey was brought into A&E at Blackpool Victoria Hospital with a suspected abdominal infection in April 2018.

Doctors discovered she had a tiny tummy bump which they initially thought could be linked to the possible infection.

That was until an ultrasound revealed that Lisa was actually 26 weeks pregnant –  which was a huge surprise to her as she had no clue she was carrying a baby. 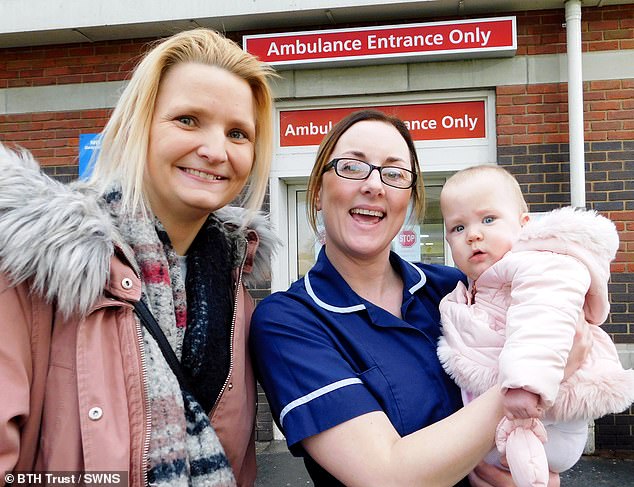 Lisa Davey (left), only found she was pregnant when visited the A&E at Blackpool Victoria Hospital suffering from sepsis.  As a thank you, Lisa named her newborn baby after sister Danielle McLardie (pictured holding Lisa’s baby), 33, who treated the pair in the hospital

The ultrasound also revealed she had developed HELLP syndrome – a rare liver a blood clotting disorder and condition which affects pregnant women – and sepsis.

Her health soon dramatically deteriorated and her organs started to fail.

In a bid to save both mother and baby, doctors decided to take Lisa to theatre for a caesarean section.

Her mum Lisa was moved to the intensive care unit at Blackpool Victoria Hospital and only discovered she was now a new mother when she woke up in her hospital bed.

Lisa had still been working 80-hour weeks and had no idea she was expecting before being taken to hospital.

She said: ‘I couldn’t believe it. I had been working 80 hours a week and lifting heavy boxes.

‘I had no clue I was pregnant. I had no symptoms.

‘When I met my baby girl a week later, I knew I had to call her Danielle after the fantastic care I received from such a wonderful nurse.’

ALisa Davey, 27, decided to call her miracle baby who was born 14 weeks premature, Danielle after nurse Danielle McLardie who treated them.

Ten months on, both mother and baby are doing well and are enjoying a normal life in Blackpool, Lancashire

As a thank you, Lisa named her newborn baby after sister Danielle McLardie, 33, who had just started her shift with Lisa being her first patient. 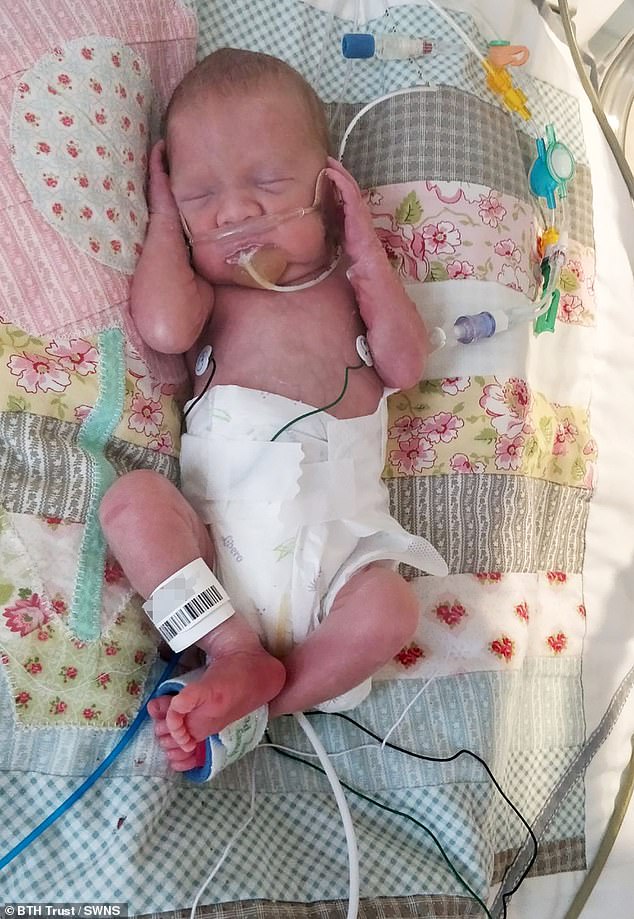 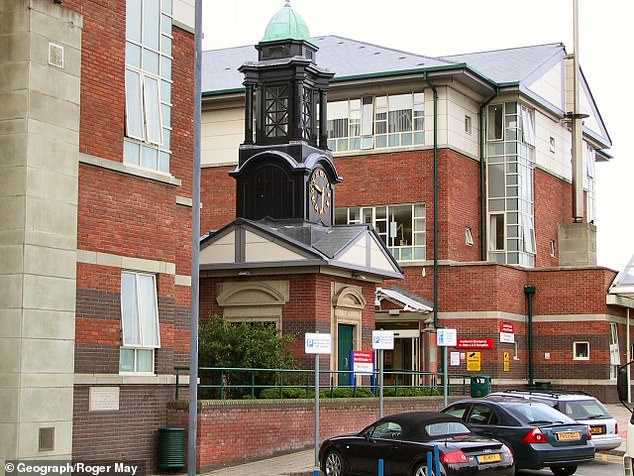 Doctors at Blackpool Victoria Hospital (pictured) discovered she had a tiny tummy bump which they initially thought could be linked to the possible infection.

She said: ‘Lisa was so poorly, we didn’t know her or the baby would make it.

‘Nobody had a clue when she came in that Lisa was pregnant – including Lisa herself.

‘There was only a tiny tummy bump which we thought could be linked to a possible infection.

‘I stayed with Lisa for three and a half hours and visited her each time I was on shift.

‘When Lisa told me the baby’s name, I cried I was so overwhelmed – I was just doing my job.

‘But having such a cute bundle of joy named after me is such a huge honour, it’s the highlight of my career.’

Indian diamond billionaire on the run found in London's West End
Bradley Cooper and Irina Shayk step out together... after his ex-wife takes a jab at him
Katie Piper turns to meditation to 'find the inner strength' as her acid attacker is freed
NASA engineer admits thieves' reactions in his epic revenge package viral video were FAKED
Disgraced Labour MP Kate Osamor says she is 'proud' to live in a council house
Trainee teacher, 19, who feared he was going to be late for work died in head-on crash
'Smart drones' invulnerable to military jamming tools may soon be a threat to British airports
Rape charges against Ronaldo over alleged 2009 Las Vegas attack 'are dropped'