A 13-year-old girl has been arrested on suspicion of assaulting a police officer at a pro-Brexit ‘yellow vest’ protest in London today.

Around 100 far-right demonstrators stopped traffic and set off smoke bombs outside Downing Street as they marched through the capital during the far-right protest.

The teenager was one of four detained after protests on Westminster Bridge, near Parliament, at around 11am. Three men were also arrested on suspicion of public order offences, Metropolitan Police confirmed. 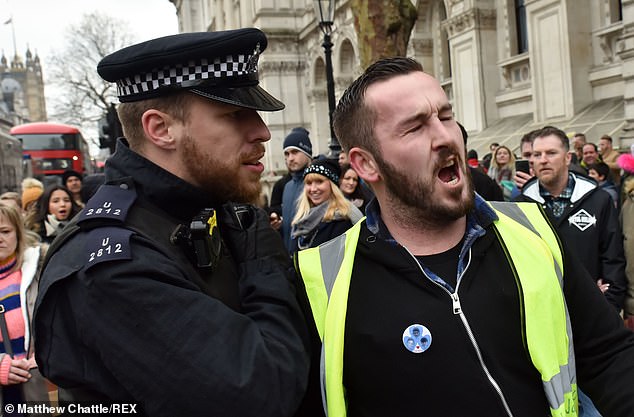 Around 100 far-right demonstrators stopped traffic and set off smoke bombs outside Downing Street as they marched through the capital during the far-right protest (pictured right, James Goddard)

The demonstration was one of several held across the UK as supporters called for a no-deal Brexit and declared the prime minister a ‘traitor’, the Telegraph reported.

Smoke bombs were set off outside Downing Street and around 100 protesters stood in front of cars to stop traffic on Westminster Bridge.

Demonstrators in hi-vis jackets then marched down Whitehall towards Trafalger Square before appearing to clash with police officers.

Traffic delays were also reported in the area as social media footage showed protesters sitting in the road.

One clip shows a young girl shouting ‘get off of me’ and screaming as police officers moved her as they attempted to control the march. 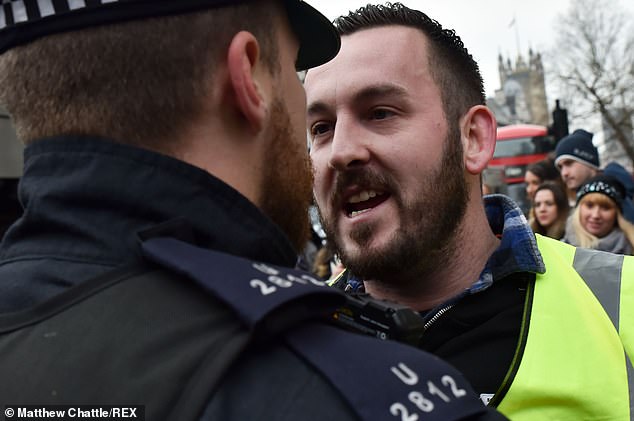 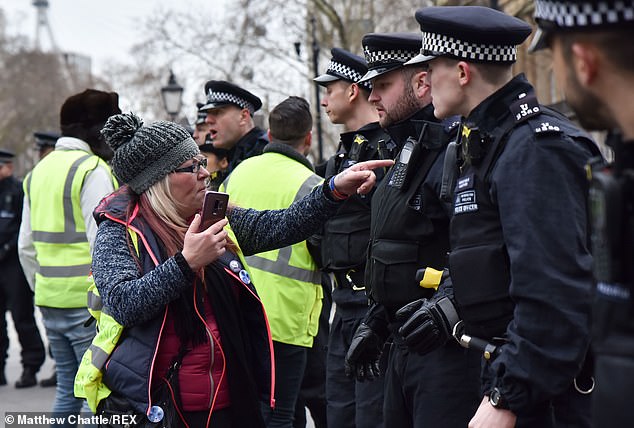 Moments later in the footage, three officers push a man against a bus and appear to detain him while ordering others to ‘stay back’.

James Goddard, who is believed to have organised the protest, was photographed approaching a police officer on Whitehall.

Far-right protests were also reported in Manchester, where demonstrators were pictured ‘blockading’ a Greggs bakery.

Mike Stuchbury wrote on Twitter: ‘The f***wits that like to call you a ‘snowflake’ are blockading a Gregg’s in Manchester for selling vegan sausage rolls. 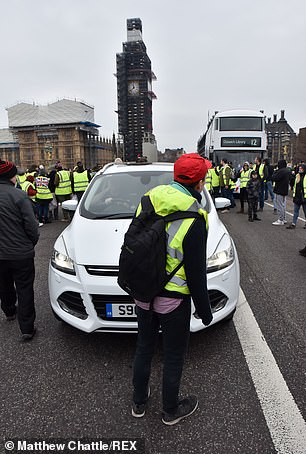 A spokesman for Metropolitan Police said: ‘Four arrests have been made following protests on Westminster Bridge, SW1 at approximately 11am today.

It comes after demonstrators took over three bridges in central London to demand Britain’s exit from the EU last month.

Campaigners chanted ‘Brexit now’ as they stopped cars from crossing Westminster Bridge, Tower Bridge and then Waterloo Bridge as Theresa May held crunch talks with EU leaders in Brussels.

About 60 people wearing yellow vests similar to those worn during protests in France gathered by the Houses of Parliament at noon to first occupy Westminster Bridge.

The protestors were eventually moved on by police after about 15 minutes before heading to Downing Street, where they chanted pro-Brexit songs before moving on to Tower Bridge.

While blocking the iconic bridge for about 20 minutes, campaigners were seen angrily remonstrating with motorists and bystanders. 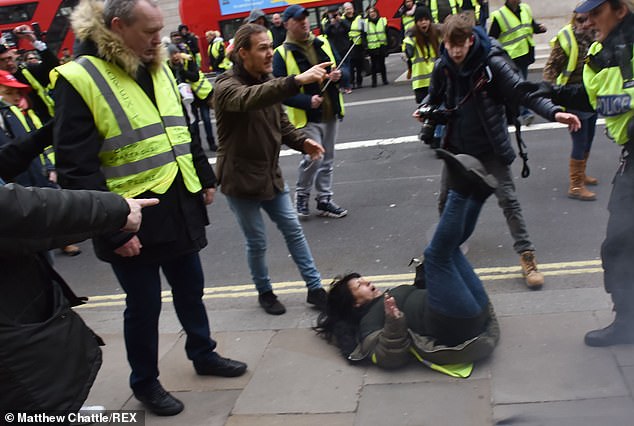 The group wore yellow jackets, reminiscent of the gilet jaune movement in France, in which demonstrators donning yellow vests have brought Paris to a standstill for the eighth weekend today.

Demonstrators in France today called for President Emmanuel Macron to resign for the eighth Saturday in a row.

Tear gas and batons were used by riot police on a so-called ‘Act VIII’ Day of Rage organised by the Yellow Vest movement. Marches were underway in several other cities across France.

It followed the arrest the 33-year-old Eric Drouet, one of the group’s most high-profile leaders, on Wednesday night. 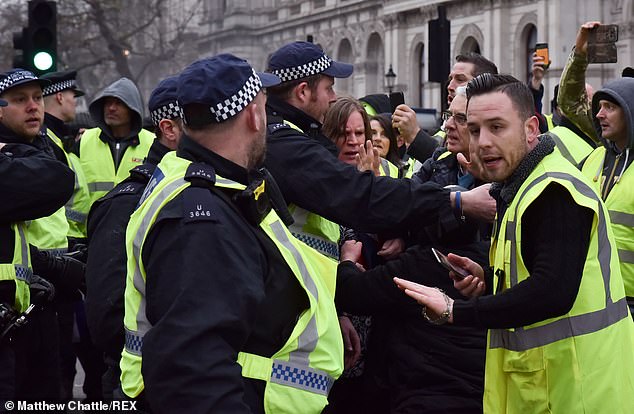 Today, there was trouble around the River Seine, where police unleashed gas and flash balls at a crowd of around 2000 Gilets Jaunes.

All were attempting to march on the National Assembly, the French parliament, but were held back.

This led to fighting on the foot bridges crossing the river.

Ten members of the movement have died at blockades organised at major roads around France, while hundreds of others have been injured in rioting.

The Vests have been protesting since November 17 and, despite a range of concessions by President Macron including scrapping green taxes of diesel and petrol, continue to call for him to step down.

NHS needs an army of volunteers to cope with the burden of the UK's rising elderly population
British ex-world judo champion Craig Fallon, 36, is found dead on East Shropshire hillside
PLATELL'S PEOPLE: What 'silver splicers' can teach us ALL about the joy of marriage
Category 5 Hurricane Willa threatens Mexico's Pacific...
Duchess of Sussex has handpicked the women she admires most for the cover of Vogue
Teen claims getting pregnant at 16 'saved her life' as it stopped her smoking weed and drinking
Michael Clarke Duncan's family accuses Omarosa of 'manipulating' him to change his will
Controversial radio broadcaster and Channel Nine sports presenter Ron Casey dies aged 89