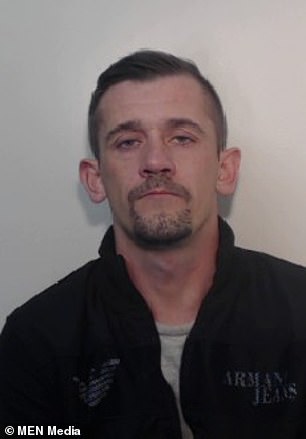 Christopher Gatley of Gorton Road, has been sentenced at Manchester Crown Square to 20 months in prison

A schoolgirl groomed by a man described as ‘vermin’ by police opened up about being abused after watching a Coronation Street storyline.

Christopher Gatley, 34, bombarded his victim with text messages, made a number of attempts to kiss her and inappropriately touched her in then summer of 2016.

The terrified youngster eventually found the courage to tell a teacher, friends and her mother after watching an abuse story line on Coronation Street and the BBC drama Three Girls.

Gatley, of Gorton Road, Reddish, was jailed for 20 months on Friday by Judge Suzanne Goddard QC, after pleading guilty to four counts of sexual activity with a child.

Manchester Crown Court heard that Gatley began taking an interest in the victim after meeting her.

Charlotte Crangle, prosecuting, described how Gatley managed to obtain the girl’s phone number, and would regularly send her text messages, including one asking what she would do if he tried to kiss her.

Gatley told the victim to delete the messages or it would be ‘game over’.

However, police were able to recover most of them.

The young victim has now spoken out to encourage  anyone being abused to come forward.

The schoolgirl said: ‘At first, I didn’t really realise what was happening.

‘I knew that it was wrong, but I didn’t know in which sense.

‘Every time I saw him I feared he would know if I told someone. I would just be intimated of what he would do.

‘I didn’t owe him anything, but at the time, I thought I did. I know now that I didn’t.

‘Everyone thinks – even me – I thought that if that ever happened to me, I’d tell someone or fight them off but it’s harder when it literally happens to you than what you would think.

‘He just made me feel intimidated and scared every single day.

‘Even now I walk around the streets fearing if I ever see him. I have nightmares all the time of the incident itself.

‘I try not think about it but every single day it’s with me. There’s no getting away from it.

‘I understand that everyone says it will get better. It probably will, but it will still be there forever.’

Ms Crangle told the court that the victim started to feel uncomfortable around the defendant, and tried to avoid being on her own with him as he would attempt to touch her bottom.

On one occasion he told her to come to his home, close her eyes and hold out her hands, and proceeded to kiss her.

On another occasion, when Gatley was visiting the girl’s house, he put his hand down the back of her jeans.

He also offered the victim money for a new coat and to get her nails done.

The crown argued that this was a part of a grooming process, and intended to make sure she stayed silent.

The youngster was too frightened to say anything to anyone about what was happening to her, but after seeing abuse storylines on television, she plucked up the courage to confide in a member of staff at her school.

She added: ‘It was Bethany Platt going through a similar situation but worse, and Three Girls about Rochdale.

‘It was just hard to watch but it gave me the confidence. I didn’t want the situation to get worse.’ 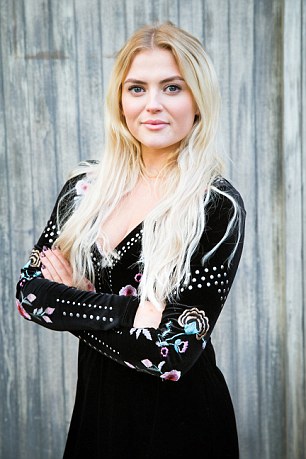 Coronation Street: Bethany Platt played by Lucy Fallon was groomed in a storyline on the show

The schoolgirl confided in her school’s safeguarding officer to begin with.

‘I wanted to tell my mum but I didn’t want to say it to my mum myself,’ she added. ‘I just knew that my mum would blame herself but no one was to know what was happening apart from me or him.

‘There was a bit of relief but I didn’t really know about the court system, or what was going to happen. When I found out it would take so long I did regret it a little bit, but I feel as if it will help myself and a lot of other people that I’ve done it.

‘I would encourage other people to speak out and to not blame themselves.

‘I feel there’s a stereotype on how people dress or what they look like, to say that they deserved it or asked for it, but I wear make-up and fake nails and I didn’t want anything of it.

‘I just feel like, even though they might not know it’s wrong, it’s not what should happen or what they deserve, but in the long run it will be better.

‘I’d tell victims to speak out and not be scared or intimidated.’

The victim’s heartbroken mother says she is still struggling to come to terms with what happened to her daughter, and has been plagued by guilt.

She said: ‘It was horrible. I felt like I should have known. I think about it every day.

‘We are always living in fear, we still do.

‘He could have admitted it and saved her the stress of years waiting for the evidence to come back and he only went guilty the week before.

‘I thought she’d have to re-live it and get interrogated, it wasn’t fair. It was on my mind every day.

‘It’s even affected me at work, I can’t function, I can’t concentrate, I was ready to give it up last week because I couldn’t do it.

‘I think now because it’s getting to the end it’s finally hit me.

‘She used to be an outgoing bubbly girl. She’s not anymore and she hasn’t been for ages.’

Sarah Haque for the defence told the court that Gatley had struggled with his mental health and had shown a willingness to explore the issues which led to his offending.

Detective Constable Mark Ledger of Greater Manchester Police, who investigated the case, described Gatley as ‘vermin’ and praised the victim and her family for reporting the crime, and the way they coped with the police investigation.

He said: ‘This is a classic example of grooming. He’s isolated her, bombarded her with messages and moved on to sexualisation.

‘It was just really the bravery of her to stop it when she did.

‘He’s a horrible person. I’d describe him as being vermin. That’s the way he’s gone around what he’s done. He doesn’t have a care about anyone else.

‘She didn’t know what was happening until she saw it on television. I’d just encourage people. Just have the bravery to speak out, to tell someone they trust.’

The girl’s mum added: ‘I’m very proud of my daughter for speaking out and I want to say thank you to GMP for all their support over the past two years, and to a teacher at the school.’