Exhibits including a military camera that can be mounted on a dog, the £2billion Tempest jet fighter and long range missiles that can strike targets more than 300km away have gone on display at the world’s largest arms fair.

The Defence and Security Equipment International fair opened today at the ExCel centre in east London and sees arms manufacturers market their wares to delegations from across the world.

A huge range of technologically advanced military hardware is available to view in the exhibit centre, which includes the very latest in rockets, tanks, jets, grenades and ammunition.

The event is supported by the Ministry of Defence and the Department for International Trade, which has a wing dedicated to arms exports.

British defence giant BAE Systems is listed as a ‘platinum partner’ alongside American firm General Dynamics, while the United Arab Emirates will have its own pavilion.

But the exhibition has sparked mass protests, as more than 200 activists from groups including Campaign Against Arms Trade blocked roads to the venue triggering confrontation with police.

Over the last week of protest, which is thought to have involved around 2,000 people, 113 people have been arrested for offences including aggravated trespass and obstruction of the highway.

It also emerged that Sadiq Khan has told organisers to move it out of London. In a letter seen by The Independent, he wrote: ‘London is a global city, which is home to individuals who have fled conflict and suffered as a consequence of arms and weapons like those exhibited at DSEI.

‘In order to represent Londoners’ interests, I will take any opportunity available to prevent this event from taking place at the Royal Docks in future years.’

In a response to Mr Khan’s letter, DSEI event director Grant Burgham said it ‘plays an important role in supporting the Ministry of Defence’s procurement needs, helping deliver British jobs and economic growth, and deepening the UK’s partnerships on a global stage’. 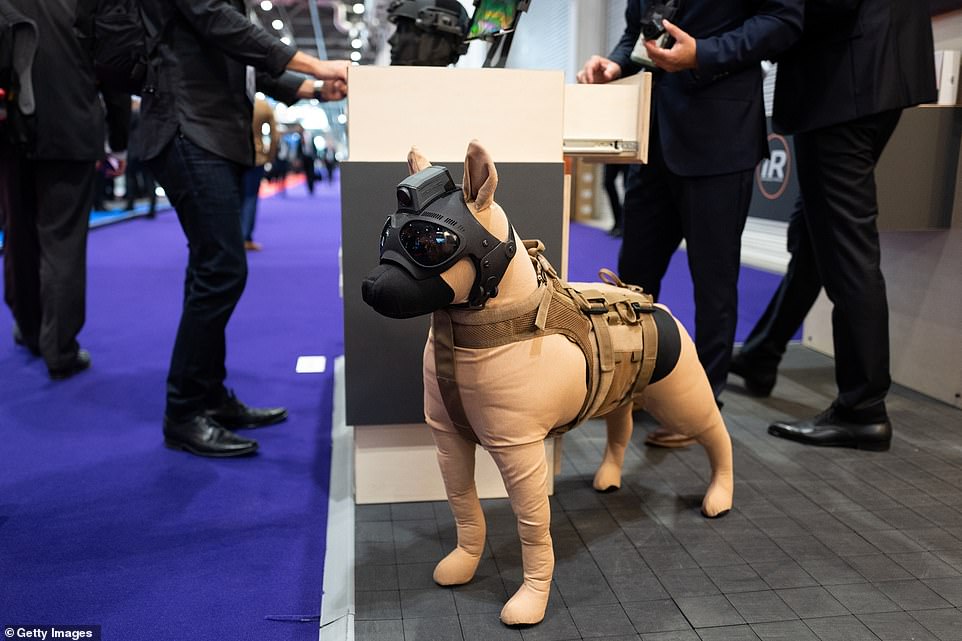 A model dog wears a protective K9 Helm mounted with a MOHOC camera system. The MOHOC camera are tactically-designed military helmet cameras, and its designers say it ‘revolutionizes form-factor, durability and user interface.’ Worn by soldiers, it is touted as the lowest profile helmet camera, which avoids getting snagged on cables or on the top of doorways. Special mounts mean it can also be worn on dogs. The aluminum and over molded rubber housing means it is dustproof and waterproof to 33 feet, and has an overall recording time of 2hrs and 45minutes. Prices start at $499 dollars. The helmet is priced at $600 dollars 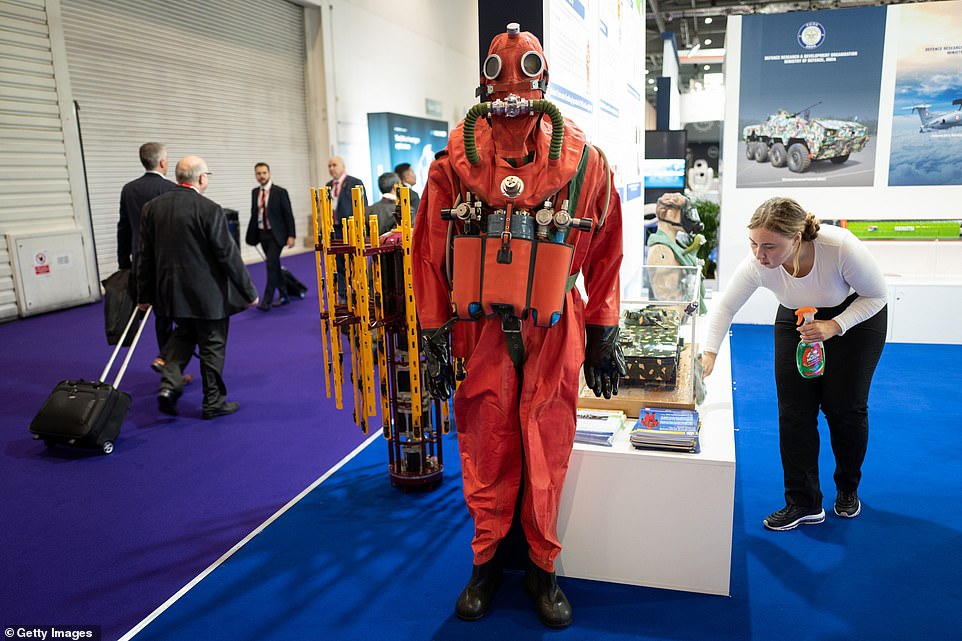 A submarine escape suit on display at the arms fair. The Submarine Escape Immersion equipment is a whole body suit and one man life raft. It allows submariners to escape from a sunken submarine. It also provides protection against hypothermia. The suit allows submariners to escape a vessel at depths of up to 600ft, with an ascent speeds of up to 2 to 3 meters a second. It is also fitted with equipment that allows the user to stay buoyancy on the surface. 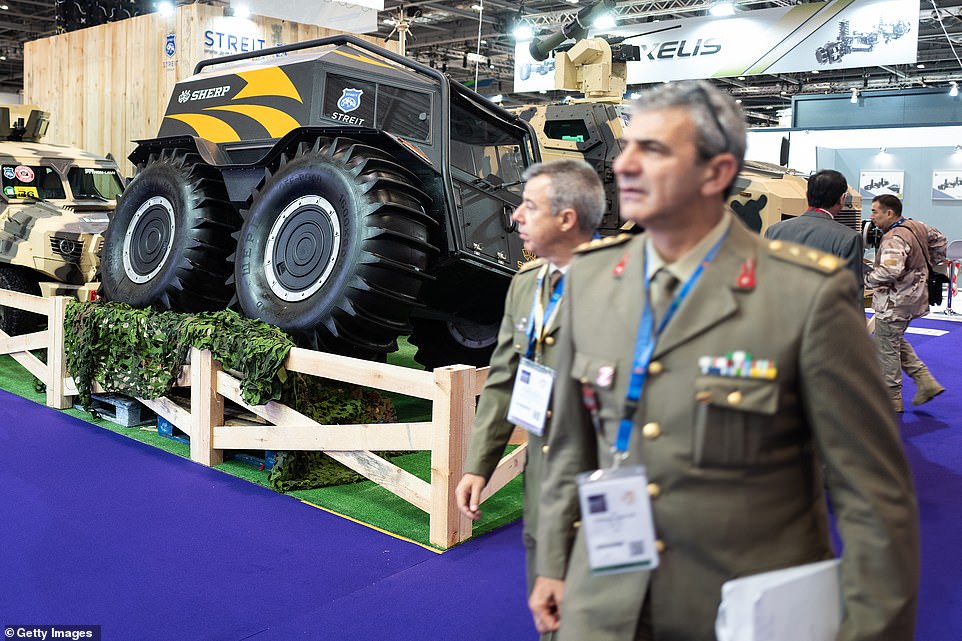 Military delegates walk past a display stand featuring the Streit Sherp all-terrain vehicle on day one of the DSEI arms fair at ExCel. The 4×4 SHERP vehicle, manufactured in Russia, has been designed to operate in all terrains, including swamps, ice, snow, rocky mountains, forests. It is able to climb out of water and onto ice, climb a step of one meter in height. Each wheel has a volume of 800 litres and it has a carrying capacity of 1000kg and is able to swim when fully loaded. Top speed is around 30mph on land and 3mph in water 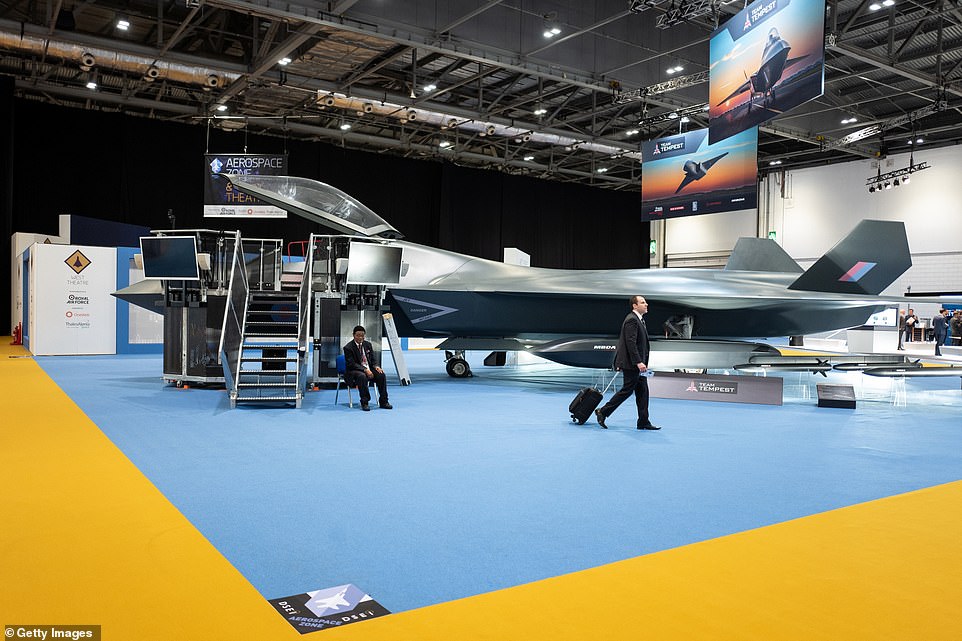 Also on display was the £2billion British made Tempest jet stealth fighter, which was first unveiled by the then Defence Secretary Gavin Williamson last year. It is able to fly either with a pilot or as a drone. The concept aircraft has been put together by British firms including BAE Systems, Leonardo, MBDA and Rolls-Royce, which have joined together with the RAF Rapid Capabilities Office to form ‘Team Tempest’ to pursue the opportunity.  Mr Williamson said: ‘Tempest is going to be a future jet fighter that will take the RAF to an ever greater height’ 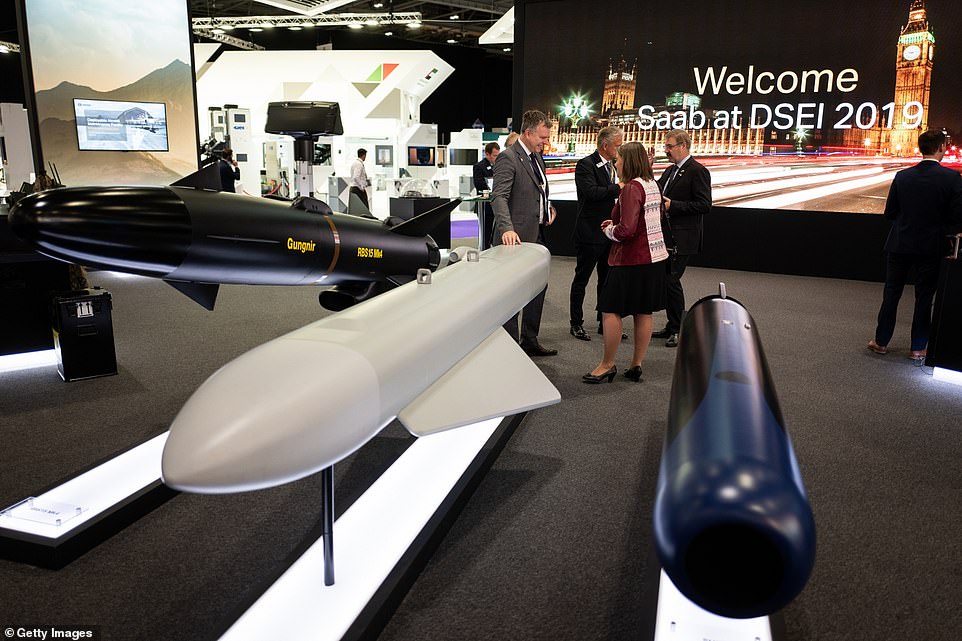 An RBS15 mk4 (left), AREXIS Jammerpod (centre) and an SLWT (right) are seen on the Saab display stand. The RBS mk 4 has a wingspan of 1.4metres (55 inches), is 4.35metres (14ft) long and carries a 200kg warhead. It has a range of 300km and travels at 0.9mach. The Jammerpod is asttached to fighter jets to disable radar systems and the Saab Lightweight Torpedo system (SLWT) has a weight of approximately 340 kg, a range of 20km and an endurance of around one hour 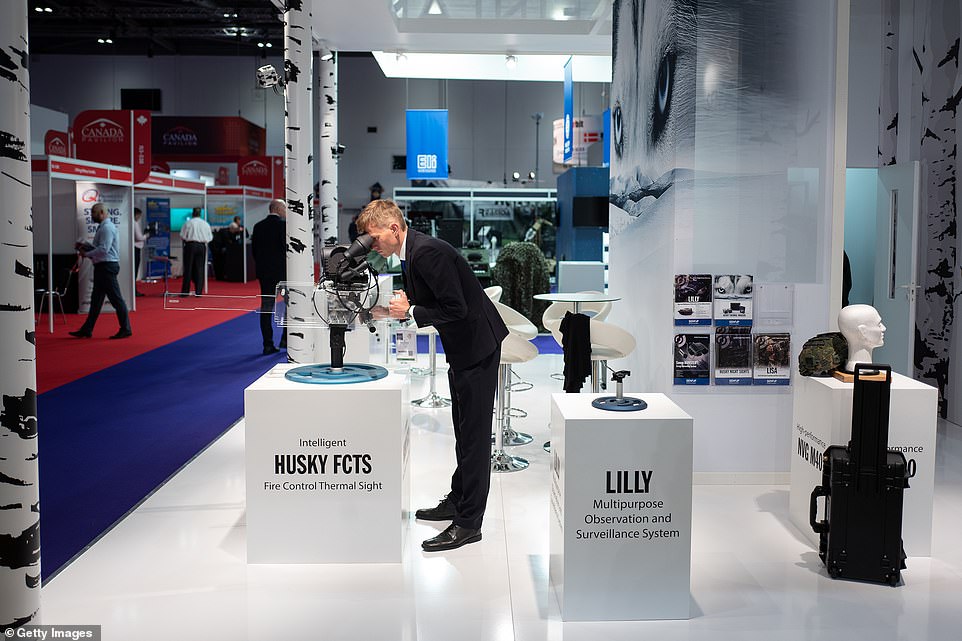 A man looks into a SENOP Husky Fire Control Thermal Sight. HUSKY Fire Control Thermal Sight, developed by Senop, is designed and manufactured in Finland. It is suitable for grenade machine guns and similar weapons and is said to considerably improve the accuracy of rounds. At a single press of a button, HUSKY sight takes a measurement of the target, drawing the aiming dot on the display that is rapidly calculated by using distance of the target, ammunition’s ballistic tables, measured terrain angle, temperature and wind 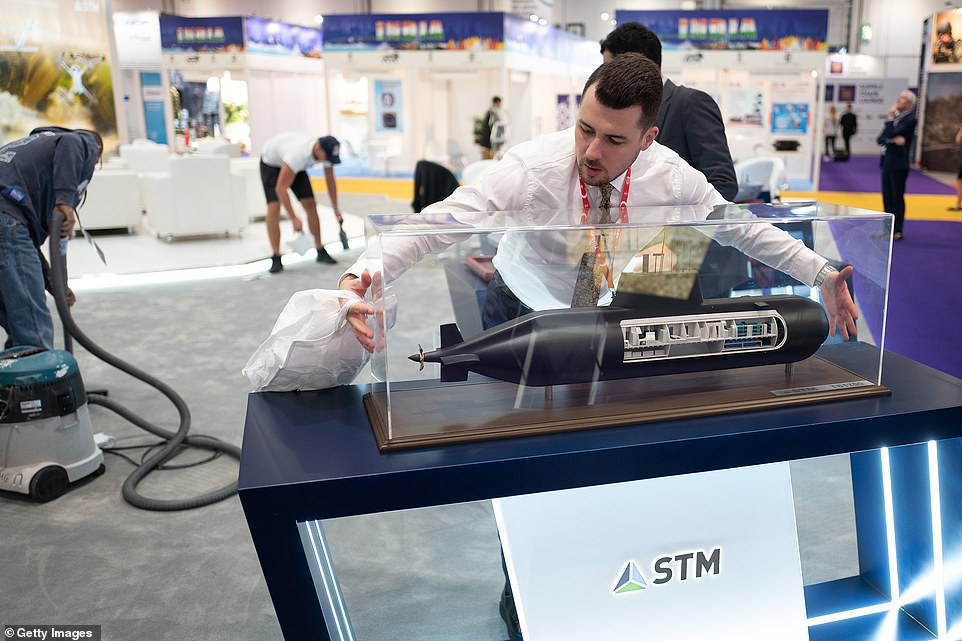 A man removes a protective cover from a model of the STM TS1700 submarine. The TS1700 has been designed by Turkish defence firm Savunma Teknolojileri Mühendislika. It has length of 60m and a diameter of 6.5 metres, (196ft) and can accommodate a crew of 25. The submarine has eight torpedo tubes for heavyweight torpedoes and anti-ship missiles. It is aiming for a diving depth of 300m (nearly 1,000ft) or more and a top speed of 20 knots. 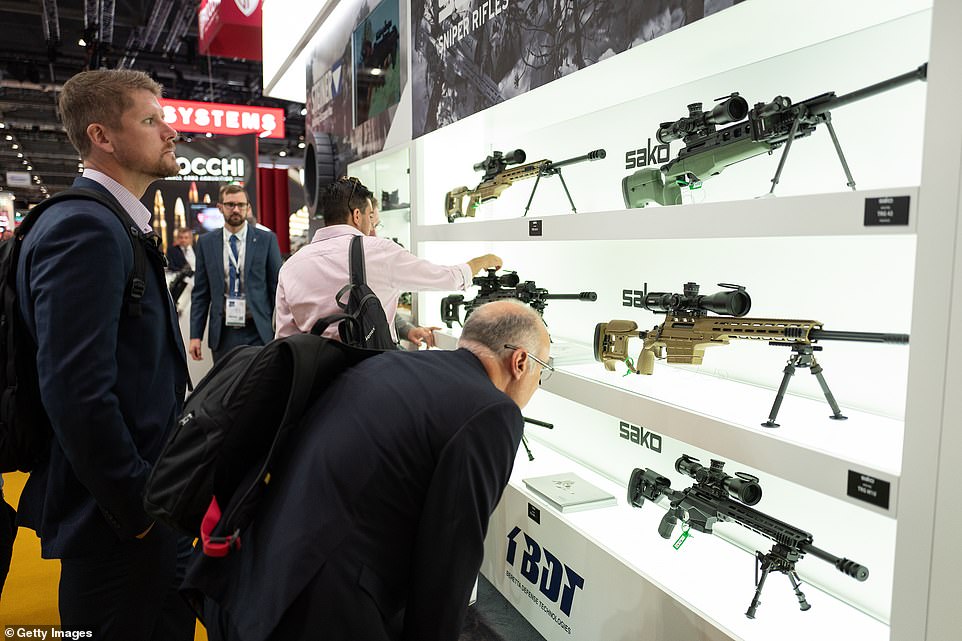 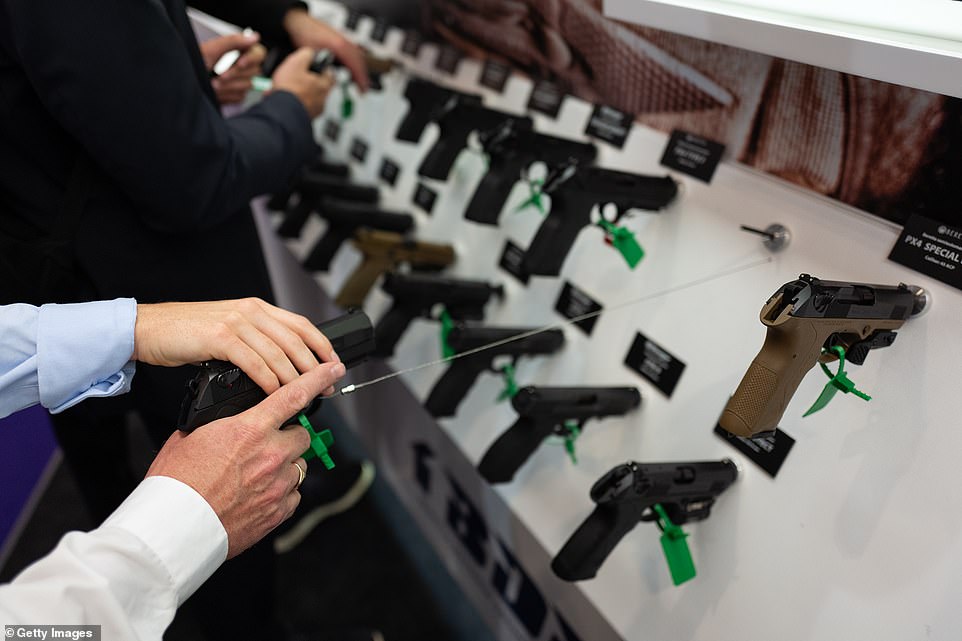 Handguns on display at the Beretta Defense Technologies (BDT) stand. They include the PX4 Storm, a semiautomatic pistol developed to meet the requirements issued by the US Special Forces Command

Seven-year-old's reaction when his prankster father creeps up behind him while he's running a bath
Driver being chased by police hits F18 fighter jet and dies at US airbase
Rory Stewart denies he has ever been a spy
Escape to the Chateau's Angel Strawbridge launches home furnishings range
Streatham terrorist Sudesh Amman's mother is 'disgusted' by rampage
Princess Diana 'would have thought Kate and Meghan truly were the daughters she never had'
Legal expert gives list of abusive relationship red flags
Tui customer claimed £20,000 for sickness but his Facebook snaps told a different story