THE CHASE viewers were left stunned when a contestant failed to correctly answer which bird the McVitie’s chocolate biscuit is named after.

After telling Bradley Walsh about meeting Victoria Beckham and Olivia Newton-John while travelling the world in the air, Andy put his knowledge to the test with the quickfire round.

Stumbling at the first hurdle, he was asked the question: “What McVitie’s chocolate biscuit is named after a flightless bird?”

Andy’s teammates could be seen holding in their laughter as he offered up the dodo as an answer.

Despite this blunder, Andy went on to land £5,000 when facing The Beast in the next round.

One put: “I think Andy lied about his age on his application for The Chase.”

Another joked: “Andy on The Chase is the same age as me – wtf happened to him? Just saying.” 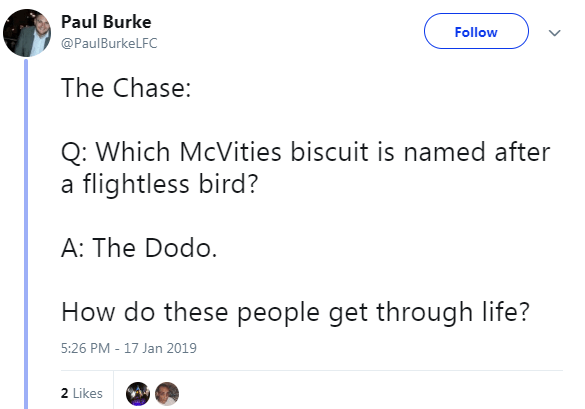 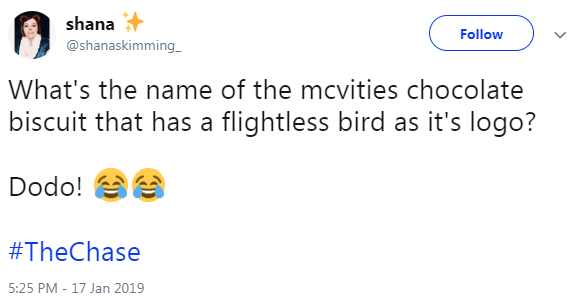 'WE'RE OVER THE MOON'

Even The Chase’s official Twitter account got in on the action, writing: “@McVities any chance of changing the name of Penguins to Dodos?”

Viewers also flocked to social media to mock Andy for his answer.

One put: “Love a chocolate Dodo!”

Another viewer asked: “How do these people get through life?”

A third teased: “Andy was already 49 when the Dodo went extinct!”

FANCY getting away from it all?

This means you could book a break at one of 333 holiday parks across the UK and abroad, for under a tenner!

All you need to do is collect TEN Sun Savers codes or TEN tokens or codewords printed in The Sun. This round is running between Saturday, January 5 and Tuesday, January 29.

If you’re collecting tokens or codewords use the booking form or book online at thesun.co.uk/holidays