Exactly 1,000 days ago today, the British electorate went in unprecedented numbers to the ballot box for the EU referendum.

And when 17.4 million voted Leave, on a 24-year-high turnout of 72 per cent, they gave the Government the biggest democratic mandate in UK history.

With a sense of quiet jubilation, courage, determination and ambition, the people said precisely what they wanted: To cast off the sclerotic bloc’s chains and step out into the world.

Defiantly ignoring the unseemly bombardment of ‘Project Fear’ scare stories from biblical prophets of doom, who warned economic catastrophe would befall Britain, the indomitable public sent a clear message to the politicians: Get us out! 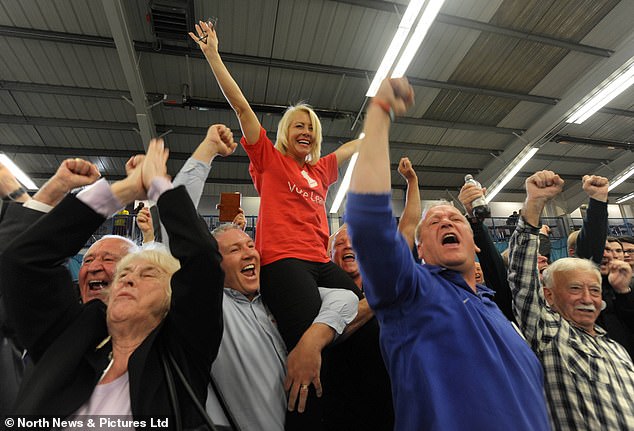 Wednesday marks 1,000 days since the Brexit referendum. Leave voters in Sunderland (pictured) were some of the first people to start celebrating

Despite being visibly stunned by the extraordinary — and unexpected — result, the party leaders agreed to implement the electorate’s will.

Soon, it was said, the country would finally become a truly sovereign nation for the first time in 45 years.

We could halt unpopular free movement, regain control of borders, ditch the loathed Common Agricultural and Fisheries Policies, end the European Court’s jurisdiction over British law and set sail on the high seas of global trade with flourishing economies. And, to boot, stop sending billions of pounds annually to the Brussels spendthrifts.

How long ago it now seems! Today the dream, if not dead, is gasping pitifully on life support. 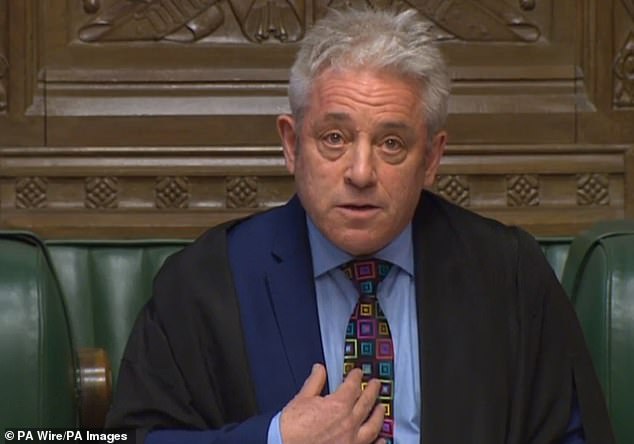 House of Commons Speaker John Bercow has been a staunch opponent of Brexit, despite the referendum result

The culprit? An out-of-touch, elitist Parliament which has shamefully failed to enact the explicit desire of the electorate.

As her deal floundered, no wonder Theresa May was forced to make the embarrassing admission that Britain was embroiled in a ‘national crisis’.

Let us be crystal clear: this is a humiliation for the United Kingdom. There are no two ways about: the failure to pass a deal in the 1,000 days since June 23, 2016, has made us an international laughing stock. 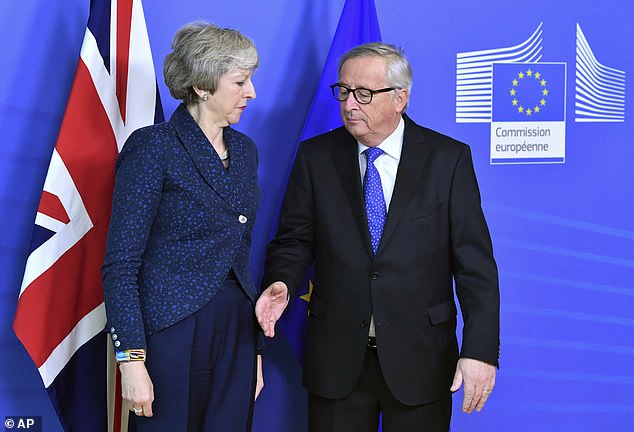 Rubbing salt into the wound, EU chief negotiator Michel Barnier has suggested watering down the Prime Minister’s withdrawal agreement to a deal so soft it would make an aghast public wonder why they had bothered to leave in the first place.

For millions of moderate, pragmatic people across the nation, the unsavoury events unfolding in Westminster must seem a monumental act of betrayal.

Out in the real world, where men and women have jobs, incomes and mortgages that rely on a stable government, the tawdry antics can have been nothing short of bewildering. All they wanted was a sensible resolution. They must feel foolish for putting so much faith in politicians! 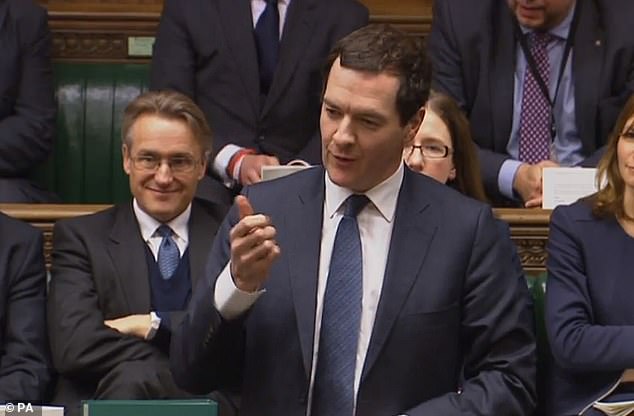 The British economy continues to yield healthy growth since the Brexit referendum, despite warnings from former Chancellor George Osborne

While the incessant squabbling of MPs has brought Government to a standstill, those self-same hardtoiling folk have been getting on with the task of keeping the country going.

And an excellent job they are doing. Figures yesterday show the jobs miracle continuing apace. Employment is at a record high (32.7 million in work) while unemployment has fallen below four per cent for the first time since 1975 — when the UK was on the brink of becoming an economic basket case.

Meanwhile, real wages saw their biggest increase since the 2008 crash. These are numbers the stagnating eurozone can only dream of.

So it is no wonder heads of companies are tearing their hair out — along with the rest of a frustrated, irritated nation — at Parliament’s abject failure to get a deal over the line. 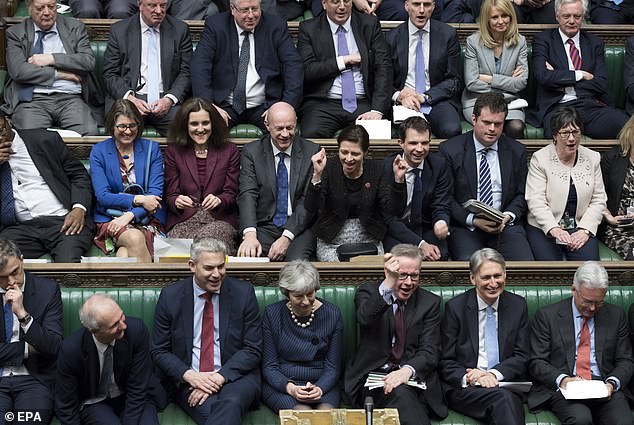 The International Monetary Fund recently said that if agreement was reached, the resulting economic surge would see UK growth quickly outpace even that of Germany. The prize for delivering Brexit is enormous.

And by their towering incompetence, the preening egotists in Westminster — seemingly more interested in political posturing and clucking about arcane Parliamentary procedure than what is good for the nation — have also jeopardised a £26.6 billion ‘Brexit bonus’.

Raked in by Chancellor Philip Hammond to spend after all EU liabilities had been paid, it was cash that could have been spent on police battling the knife-crime epidemic, our creaking railways, under-strain care system, schools and tax cuts. But now that is at risk of being squandered.

Even Donald Trump’s top adviser, John Bolton, yesterday announced that the U.S. was ready to sign a mammoth trade deal with the UK after Brexit. Talk about killing the goose that laid the golden egg! 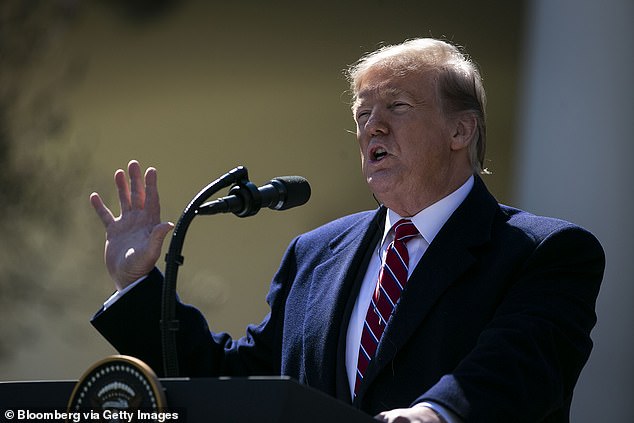 How on earth has it come to this?

The Mail is the first to admit Mrs May’s Brexit deal is not flawless. There are obvious concerns that Britain could be temporarily stuck in the Irish backstop and governed by EU rules — hampering our chance to sign agreements with economies in the rest of the world.

But there are overwhelming positives. It was a sensible deal that stood the best chance of repairing a nation fractured by Brexit, honoured the referendum result and ensures that our departure will be orderly and amicable

There is no single plan which commands a majority. The British people do not want their desire for independence from the EU stymied by a second referendum, or a Norway-style deal that would leave this country shackled to the bloc without voting rights. But neither do they want a chaotic No Deal. 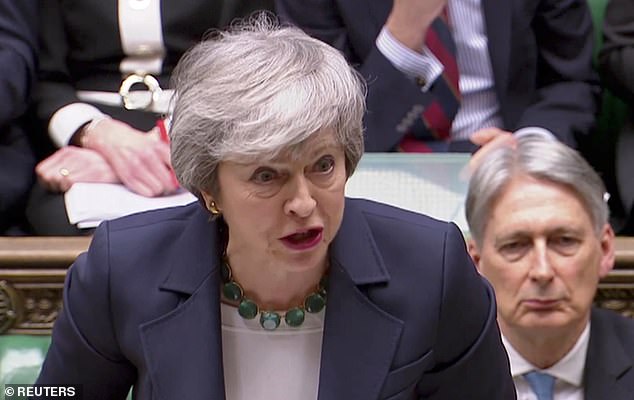 The Prime Minister’s fate for tirelessly and resolutely thrashing out a conciliatory pact? Carping, mockery and duplicity, from MPs on all sides of the political spectrum in Westminster, and sneering from Brussels.

Few come out of the whole sorry debacle with a smidgen of credit — except for the Prime Minister, the only grown-up in the room.

Predictably, even as she battled to salvage her ailing deal yesterday, there was a beauty parade of ambitious Tory ministers keen to peacock their leadership credentials, instead of rallying behind the Prime Minister — whatever their reservations about the deal.

And on an extraordinary day, Boris Johnson, who quit the Cabinet in a fit of pique over her negotiating strategy, was spotted entering No 10 — presumably demanding his price for his (eventual) support. 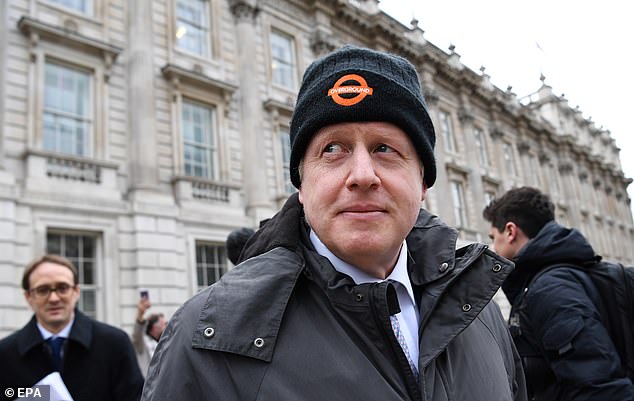 Boris Johnson visited Theresa May on Tuesday, presumably demanding a price for his support

Meanwhile, despite a lifelong hatred of the EU, Jeremy Corbyn’s stand on Brexit was one of ambiguous evasion. The Labour leader insinuated he supports a second referendum and that, if he did, he might back Remain . . . or not . . .entirely depending on who he was talking to.

This preposterous Marxist’s only desire is to force a General Election. Yet if he seized the keys to No 10, his hard-Left clique would drive the economy into a ditch. That would be a national calamity.

But the most deplorable of all the subversives are the Jacob Rees-Mogg-led European Research Group — the Hard Brexiteers’ trade union. They have insisted on the purist of pure Brexits.

But the supreme irony is that, by hubristically making the perfect the enemy of the good, they risk losing the prize they have sought for two generations: Brexit itself. 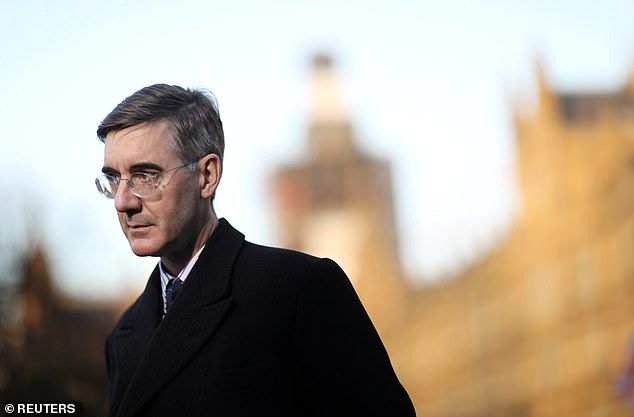 It is difficult to envisage how the hardliners will be able to look each other in the face if Britain is forced to stay in the EU, let alone deal with the anger of millions of voters.

Now Mrs May will write to Brussels requesting an extension, although it is not clear what Mr Barnier, European Commission president Jean-Claude Juncker et al will offer. Whatever it is, it will undoubtedly come attached with painful conditions.

But if the Prime Minister manages to wangle a third vote on her deal, Brexiteers must decide what they really want: swallowing leaving the EU on her terms, seeing it diluted or consigned to the dustbin of history.

How did victory turn to this?

Teen who stabbed Yousef Makki locked up for 16 months for lying to police
Keira Knightley wows in a glittering metallic top and maroon trousers at BAFTA screening of Colette
Police spent £18,000 and sent 100 officers to stand off with one man who was mooning them
Mother, 23, facing jail after her baby daughter 'drowned in the bath as she checked Facebook'
'I LOVE Tiffany!' Donald Trump says it is 'absolutely false' that he called his daughter OVERWEIGHT
Man in his 40s ‘is hacked to death in a machete attack’ on northwest London street
Good news for the baby of the family... you'll live longer!
Michael Grade says ITV 'will probably lose a very popular show' after Jeremy Kyle crisis