Professor Anthony Harnden, the deputy chairman of the Joint Committee on Vaccination and Immunisation (JCVI), said preliminary research suggested the first dose of the vaccine is helping to protect young adults and over-80s.

He added that the data, which is set to be published in the next few days, also indicates Britons may benefit in the long-term from a delayed second dose.

The research is mostly based on the Pfizer/BioNTech jab and represents around three to four weeks of the vaccination programme.

A total of 445,941 Covid vaccines were administered on Thursday, official figures show, of which 443,985 were given to people receiving their first dose.

The NHS data shows that 344,464 vaccinations were administered across England on January 28 and the total number of people vaccinated rose to 7,891,184. 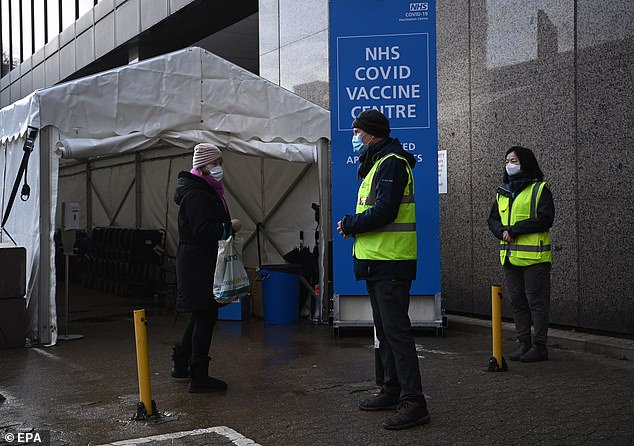 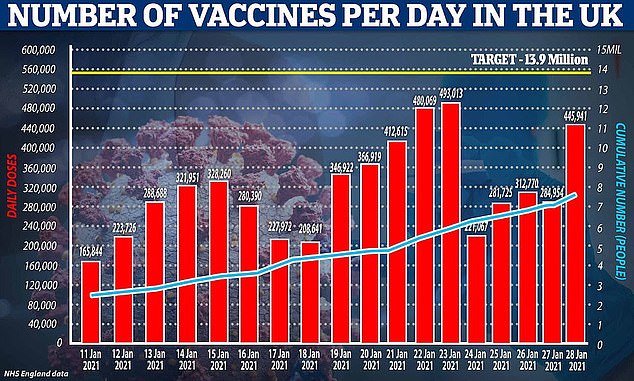 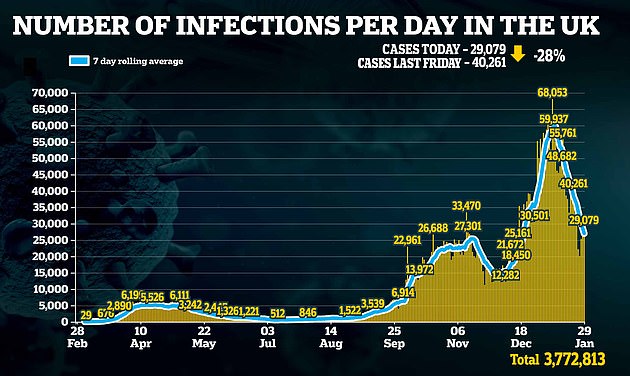 Professor Harnden told The Times: ‘The preliminary data indicate a vaccine effect from the first dose in both younger adults and in older adults over 80. The effect seems to increase over time.

‘It is possible that we may get stronger and better long-term protection by a delayed second dose.’

He also said that, in exceptional circumstances, people may be able to receive a jab from a different manufacturer for their second dose.

Professor Harden added: ‘There aren’t results from studies on mixing vaccines at the moment, so we haven’t got evidence but there’s no theoretical evidence why you shouldn’t mix vaccines.’

The vaccine, developed by the Johnson & Johnson-owned pharmaceutical firm, is 66 per cent effective overall at preventing moderate to severe coronavirus 28 days after vaccination, trial results show.

Novavax announced late on Thursday that its jab was 89 per cent effective following a clinical trial run in the UK.

The results came as yesterday marked the anniversary of the first known death involving Covid-19 in the UK, that of 84-year-old Peter Attwood, from Chatham in Kent. 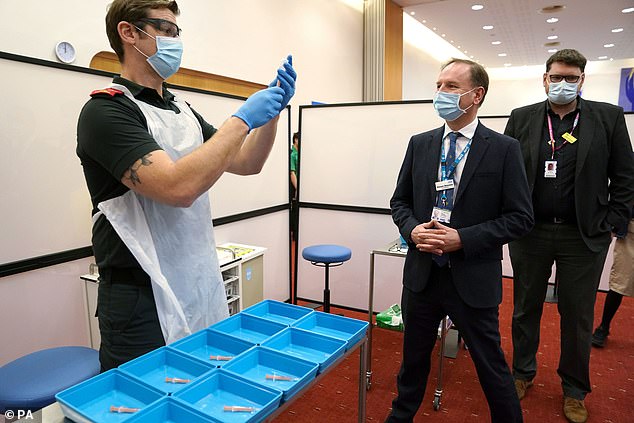 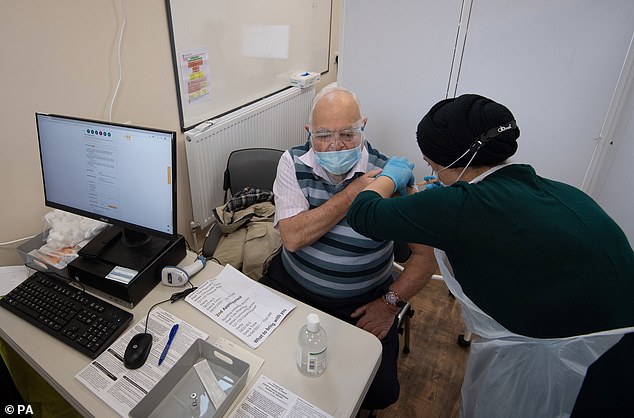 One year on, the Government on Friday said the death total now stands at 104,371 after reporting a further 1,245 people had died within 28 days of testing positive for Covid-19.

Separate figures published by the UK’s statistics agencies for deaths where Covid-19 has been mentioned on the death certificate, together with additional data on deaths that have occurred in recent days, show there have now been 121,000 deaths involving Covid-19 in the UK.

Experts say the latest vaccine data is another positive sign, with three jabs already approved for use in the UK – Pfizer/BioNTech, Moderna and Oxford/AstraZeneca.

Professor Kevin Marsh, co-lead of the Covid-19 team at the African Academy of Sciences, and Professor of Tropical Medicine at the University of Oxford, said the results from the Janssen jab trials were ‘extremely encouraging’.

He said: ‘It is possible that some people will look at the overall reported efficacy of 66 per cent in preventing moderate to severe Covid-19 and focus on comparisons with potentially higher ‘top line’ efficacy reported for some other vaccines.

‘This would be a mistake. The real headline result is that a single-shot vaccine, capable of easy long-term storage and administration, provided complete protection against hospitalisation and death.’ 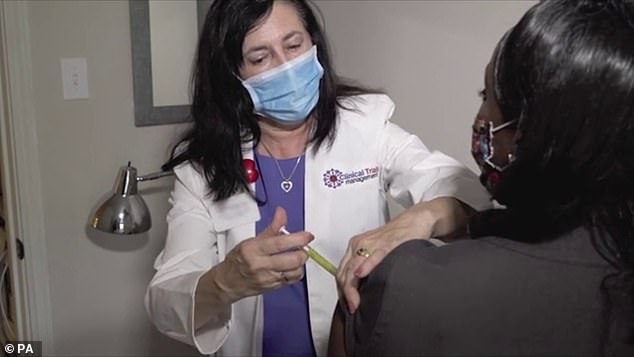 Late-stage trials of the Janssen coronavirus vaccine, taken from a still of an undated video issued by Johnson and Johnson

The UK has ordered 30million doses of the vaccine, with the option of 22million more, with deliveries expected in the second half of this year if the jab is approved by the Medicines and Healthcare products Regulatory Agency (MHRA).

Some 60million doses of the Novavax jab, to be produced on Teesside, have also been secured, with the hope that the MHRA could approve it within weeks.

Janssen is continuing trials into two doses of its vaccine to see whether this produces an even higher efficacy.

Health Secretary Matt Hancock tweeted: ‘This is yet more good news from Janssen on vaccines.

‘If this jab is approved this could significantly bolster our vaccination programme, especially as a single-dose vaccine.’

Johnson & Johnson plans to file for regulatory approval in the US next week, followed shortly by applying for approval in Europe and the UK.

However, the latest Government figures suggest the growth rate, which estimates how quickly the number of infections is changing day by day, is between -5 per cent and zero for the UK as a whole.

It means the number of new infections in the UK is broadly flat or shrinking by up to 5 per cent every day.

The Scientific Advisory Group for Emergencies (Sage) said the estimates are based on the latest data, available up to January 25, including hospital admissions and deaths as well as symptomatic testing and prevalence studies.

But it warned that cases ‘continue to be dangerously high and the public must remain vigilant to keep this virus under control, to protect the NHS and save lives’.

Based on recent figures, an average of 418,166 first doses of vaccine would be needed each day in order to meet the Government’s target of 15million first doses by February 15. 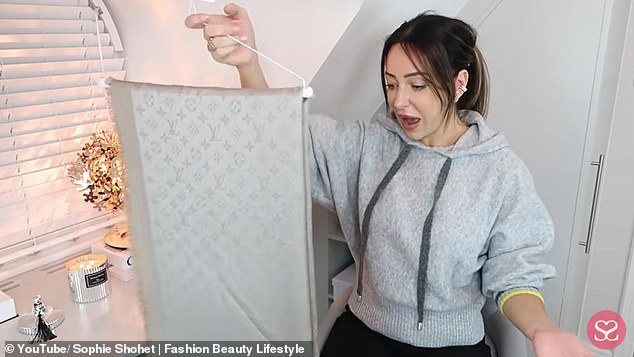 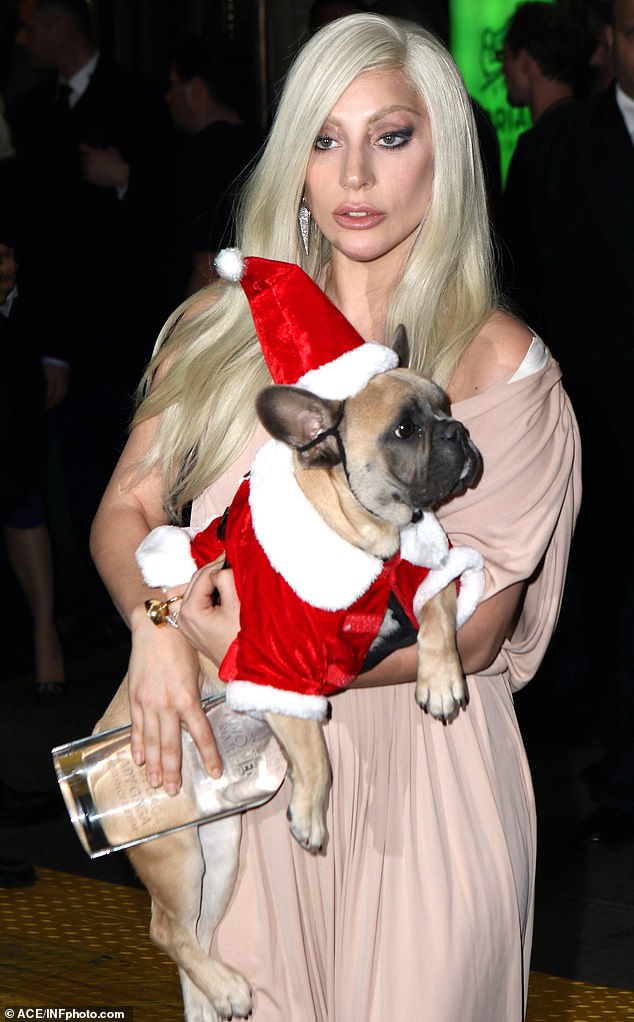 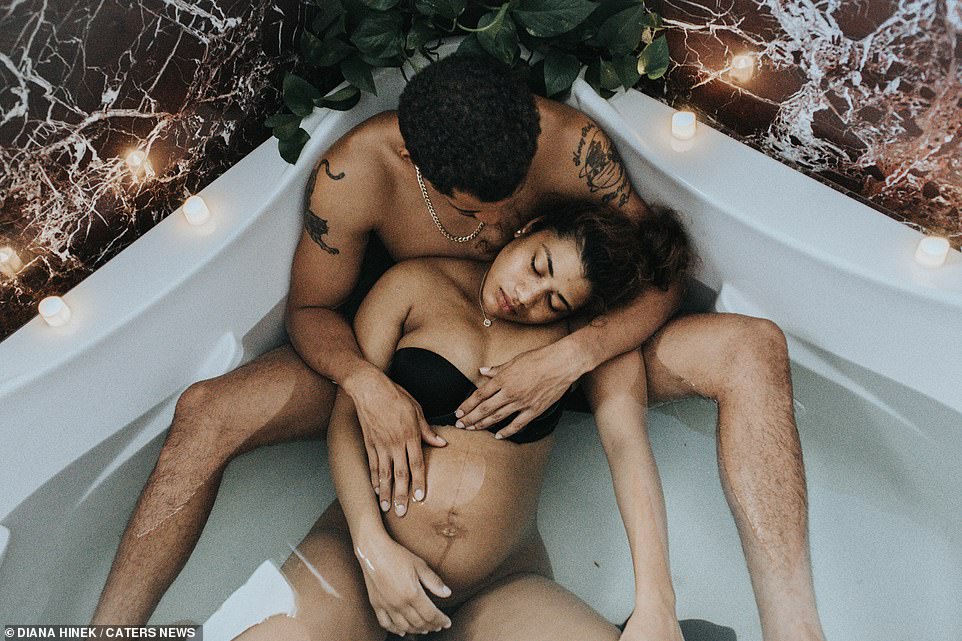