STOCKHOLM (AP) – The Latest on the awarding of the Nobel Prizes (all times local):

Immunologist Tasuku Honjo of Japan, co-winner of the 2018 Nobel Prize in medicine, says began his research after a medical school classmate died from stomach cancer less than two years after it was discovered.

The 76-year-old, speaking Monday at Kyoto University in Japan after the Nobel was announced in Stockholm, says his biggest reward now is to hear from cancer patients who have regained their health after being treated.

Honjo, an avid golf player, said a member of a golf club once walked up to him suddenly, thanking him for the discovery that treated his lung cancer.

Honjo says “He told me, ‘Thanks to you I can play golf again.’ …That was a blissful moment. A comment like that makes me happier than any prize.” 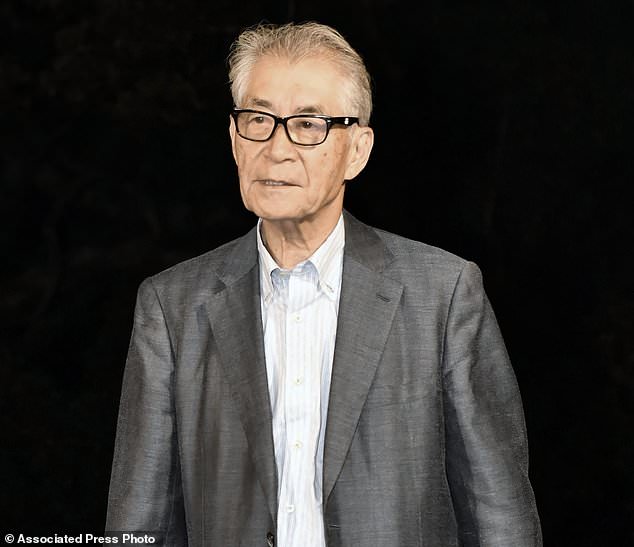 Tasuku Honjo of Kyoto University heads to the venue for a press conference in Kyoto, western Japan Monday, Oct. 1, 2018. The Nobel Prize in medicine was awarded Monday to Honjo and James Allison of the University of Texas Austin. (Ren Onuma/Kyodo News via AP)

Abe called into a news conference that Honjo was speaking at on Monday after the immunologist won the 2018 medicine prize.

Japan’s leader said over a speaker phone that Honjo’s research had given many patients hope. Abe added that as a Japanese, he feels proud. He encouraged the 76-year-old Kyoto University researcher to keep up the good work.

Honjo and James Allison of the University of Texas were jointly awarded the 2018 Nobel Prize in medicine.

The research honored with today’s Nobel Prize in Medicine paid off for at least one very famous patient: former U.S. president Jimmy Carter.

He was diagnosed in 2015 with the skin cancer melanoma, which had spread to his brain. He was treated with a drug inspired by the research of new Nobel laureate Tasuku Honjo, and announced in 2016 that he no longer needed treatment.

Nobel Prize winner Tasuku Honjo of Japan says what makes him most delighted is when he hears from patients who have recovered from serious illness because of his research.

The immunologist said Monday at a news conference at Kyoto University that he is honored and delighted by the award. He and James Allison of the University of Texas were jointly awarded the 2018 Nobel Prize in medicine.

Honjo, 76, said he wants to continue his research to save more cancer patients. He thanked the colleagues, students and family who have supported him in his research for such a long time.

American Dr. James Allison says he’s “honored and humbled” to receive this year’s Nobel Prize in Medicine, for his discovery of how to release a protein that works as a brake on the human immune system, unleashing immune cells to attack tumors.

Allison says he didn’t set out to study cancer, but to better “understand the biology of T cells, these incredible cells that travel our bodies and work to protect us.”

That research has led to a treatment known as “immune checkpoint blockade,” and Allison says he’s been able to meet cancer survivors who are living proof of its power.

Allison takes care in his statement from the M.D. Anderson Cancer Center in Houston to give credit to “a succession of graduate students, postdoctoral fellows and colleagues at MD Anderson, the University of California, Berkeley, and Memorial Sloan Kettering Cancer Center” who joined in the research.

Allison receives the prize jointly with Tasuku Honjo, 76, of Japan.

The two winners of this year’s Nobel Prize in Medicine or Physiology made discoveries that “constitute a landmark in our fight against cancer,” according to a statement from the Nobel Assembly of the Karolinska Institute that awarded the prize.

James Allison of the University of Texas and Tasuku Honjo of Japan’s Kyoto University did parallel work to stimulate the body’s immune system’s ability to attack tumors.

Allison studied a protein that acts as a brake on the immune system and the potential of releasing that brake.

Honjo separately discovered a new protein on immune cells and eventually found that it also acts as a brake.

“Therapies based on his discovery proved to be strikingly effective in the fight against cancer,” the assembly said in a statement.

Releasing the potential of immune cells to attack cancers joins other treatments including surgery, radiation and drugs.

The citation for this year’s Nobel Prize in Medicine says the two honorees developed therapies for treating cancer.

American James Allison studied a protein that functions as a brake on the immune system.

He realized the potential of releasing the brake and unleashing immune cells to attack tumors. He developed this concept into a new approach for treating patients.

Tasuku Honjo of Japan “discovered a protein on immune cells and revealed that it also operates as a brake, but with a different mechanism of action. Therapies based on his discovery proved to be strikingly effective in the fight against cancer.”

The Nobel Prize in Medicine has been jointly awarded to James Allison of the University of Texas and Tasuku Honjo of Japan’s Kyoto University for discovering a form of cancer therapy.

The 9 million-kronor ($1.01 million) prize was announced Monday by the Nobel Assembly of Sweden’s Karolinska Institute.

This year’s Nobel Prize recipients will be revealed starting Monday with the prize for medicine or physiology.

The Nobel Assembly of the Karolinska Institute – 50 professors at the Stockholm facility – chooses the winner or winners of the prize honoring research into the microscopic mechanisms of life and ways to fend off invaders that cut it short. A maximum of three laureates are selected.

Last year’s prize went to three Americans for work in identifying genes and proteins that work in the body’s biological clock, which affects functions such as sleep patterns, blood pressure and eating habits.

The physics prize is to be announced Tuesday, followed by chemistry. The winner of the Nobel Peace Prize will be named Friday. No literature prize is being given this year. 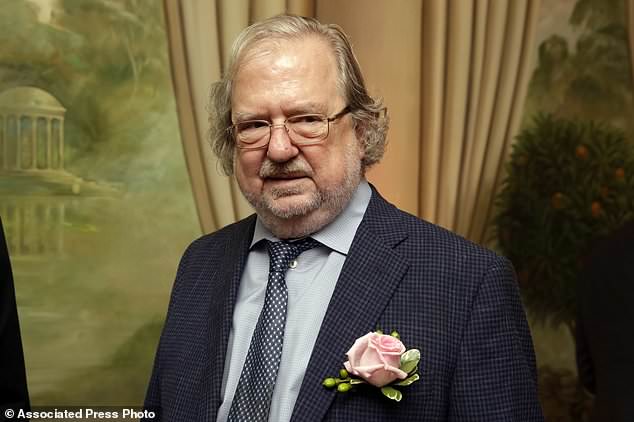 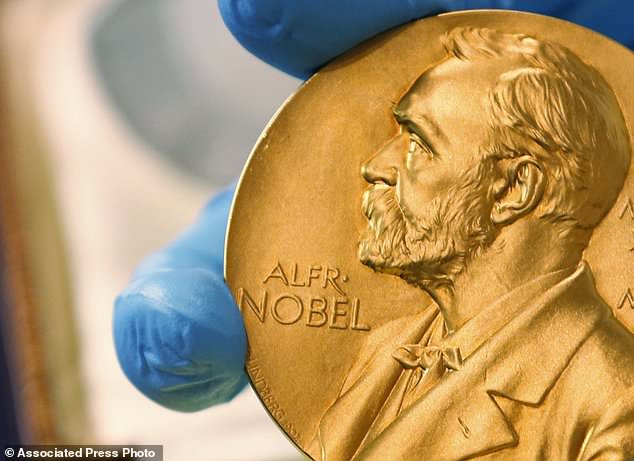 FILE- In this April 17, 2015, file photo a national library employee shows the gold Nobel Prize medal awarded to the late novelist Gabriel Garcia Marquez, in Bogota, Colombia. This year’s round of Nobel Prizes begins Monday, Oct. 1, 2018, with the award for medicine or physiology, honoring research into the microscopic mechanisms of life and ways to fend off the invaders who cut it short. (AP Photo/Fernando Vergara, File)

Orlando Bloom tenderly leans in and whispers to Katy Perry at the Monte Carlo Gala
How wives remember much more about their wedding than husbands
Two of TikTok's biggest stars, aged 19 and 20, are arrested on drugs charges in Texas
Strictly Come Dancing: Shirley Ballas beams as she joins quarter finalists for Musicals Weeks
Saudi crown price Mohammed Bin Salman denies reports of £3.8bn Manchester United takeover bid
Convicted robber, 18, who murdered a man in his 50s during an S&M sex game is jailed for life
Woman, 52, who chased her ex-partner with a five-inch knife is spared jail
Tania Mallet dies at 77: James Bond bosses mourn the loss of beloved Goldfinger actress