The US President praised the 93-year-old monarch after his trip to London as he held a press conference with French President Emmanuel Macron in Caen this afternoon.

Speaking after a ceremony at Normandy American Cemetery marking the 75th anniversary of D-Day, Mr Trump said it was ‘very interesting’ talking to the Queen. 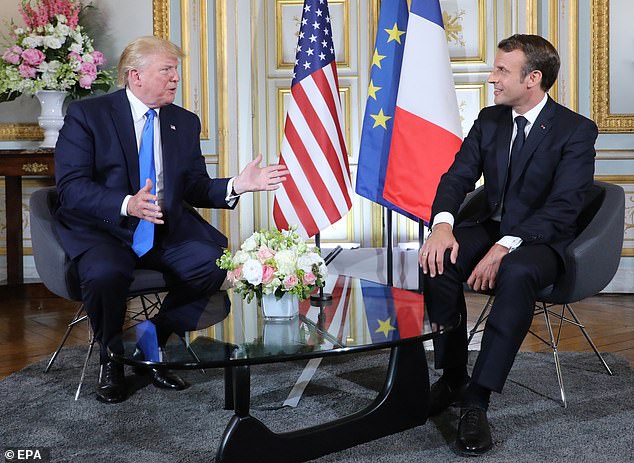 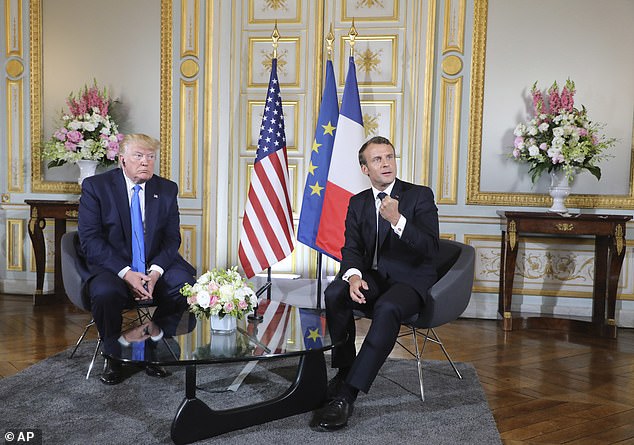 He said: ‘I found it to be a very amazing period of time, especially having spent so much time with the Queen, who I think is an incredible lady.

‘There’s a lot of question marks as to who’s going to be leading (the Tories) so it was very interesting talking to her and being with her for so many hours actually.

‘I feel I know her so well and she certainly knows me very well right now, but we have a very good relationship also with the United Kingdom.’

Mr Trump was expected to have discussed security, the fight against terrorism, instability in the Middle East, trade and Iran while meeting Mr Macron today. 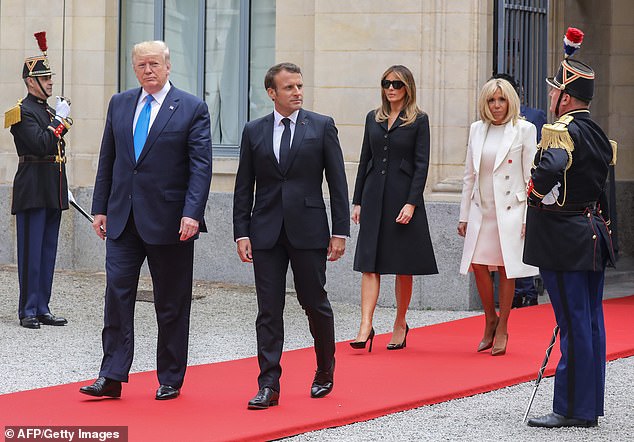 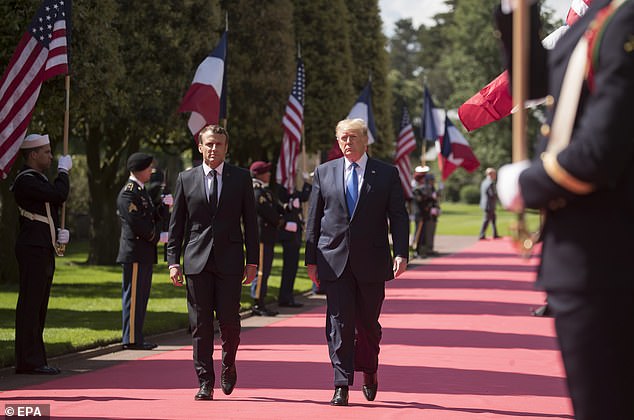 Mr Trump was expected to have discussed security, the fight against terrorism, instability in the Middle East, trade and Iran while meeting Mr Macron for talks in Caen today

‘It doesn’t seem to be working out, but at some point something will happen one way or the other, it will all work out. I’m interested to find out how it happens also.

‘So I think before you can think in terms of Brexit for the next few weeks, you’re going to have to find out what happens, who is going to be the new leader, and that’s a very interesting situation taking place.’

Speaking about his relationship with Mr Macron, Mr Trump also said: ‘Right now it’s outstanding. The relationship we’ve had together has been terrific.’

‘We’ve had great success working together too,’ Mr Trump said, referring to joint US and French military actions against the Islamic State group in Syria and Iraq. 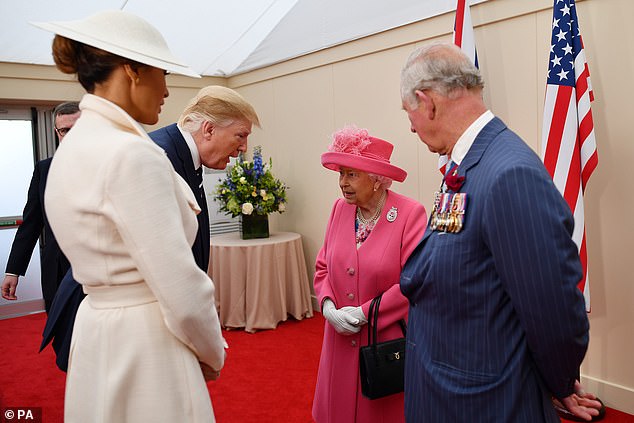 As Mr and Mrs Trump parted ways with the Queen and Princes Charles following the service in Portsmouth yesterday, he told her: ‘It was a great honour to be with you’ 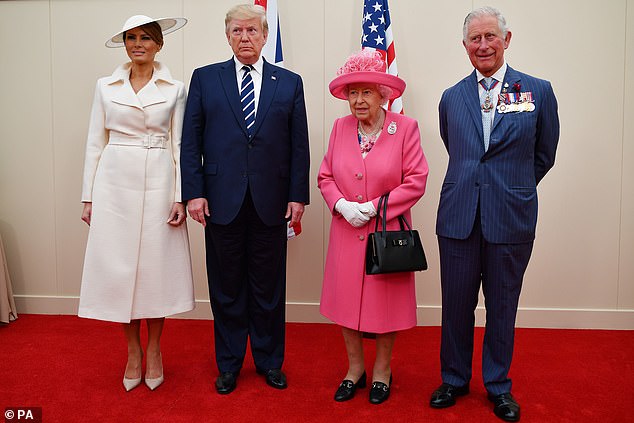 The Trumps, the Queen and Charles prepare to meet veterans in Portsmouth on Wednesday

The President added: ‘Your military is excellent. My people report back, they say it’s absolutely excellent. They work very well together.’

The two leaders have a big list of policy disagreements, from Iran to climate change to trade, and Mr Macron has criticised Mr Trump’s ‘American First’ nationalism.

They appeared friendly today, although the body language was cooler than during their first meetings, particularly when Trump was the guest of honour at France’s Bastille Day national celebrations on July 14, 2017.

The last time Macron hosted Trump in France – for the First World War centenary in November last year – it turned into a diplomatic fiasco.

Mr Trump arrived angry about Macron’s support for a European army and he mocked the French leader on Twitter shortly afterwards over his ‘very low approval ratings’. 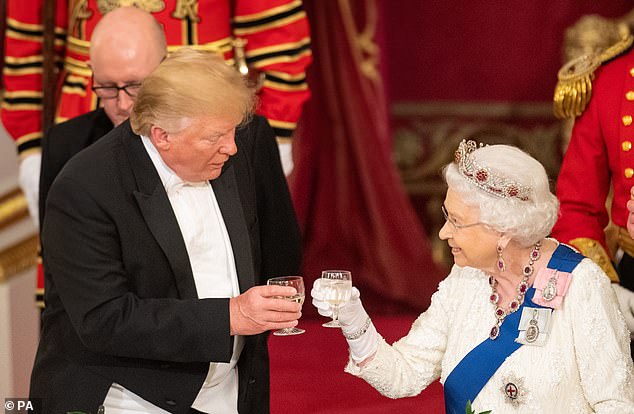 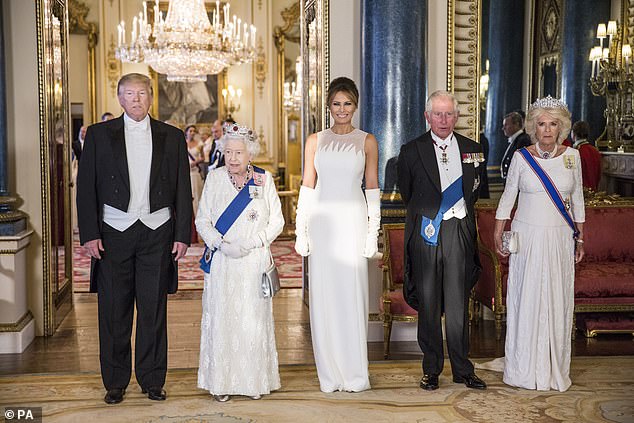 Mr Trump was hosted by the Queen at a state banquet at Buckingham Palace on Monday, and she told him yesterday: ‘I hope you come to this country again soon.’

As they parted ways at the end of his state visit, following a D-Day service in Portsmouth, the President told her: ‘It was a great honour to be with you.’

Mr Trump also spoke this week of his admiration for another senior royal in the Prince of Wales, saying he was ‘moved’ by Charles’s environmental views.

Charles has long warned of ecological disaster, but Mr Trump claims climate change is a ‘Chinese hoax’ and pulled the US from the 2015 Paris Agreement.