“THIS isn’t a time for blame,” says Roger Daltrey of the coronavirus crisis. “Let’s all pull together and get through this.”

Filled with British bulldog spirit, The Who’s power-house singer is just the person you want on your side in times like these. 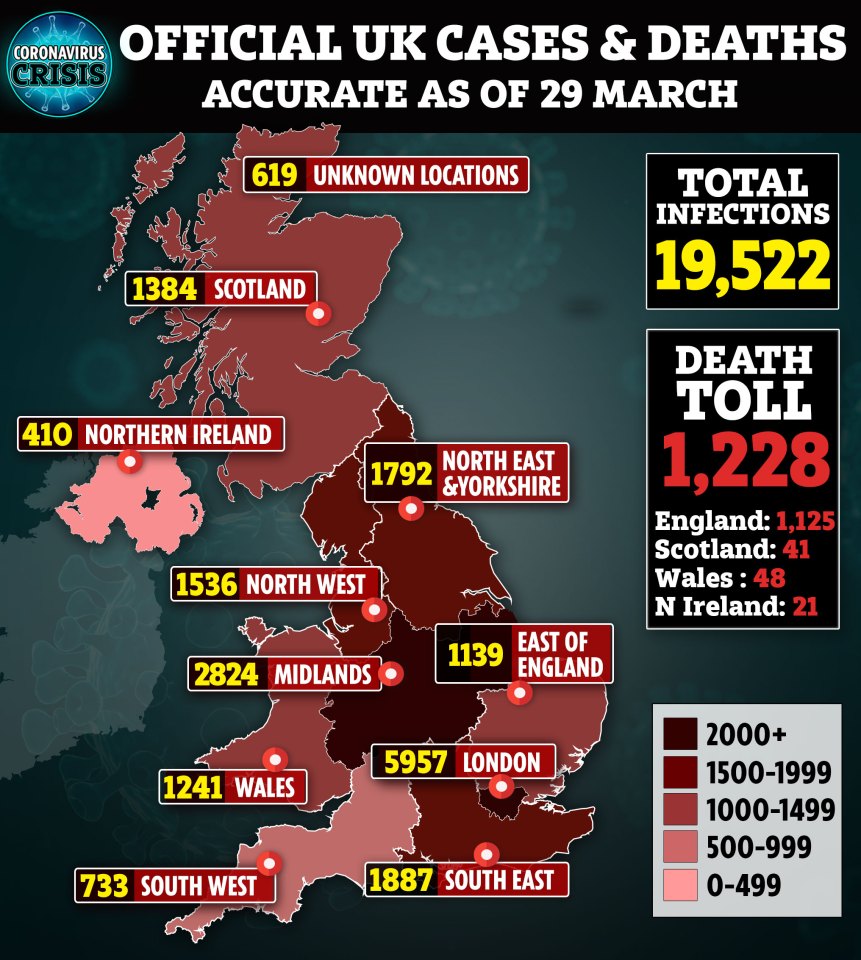 “Go get some 60 per cent vodka if you need hand sanitiser,” he continues. “It’s the best but if you get the virus, drink the rest!”

Daltrey’s a fighter . . . always has been, always will be.

During the early years of The Who, he was never afraid to use his fists to settle an argument.

Today, his legendary rucks with bandmates Pete Townshend and Keith Moon are distant memories but he has a different kind of battle on his hands.

The rocker takes a selfie on stage at the 2017 Teenage Cancer Trust gig, which this year has been cancelled due to the coronavirus crisis[/caption]

On Saturday night, the Royal Albert Hall was closed and silent due to the coronavirus lockdown.

London’s iconic concert venue should have been packed to the rafters for The Who’s show in aid of the charity Daltrey has worked so tirelessly for, Teenage Cancer Trust.

It’s not Daltrey’s nature to hide his disappointment or his passion for his cause.

So he reached out to me to share his concern for young cancer patients and issue a defiant rallying cry for the charity.

Despite the nation being gripped by financial uncertainty, the 76-year-old rock legend hopes TCT will not be forgotten.

“Can you imagine being 15 or 16 years old and told you have cancer?” he asks.

“That’s a psychological blow, that’s enough. But can you imagine finding it out during the time we’re going through now with this virus?

“The worst thing you can have with the virus is a compromised immune system.

“Every cancer patient — whatever treatment they’re on — will be compromised. It must be a bloody nightmare.

“We’d like many more people to realise that teenagers and young adults can get really aggressive, rare cancers.

“And because of their age, of course, their psychological condition is so vulnerable.”

Like so many charities, it has been denied crucial income by the cruel disease sweeping the land.

“We’re relatively small even though we provide hospital wards in the National Health Service and special services for adolescents and young adults with cancer.

“To lose that income is an enormous hit.”

He estimates the shows make a minimum of £1million for Teenage Cancer Trust and that “we’ve made almost £2million some years”.

So what of the future? “We ain’t giving up, I’m not giving up,” he affirms.

“All I can say to people who bought tickets for this year is hang on to them because The Who are already booked in for next March.

“I’ve spoken to Paul Weller and he said he’ll be there for us. So will Nile Rodgers.

“It will stop a huge headache for TCT if it doesn’t have to give money back, then have to receive it again next year.”

The gracious Daltrey thanks his team, which has been working flat out behind the scenes. “They are such fantastic people and they’ve seen a whole year’s work go down the toilet.

“I’ve seen the worry on their faces in the past month and it’s been horrible.”

He also praises the Albert Hall staff, many of whom tell him the TCT shows make it the best week of the year.

“There’s something about doing it for nothing. It creates a special atmosphere,” he says. “Especially with the teenagers being there.

“Some of the youngsters I’ve seen put us to shame. You look at them and think, ‘God, blimey, someone’s smiled on me all my life’.

“We also have to remember that with every teenager, there are parents, brothers, sisters, aunties, uncles, grandparents, all heavily, heavily affected.”

What can the public do to help TCT right now? I ask Daltrey. “Donate,” he replies.

“We’re always scraping for donations. I hate to say it but it’s an unfortunate fact of life that those ‘adopt a snow leopard’ kind of charities seem to raise ten times more than we do.

“There’s something about a spotty teenager that puts people off.

“But I admire these kids so much for their stoicism. They’re incredible and never self-pitying.”

Roger sheds light on what it must be like for young patients under the virus lockdown.

“If they are in one of our units, they will be isolated and that’s not going to be easy for them,” he says.

“They become a community of their own. They may be locked down but they’ll be a lot happier than they would have been 20 or 30 years ago.”

Daltrey is also at pains to give a shout out to the carers: “They are truly amazing people. I’ve spoken to quite a few of the nursing staff, who say they actually look forward to working on Teenage Cancer Trust wards because they create a happy environment.

“Yes, there’s a lot of suffering but there’s also an atmosphere of support and goodwill.”

This brings us to the humbling effort by NHS frontline staff in dealing with the coronavirus outbreak. “It’s Herculean,” says Daltrey.

“They are truly remarkable people as well. I would like to know why sub-standard equipment was bought. If it is sub-standard, why is it sub-standard and who the bloody hell ordered it?”

Daltrey and Townshend perform on stage in America last year[/caption]

But he adds: “Let’s not look for people to blame. It doesn’t do us any favours. Let’s just fix any problems and let’s take the health service away from being a party political football. It should be non-partisan, untouchable.”

Daltrey turns his attention to how Boris Johnson’s government is dealing with the crisis.

“I don’t think there’s a right way of handling this,” he says. “This is something we’ve never had in our lifetimes.

“People in government are doing their best. Too many people expect too much, too quickly.

To receive The Sun’s Coronavirus newsletter in your inbox every tea time, sign up here.

Get Britain’s best-selling newspaper delivered to your smartphone or tablet each day – find out more.

“We have to give them all the support we can and let’s hope they flatten the curve.”

Daltrey fears a huge spike in the British death rate over the next three weeks “would be unbearable for the public to go through”.

Yet he holds out hope. “I’m an optimist because it’s sharpening up the medicine. The IBM super-computer has identified 70 different drugs that can potentially help cure the virus.”

Though Daltrey rightly wouldn’t want it to be the main focus, I ask how the situation has affected him personally.

“Building up to lockdown has proved an absolute nightmare month,” he says. “With The Who tour, I could feel this coming.

“So we decided to cancel, which turned out to be the right decision. Again, it’s only a postponement.

“We’re going to honour that tour next year when we’re hoping all this is done and dusted and everybody’s up and running again.”

He knows that he and fellow surviving Who traveller Townshend aren’t getting any younger.

“We’re almost on our swan song. I’ll be 77 next year and I can’t imagine us going on much longer than that. We continue while I can still sing the notes, simple as that,” he says.

“My voice is not like a guitar. I can’t change the bloody strings!”

Daltrey explains that his old mucker Townshend “is going to write some songs in the down time, as he still makes fabulous music and still has something to say”.

baby can i hold you

He reveals they are releasing a single from last year’s acclaimed Who album, the anthemic Beads On One String, which somehow speaks for Teenage Cancer Trust, the NHS and all us Brits.

“The song is so apt for today,” Daltrey tells me, before quoting the chorus.

“Got to get us together like beads on one string.”

12-week isolation so tough for teens

MANY young people with cancer – and those who have previously had treatment for cancer – are at greater risk from Covid-19 because they are particularly vulnerable to infection.

They will have been told this week to completely isolate or shield themselves for 12 weeks.

This is tough for anybody, but it’s magnified when you are a teenager.

It’s so hard for parents and families, too. It’s more important than ever before to make sure specialist nurses and dedicated youth support teams are there for young people with cancer.

Our staff in the NHS are working hard to do this, often alongside personally pitching in to support the fight against Covid-19. They are truly remarkable people.

Delivering the highest quality of care to young people with cancer continues to be our number one priority and we are working alongside NHS Trusts to support any changes they might need on a case-by- case basis.

We want everyone to support our remarkable NHS and the staff in it. We ask everyone to follow advice on social distancing and stay home – it saves lives.

There has been lots of advice for young people with cancer about how to stay safe and we have been working with other leading cancer charities to put together clear and consistent information. You can find this on the Teenage Cancer Trust website.

Now due to coronavirus, young people are facing even greater uncertainty about their treatment and feel more isolated.

From providing essential care to emotional support delivered by phone, email and Skype, our staff are working hard in a fast-changing situation.

We will do whatever we can to make sure that young people and their loved ones do not face cancer alone.