With award season well and truly underway, Hollywood’s hottest stylists are no doubt being run into the ground trying to keep up with the demand for elegant red carpet ensembles – and it seems that the pressure is proving a bit too much to handle for some.

At least if the looks on the Critics’ Choice Awards red carpet are anything to go by; the A-list event, which honors the best and brightest in film and television, saw a slew of stars missing the fashion mark, with dozens of guests making awful fashion faux pas, from an accidental flash of shapewear to over-the-top patterns and prints that were almost painful to look at.

Taking place just one week after the Golden Globes, the Critics’ Choice Awards leaves little time for real rest and relaxation – however it does leave at least a few days for some style reflection, an opportunity that it appears some did not take. 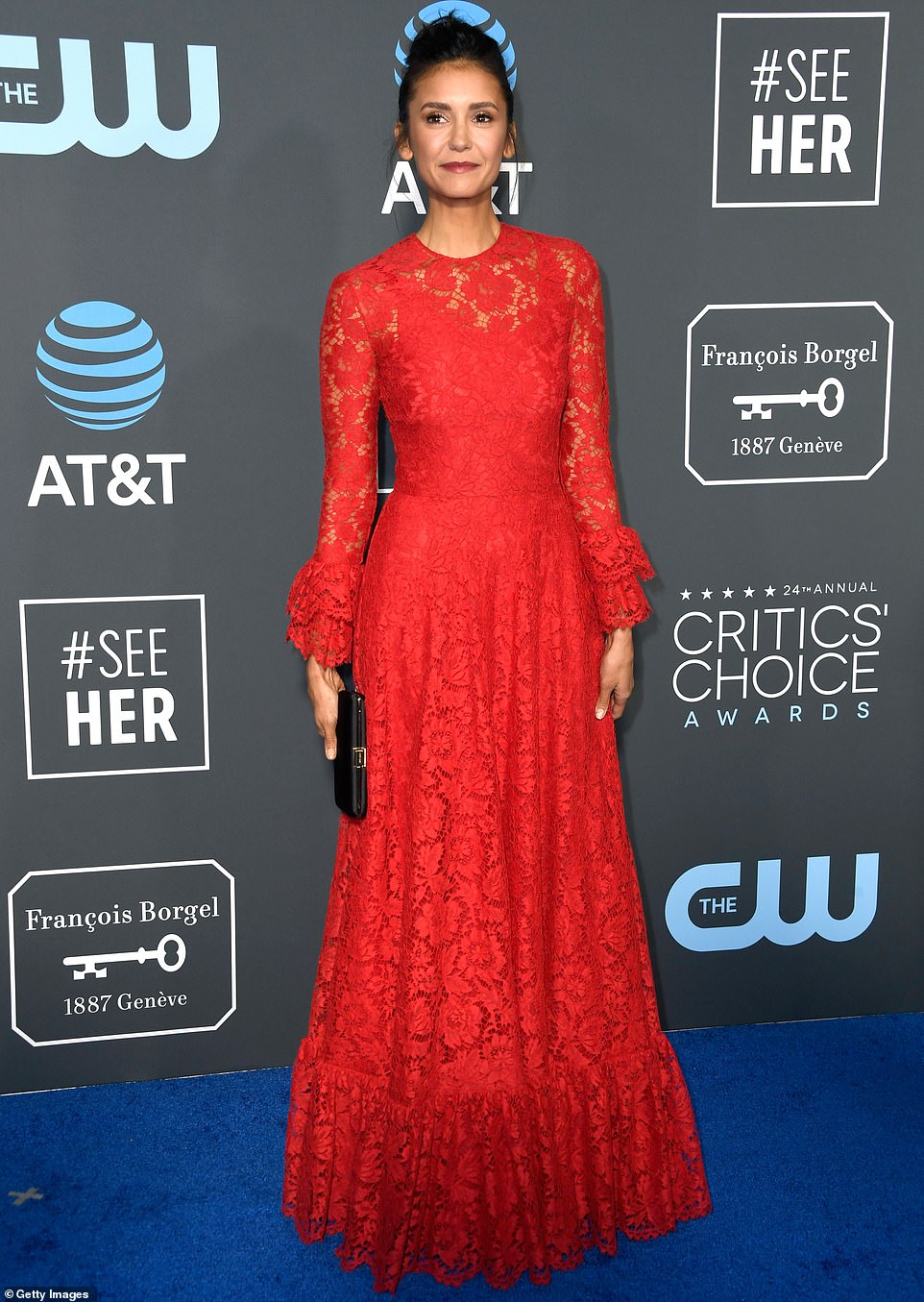 Birthday girl: Nina Dobrev can perhaps be forgiven for picking such lacklustre lace frock – which looked like an old costume from her hit show The Vampire Diaries – given that she was busy celebrating her 30th at a festival-themed party hours earlier 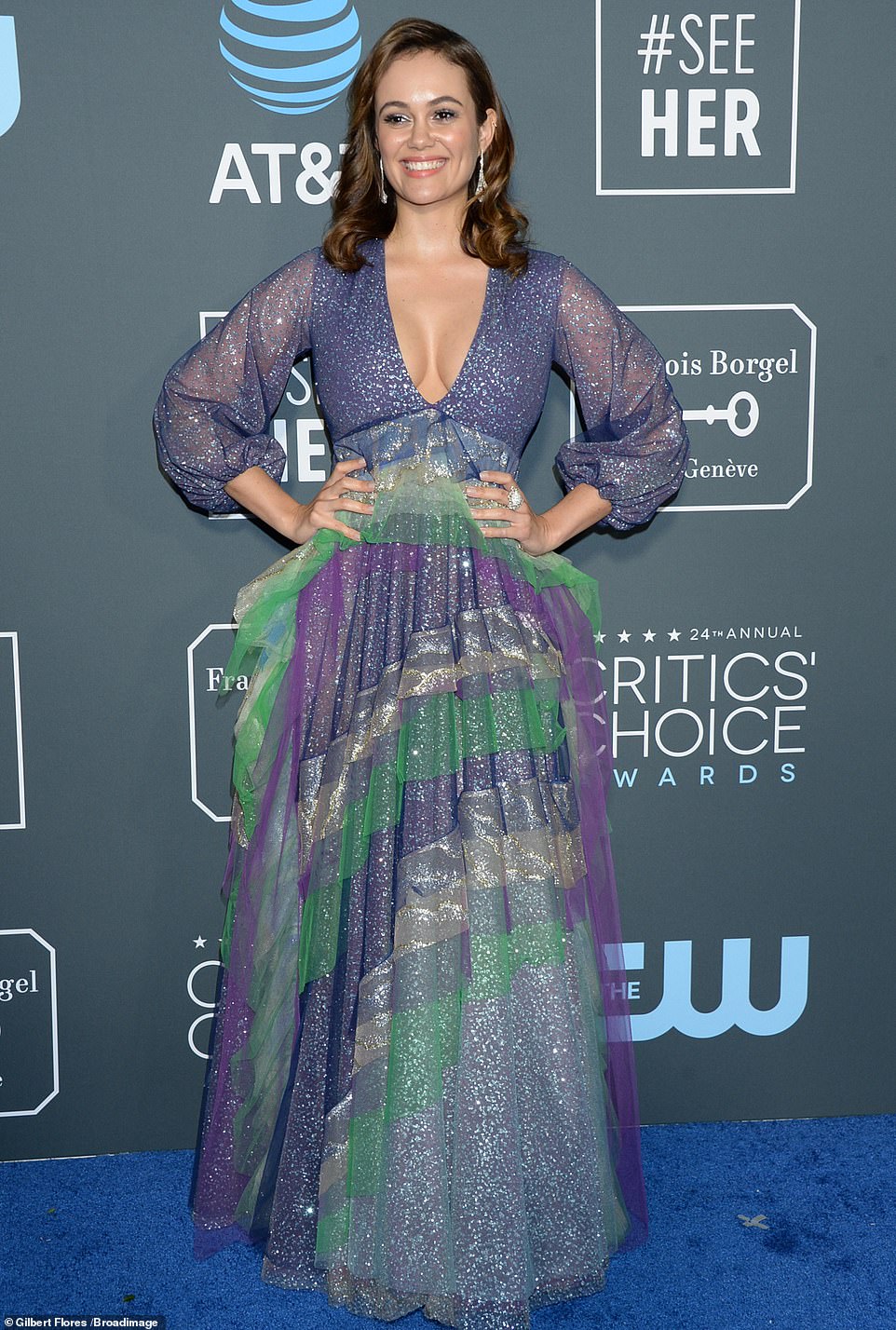 Glitter bomb: Actress and nominee Dina Shihabi’s sparkling gown was incredibly over-the-top, and didn’t need nearly so much layering or shimmer in order to stand out from the crowd

Frock horror: Without the pink curtain-style tassels, Carrie Keagan’s dress would have been elegant and glamorous 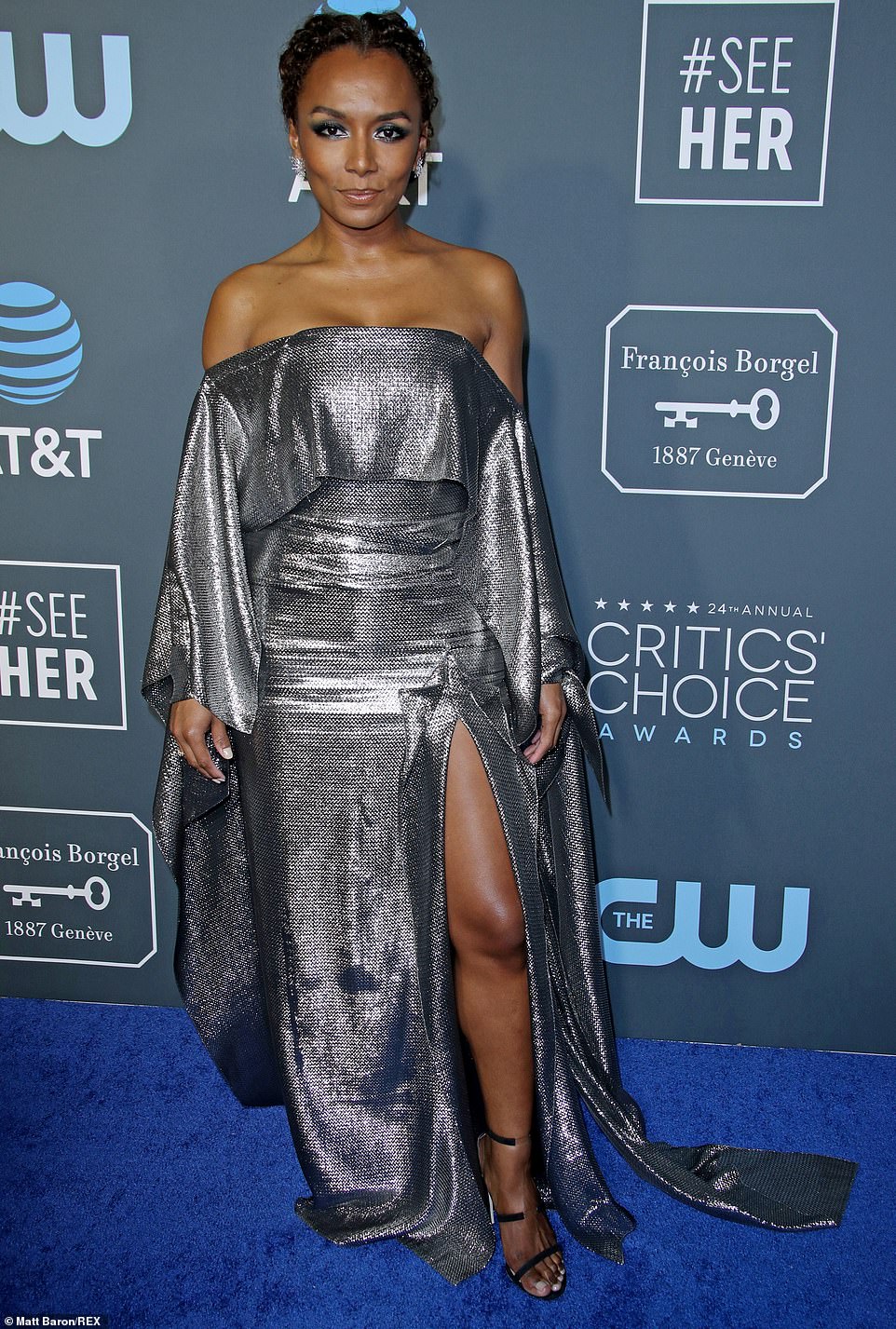 Keeping warm? Janet Mock appeared to be wrapped up in tinfoil as she made her arrival on the red carpet

Birthday girl Nina Dobrev can perhaps be forgiven for her less than stellar red carpet style, given that she had been busy celebrating her 30th at a festival-themed ‘Ninachella’ party just hours before the awards kicked off.

Sadly, she looked anything but the belle of the ball as she arrived on the red carpet at the Critics’ Choice Awards, wearing a rather drab red lace dress that looked not unlike the period costumes she wore on hit CW show The Vampire Diaries.

Her hair also looked a bit lackluster, having been coiffed into a rather messy updo that would have been more appropriate for her Coachella-inspired birthday event than a red carpet appearance.

Actress Olivia Munn, 38, was another unusual feature on the worst dressed list at this year’s award ceremony, wearing what looked like a flamenco-themed beach gown that looked most out of place at a glittering celebrity event.

29-year-old nominee Dina Shihabi went way too far with her gown, which featured so many layers of shimmery material that it looked not unlike a mermaid or Rainbow Fish costume that had been picked up at a party store en route to the awards show.

All wrong in white: Both Allison Janney (left) and Indya Moore (right) were dwarfed by the immense swathes of white fabric that made up their ensembles, leaving them both looking as though they were wearing hacked-up bed sheets 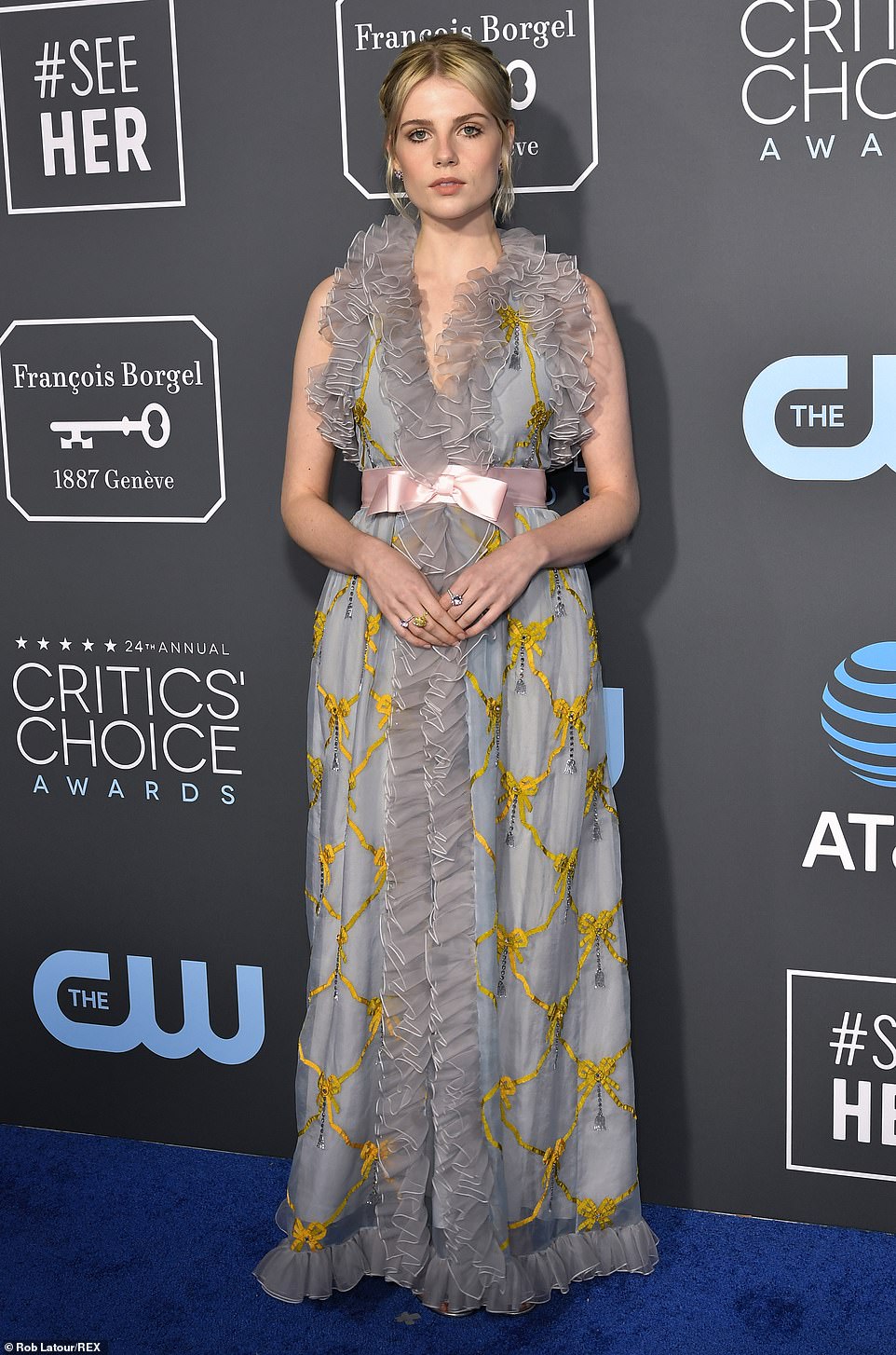 Too far with the frills: Bohemian Rhapsody star Lucy Boynton looked like the was wearing a dress made from her grandmother’s tea cozy thanks to the excessive use of frills – and clashing girlish bow 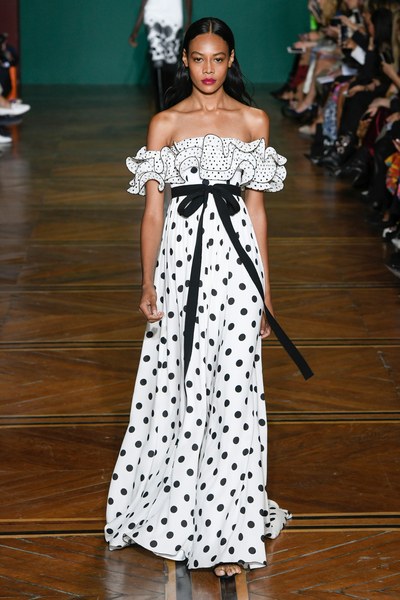 Shop the label at MATCHESFASHION.COM

Olivia Munn looked sensational as she stepped on to the red carpet at the 2019 Critics’ Choice Awards.

The talented actress stunned in this monochrome maxi dress by red carpet-regular label, Anrew Gn. The ruffle bardot is super flattering, and the velvet bow belt adds a subtle touch of glamour.

Unfortunately, the dress isn’t available to buy, but do follow the link through to MATCHESFASHION.COM to add a spot of Andrew Gn to your wardrobe.

Or copy Olivia by shopping the options in our edit below. Asos, J.Crew and Boohoo have got some more wearable white polka dot dresses!

Lady in red: Annie Potts, a nominee for Supporting Actress in a Comedy Series, wore a vibrant crimson dress that unfortunately looked several sizes too big for her 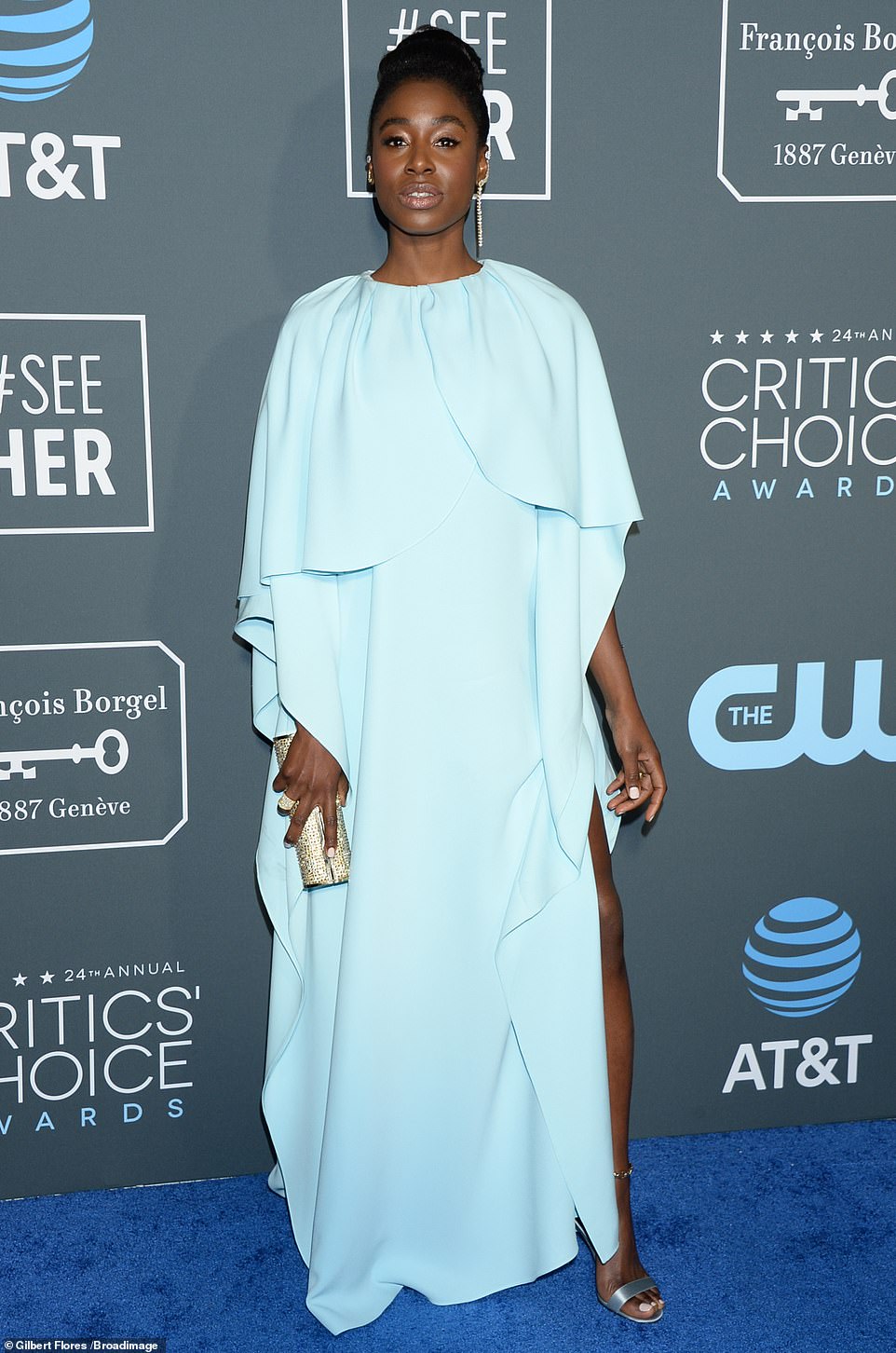 More is less! Kirby Howell-Baptiste was swamped by the excess of pale blue fabric that made up her gown

Green means… no: Our Lady J’s garish jumpsuit looked as though it might have been better suited to an afternoon at the beach rather than a glamorous red carpet, while Judith Light’s polka-dot number looked a bit like a clown costume

Carrie Keagan, 38, only narrowly missed the mark with her look – which was beautiful and elegant to a point. That point being the bizarre pink tassels that hung from her sleeves and dangled well below her hands, and looked like they could well have been yanked straight from some curtains at a nearby hotel.

Allison Janney, 59, and Indya Moore, 24, coordinated their fashion faux pas, with both women opting to wear enormous white ensembles that totally swamped their frames, and looked rather like they were wearing intricately-wrapped bed sheets on the red carpet.

British Bohemian Rhapsody star Lucy Boynton, 24, must have gone bit Radio ga ga Radio goo goo when she was picking out her ensemble, which appeared to have been modeled on a retro tea cozy.

The grim gray frills aged her unnecessarily, and were made that much worse by the clashing pink bow that was tied around in her waist – perhaps in an attempt to add a feminine touch to the otherwise drab gown.

Unfortunately, the dress needed more than a simple bow to rescue it from the depths of the worst dressed list. 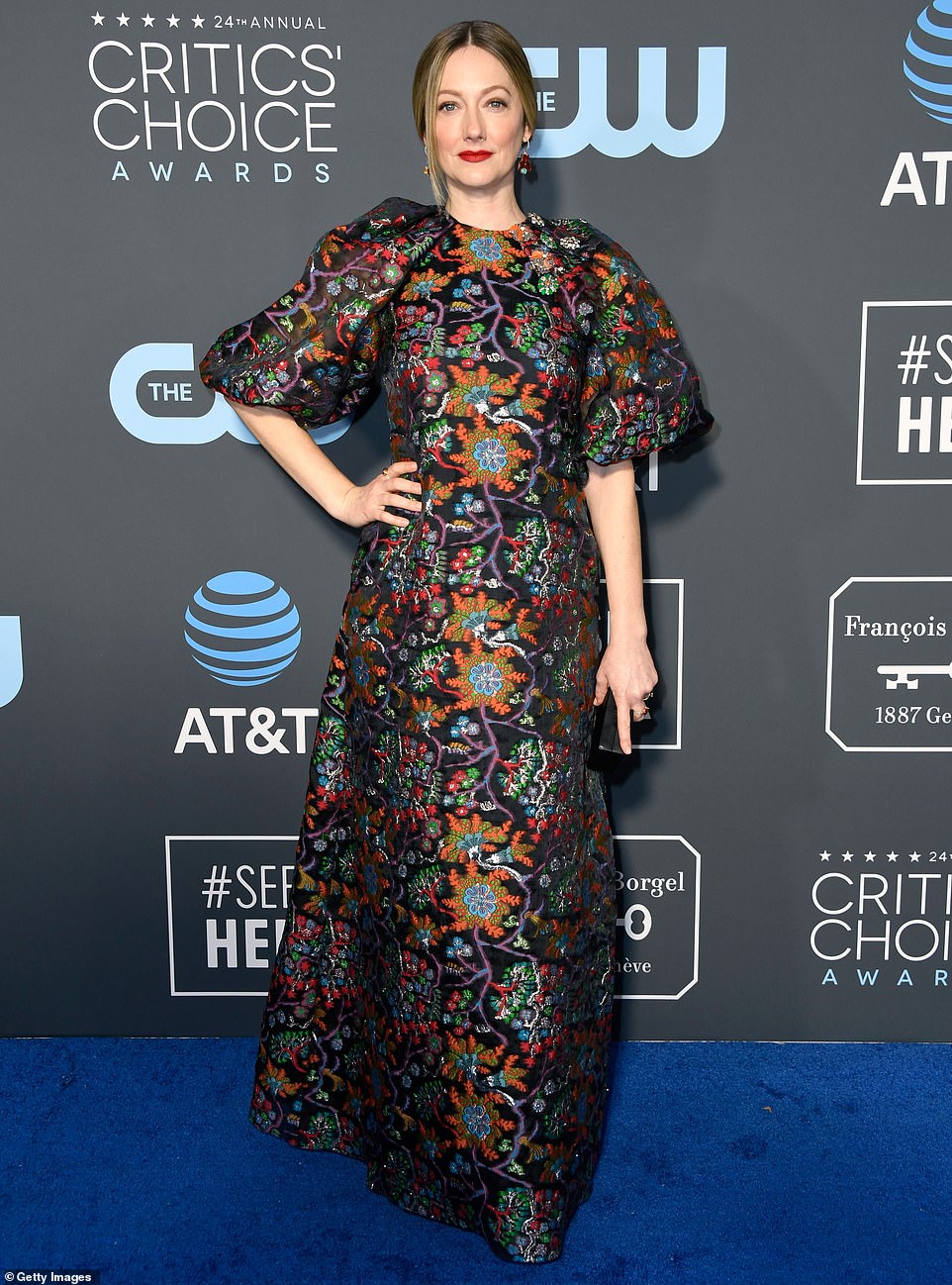 Too far: The print on Judy Greer’s dress looked more suited to a decorative wall hanging than a red carpet gown

Oh dear: Not only was Terri Seymour’s dress a rather unflattering shape, it also revealed what appeared to be her shapewear thanks to the incredibly high slit in the fabric 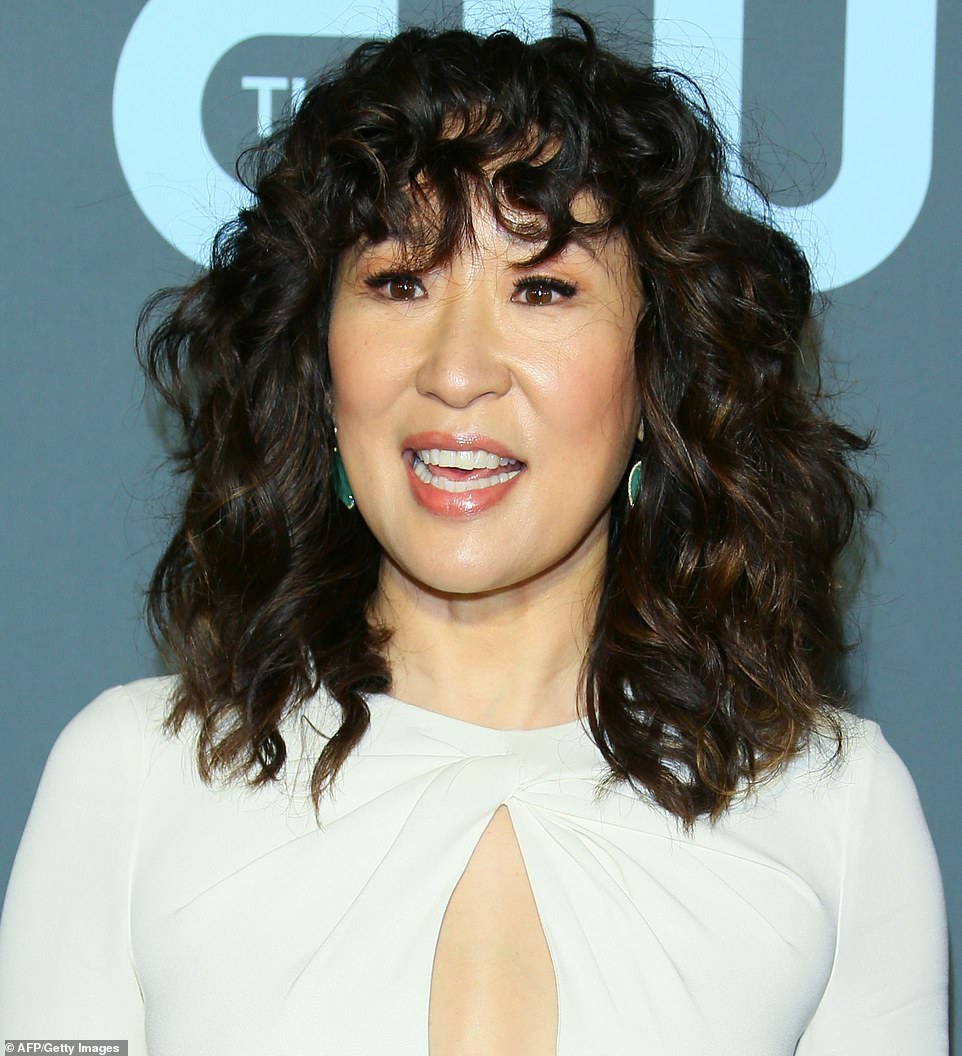 Are you under there? Sandra Oh’s dress and general beauty look was stunning, however her bangs appeared to be a bit too long for her to really see properly 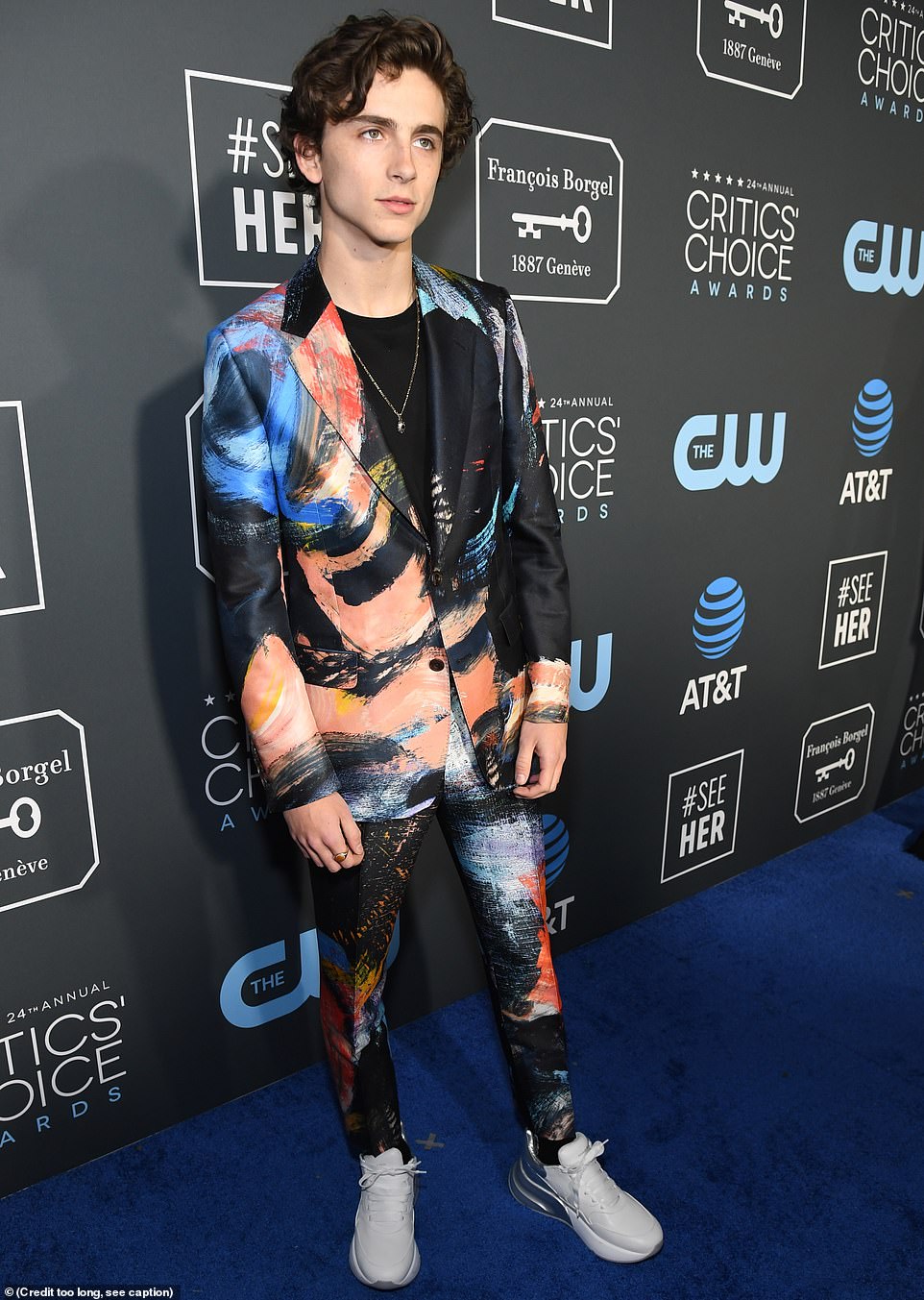 A rare fashion fail: The normally-stylish Timothee Chalamet is another star who fell prey to an unappealing print, which was made all the more awkward thanks to the addition of metallic-trimmed sneakers

Careful! Billy Porter was in danger of tripping up over the ridiculously large orange sash that completed his very shiny suit

Actress Annie Potts’ gown could well have been brilliant, were it not for the fact that the 66-year-old star appears to have chosen a design several size too large for her. The dress appeared to be too long, and it sagged sadly around her mid section which did little to create a form-flattering silhouette.

Meanwhile, 31-year-old Kirby Howell-Baptiste drowned her frame in a high-necked pale blue gown, that looked like several layers of material had been wrapped around her body, before she was sent down the carpet. While the color of the dress suited her to no end, the shape was, sadly, less than dazzling.

There were plenty of stars who also chose to make a move away from the traditional gown at the Critics’ Choice Awards, with winning pant-focused looks seen on the likes of Julia Roberts and Claire Foy.

Judith Light, 69, and Our Lady J, 33, however, didn’t manage to pull of the style with as much aplomb – quite the opposite in fact.

While musician Our Lady J arrived in a rather garish green jumpsuit that would have been better suited to the beach than a red carpet, Judith appeared as though she had borrowed some fabric from a clown costume in order to fashion her polka-dot number. 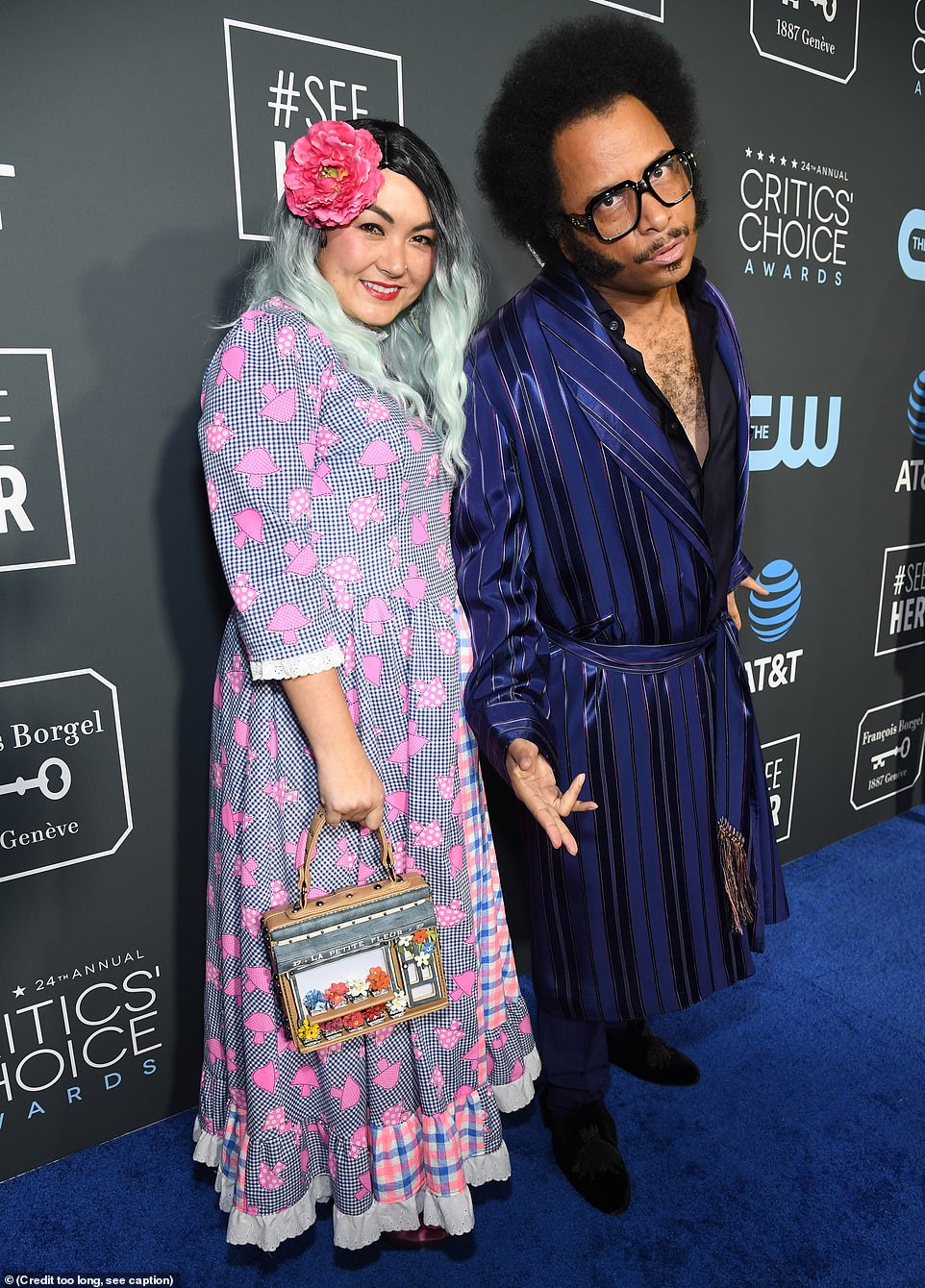 Pajama party? Rapper Boots Riley (right) and his guest looked as though they had just climbed out of bed before the event

Too bright? It’s unclear whether Darren Criss was feeling sensitive to the light, or whether he wore yellow glasses in order to make a bold style statement, but couple with the rather crumpled suit, they didn’t make for the best red carpet look 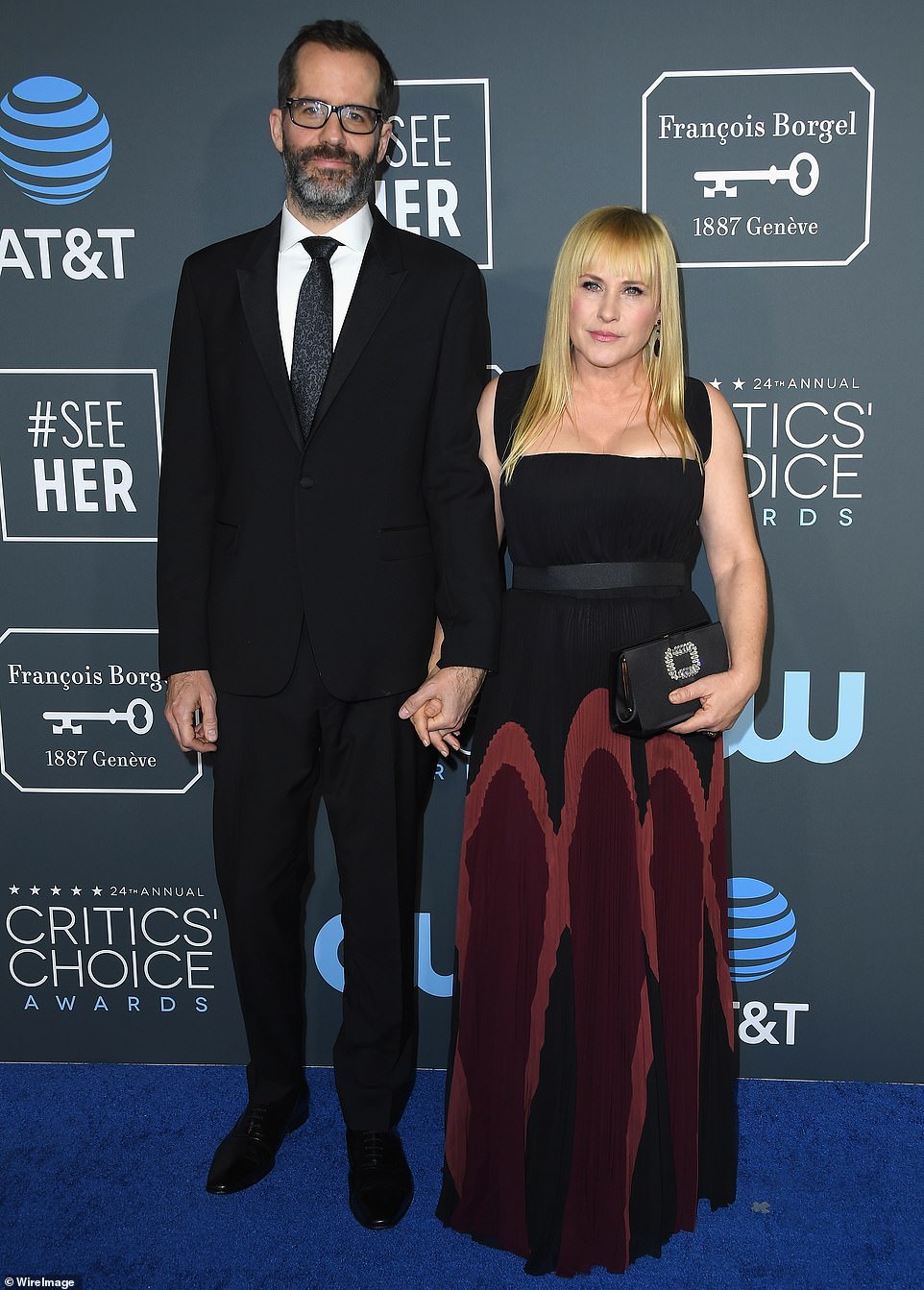 Whoops: Patricia Arquette’s dress flattered her figure to no end, but the material looked as though the dye had run in the wash, while the diamante embellished clutch looked more tacky than elegant

Not-so-dapper dudes: Both Ken Jeong (left) and Lakeith Stanfield (right) missed the mark in their suits; Ken’s trousers looked several sizes too big and did little to take away from a garish jacket, while Lakeith’s checkered outfit was a bit of an eyesore