Theresa May has said a joint UK and Ireland bid to host the World Cup would help strengthen relations between the two countries post-Brexit.

The Prime Minister described the ‘tantalising’ prospect of hosting the 2030 tournament as she outlined ways to bolster the bilateral relationship with the Irish Republic when the UK leaves the EU.

Diplomatic ties between London and Dublin, which have improved markedly in recent decades, have been put under renewed strain during the Brexit process.

On a visit to Belfast today, Mrs May said people on both islands ‘yearned’ for a ‘close and trusting’ relationship. 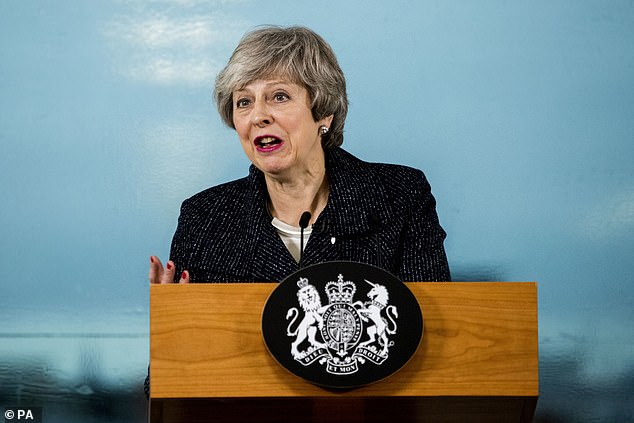 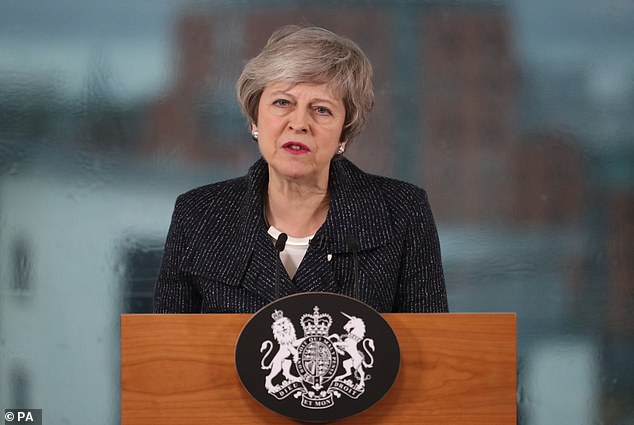 ‘Both the UK and the Irish Governments have already made clear that we would support the tantalising possibility of a joint UK and Ireland World Cup Bid for 2030, should our respective football associations choose to pursue this,’ the Prime MInister said.

‘I know there is a sense that many British people do not know enough, or understand enough, about the complexity of the long relationship between the UK and Ireland.

‘And a sense that some Irish people are less familiar with the forces and motivations that help to shape views in the UK. 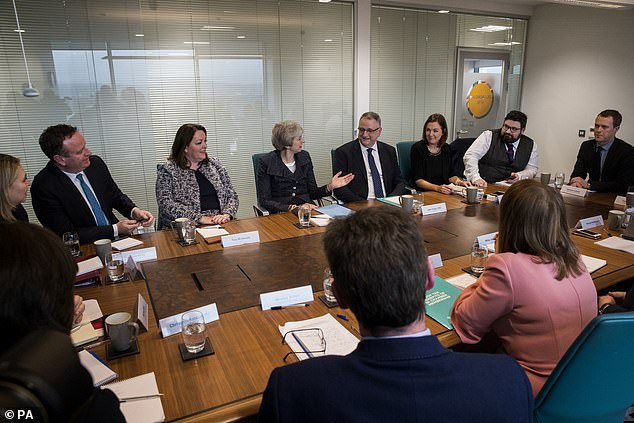 Pictured: The Prime Minister at a roundtable meeting at Allstate in Belfast today

‘So as part of these new ways of coming together, I would like to us to look in particular at opportunities for our young people to discuss these issues and others in a structured way and to reflect on their vision for our future relationship.’

Mrs May, who is struggling to break the political impasse over Brexit, gathered Cabinet before heading to Northern Ireland as the UK faced the possibility of crashing out of the EU in less than eight weeks.

She had earlier vowed to ensure there is no return to the ‘borders of the past’ and said the people of Northern Ireland and the Republic did not have to ‘rely’ on the EU to avoid a hard line dividing them.

What happens next in the Brexit process?

Later this week: Theresa May is expected to return to Brussels to ask for changes to the Irish backstop, after MPs backed an amendment calling for ‘alternative arrangements’.

February 13: If no new deal has been reached, Mrs May will address MPs again on this date and her Government will put a further motion before the House of Commons. MPs would then be able to vote on further amendments, potentially on February 14.

March 29: Brexit day. The European Union (Withdrawal) Act of 2018 fixed 11pm on March 29 as the time and date when Britain will leave the EU. If no agreement has been reached by then, the UK – in spite of the Commons vote against a cliff-edge Brexit last night – will leave without a deal.

She drew the ire of Conservative Eurosceptics by saying she is not proposing to scrap the backstop from the Brexit deal altogether – despite previously saying it must be replaced with ‘alternative arrangements’.

It was announced earlier that Mrs May will go to Brussels for more crunch talks with Jean-Claude Juncker on Thursday.

The PM had signalled last year that she would offer Government support if the Football Association decided to move forward with a joint bid, with the caveat that ‘the decision on whether to bid is, of course, for the football associations to make’.

‘But if they decide to go forward, they can count on this government’s full support,’ she said.

Critics today blasted the renewed proposal as ‘politics at its most pathetic and cynical’, and social media users pointed out that a joint bid would mean FIFA would have to keep five places free for the host nations.

In Belfast today Mrs May also said recent joint UK and Irish commemorations to mark the sacrifices of the First World War demonstrated the strength of the bilateral links.

‘Today those ties of family and friendship between our countries are more important than they have ever been,’ she added.

‘And I believe there is a yearning in the hearts of all the peoples of these islands for a close and trusting relationship between all of us, and an absolute horror that we should take even a single step backwards in the progress we have collectively achieved. 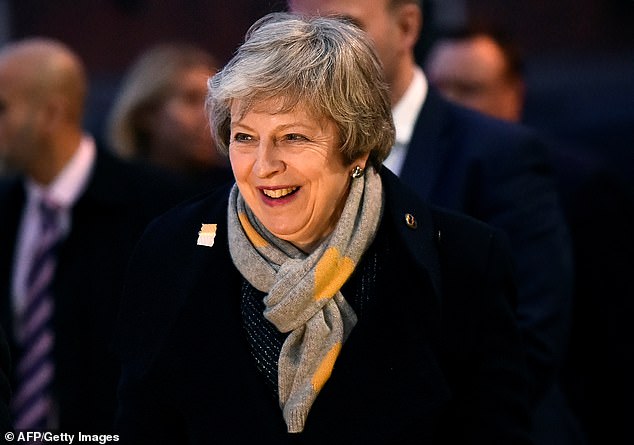 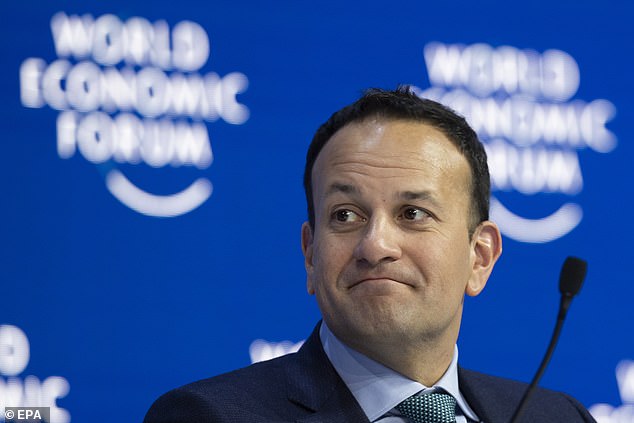 Mrs May said she wanted to ‘work closely with the Taoiseach Leo Varadkar… to strengthen the bilateral relationship we have built’ (Leo Varadkar, pictured January 2019)

‘So I want to work closely with the Taoiseach Leo Varadkar and the Irish Government, as so many of our predecessors have before, to strengthen the bilateral relationship we have built.

‘And this can and should take many forms.

‘We already have the British Irish Intergovernmental Conference, and regular Summits between UK and Irish politicians. But as we leave the European Union, we will need to establish new ways of coming together to develop further our unique relationship.

‘For example, the Irish Government has suggested annual meetings where the Prime Minister and Taoiseach, together with senior ministerial colleagues, come together to discuss the big issues of the day.

‘We will also want to strengthen our economic relationship and have already together identified areas like construction and smart cities as ripe for enhanced collaboration.

Tomorrow Mrs May is due to hold talks with Northern Ireland’s political leaders including the DUP’s Arlene Foster – who today restated her opposition to the ‘current backstop’.

Chaos for Ryanair passengers as airline loses bid to block strike
Woman speaks out about being raped for two hours after hotel staff gave man key card to her room
Britons line up to buy takeaway alcohol as bars reopen over bank holiday weekend
UK weather: Britain enjoys more unseasonably warm festive conditions
Train your brain to put down that Kit-Kat: Experts advise NHS adopts a programme to dampen cravings
STEPHEN GLOVER: The vanity of one man must NOT be allowed to override the wishes of 17million people
Tourists offered the chance to explore the 35,000ft-deep Mariana Trench with Eyos Expeditions
Woman who shared a picture of her 'fine' dermatologist online is blasted by Twitter users