Theresa May left the door open yesterday to delaying Britain’s exit from the EU.

Downing Street insisted there were no plans to extend the Article 50 departure date beyond the planned March 29.

But the Prime Minister failed to rule out the chance of this falling by the wayside in the wake of Tuesday’s crushing Commons defeat for her withdrawal agreement.

Chancellor Philip Hammond is reported to have told business leaders the Government would not block a move by former Tory minister Nick Boles to empower Parliament to rule out No Deal and delay Article 50 by nine months.

And Justice Secretary David Gauke warned there was little time left to secure the scheduled exit. 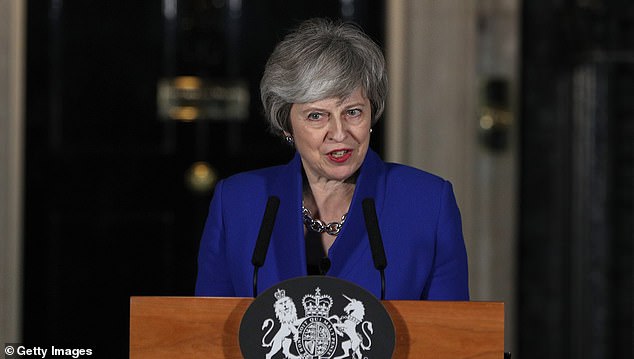 Theresa May, pictured outside Downing Street last night, left the door open to delaying Britain’s exit from the EU with an extension of Article 50

Brussels sources last night also indicated the EU was ready to approve an extension of Article 50 for up to a year, until 2020, to avoid No Deal.

Commons Leader Andrea Leadsom, a Brexiteer, yesterday ruled out a Brexit delay, saying: ‘We are clear we won’t be delaying Article 50 and we won’t be revoking it.’

But Mrs May was more equivocal. Yesterday she faced repeated calls from MPs to delay Brexit to allow more time to develop an alternative plan.

Tory MP Sarah Wollaston, who is also calling for a second referendum, urged Mrs May to ‘extend Article 50 to allow us to put a realistic negotiated Brexit direct to the British people’.

Former Tory chancellor Kenneth Clarke said such a move was needed ‘to give us time to sort out what we now propose to do’.

In reply, the Prime Minister said she did not want to extend Article 50 – but did not rule out the possibility if more time is needed to secure a deal and get it through Parliament. 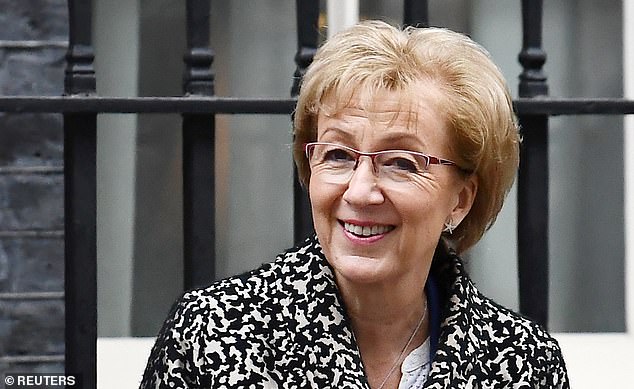 Andrea Leadsom (pictured), the leader of the House of Commons and a Brexit supporter, said Article 50 would not be revoked or extended but the PM was more equivocal

She said: ‘The Government’s policy is that we are leaving the European Union on March 29. The EU would extend Article 50 only if it was clear there was a plan that was moving toward an agreed deal.’

Many ministers believe privately a delay is inevitable because of the sheer weight of legislation the Government must pass before Brexit day. Any extension needs to be approved by all 27 other EU countries.

Peter Altmaier, Germany’s economy minister, said: ‘The EU should allow for additional time in order to achieve a clear position by the British Parliament and people. I would see this as a reasonable request.’

The PM has told MPs on more than 70 occasions that she will lead Britain out of the EU on March 29.

Last week she warned the Cabinet delaying Brexit beyond the next European parliament elections in May could spark a Ukip resurgence. 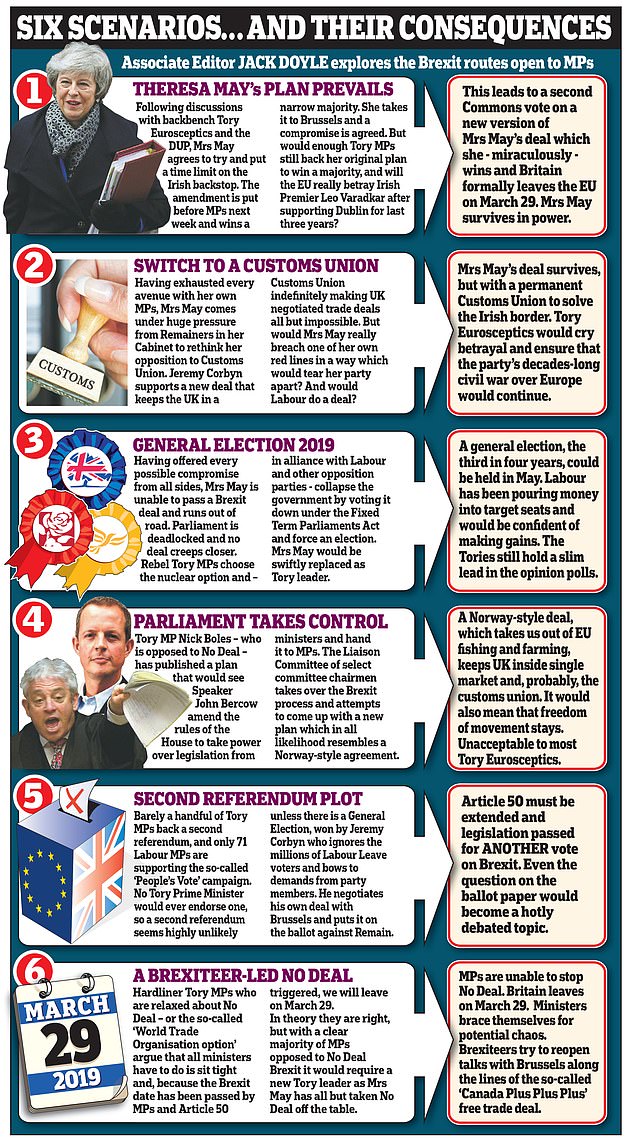 Heartwarming moment a woman, 29, surprises her grandparents with a new home in Hawaii
'Jilted John' welcomes a baby boy with fiancée five years after she dumped him
Three people are injured as circus-style seating collapses at Manchester's Winter Funland
World's oldest dry cleaners closes after 187 years in central London
Could medical cannabis be the new thalidomide?
Carers 'murdered 19-year-old woman with learning difficulties and claimed her benefits for 20 years'
House passes $2 trillion bailout despite lone GOPer Thomas Massie's bid to force a full-scale vote
Family forced to sleep in one room because cowboy builder 'destroyed' home and fled