Three giant tortoises, a colony of fruit bats and a meerkat have died after a huge blaze broke out at a wildlife sanctuary this morning.

Fire crews were called to Gentleshaw Wildlife Centre in Staffordshire shortly before 6am and found the fire had ripped through one of the enclosures.

The sanctuary is home to more than 30 species including exotic birds, primates, reptiles, raccoons and cats.

The cause of the fire is still unconfirmed but reports suggest it may have been due to an accident with heating equipment.

The centre, which costs £5 for adults and £4 for children, is closed today and will likely reopen on Wednesday. 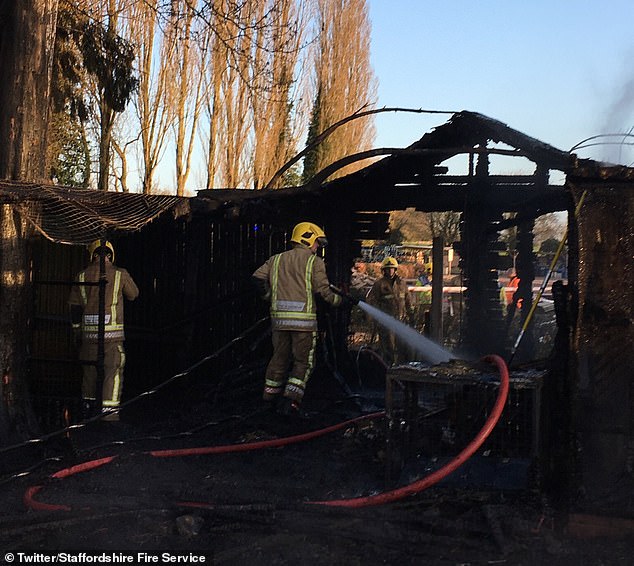 A fire at Gentleshaw Wildlife Centre in Staffordshire, pictured, has killed three tortoises and a meetkat this morning. Pictured are firefighters dousing a burnt out enclosure

Jenny Morgan, who runs the centre, said staff were devastated at the deaths of the animals.

She paid tribute to ‘the sweetest meerkat’, named Basil, and revealed his mate Sybil ran out of the enclosure to safety.

She told the BBC: ‘She [Sybil] was more sensible than Basil and ran outside.

“The vets have checked her over and she’s a bit shook up… Our first priority is her, rebuilding and then finding her a new friend.”

Ms Morgan also thanked the person who alerted the fire service and said without prompt action the blaze ‘could have been much worse’.

Gentleshaw opened as a bird of prey hospital in 1987, founded by former gamekeeper Rob Smith, who was inspired after treating an injured tawny owl and returning it to the wild months earlier.

According to a statement on the centre’s own website, enclosures are ‘not state of the art’ but designed to provide animals with as much room as possible.

The statement said: ‘Our aim is always to give safe and caring homes to animals which have nowhere else to go and to provide them with a much better quality of life than they had before coming to us.

‘Our enclosures are not state of the art, or open plan. They are designed to provide as much room as possible for the animals to use, which means mesh walls and roofs to provide maximum surface area for the animals.’

He initially would rescue and treat birds in his back garden but decided to expand and set up a sanctuary for other animals.

The wildlife centre as it is today opened in 1993 and Mr Smith helped design and build the enclosures personally, appearing on BBC children’s programmes Blue Peter and The Really Wild Show to raise awareness of its work.

He died suddenly in 2003 and the centre, a registered charity, is now run by his eldest daughter Jenny, a qualified zookeeper who worked alongside her father for several years.

‘One enclosure was well alight on arrival. Sadly three tortoises and a meerkat could not be saved.

‘The fire affected power cables, some neighbouring properties without power.’ 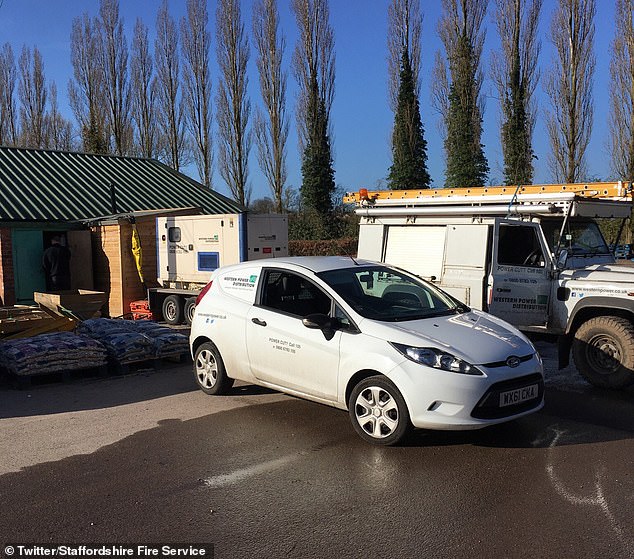 Staffordshire Fire Service arrived at the scene just before 6am and found one enclosure ‘well alight’, with the blaze apparently caused by heating equipment

In 2016, Ms Morgan was awarded the British Empire Medal for services to wildlife rescue, rehabilitation and conservation in the Queen’s 90th Birthday Honours.

According to its website, Gentleshaw aims to provide the ‘best care and welfare’ for the animals it provides for.

The website says: ‘Some of the animals we take in have never seen their own kind before, this can have terrible effects on species such as primates as they are naturally sociable.

‘Some animals have not been fed the correct food, Some kept in the wrong type of housing and some of the birds come in never having been able to stretch their wings or see day light.

‘We have many improvements we would like to make and projects we wish to complete, only lack of funding stands in our way, as we rely solely on donations from the public and money raised by people coming to the centre as visitors, or on one of our Bird Of Prey experiences.

‘We always give our residents the best we can with the resources we have.’