The graves of fallen British war heroes have been deliberately smashed by thugs in the run-up to the 75th anniversary of the D-Day landings.

Those damaged include a headstone commemorating 21-year-old air gunner Sgt Peter William Bilsborough, who drowned when his plane caught fire and fell into the sea while returning from a Second World War mission.

The grave for First World War driver Arthur Sheard, who died at the Somme, was also damaged among others at Hirst Wood burial ground in Shipley, near Bradford, West Yorkshire.

Police are investigating the vandalism, believed to have been carried out on Monday or Tuesday this week but found yesterday, while community members have branded the heartless vandals a ‘disgrace’. It is unclear whether the graves were targeted.

The Commonwealth War Graves Commission, which donated the graves, said they were ‘deeply upset’ by the damage. 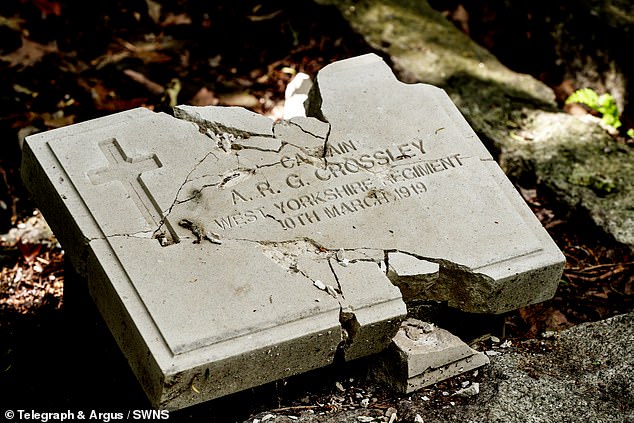 Graves to fallen British war heroes have been deliberately smashed by thugs in the run-up to celebrations of the 75th anniversary of D-Day. (Pictured) The smashed grave of James Grimshaw Crossley, who helped train the Bradford Pals 1st Battalion 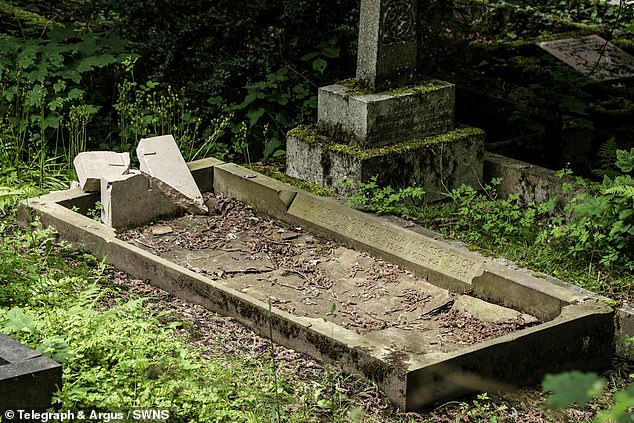 The graves were damaged at Hirst Wood burial ground in Shipley, near Bradford, West Yorkshire. They had been donated by the Commonwealth War Graves Commission for the 75th anniversary

Horrified members of the local community have reacted with anger.

Pauline Bradley-Sharp, secretary of Hirst Wood Regeneration Group, said: ‘Some people have got no respect for families’ feelings.

‘It hurts my heart to see this, it’s a terrible thing to do. It’s a disgrace.

‘I haven’t got anyone in the burial ground but we are all affected by this, and it must be horrible for the families who have got their heroes buried there. 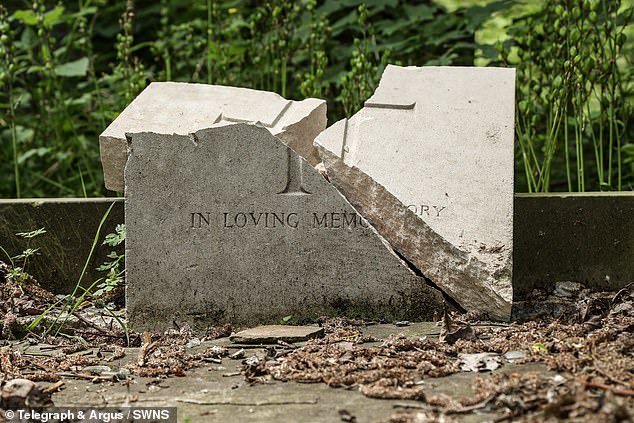 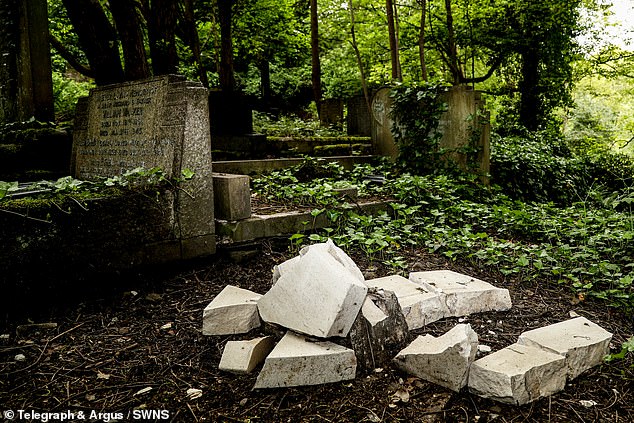 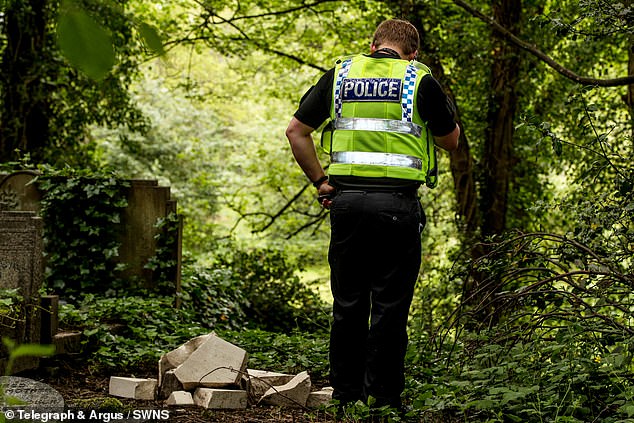 ‘D-Day is a very important day for us all and it is just dreadful what they have done.

‘If I could get hold of the people responsible I would give them a good smack round the ear.’

Richard Coomber, who is also a member of the group, added: ‘It is disgusting; it’s hard to think of suitable words to describe these people.

‘On this day of all days, you have to presume this was deliberate timing.’

The Commonwealth War Graves Commission said in a statement: ‘We are deeply upset that someone has shown such a complete lack of respect on the 75th anniversary of D-Day, a day when so many tens of thousands assembled around the world to reflect and pay deserved respect to the war dead.

‘This is thoughtless vandalism and our staff have recently arrived at the cemetery to assess the full extent of the damage.

‘Six of the eight war graves at this site were targeted and we will now clear away any debris and lay temporary markers.’

‘We will ensure all the damaged war graves at Hirst Wood are returned to a state befitting their sacrifice and continue to care for them now and always.’

Carole Ver, 75, from Nab Wood, walks her dog around the burial ground two or three times a week.

She said: ‘I’m really upset because I’d just been watching the commemoration of D-Day on the television and then I walk round to see that. It’s appalling.

‘It’s the war graves that have been singled out – I would say at least seven or eight of them. They’re the white ones and they’ve been smashed to pieces. It’s devastating.’ 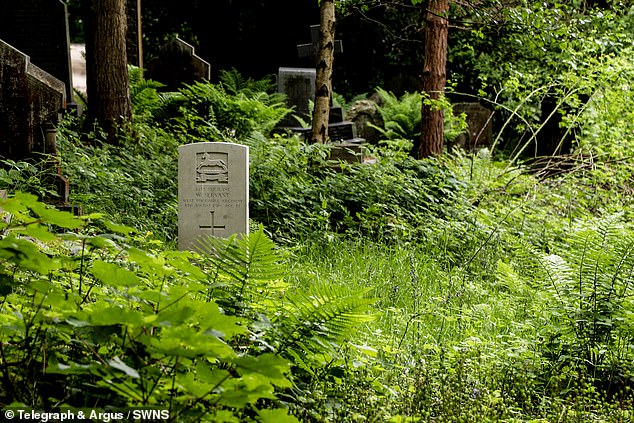 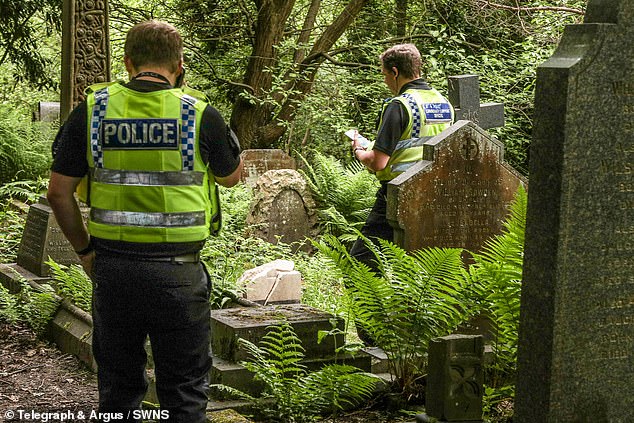 Another woman who walks through the graveyard regularly, but did not wish to be named, said the incident was ‘shocking’.

She said: ‘It’s just awful to consider the lack of thought that has gone into this damage.

‘The fact that it happened so close to D-Day is what I think has shocked people the most.

‘It just makes you despair, really.’

One of the graves damaged belongs to Arthur Sheard, from Saltaire, who died aged 30 on May 22, 1918, at Morton Banks Military Hospital in Keighley after being injured in the field.

He was buried with full military honours alongside his four-year-old daughter Hilda Sheard, who died the day after her father. Mr Sheard’s headstone has been smashed into four pieces. 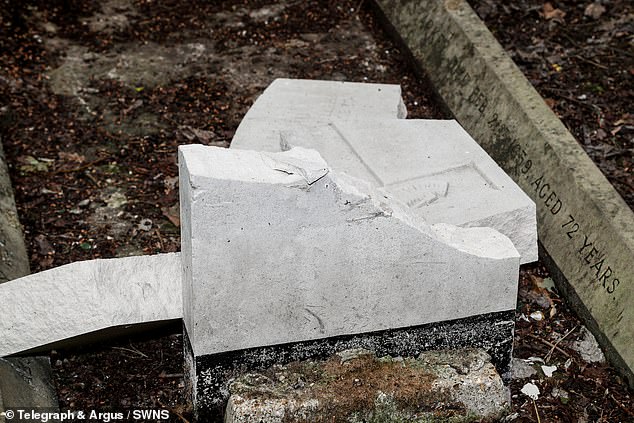 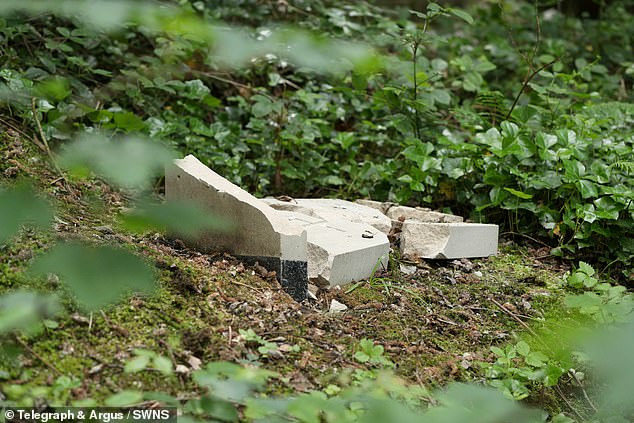 He had played a key role in the training of the Shipley Volunteer Corps and the Bradford Pals 1st Battalion following an extensive career in the mounted infantry.

Leading Aircraftman Frank Whittaker, who died on May 25, 1944, aged 40, is also buried at the site and his gravestone was smashed to pieces by vandals.

And the headstone commemorating Sgt Gunner Peter William Bilsborough, who died aged 21 on November 27, 1941, and was buried at sea, was pushed over.

He said: ‘It’s shocking any gravestones can be vandalised in this way, and it’s particularly shocking they are war graves on a day like today.

‘This is a totally unnecessary crime, it is quite sickening really.

‘What on earth makes someone want to do that? It is beyond comprehension.’

Detective Inspector Amanda Middleton, said: ‘The gravestones were destroyed in what was a mindless act of destruction and I would urge anyone with any information to come forward and speak to the police.

‘High visibility reassurance patrols have been stepped up in the area whilst officers continue with their inquiries.’