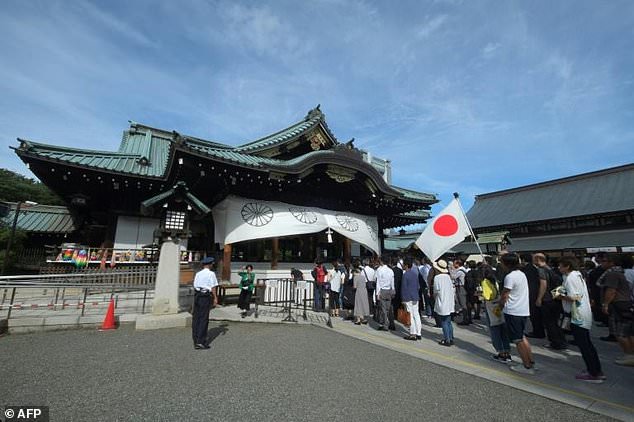 The chief priest at Japan’s controversial Yasukuni Shrine in Tokyo will quit after “highly inappropriate language” criticising the emperor was leaked to a magazine, the shrine said Thursday.

The shrine, which honours 2.5 million war dead but also enshrines top World War II criminals, has frequently been at the centre of rows with Asian neighbours that suffered from Japan’s wartime atrocities.

Senior Japanese politicians including Prime Minister Shinzo Abe have made appearances at the shrine but Emperor Akihito has never visited since his coronation in 1989, while his father Hirohito did not return to Yasukuni after war criminals were enshrined there in the mid-1970s.

In its latest issue, the Shukan Post weekly magazine quoted chief priest Kunio Kohori, 68, as saying at a closed-door meeting in June that “the emperor is trying to destroy Yasukuni Shrine”.

The more the emperor goes on memorial trips for the war dead, the more the Yasukuni Shrine’s position declines, he reportedly added.

Akihito, who will abdicate next year, has throughout his reign hinted at pacifist views, which are sharply at odds with the aggressive expansionism Japan pursued under his father’s rule.

He has visited several former battlefields in the Pacific islands to pray for soldiers and civilians who perished there.

Though he has no political power, the emperor has annoyed Japanese rightwingers by acknowledging that his country inflicted “great suffering” in China, and expressing regret over Japan’s brutal rule of the Korean peninsula.

The priest also reportedly said Crown Prince Naruhito and his wife Masako would probably not visit the shrine as the new emperor and empress.

In a statement obtained by AFP Thursday, the shrine said Kohori will resign from the post of chief priest, after “highly inappropriate language made in a meeting… was leaked.”

Kohori “directly visited the Imperial Household Agency and apologised over the issue and expressed his intention to resign” from the post, the shrine said.

A successor will be picked at a meeting later this month, the shrine said.

A shrine spokeswoman declined to confirm the reported comments but acknowledged the resignation was linked to the magazine article.

Lifeboat that saw action at Dunkirk painstakingly restored
Toronto-based heavy metal band splits in midst of cheating scandal
Police vehicles smash their way through Barcelona protestors' barricades on Las Ramblas
Expert reveals how to decorate Christmas tree and what you need to avoid so it doesn't look tacky
Mothers-of- three save £7,200 a YEAR by swapping their impulse buys for home-cooked meals
Labour WILL demand second referendum when May calls second Brexit deal vote
‘Several people are injured’ as ‘part of a roof collapses at Pontins holiday park in Somerset’
Croydon tram crash driver will NOT face manslaughter charges over 2016 tragedy