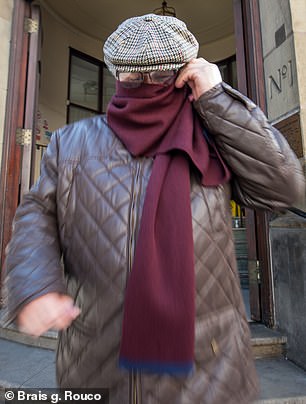 A TV reporter felt ‘targeted and intimidated’ when a Tommy Robinson supporter called her a ‘s**g’ and said her team was ‘Muslim-backed’, a court heard today.

The incident was recorded by broadcast journalist Sonia Gallego – whose colleagues were pelted with horse manure – and she later posted it to her Twitter page in a post that went viral.

Restaurant owner William Eve has admitted verbally abusing the journalist from the Al Jazeera channel during the march in Westminster on July 14 last year but today denied it was religiously aggravated.

The 57-year-old said he did not perceive swearing or using the word ‘slag’ as insulting because he was from east London where it was ‘common’ language.

Miss Gallego told City of London Magistrates’ Court said she had been on a break with a cameraman, producer and security advisor when Eve came towards them shouting: ‘Oi, who are you with?’

She said: ‘It was in quite an aggressive manner that got my attention. I looked up and the defendant was shouting at me, asking me who I was with.

‘I believe I was smiling, my response was “who are you with?” I was trying to take the aggression out of the situation by being light about it.

‘He demanded to know who I was with. He was pointing towards me in quite an aggressive fashion. 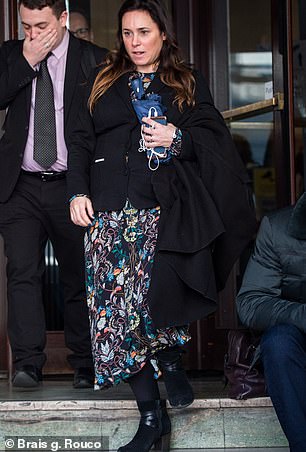 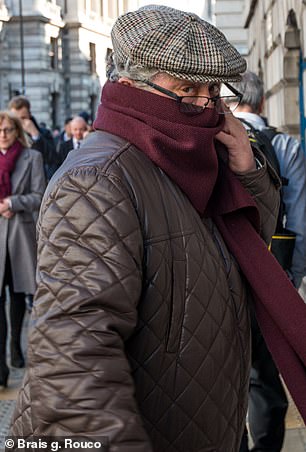 The journalist (pictured, left, leaving court today) told how Mr Eve (right, arriving at court this morning) said that her organisation was Muslim-backed

‘By this stage he was probably about three-quarters of a metre away from me.. I immediately felt like I was being targeted.

‘He demanded to know with whom I was with and I told him Al Jazeera, and he responded by saying “Ok, yeah, so you’re Muslim-backed”.

‘I thought it was an odd thing to pick up on. Given the context which we were reporting from, were there was Islamophobic rhetoric being bandied about – that did sort of signal to me that it was a little bit odd.’ 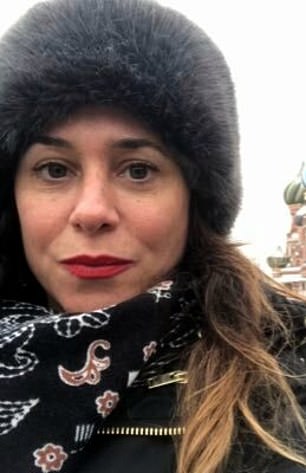 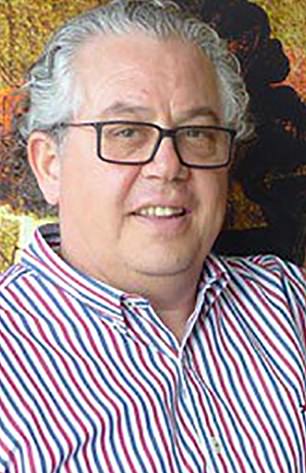 The journalist (pictured, left) said the defendant (pictured, right) told her that her news organisation was Muslim-backed

Miss Gallego said: ‘I did feel more threatened then because his temper appeared like it was rising. I was very worried it was going to escalate.

‘It’s already quite an intimidating situation. He took a step back and then took a step forward and said “you know what, you’re a slag”.

‘He walked away, I turned and saw the group of people he was with. Our personal security detail was saying ‘we should really get out of here, these guys are getting riled up’.

‘We were slowly moving out of the area we were in. Then from that direction we were then pelleted with horse manure.’

In his evidence, Eve told the court that after the barrage of abuse was posted to Miss Gallego’s Twitter page, he has faced ‘accusations of racism’ that has caused him problems.

Mr Eve said: ‘The saddest thing is I have been accused of being racist. And even worse is the problem this whole thing has caused. 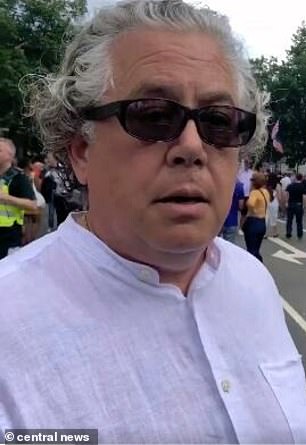 ‘I don’t live at home anymore because of this. My wife’s business has been demolished because of this – because Miss Gallego thought it would be good to put this incident up on Twitter’.

He claimed he was ‘not a racist’ because he had previously lived in Asia for 22 years and was friends with a ‘little Muslim guy who runs a greengrocers’ by his wife’s restaurant.

‘I never charged him. He’s a lovely little man. I have no problems with race.’

Thinking for several minutes where his friend was from, he eventually said: ‘I think he’s Bengali.’

Reminded by prosecutor Simon Maughan that he was not charged with using racist language but that the charge was religiously aggravated, Mr Eve said: ‘Because I mentioned a religion I’m being chastised. I really don’t understand – because I said the word Muslim I’m in court.’

Mr Eve said he did not perceive swearing or using the word ‘slag’ as insulting because he was from east London and that was common language.

He said: ‘I swore at her, well I didn’t swear at her it was just in the way that…I come from east London and everyone on the train coming here today I heard lots of people swearing.

‘On the TV everyone swears, uses profanity. It’s the way that most people speak nowadays. I didn’t mean to be rude.’

During the first viewing of the video Mr Eve, who wore a pastel green shirt and trousers, rolled his eyes to the ceiling and looked uncomfortable.

Mr Eve, of Rainham, east London, has admitted one count of using threatening, abusive or insulting words or behaviour to cause harassment, alarm or distress, but denies it was religiously aggravated. The bench has retired to consider its verdict.