A traffic jam of hundreds of climbers in the Everest ‘death zone’ has been blamed for two of four new deaths announced today.

The surge in climbers has come during a small window of clear weather before the short season ends, and has triggered bottlenecks of hundreds of wanting to summit before the end of May.

It was also revealed that Nepal has issued a record 381 climber permits, which cost $11,000 each, and has contributed to 200 adventurers traversing the north and south faces at the same time.

In the so-called death zone on Everest, above 28,000ft, there is not enough oxygen for a human body to survive for long. Climbers who get stuck above 28,000ft are certain to die. 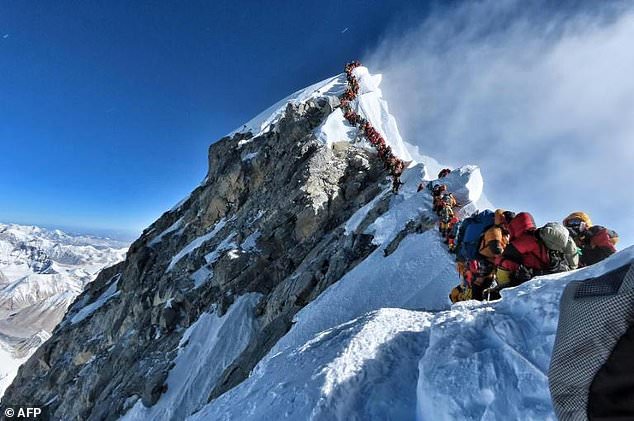 The four latest deaths reported on Friday, taking the toll from a deadly week on the overcrowded peak to eight, include two Indians and a Nepali on the Nepal side and an Austrian on the way down on the northern Tibetan side, officials and expedition organisers said.

Ang Tsering Sherpa, former president of the Nepal Mountaineering Association, said that the weather window to summit this season was narrow, meaning that many teams had to wait to go up. 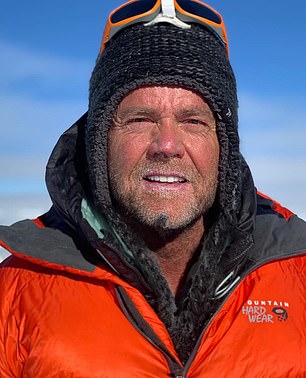 Donald Lynn Cash, 55, collapsed after reaching the summit of Everest. Two accompanying sherpa guides helped him to regain consciousness but he later died on the descent

‘Spending a long time above the death zone increases the risk of frostbite, altitude sickness and even death,’ he said.

Kalpana Das, 52, reached the summit but died on Thursday afternoon while descending, as a huge number of climbers queued near the top. The other Indian, Nihal Bagwan, 27, also died on his way back from the summit.

‘He was stuck in the traffic for more than 12 hours and was exhausted. Sherpa guides carried him down to Camp 4 but he breathed his last there,’ said Keshav Paudel of Peak Promotion.

A 33-year-old Nepali guide died at the base camp on Friday after he was rescued from Camp 3 for falling sick.

Wednesday claimed the lives of an American and another Indian.

Donald Lynn Cash, 55, collapsed while taking photographs after the summit.

After his collapse, Sherpas were initially able to perform CPR and managed to get him a short way down.

But just a few hours later Cash died from the effects of the altitude near the Hillary Step – a near-vertical rock face on the southeast ridge.

Cash was an experienced mountaineer and recently retired software salesman who was attempting to climb the Seven Summits – the highest peak on each continent.

Anjali Kulkarni, 55, died while descending after reaching the top.

Kulkarni’s expedition organiser, Arun Treks, said heavy traffic at the summit had delayed her descent and caused the tragedy.

‘She had to wait for a long time to reach the summit and descend,’ said Thupden Sherpa. ‘She couldn’t move down on her own and died as Sherpa guides brought her down.’ 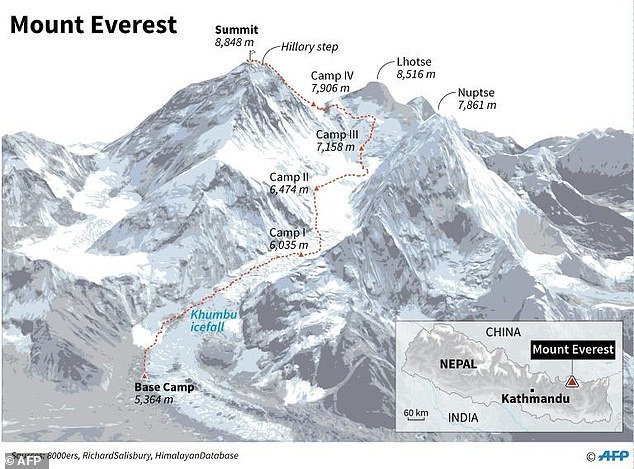 Pasang Tenje Sherpa, of Pioneer Adventure, told AFP that Cash collapsed on the summit and died close to Hillary Step as guides were bringing him back.

Last week, an Indian climber died and an Irish mountaineer went missing after he slipped and fell close to the summit and is presumed dead.

The Irish professor was in the same team as Saray Khumalo, 47, who this week became the first black African woman to climb Everest and who is hoping to conquer the highest summits on each of the seven continents.

Mountaineering in Nepal has become a lucrative business since Edmund Hillary and Tenzing Norgay made the first ascent of Everest in 1953. 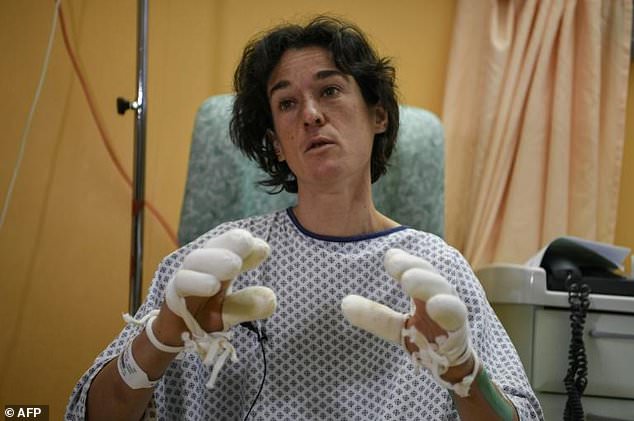 Most Everest hopefuls are escorted by a Nepali guide, meaning more than 750 climbers were expected to tread the same path to the top in the current season.

At least 140 others have been granted permits to scale Everest from the northern flank in Tibet, according to expedition operators. This could take the total past last year’s record of 807 people reaching the summit.

How does Everest kill people?

‘Altitude sickness’ refers to the group of potential dangers faced by high altitudes, and is also known as ‘mountain sickness’.

It is caused by gaining altitude too rapidly, which doesn’t allow the body enough time to adjust to reduced oxygen and changes in air pressure, and causes hypobaric hypoxia (a lack of oxygen reaching the tissues of the body).

In the so-called death zone on Everest, above 28,000ft, there is not enough oxygen for a human body to survive for long. Climbers who get stuck above 28,000ft are certain to die.

In severe cases, fluid builds up within the lungs, brain or both.

Symptoms of the illness include: headaches, lethargy, a lack of coordination, nausea, dizziness, vomiting, and insomnia.

‘About 550 climbers have summited the world tallest mountain by Thursday according to the data provided by expedition organizers to us,’ said Mira Acharya, spokeswoman for Nepal’s Tourism Department

Many Himalayan mountains — including Everest — are at peak climbing season, with the window of good weather between late April and the end of May.

Eight other climbers have died on other 8,000-metre Himalayan peaks this season, while two are missing.

In 2015, 18 people were killed at the Everest base camp because of an avalanche triggered by a quake.

The two want to force a rethink about the role of widows in their conservative community, after their husbands died on the world’s highest mountain.

‘We want to climb Everest with a message for widows and single women. We are not less than anyone, we are capable of achieving anything,’ Nima Doma said in an interview with AFP ahead of the expedition.