A transgender woman is facing disciplinary action for wearing a t-shirt proclaiming that she is biologically a man.

Debbie Hayton, 51, a physics teacher in the Midlands, changed her gender from male to female in 2012.

She is now potentially facing expulsion from the LGBT+ committee of the Trades Union Congress (TUC) after wearing a t-shirt saying ‘Trans women are men. Get over it.’

Ms Hayton wore the t-shirt at an event in July, organised by campaign group Fair Play for Women, as reported by The Sunday Times.

In August, 12 members of the committee sent a complaint about Ms Hayton to Frances O’Grady, the general secretary of the TUC. 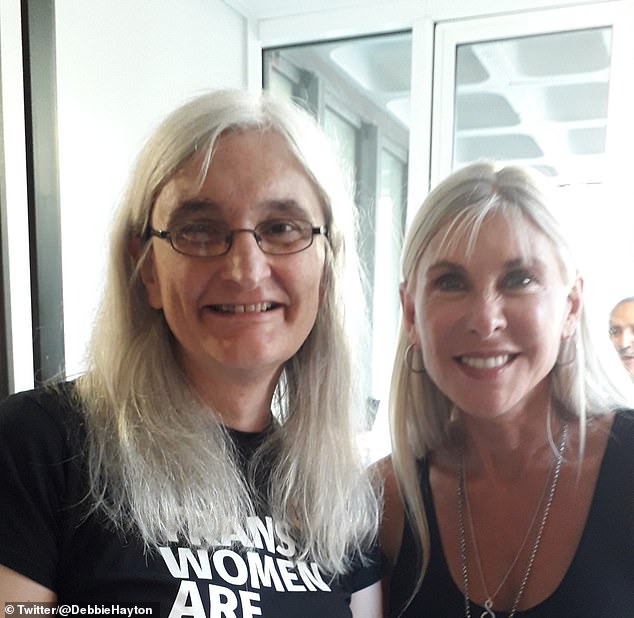 Debbie Hayton, 51, pictured left, a physics teacher in the Midlands, changed her gender from male to female in 2012

They said that by wearing the t-shirt Ms Hayton had ‘gone beyond discourse, and the expression of alternative viewpoints, and is now propagating hate speech against the trans community.’

Nicola Williams, founder of Fair Play for Women, told the newspaper: ‘Accusations of transphobia are thrown at women so often for so little that the word has lost all meaning.

‘When even trans people can get called transphobes, I hope people now understand how ludicrous and far-fetched these attacks have always been. The trans movement has been hijacked by gender extremists.’

The case comes shortly after an employment tribunal ruling last week upheld the dismissal of Maya Forstater, 45, over ‘offensive’ tweets questioning government plans to allow people to self-identify as another gender. 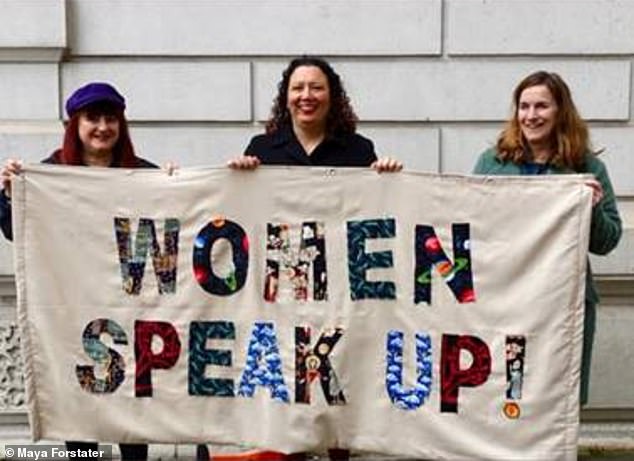 Miss Forstater, who is pictured with two fellow protesters in an undated photograph, was told that her views are ‘incompatible with human dignity and fundamental rights of others’ 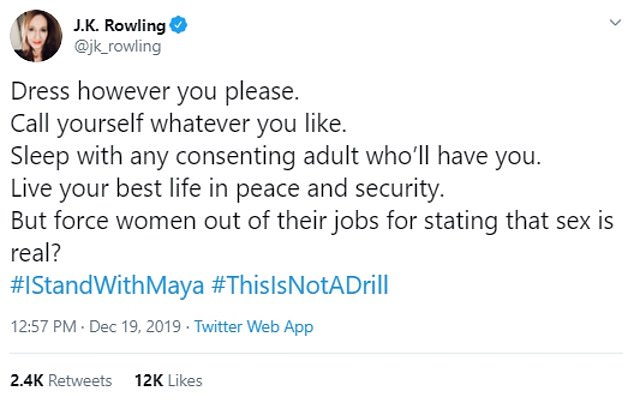 Harry Potter author J K Rowling posted using the hashtag, saying: ‘Dress however you please. Call yourself whatever you like. Sleep with any consenting adult who’ll have you. Live your best life in peace and security.

‘But force women out of their jobs for stating that sex is real? #IStandWithMaya #ThisIsNotADrill’.

Miss Forstater, who worked for the Centre for Global Development, was let go by the think tank after sharing her views on reforms to Gender Recognition Certificates.

The case was viewed as a test of whether gender critical views – that there are only two biological sexes and it is not possible to change between them – could be protected philosophical beliefs under the 2010 Equality Act.

Employment Judge James Tayler rejected that view in his landmark judgment, which said Miss Forstater’s views are ‘incompatible with human dignity and fundamental rights of others’.

A TUC spokesman told the Daily Telegraph: ‘The TUC is working with union representatives from across our elected LGBT committee to hear everyone’s perspectives and find a way forward.’

Tony Blair and John Major private secretary goes on trial accused of rape
More than 140,000 people were killed by measles last year
Mothercare is slammed for promoting 'sexy corsets' to women who have just given birth
Shisha smoke linked to diabetes and obesity in a major study
Gay journalist reveals chilling account of meeting Jordanian honour killing family
Holland Park: Police open fire on car racing towards Ukrainian embassy
Three men aged 17 to 21 arrested on terrorism charges
Delhi boasts its clampdown on Eid protests in Kashmir has been a success because 'no-one was shot'