The unidentified man was killed with a shot to the back at 4.30am in Brooklyn.

The victim was on Grant Avenue near Fulton Street in Cypress Hills when he was approached by three men, cops say. 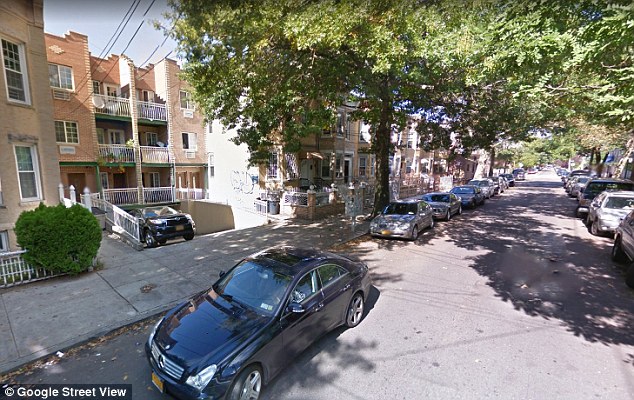 A 28-year-old Trinitarios gang member was shot dead in Brooklyn on Saturday at 4.30am. He was shot on Grant Avenue near Fulton Street in Cypress Hills, pictured above

One of the men then opened fire and killed him.

Authorities say the victim was involved in a dispute prior to the shooting.

The victim was found sprawled on the ground and rushed to Jamaica Hospital where he was pronounced dead. Police say the victim was a member of the Trinitarios gang, the same gang responsible for the June slaying of 15-year-old Lesandro ‘Junior’ Guzman-Feliz

His name was not immediately disclosed, pending family notification.

Cops say that the victim was a member of the notorious gang Trinitarios, the same group that was responsible for the machete murder of a Bronx teenager, according to the New York Daily News.

The horrific slaying was caught on a boedga’s surveillance camera and shows a group of men dragging Lesandro ‘Junior’ Guzman-Feliz out of the shop then slashing him with a machete and a knife, leaving him for dead.

The 12 vicious attackers have been arrested. and charged with murder, gang assault and manslaughter.

Following his murder a gang member came forward saying Junior was killed in a case of mistaken identity. He was targeted after the gang believed he was captured on camera having  sex with a gang leader’s female relative.

But, according to the New York Post, Bronx DA Darcel Clark said that was not the case.