Donald Trump has deemed a journalist for GQ Magazine a ‘sick women’ after she made a comment that the president has ‘radicalized more people than ISIS‘ while appearing on a CNN panel.

‘Well, that must be some kind of a sick woman,’ the president said of journalist Julia Ioffe during Monday night’s sit down interview with FOX News host Laura Ingraham.

Ioffe, discussing the Pittsburgh synagogue mass shooting earlier in the day on a CNN panel with Jake Tapper, said: ‘I think this president, one of the things that he really launched his presidential run on is talking about Islamic radicalization. This president has radicalized so many more people than ISIS ever did.’

At the end of the segment, the 36-year-old apologized for her ‘exaggerated’ comments, saying she was speaking in the ‘heat of the moment’.

But the damage was done, and Ingraham and Trump seized upon Ioffe’s words to label CNN the ‘enemy of the people’ once again. 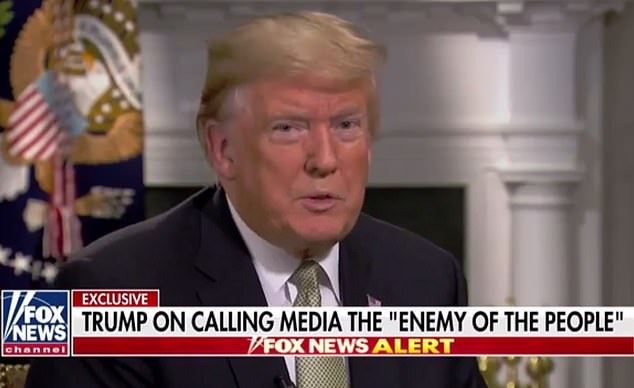 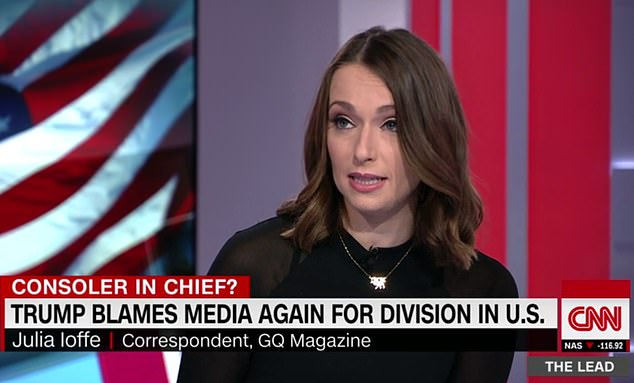 Earlier in the day, Ioffe said Trump has radicalized ‘more people than ISIS’ while appearing on a CNN panel to discuss the Pittsburgh synagogue mass shooting

After walking back her comments on air, Ioffe reiterated her apology on Twitter, saying: ‘I clarified and apologized on air, but I’ll say it again here. This has been a very emotional and painful time, but I absolutely should not have gone with such hyperbole on the air. I apologize.’

‘I will add, though, that it is not a coincidence that the number of anti-Semitic attacks has jumped nearly 60% in 2017—the biggest one-year increase in recent history—while this administration has systematically pulled back resources from countering domestic extremism,’ she said in a second tweet.

Laura Ingraham asked Trump about Ioffe’s comments, to which he answered: ‘Well, that must be some kind of a sick woman. When I say ”the enemy of the people” I’m talking about the fake news and you know it better than anybody.’

He then went on to praise his work with North Korea, saying: ‘You have news out there that is so fake and I can do the greatest thing ever, North Korea, as an example.’

Ioffe is a Jewish journalist who was forced to file a police report in May 2016 after she received death threats when she profiled Melania Trump, revealing the first lady had a secret half-brother in Slovenia.

She was speaking on CNN’s panel in response to the White House defending Trump’s rhetoric in the wake Saturday’s mass shooting that left 11 dead at a Pittsburgh synagogue.

Ioffe, a Jewish GQ Magazine correspondent, walked back her comments on air and again on Twitter 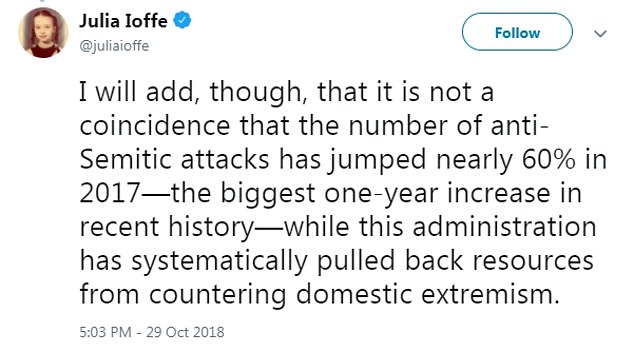 Ioffe is no stranger to making comments – sometimes vulgar ones – aimed at the president.

In December 2016, she posted an obscene tweet about then-president elect Trump and his daughter Ivanka’s relationship that got her pushed out of her contributor job at Politico.

‘Either Trump is f**king his daughter or he’s shirking nepotism laws,’ Ioffe wrote in a tweet, along with a link to a news report claiming Ivanka Trump would be using White House office space typically reserved for the first lady.

Ioffe later deleted the tweet and apologized, but was axed from Politco early, bringing her contract to a premature close before she left for The Atlantic.

Politico leadership responded with a scolding message that her contract has been terminated effective immediately.

Meanwhile, President Trump continues to brand the ‘Fake News Media’ the ‘Enemy of the People as the midterm elections near. 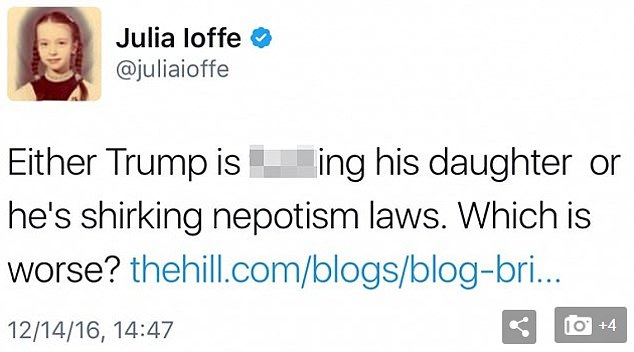 The lives of these adorable creatures were transformed by the help of selfless animals
Father, 40, recovering from self-inflicted knife wounds is arrested for murder of his children
Scientists urgently call for a coronavirus app to track who coronavirus patients
Bill Clinton insists he had no idea about Jeffrey Epstein's 'terrible crimes'
The birth certificate that reveals Atlanta rapper 21 Savage WAS born in the UK
Robbie Williams and Ayda Field's VERY intimate look at their marriage
Johanna Konta misses out on French Open final after defeat to Marketa Vondrousova
JAN MOIR on the BBC's new take on the Victor Hugo classic Les Mis