WASHINGTON (AP) – President Donald Trump is making another hardline immigration play in the final days before midterm elections, declaring that he wants to order an end to the constitutional right to citizenship for babies born in the United States to non-citizens.

With seven days to go before high-stakes elections that he has sought to focus on fearmongering over immigration, Trump made the comments to “Axios on HBO.” Trump, seeking to energize his supporters and help Republicans keep control of Congress, has stoked anxiety about a caravan of Central American migrants making its way to the U.S.-Mexico border. He is dispatching additional troops and saying he’ll set up tent cities for asylum seekers.

The president has long called for an end to birthright citizenship, as have many conservatives. An executive order to revoke the right would spark a court fight over whether the president has the unilateral ability to change an amendment to the Constitution. The 14th Amendment guarantees that right for all children born in the U.S.

Asked about the legality of such an executive order, Trump said, “they’re saying I can do it just with an executive order.” He added that “we’re the only country in the world where a person comes in and has a baby, and the baby is essentially a citizen of the United States,” though a 2010 study from the Center for Immigration Studies showed that 30 countries offered birthright citizenship.

An excerpt of the interview was posted on Axios’ website on Tuesday.

The president said White House lawyers are reviewing his proposal. It’s unclear how quickly he would act and the White House did not provide further details. 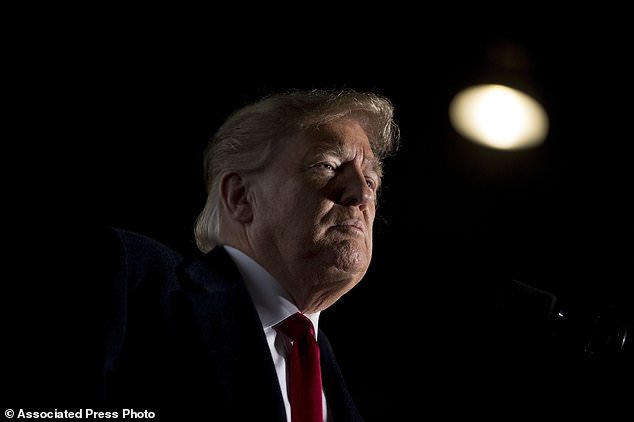 FILE – In this Oct. 27, 2018, file photo, President Donald Trump pauses while speaking at a rally at Southern Illinois Airport in Murphysboro, Ill. Trump says he wants to order the end of the constitutional right to citizenship for babies of non-citizens and unauthorized immigrants born in the United States. The president’s comments to “Axios on HBO” come amid a renewed push for hardline immigration policies in the lead-up to the midterm elections. (AP Photo/Andrew Harnik, File)

A person familiar with the internal White House debate said the topic of birthright citizenship had come up inside the West Wing at various times over at least the last year, but has some internal detractors. White House lawyers have debated the topic, and expect to work with the Justice Department’s Office of Legal Counsel to develop a legal justification for the action. It is one of many immigration changes being discussed including asylum law changes, and barring the migrant caravan from entering the country.

But administration officials said there would likely be no decisions until after the midterms, due in part to the president’s trip to Pittsburgh.

Legal experts questioned whether Trump has the authority to do this by executive order.

Omar Jadwat, director of the Immigrants’ Rights Project at the American Civil Liberties Union in New York, said Tuesday that the Constitution is very clear.

“If you are born in the United States, you’re a citizen,” he said, adding that it was “outrageous that the president can think he can override constitutional guarantees by issuing an executive order,

Jadwat said the president has an obligation to uphold the Constitution. Trump can try to get Congress to pass a constitutional amendment, “but I don’t think they are anywhere close to getting that.”

“Obviously, even if he did, it would be subject to court challenge,” he added.

Suzanna Sherry, a professor of law at Vanderbilt Law School specializing in constitutional questions, said those advising Trump that he can change the Constitution via executive order are simply mistaken. “He can’t do it by himself and, in fact, he can’t do it even if Congress passed a statue.”

“I think it would take a Constitutional amendment,” she said. “I don’t see it as having any plausible legal basis,” she said.

But others suggest the president may have an opening.

Jon Feere, a senior adviser at Immigration and Customs Enforcement, is among those who has long argued that that the president could limit the citizenship clause through executive action.

“A president could direct his agencies to fall in line with his interpretation of the Supreme Court’s rulings, which are arguably limited to children of permanently domiciled immigrants (the court has never squarely ruled on children born to tourists or illegal aliens). He could direct his agencies to issue Social Security numbers and passports only to newborns who have at least one parent who is a citizen or permanently domiciled immigrant,” he wrote in 2015 in an op-ed in the Hill.

In the final days before the Nov. 6 midterms, Trump has emphasized immigration, as he seeks to counter Democratic enthusiasm. Trump believes that his campaign pledges, including his much-vaunted and still-unfulfilled promise to quickly build a U.S.-Mexico border wall, are still rallying cries for his base and that this latest focus will further erode the enthusiasm gap.

The first line of the 14th Amendment states: “All persons born or naturalized in the United States, and subject to the jurisdiction thereof, are citizens of the United States and of the state wherein they reside.”

The 14th Amendment was passed by Congress in 1866 during the period of Reconstruction after the Civil War. It was ratified in 1868 by three-fourths of the states. By extending citizenship to those born in the U.S., the amendment nullified an 1857 Supreme Court decision (Dred Scott v. Sandford), which ruled that those descended from slaves could not be citizens.

Republicans in Congress continue introducing bills to end birthright citizenship, including legislation this session from conservative GOP Rep. Steve King of Iowa who has aligned himself with some nationalist political leaders abroad. King’s bill has almost 50 co-sponsors in the House. King’s legislation though would likely face a cool reception in the Senate where there is no companion bill pending, and a handful of senators supported past efforts.

King said he had not discussed the issue with the president at any length in recent months, but that it had come up “in passing” several times in group discussions. He said he hadn’t personally considered birthright citizenship to be part of the caravan issue and applauded the president for connecting the issues.

“Sending this message out, it’s another component of saying to the caravan: Don’t come in here. Some are pregnant, no doubt,” he said. 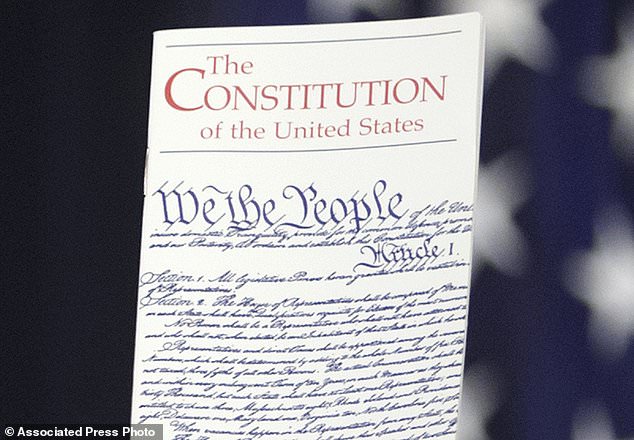 FILE – In this March 23, 2016 photo, the Constitution is held by a member of Congress on Capitol Hill in Washington. President Donald Trump says he wants to order the end of the constitutional right to citizenship for babies of non-citizens and unauthorized immigrants born in the United States. (AP Photo/J. Scott Applewhite) 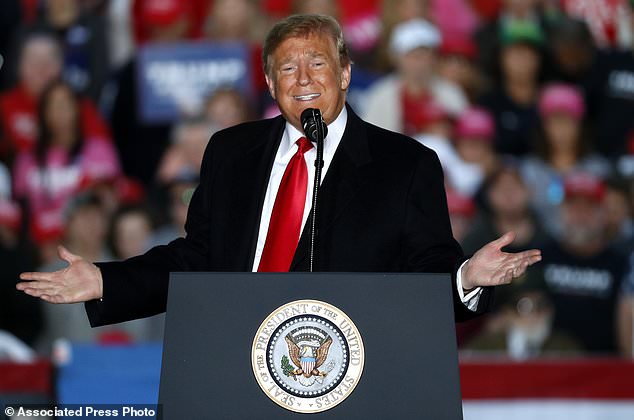 In this Oct. 27, 2018, photo, President Donald Trump speaks during a rally at Southern Illinois Airport in Murphysboro, Ill. Eager to focus voters on immigration in the lead-up to the midterm elections, Trump on Oct. 29 escalated his threats against a migrant caravan trudging slowly toward the U.S. border as the Pentagon prepared to deploy thousands of U.S. troops to support the border patrol. (AP Photo/Jeff Roberson)

Facebook buys company developing a wrist-strap to read your MIND
Gambino crime boss Franky Cali shook his hitman's hand before he was shot and killed
Joe Biden crushes Bernie Sanders with crucial victory in Michigan
Man banned from pub for 24 hours after having a single beer on the way to the venue
Fewer than HALF of UK students support freedom of speech, polls finds
Kate Middleton visits women's prison on 24-hour post-Megxit tour of Britain
Facebook back up and running after 8 HOUR global outage, but issues persist with Instagram, Whatsapp
Gunman who 'killed Gambino crime boss' had secret Instagram where he posted pro-Trump and Nazi posts