President Donald Trump said he allowed Turkish and Kurdish forces to clash in deadly battles because the two sides were like children who needed to fight each other.

The president was speaking at a rally in Dallas last night when he boasted about the ceasefire brokered by Vice President Mike Pence in Turkey.

But despite the five-day peace deal agreed yesterday, the deal was already broken by this morning when fighting continued in a Syrian border town.

The military action comes as images of burned children emerged yesterday, appearing to show weapons such as napalm and white phosphorus being used on civilians.

‘It was unconventional what I did. I said they’re going to have to fight a little while,’ Trump told a rally of supporters in Texas.

‘Like two kids in a lot, you have got to let them fight and then you pull them apart.

‘They fought for a few days and it was pretty vicious.’

Trump triggered the week-long Turkish offensive against the Kurds by withdrawing US troops from northeast Syria. 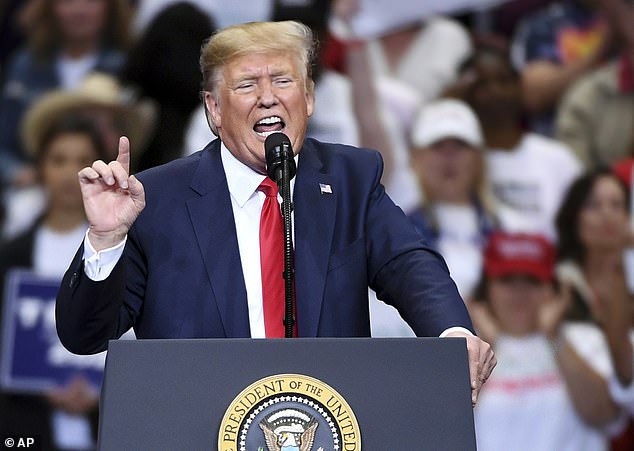 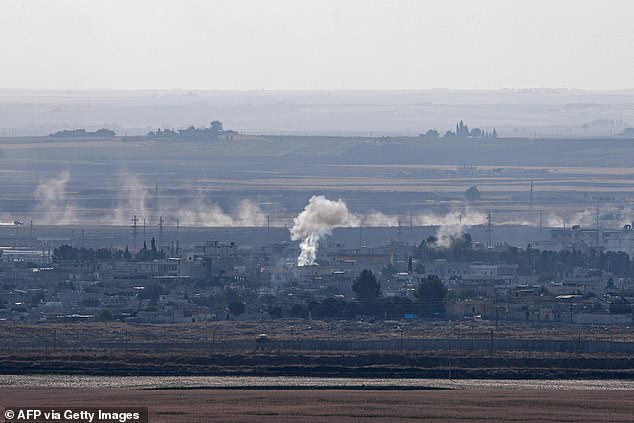 Sporadic clashes between Turkish forces and Kurdish groups were ongoing in a battleground Syrian border town of Ras al-Ain (pictured this morning), despite Ankara’s announcement of a five-day truce yesterday

More than 500 people have been killed including dozens of civilians, mostly on the Kurdish side, and 300,000 civilians have been displaced within Syria, according to the Syrian Observatory for Human Rights war monitor.

Trump stressed that ‘not one drop of American blood’ was shed.

Yesterday, Turkey – after talks with Vice President Mike Pence – agreed to suspend its offensive and to end the assault if Kurdish-led forces withdraw from a safe zone along the border.

‘We went there and we said we want a pause, and the Kurds have been terrific. They’re going to move back a little bit,’ Trump said.

Yesterday Trump hailed the success of the peace agreement as a ‘great day for civilization’ despite Turkish officials down playing the outcome of the deal. 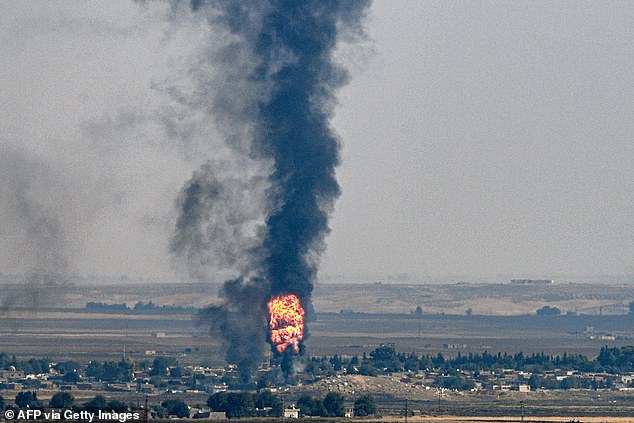 Pence announced the US and Turkey reached a deal to suspend Ankara’s operations in northern Syria for five days to allow Kurds time to withdraw to a ‘safe zone’.

Along with Secretary of State Mike Pompeo, Pence spent more than four hours meeting with Turkish President Recep Tayyip Erdogan and other officials in Ankara in order to get a deal.

Turkish officials down played the agreement, saying they agreed to suspend operations to let the Kurds withdraw and emphasized it was ‘not a ceasefire’.

And within 13 hours of the announcement, shelling and smoke could be seen around the town of Ras al-Ayn this morning.

The city, also known as Sari Kani, has been the center of the majority of the fighting since Turkish President Erdogan invaded the country more than a week ago after President Trump ordered US troops to withdraw.

Trump has already faced accusations even from usually loyal supporters that his withdrawal of 1,000 US troops betrayed Kurdish militants who bore the brunt of the fight against Islamic State in recent years. 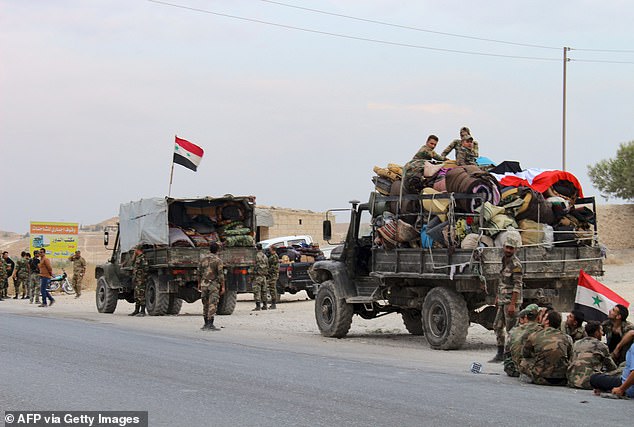 ‘200k innocent people displaced. Hundreds dead. Credible reports of war crimes. ISIS prisoners escaping. US evacuating and bombing its own positions or handing them to Russia. Two kids in a lot?’ he said on Twitter.

After the peace deal was announced the White House repeatedly touted the fragile five-day ceasefire.

Trump told the crowd at the campaign rally, the deal was the product of ‘a gentleman’ – Turkish president Recep Tayyip Erdogan – seeing his own self-interest after ‘a little tough love’ in the form of a week of armed conflict.

‘American combat troops should not be at the center of ancient sectarian conflict all over the world,’ he said. ‘Bring our soldiers back home.’

He then described the American death toll from what he called ‘stupid, senseless, endless wars’.

Romanian ADMITS 2013 hammer murder in Bosham, Sussex
Creepy patent suggests Facebook wants to use your pictures to help advertisers target your friends
Ex-minister Nick Boles says he's had a DEATH THREAT for vowing to fight no-deal Brexit
Carers of vulnerable woman deny abducting and murdering her to 'rake in £182,000 in benefits'
Robots given a sense of humour could KILL because they think think it's funny
Harry Dunn's family will sue US diplomat's wife Anne Sacoolas and Trump's White House
Coronation Street crisis: ‘Poor wages and exhausting hours to blame for mass exodus’
Doctors and nurses join Extinction Rebellion demo at Shell's London HQ