A treasure trove of Egyptian artefacts found in Tutankhamun’s tomb is being shipped to London where it will be showcased in the UK for the last time.

Jewellery, weapons and statues belonging to the boy king comprise the largest collection of his treasures to ever go on display, in celebration of the 100-year anniversary since the ancient ruler’s burial site was discovered.

Some 160 artefacts will form the Treasures Of The Golden Pharaoh exhibition at the Saatchi Gallery from November 2, 2019 to May 3, 2020.

The British capital is the third of 10 cities on the worldwide tour which will conclude at the Grand Egyptian Museum near the pyramids of Giza where the collection will remain forever.

The items have been uninstalled from Paris’s Grande Halle de la Villette, where they were on display from March to September and drew more than 1.4million visitors, making it France’s most-visited exhibition of all time. 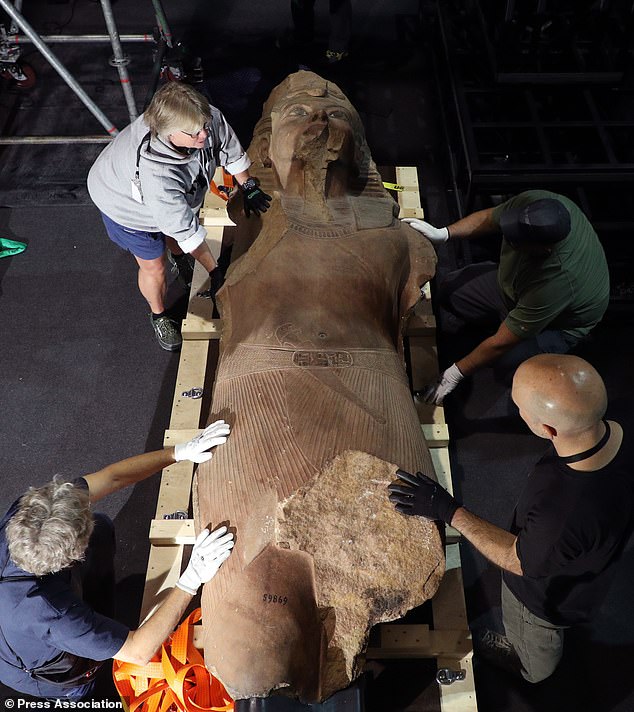 Technicians at the Grande Halle de la Villette in Paris pack the Colossal, the largest artefact in the exhibition 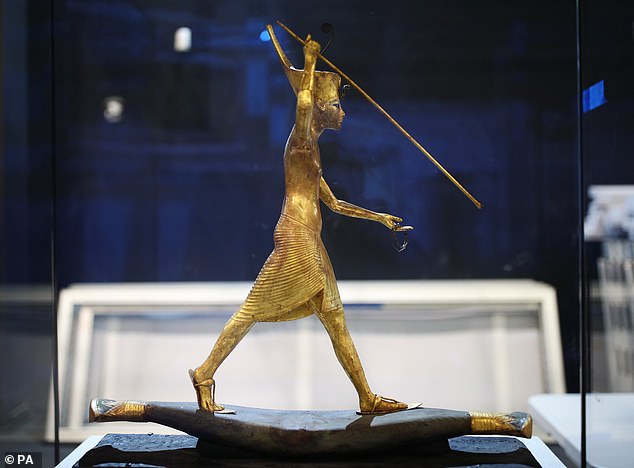 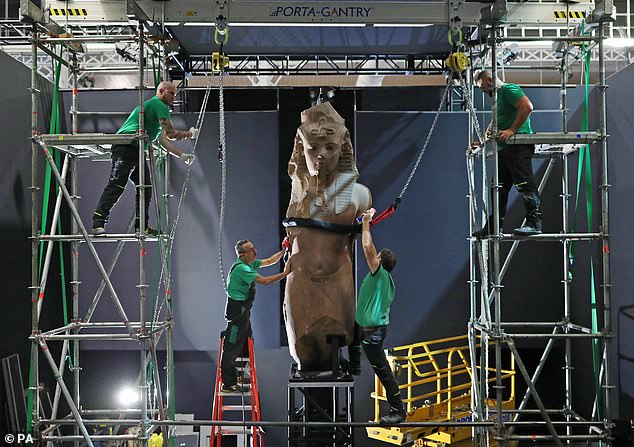 A mammoth pack-up operation in Paris has now concluded, and shortly the items will arrive in the UK, the third city on the worldwide tour

Weighing a total of 15.6 tonnes, the artefacts have travelled in custom-built inner crates and outer crates to ensure there is no movement while in transit.

The items require 48 hours to acclimatise after being transported before the crates are opened, and there are specific controls for temperature and light inside the exhibition cases to keep them in top condition.

Egyptian restorers have been embedded with the team throughout the tour, and one has remained with the artefacts in all locations and while they are travelling.

Museums consultant and collections manager Jackie Hoff said: ‘I’ve got 25-plus years’ experience doing this, and this is the most complex show I’ve ever dealt with.

‘The size of the material, the status and preciousness of everything, the fragility of every single piece, it really takes a lot of time, a lot of effort and a lot of communication and co-ordination to pull it all off.’

Egyptologist Dr Chris Naunton said: ‘Visitors to the exhibition, when it arrives in London, are going to see a cleverly-selected series of items relating to Tutankhamun’s life.

‘[They will also relate to] the moment of his death and what happens to the burial, the body and the tomb, and ultimately what happens to Tutankhamun – in the Egyptian mindset – in the afterlife as well. 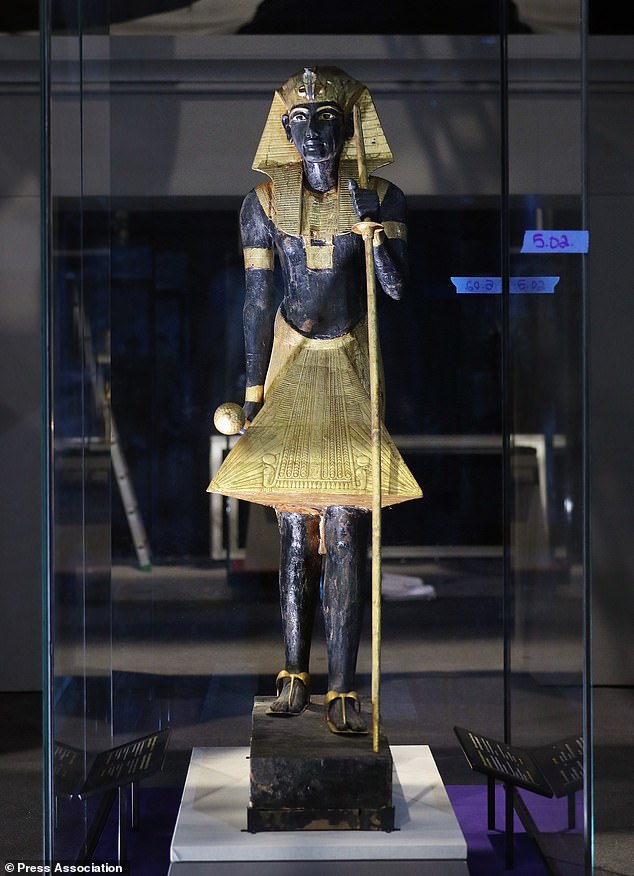 A wooden guardian statue of the Ka of the King wearing the Nemes headcloth, shown in Paris’s Grande Halle de la Villette 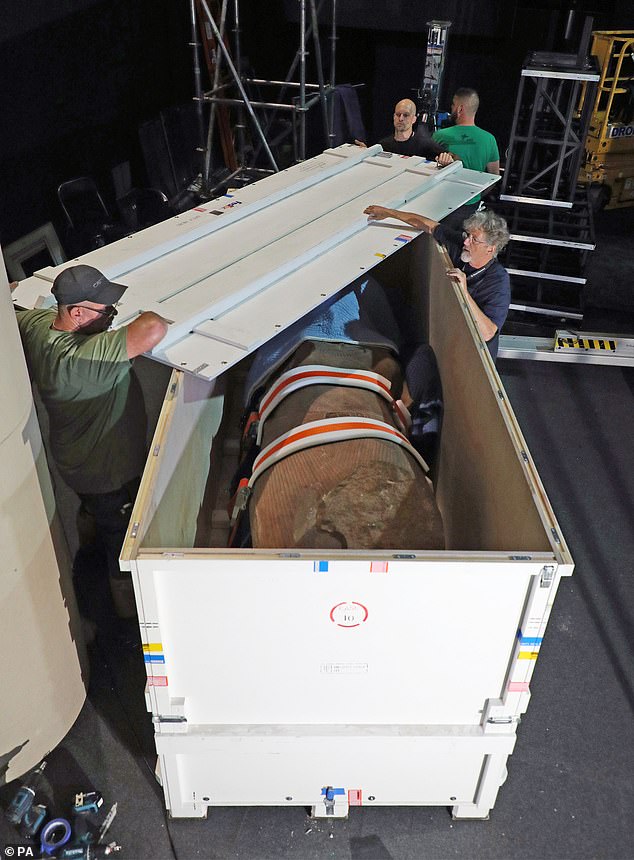 Technicians pack the Colossal, which is among the 160-piece treasure collection that attracted over 1.4million visitors in Paris

‘Visitors will see everything from trappings that were placed on the mummy, jewellery that was placed on the body, items that might have been associated with activities he was involved in had he gone into battle – daggers, arrows, shields, boxes for furniture, clothing.

‘It’s the full range of things that somebody of his status would have had in life and taken with him to the afterlife.’

Among the items display are a life-sized wooden guardian statue of the king and a miniature canopic coffin that formed part of the mummification process.

There is also a gilded wooden bed, a ceremonial item which is believed to have been created for Tutankhamun’s funeral to keep evil forces at bay.

Tutankhamun, who ascended to the throne as a child in 1333BC, frail and with numerous health complaints, was buried in the Valley of the Kings. 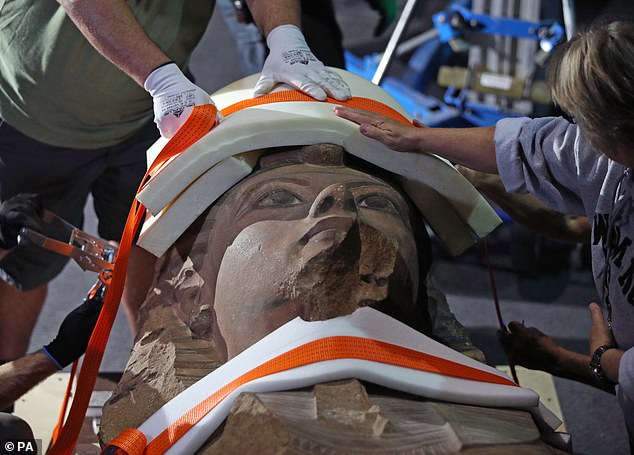 Egyptian restorers have been embedded with the team throughout the tour, and one has remained with the artefacts in all locations and while they are travelling 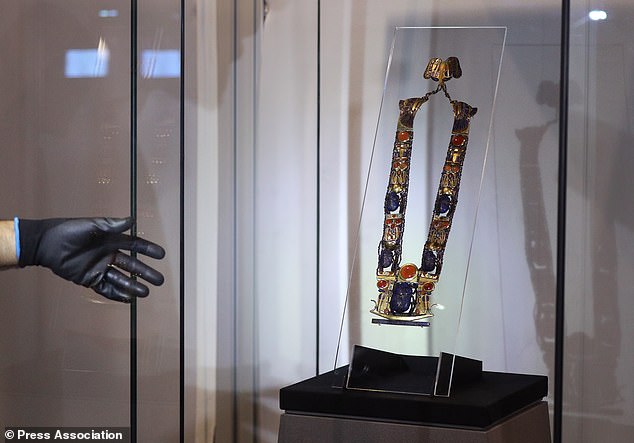 A gold inlaid pectoral chain, and counterpoise with Lapis scarab flanked by Uraei is removed from its display case

The young pharaoh’s tomb was discovered by British archaeologist Howard Carter in 1922, more than 3,000 years after his death, in an expedition financed by Lord Carnarvon.

The landmark discovery of the tomb filled with royal treasures brought to light almost perfectly-preserved artefacts from a vanished civilisation, and it has captivated the world ever since.

Following the tour, produced by the Egyptian Ministry of Antiquities and IMG, the funerary objects will return to the land where the pharaoh was laid to rest.

Previous London-based exhibitions of objects from Tutankhamun’s tomb in 1972 and 2007 drew huge crowds and, due to high demand for the forthcoming show, the organisers have announced extended morning and evening session tickets for the opening weeks of the exhibit.

In addition to the extended hours, there will be a programme of ‘lates’, which will take place on the penultimate Friday of November and December and will include drinks and music. 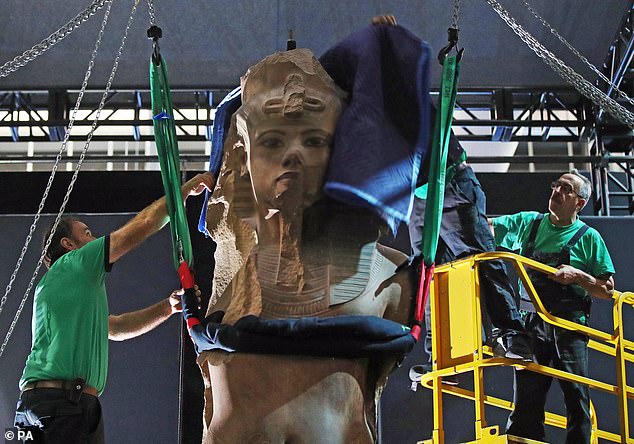 The items require 48 hours to acclimatise after being transported before the crates are opened, and there are specific controls for temperature and light inside the exhibition cases to keep them in top condition 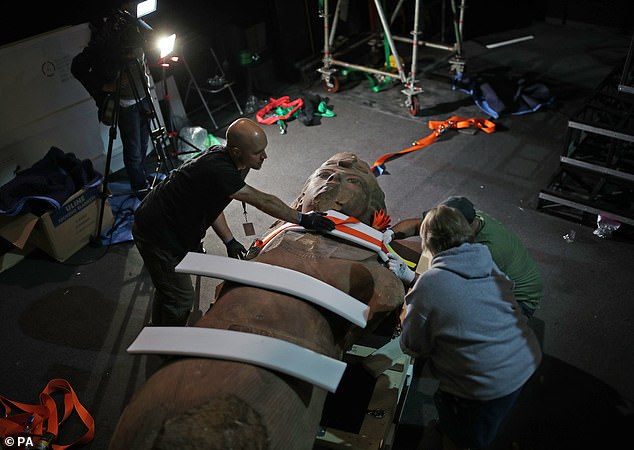 Weighing a total of 15.6 tonnes, the artefacts have travelled in custom-created inner crates and outer crates to ensure there is no movement while in transit

WHO WAS KING TUTANKHAMUN AND HOW WAS HIS TOMB DISCOVERED?

The face of Tutankhamun was an Egyptian pharaoh of the 18th dynasty, and ruled between 1332 BC and 1323 BC. Right, his famous gold funeral mask

Tutankhamun was an Egyptian pharaoh of the 18th dynasty, and ruled between 1332 BC and 1323 BC.

He was the son of Akhenaten and took to the throne at the age of nine or ten.

When he became king, he married his half-sister, Ankhesenpaaten.

He died at around the age of 18 and his cause of death is unknown.

In 1907, Lord Carnarvon George Herbert asked English archaeologist and Egyptologist Howard Carter to supervise excavations in the Valley of the Kings.

He spent several months cataloguing the antechamber before opening the burial chamber and discovering the sarcophagus in February 1923.

When the tomb was discovered in 1922 by archaeologist Howard Carter, under the patronage of Lord Carnarvon, the media frenzy that followed was unprecedented.

Carter and his team took 10 years to clear the tomb of its treasure because of the multitude of objects found within it.

For many, Tut embodies ancient Egypt’s glory because his tomb was packed with the glittering wealth of the rich 18th Dynasty from 1569 to 1315 BC.

Egypt’s antiquities chief Zahi Hawass (3rd L) supervises the removal of the lid of the sarcophagus of King Tutankhamun in his underground tomb in the famed Valley of the Kings in 2007.

Could Nigel Farage still cost Boris Johnson victory at the general election?
Police probe is launched after schoolboy, 13, is found dead in south Wales river
Former Bake Off star Sue Perkins compares Prime Minister Theresa May to ‘s*** on a shoe’
Single 'superdad' heartbroken by sudden death of his youngest son, two
Engagement parties are on the up as British brides adopt American traditions
May will make a 'bold offer' to Labour MPs in last-gasp attempt to get her Brexit deal over the line
Sex mad Torquay duck forced to have penis removed after infection trying to mate 10 times a day
Malaysia's Anwar, seeking return, vows support for...