A violent thug punched a news anchor in the face half-way through his report on an aggressive feminist ‘glitter protest’.

Juan Manual Jimenez fell to the ground after the protester slammed his fist into the journalist’s face as he reported for the TV network ADM 40 in Mexico City on Friday.

Footage of the protest shows demonstrators, who were calling for stronger laws protecting women from the threat of sexual assault, throwing glitter in to Mr Jimenez’s face. Around 500 people are thought to have joined the protest. 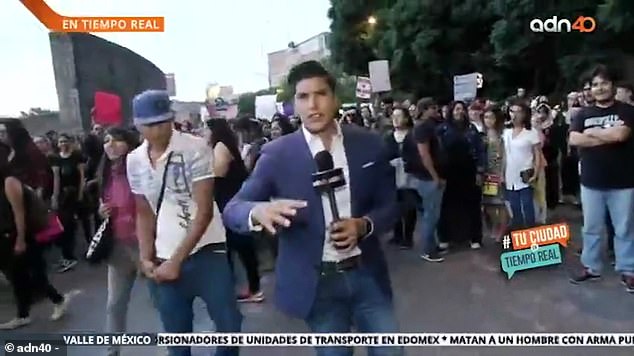 A fistful of pink glitter was thrown at the police chief, sparking widespread use of the substance. Mr Jimenez says in Spanish: ‘[The protesters] are throwing things at people who are trying to help them through different ways, the media.’

A woman who is holding hands with a little girl shouts in to the reporter’s microphone. She says: ‘Yo si te creo.’ Roughly translating to ‘I believe you,’ protesters are siding with two teenage girls who have accused police officers of rape. 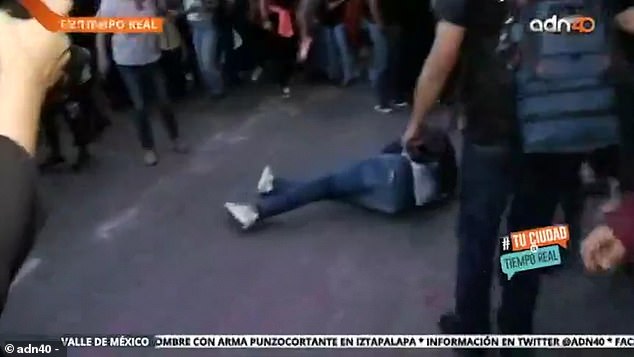 Mr Jimenez is knocked out by the punch and lays on the ground. He received medical attention and is now recovering

Suddenly, the man launches his right fist in to Mr Jimenez’s face, knocking him out and causing him to fall on to the concrete.

As the reporter lies on the ground women throw glitter at his attacker, grab at his clothes, and try to hold on to him. The TV camera follows the man as he runs through the crowds in a bid to escape.

Following the attack Mr Jimenez, who received treatment for his injuries, tweeted: ‘Violence will always be unacceptable.’

Another clip shows Melissa del Pozo de Milenio, a reporter for Milenio Televisione Network, being grappled by a woman wearing all black, as more women behind them appear to stab at a sign with sharp knives. 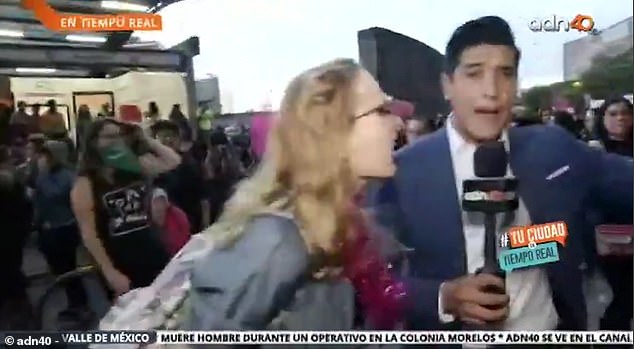 A woman who is holding hands with a little girl shouts in to the reporter’s microphone. She says: ‘Yo si te creo.’ Roughly translating to ‘I believe you’ 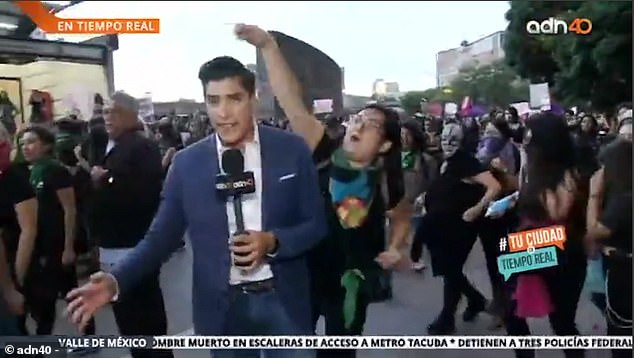 Glitter is thrown over Mr Jimenez. Women took to the streets of Mexico City yesterday in what has been dubbed a ‘glitter protest’

Women took to the streets of Mexico City yesterday in what has been dubbed a ‘glitter protest’. The city’s police chief was doused in pink glitter and protesters throw the glitter in to the air as they call for a change to sexual offence laws.

Their laws are said to ‘contradict international standards’ and Human Rights Watch say they ‘do not adequately protect women and girls against domestic and sexual violence’.

The level of punishment given for a sexual offence currently depends on how sexually available a victim is considered. 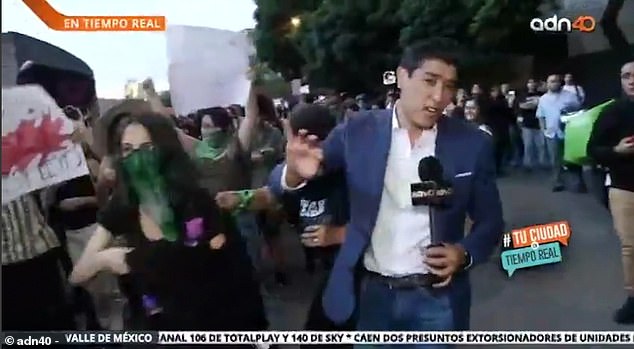 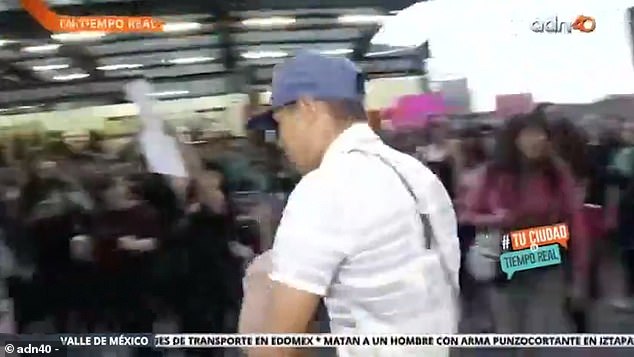 The protests began after two teenage girls claimed they had been raped by police officers in separate incidents. A 17-year-old girl said four policemen raped her in their patrol car, and a 16-year-old said a policeman raped her in a museum.

The rally, which began peacefully, ended with the second floor of a police building being set ablaze. A bus station was also vandalised.

Mexico City’s mayor Claudia Sheinbaum, the city’s first female mayor, tweeted at the city’s attorney general’s office saying: ‘I requested the @PGJDF_CDMX intensify your investigations and actions that lead to the arrest of the aggressors to journalists yesterday.’